TripAdvisor, as we know it is the travel industry’s top dog, it is the most important platform which influences the decision-making process.

From reviews on hotels to comparisons on restaurants and excursions, it has become a platform people have become very reliant on, in fact the majority of travellers are not willing to book a hotel until they go on TripAdvisor and read their reviews.

However, many argue that there are some major flaws to this service, the major one being that some TripAdvisor reviews may be fake – with easy access to it anyone can make a profile and lie.

TripAdvisor prides itself on being a reliable and useful source for tourists and travellers around the world, their slogan clearly states “Get the truth, then go”.

This is the world’s largest review website, but is it the most reliable?

If you log on to TripAdvisor and search slanderous terms such as “racism” or even “pervert” together they come up about 2,300 times in reviews which are used to describe hotel and restaurant staff, waiters and receptionists.

“Rapist among the staff,” wrote one reviewer of a hotel in Egypt. “Rapist waiter, awkward overcooked food,” said another of a restaurant in a Barcelona hotel. “Perverts all the waiters,” another claimed.

Can we classify all these reviews are ‘true’ and ‘reliable’? All that someone needs to put up such comments in an anonymous username and an e-mail address, so how dependable can TripAdvisor reviews be?

As an alternative to brochures and guidebook reviews, travellers suddenly have access to real accounts, from people paying real money to visit these places.

Last month for example, TripAdvisor became the first travel website that had more than 40 million unique visitors each month.

TripAdvisor is also very popular amongst small hotels and B&Bs, some of whom have been given high exposure due to the amount of positive reviews written. 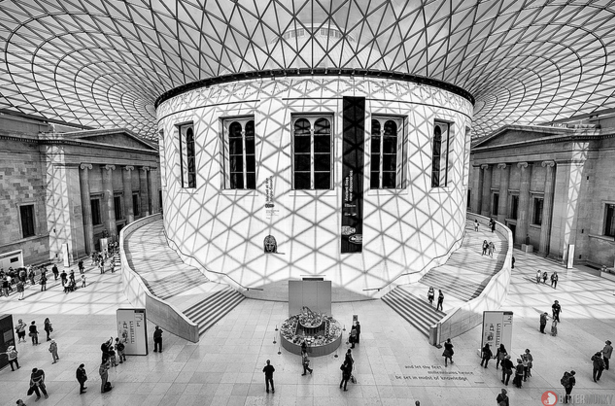 Architecture inside the British Museum – #1 of 1,318 things to do in London on Tripadvisor [Flikr; Bitter Munky ]

“TripAdvisor was a real lesson for us,” said Robert Fernando, who owes a family-run hotel in Victoria, London called Melita House Hotel.

He says that it has helped to keep him “motivated” that the hotel standards are always “top-notch” and it helps him set goals for what he may need to improve.

Conversely, others don’t feel so positively about TripAdvisor’s growth.

In September numerous restaurants and hotels threatened TripAdvisor by stating that they want to take legal action against the website, as they argued “the good reviews are helpful but the bad reviews can ruin a business, and under what basis? We don’t even know if most of the reviews are reliable sources”.

Isa Ramandani’s case is an important example to look at when seeing the impact of TripAdvisor reviews on businesses. Ramadani owns a small restaurant near Thornton Heath called Bruschetta’s and he says that although it is not perfect yet, it is good value for money.

However that business was absolutely wrecked when he received a review on TripAdvisor saying “Bruschetta’s, what can I say? The worst I have been to in years, and trust me I have experienced some pretty bad restaurants in my time. Dirty cutlery, uncooked chicken and rude staff, would not recommend.”

Travellers, tourists, people overall that are able to review are extremely aware of the power that they hold on businesses.

Many have tried to use a bad review as an intimidation to businesses in order to get a discount or even a refund, or they are able to bribe businesses with two or three good reviews to get a room upgrade or discount on the rooms or food.

Many hotels, restaurants, cafes and small B&B owners protest that although they are able to show proof that a review is in fact false, it is still extremely hard for the review to be deleted or altered.

In addition to this outdated complaints or bad reviews are never removed on TripAdvisor, which some argue underlines how undependable the site is, as how can you trust complaints written years ago?

Ramadani said that “TripAdvisor claims ‘guilty until proven innocent’ and I have tried to write many management responses on TripAdvisor and the process is a difficult one as my replies are almost always censored.

People writing the reviews, know the way around so that they are not detected. For example they can add a section which they are very critical of the business to an unquestionably brilliant review.

They can also use different email addresses and devices to post these reviews so that other hotels do not see a track record.

Some hotel reviews are harsh, but some are just way too good to be true, mentioning minor details. Some hotel owners make fake accounts, where they are able to write good reviews on their business.

Travel bloggers say that TripAdvisor has a red disclaimer next to the names of hotels that they have realised have many fake reviews. Maya Jefferson, a blogger on travel and tourism says that “if TripAdvisor doesn’t restore its credibility, it is eventually going to crumble, as people won’t want to read untrue sources.”

TripAdvisor are able to rank the highest to the lowest depending on the businesses reviews, so if a hotel has an endless amount of good reviews TripAdvisor will rank them highly. Loyal users of TripAdvisor say that this a convenient way to find the best accommodation.

Last month many pointed out the red warnings on TripAdvisor which said: “TripAdvisor has reasonable cause to believe that either this property or individuals associated with the property may have attempted to manipulate our popularity index by interfering with the unbiased nature of our reviews. Please take this into consideration when researching your travel plans.” Clearly raising concerns that some of the reviews may be fake.

In October 2015 a Twitter campaign emerged with the #noreceiptnoreview they received support from many restaurants and hotels as this campaign aimed to persuade websites like TripAdvisor to only allow reviews if they have solid evidence that what happened is true, and a scanned receipt to show that that they did in fact visit where they are claiming they did.

Amazon say that their brand reputation was nearly ruined when they were getting fake reviews from people being paid to write negative reviews.

Also many articles have been written in which people made a fake restaurant or hotel to test the reliability of TripAdvisor and on some occasions they ended up being very popular.

The credibility of websites such as TripAdvisor will be under threat and questioned if people are unable to trust whether reviews.