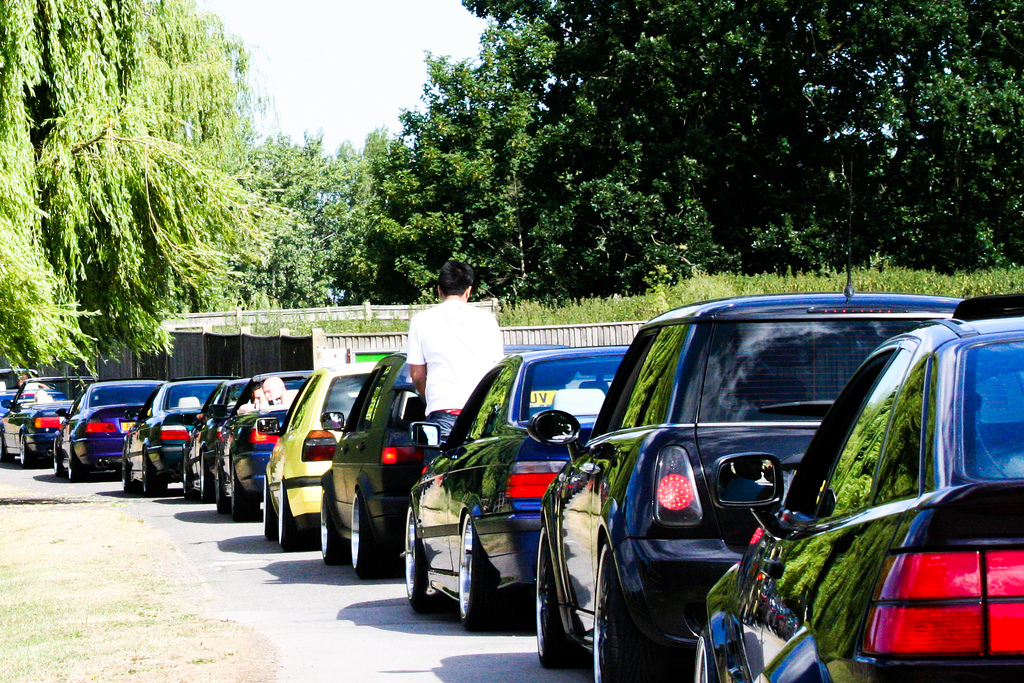 We are a country of addicts. On the more benign end of the scale lies the love of arguably the most important invention of the twentieth century, the car.

Britain is a nation of avowed petrol heads, with programmes such as Top Gear attaining worldwide popularity and car shows such as Goodwood attracting spectators from around the world. 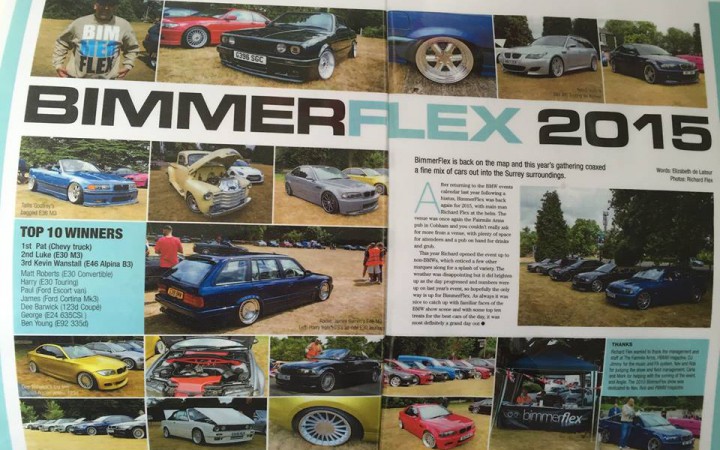 A review of Bimmerflex 2015 in Performance BMW magazine [Sam Skinner].

Just an hour’s drive north of Goodwood, there is another show that attracts car fanatics from across the seas, organised and run by just one man.

Richard Flex started Bimmerflex as a reaction to the laddish culture perceived by many as characteristic of the motoring community in this country.

His shows are, uniquely, community orientated, with many families attending. Richard experienced exponential growth during the early years of his car show, going from 150 to 250 cars within two years, before eventually doubling that to 500.

After taking a break for a few years to re-evaluate, Bimmerflex 2015 eased Richard back into the game, with his thirteenth show year aiming to be the most successful yet.

Artefact met him at his house in Surrey, easily recognizable with a buffed to perfection black BMW X5 sitting proudly in the driveway, complete with Bimmerflex plates. 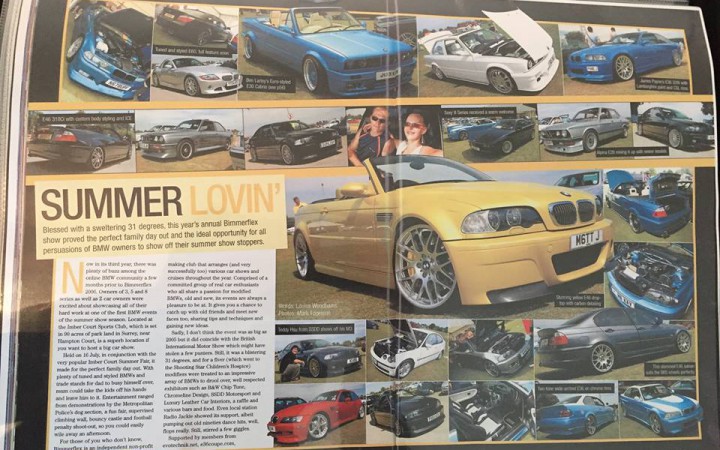 A review of Bimmerflex 2006 in Performance BMW magazine [Sam Skinner].

Richard’s house is a shrine to BMW, with memorabilia stacked everywhere, and he is only too happy to share folders of photos and clippings charting the growth of his baby.

We look out at the tank sized car in his driveway and he launches into one of his frequent reminiscences.

“I was just five years old when my mum got me a second hand kids toy, an American Army Jeep to pedal around in. She painted it Army green with a big white star on the sides,” he thinks back, grinning.

“On Christmas Day at just five years old, they couldn’t keep me out of it.”

Richard grew up in London in the 70s, at the zenith of the muscle car era. He recalls how he first fell in love on Chelsea’s Kings Road, where every last Saturday of the month thousands of people would line the street watching the hot rods shoot by, a veritable “what’s what” of motor vehicles at the time, with beach buggies, bikes and Bedford vans all in attendance.

After a stint at school on a 50cc Honda moped, Richard’s love affair started in earnest with a Ford Anglia, bought for £10, followed by a Ford Cortina Mk1 for £50, the first car he ever modified. 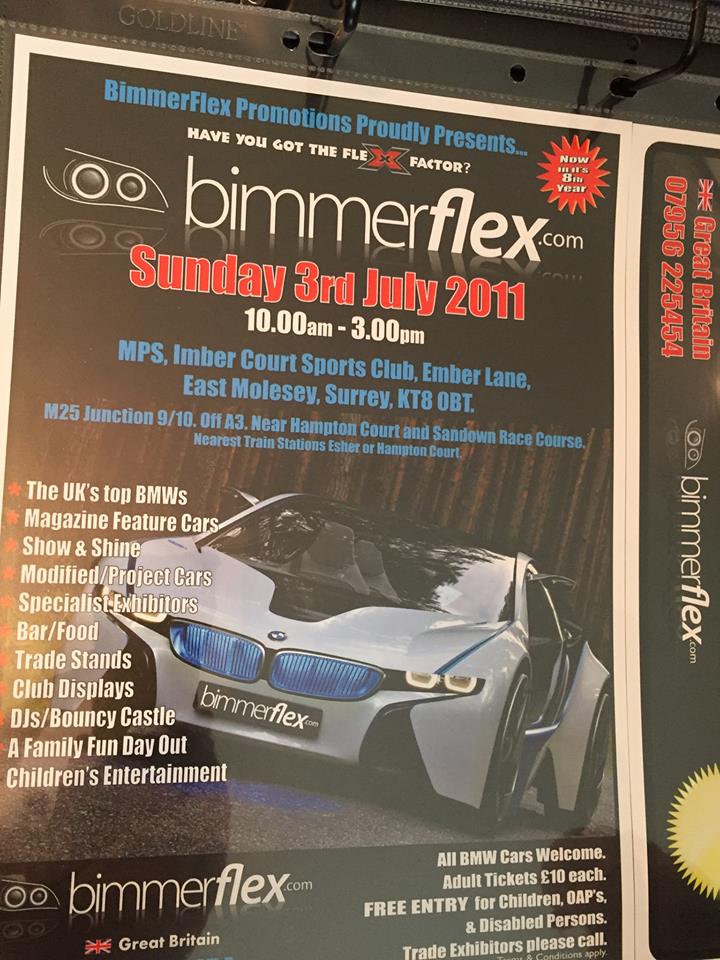 An example of a Bimmerflex poster.

As Richard brings over the second cup of tea, we move onto Bimmerflex, and the story behind his vision: “I set up Bimmerflex in 2004. Having been a spectator at most of the car shows across the country I decided on a car show for BMW’s. I’ve bought 13 in the last 11 years, with two of them having been featured in Performance BMW magazine.”

One thing Richard noticed at these shows was the lack of inclusivity. The shows appealed primarily to the Top Gear demographic of wide boys and dad-rockers, with no concerted attempt to bring women and children in.

Thus, the concept of a car show family day out was born, with such things as bouncy castles for children and beauty treatment stalls for women, amongst other more traditional car show elements.

Richard freely admits he put a lot on the line for the show: “I started the show on my own with no support. My mum had been diagnosed with cancer so I decided to also use the show to promote awareness and support Cancer Research UK. 150 BMW’s turned up, and I raised £1500 for Cancer Research UK. Sadly, I lost my mum before the show.”

Richard continued and the show slowly became one of the biggest independent car shows in the country.

“The sheer effort of taking a year to plan each show alone can be overwhelming, not to mention the the ever present unpredictability of both attendance numbers, and of course, our famous British weather!”

However, Richard soon began to attract support from BMW dealerships, as well as the RAC, AA and tuning and styling companies. He is keen to stress the importance of this in helping expansion, as well as involving the local businesses and community as an integral part of the success of his shows.

“At my biggest show I had 500 cars attend, with over 700 people travelling from all over. Among the families, we’ve had people come from Ireland and the Netherlands, these people are true die-hard car enthusiasts.”

We asked him why he thought people came from so far away: ‘It’s a passion, it’s a lifestyle, it’s an addiction that’s hard to break from! Buying a car, jazzing it up to their liking, showing off, being unique, and enjoying driving it. It’s an experience. Some people buy dolls houses, design them, dress them up, and showcase them. Same with Crufts, the dog show. Cars are no different, just slightly more expensive! If people have a passion and a desire, their beliefs will always win out.”

Bimmerflex have supported four UK charities. Bimmerflex 2016 is on Sunday, July 10 at the Fairmile Arms in Cobham, Surrey.