A Miss Universe experience to remember

A small village of Wroxham, Norfolk seems far away from the life pleasures of London and representing Great Britain at Miss Universe in Las Vegas.

Narissara Nena France, born in Norfolk, ventured off to Vegas in December, to share the stage with 79 equally stunning women from all over the world as the representative of Great Britain.

The process is not an easy one and even though Miss Universe and beauty pageants are not the talk of the town in our part of the world, other European and Asian countries value them highly.

However, this year, the Miss Univerise pageant gained a huge amount of press after the host, Steve Harvey, crowned the wrong winner – accidentally announcing that Miss Columbia had won the crown before he had to correct himself and then announce that it was Miss Philippines who had actually won.

As events unfolded, the topic was discussed throughout media outlets and the crowning moment has gained millions views on YouTube and as Miss Great Britain, Nena (people refer to her by her middle name) was there to witness it all.

How does one decide that a career in modelling is suitable for them? Most models start young and it was not any different for Nena: “When I was 13, my hairdresser asked me if I wanted to model for them in exchange for free haircuts and I had no hesitation in saying yes!.

At the young age of 13, the thought of being pampered was not something you turn your nose up at. “I thought it was really cool, free haircuts, having my picture around the salon in my hometown! I could not complain”.

Her modelling career was one she was eager to pursue and when she turned 16, she was scouted by Select Models, who were based in London. 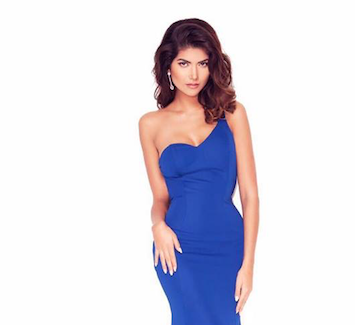 Modelling opportunities are endless but the industry is a tough one, you have to sacrifice a lot and after all, it is an industry where looks get you far but for Nena, she knew the opportunities were only endless in London.

“When I was 18, I kind of moved to London, but unintentionally! I know that sounds weird but I was spending a lot of time with two of my friends there and one day I just thought to myself: I am now a Londoner!”

People are guilty of making first hand judgements and especially with models. You may think they have it all and they live the perfect life, they’re beautiful, young, get preferential treatment but there are aspects that Nena thinks it’s important to speak about, the toughness of the industry and that size most definitely does matter: “My modelling career was starting to halt, you could say it was on and off”.

Of course, her passion has always been modelling which makes it even harder to accept the harsh realities: “There have been instances where I’ve had to leave agencies because they have told me to lose weight and I just rebelled against it. You could say that it’s not a good quality to have but I moved on with other agencies and didn’t have problems”

What does the glamorous life of modelling shoots involve? Or are they glamorous? Although many pageant contestants are models, the pageant world, in contrast to modelling, is a fast paced world and many shoots can be draining.

“I enjoy doing pageant shows rather than shoots, which is weird because shows are a lot more demanding as you have rehearsals, quick changes and longer days but modelling is the complete opposite. You spend your days waiting, especially at castings where you may see a client for 1-2 minutes and you have waited for hours. Shows keep you busy, the days are manic and time flies by”.

We begin to talk about the Miss Universe experience. As you could probably imagine, there are hundreds of girls worldwide who would gladly step onto the stage and represent a nation, but the road is a long one and can take years.

“I first got into pageants when I was 20 and did a few shows but it’s not easy, actually, I would say it is quite difficult. You do a lot of…experience, should I say? Well yeah, it is experience as I was never competitive about it so I just wanted to learn how to walk on the runway, what it involves and also learn from others”.

You would think there is drama galore at these pageants, every girl wants to win, be crowned the most beautiful but Nena says it is the complete opposite: “I have honestly met the most amazing people through pageants, people think just because there are loads of pretty girls there will be drama but I have rarely, if ever, encountered it, everyone I have met has been a treat!” 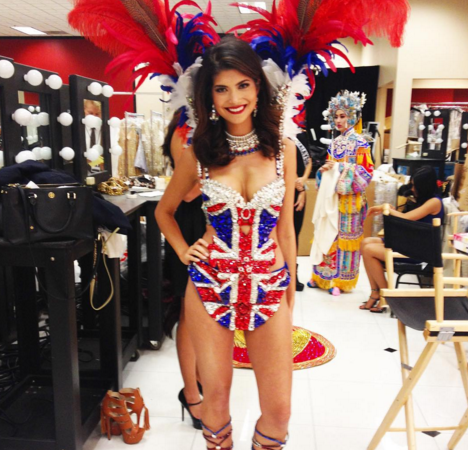 Nena went through numerous different pageants before heading off to Las Vegas for Miss Universe 2015.

She first won Miss London, which meant she competed in Miss England, where she came runner up.

Months later, she entered Miss Great Britain and won: “I knew that if I was lucky enough to win, I would represent GB at Miss Universe, which is the biggest pageant of all, I think it’s definitely something I can be proud of even though pageants aren’t highly thought of in the UK, being half Thai and knowing it is considered an achievement there meant I was over the moon!”

December 2015, the Miss Universe experience begins. 80 girls, who have all been crowned “Miss” of their own countries, gather together to compete for the big prize.

Three weeks away, meeting new people or your “competitors” could have gone worse: “You get put into families, as we would like to call them and you share rooms with someone who speaks the same language as you. The girls were from all over the world so the language barrier would obviously be a problem. It’s hard to get to know 80 girls, especially because of language barriers and naturally you swung towards those you were grouped with”. 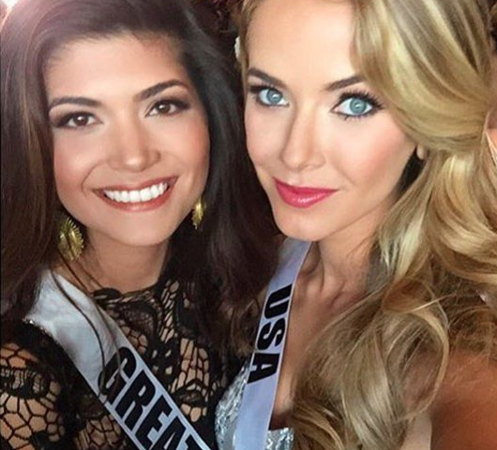 When asked about the worst experiences and how it could have been better, Nena replied: “The cold! In Vegas, and other hot countries, the aircon is on constantly or maybe the coffee, it wasn’t strong enough!”.

Naturally, you have to ask about the crowning moment, which made the headlines and was heavily featured in all newspapers: “It was just crazy, we were all standing on stage and they crowned Miss Columbia. I was so happy for her, I loved her! The host always has a screen near the front of the stage that only those on stage can see and it read ‘Miss Philippines, take your winning walk’.”

What does one do in this moment? Who do you congratulate? “We were all just looking at each other and couldn’t congratulate anyone. After it became clear, the majority just ran to Miss Columbia and gave her a hug. It was unfair on both girls but it was just an honest mistake.”

There’s a lot to learn when grouped with 80 different nationalities, after all, it’s a unique experience that does not happen to many.

You make friends, you learn about different cultures and most importantly, you have a place to stay in 80 different countries!

So Nena says: ”We still keep in touch, we have a Whatsapp group and it is very active. We plan trips all over the world. That’s why it’s so unique, you feel like you get a cultural experience and meet girls and I can go to any country and have someone there! Miss Peru has just gotten engaged and said we are all invited! A trip to Peru, I’ll take that!”

Of all the personal good to come from the trip, as an organisation, Miss Universe teamed up with Stop Hunger Now, a charity that does endless work to stop hunger worldwide, they hold events where volunteers package bags that are sent away.

All contestants got involved as a way of giving to those who need it most. Kind gestures reach a million miles and the girls were all delighted to help.

Exploitation on the runway

Why are we ignoring police brutality in the UK?

The natural wonder of the Grand Canyon