Coping with grief: Paris the day after the attacks

On the morning of Saturday, November 14, Parisians woke up to the aftermath of the terror attacks that killed 130 people and left hundreds others injured.

Most of the attacks on Paris occurred only minutes apart as the locations were close to each other, in the 10th and 11th arrondissement.

Photography student Shahram Saadat went out to visit those places early that morning to document the first reactions from the people of Paris. 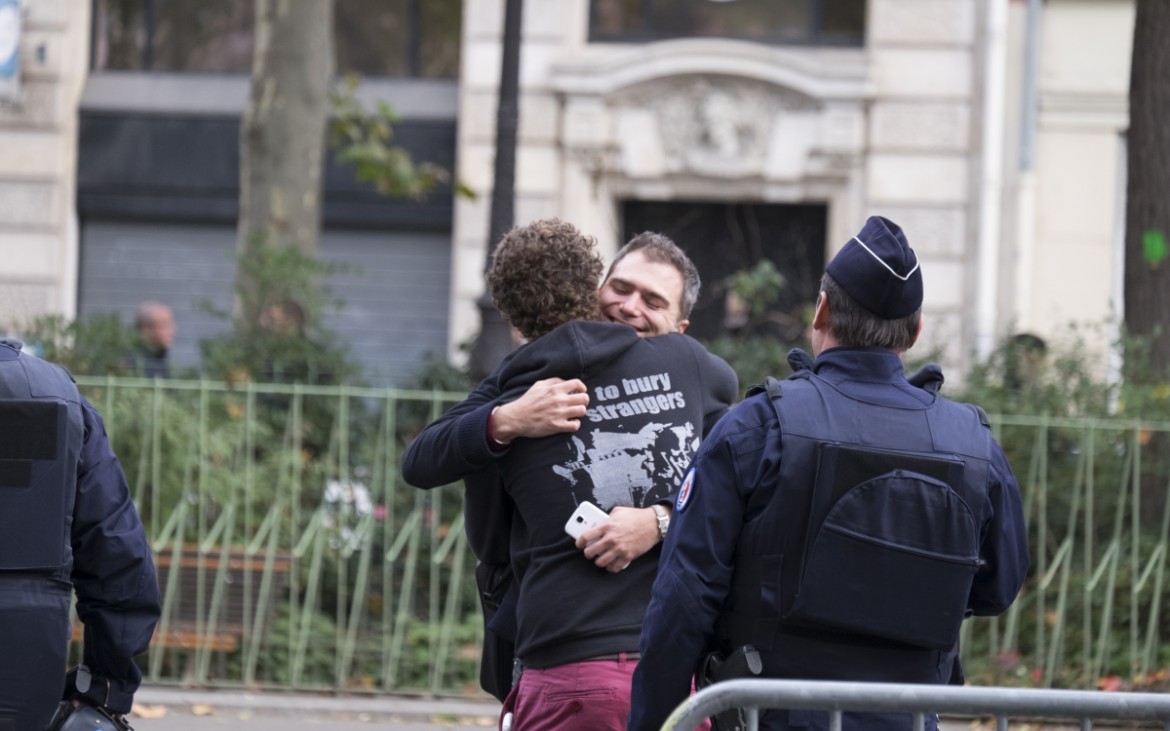 It’s eight in the morning in front of Le Bataclan. The French police blocked the entrance and red taped Rue Voltaire, which makes it impossible for the public or for journalists to get closer to the front door where the massacre started the night before.

The Bataclan is one of the biggest concert halls in Paris – it has two floors including one big dance hall with a capacity of 1,500.

Founded in 1865, the salle du Bataclan, where the attack started, has hosted the biggest names in the music and comedy industry: The Kills, Robbie Williams, Snoop Dogg, NTM, Prince and Dany Boon to name a few.

In the past the concert hall has been the subject of threats after hosting meetings of Jewish organisations.

The venue has many exits and floors, so this morning more and more people were still coming out of the venue, where they had been hiding in whatever space they could find: closets, cupboards, under tables and in bathrooms, behind doors, dressing rooms and cellars.

In the passage Saint-Pierre Amelot, two men embrace each other, one of them wearing a shirt with the logo of the New-York American rock band A Place to Bury Strangers.

The police are paternal but alert, telling people to move out quickly, in case of another attack.

These two guys are brothers, reunited after one of them was stuck inside the concert hall where 130 people died.

The one with the rock band shirt was held hostage for hours among the thousands of concert-goers.

They were dancing at the Eagles of Death Metal gig, an American rock band from California who survived the attacks by leaving the stage minutes after they heard the sound of what everyone thought were firecrackers exploding. 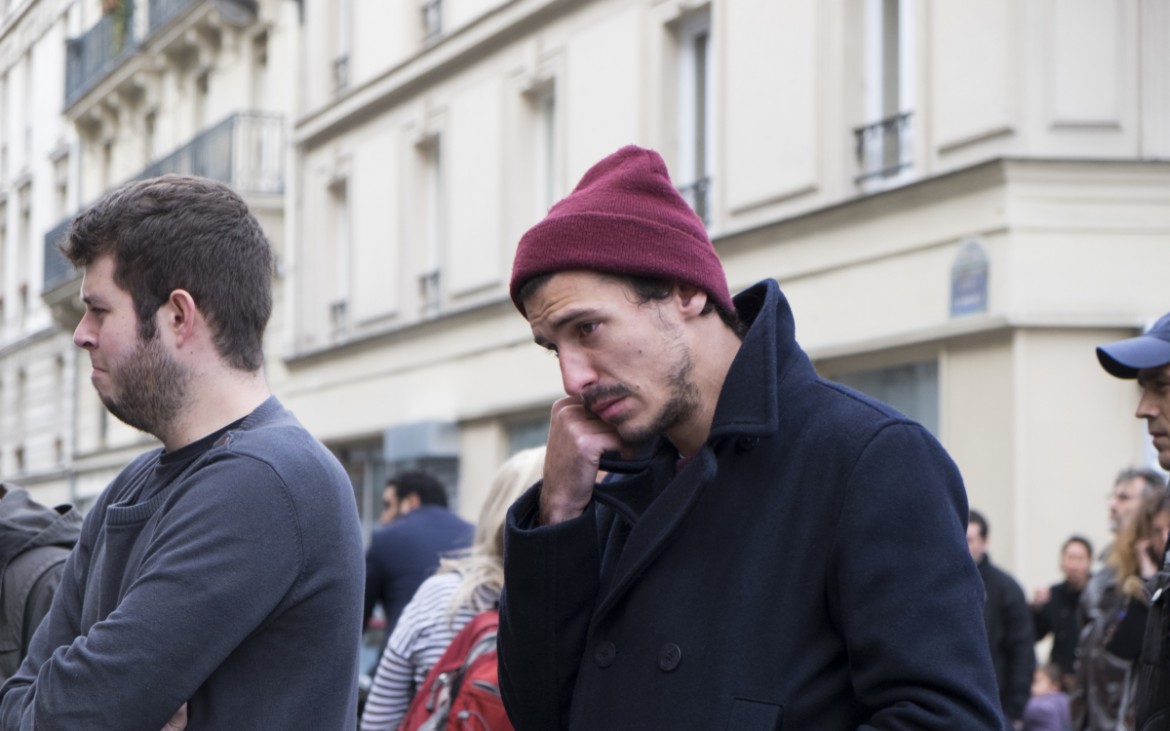 Near the bar le Carillon down to the left is Rue Alibert, where 14 people were shot dead by the terrorists at half-past nine that evening.

Parisians and local residents come to pay tribute in front of Le Petit Cambodge restaurant and the bar Le Carillon, which are opposite each other.

Hours go by and more flowers are laid out in front of those now tragic places.

Candles are lit and messages of comfort hastily written. A man has just got out of his hiding place in the Bataclan. He cries at the tribute paid to the victims.

Many passers-by stop for a moment to give a word of support.

The locals join in silence, some holding each other’s hands as a friendly gesture, to give some comfort.

Every time someone lays flowers in front of le Carillon, tons of photographers leap into action to show the world the grief Paris is undergoing.

Shahram felt the media presence was overwhelming in the aftermath.

“Some of them were pretty ruthless so they could get their photos and stories; yet the local residents would come out of their flats to urge the media for an interview or a comment,” he tells Artefact. 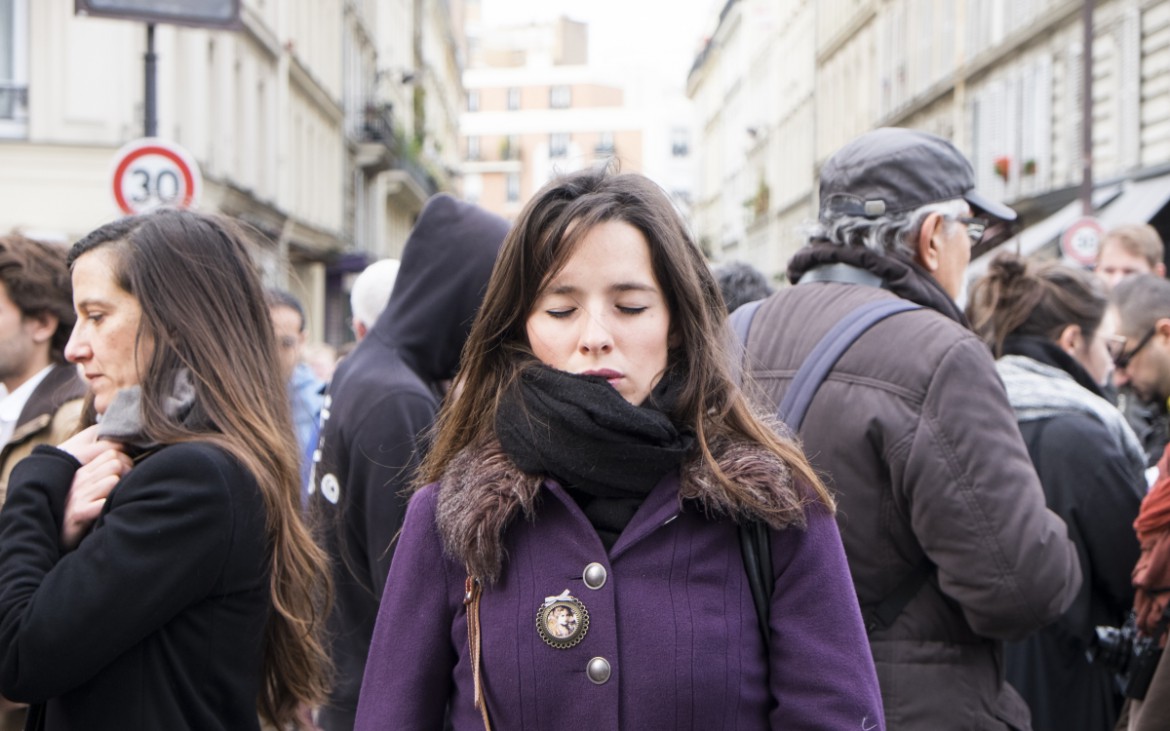 Many journalists gather to ask the local residents and members of the public about their feelings after what they witnessed.

Some residents were not in the area when the attacks occurred, yet they have a lot to tell.

The area is socially mixed, a relatively cheap place for young people to go out and have a drink on a Friday night, featuring bars, cafes, Turkish and Greek restaurants.

One woman stands directly in front of Le Petit Cambodge for more than twenty minutes, surrounded by photographers and citizens shooting with their smartphones, her lips slowly moving as she seems to be praying. Then she leaves without a word, her eyes half-closed.

The public is calm, no-one seems to know what to do, where to go next.

Most of them chain smoke cigarettes and look down towards the murals, where flowers, candles and messages have accumulated since the early sunset hours. 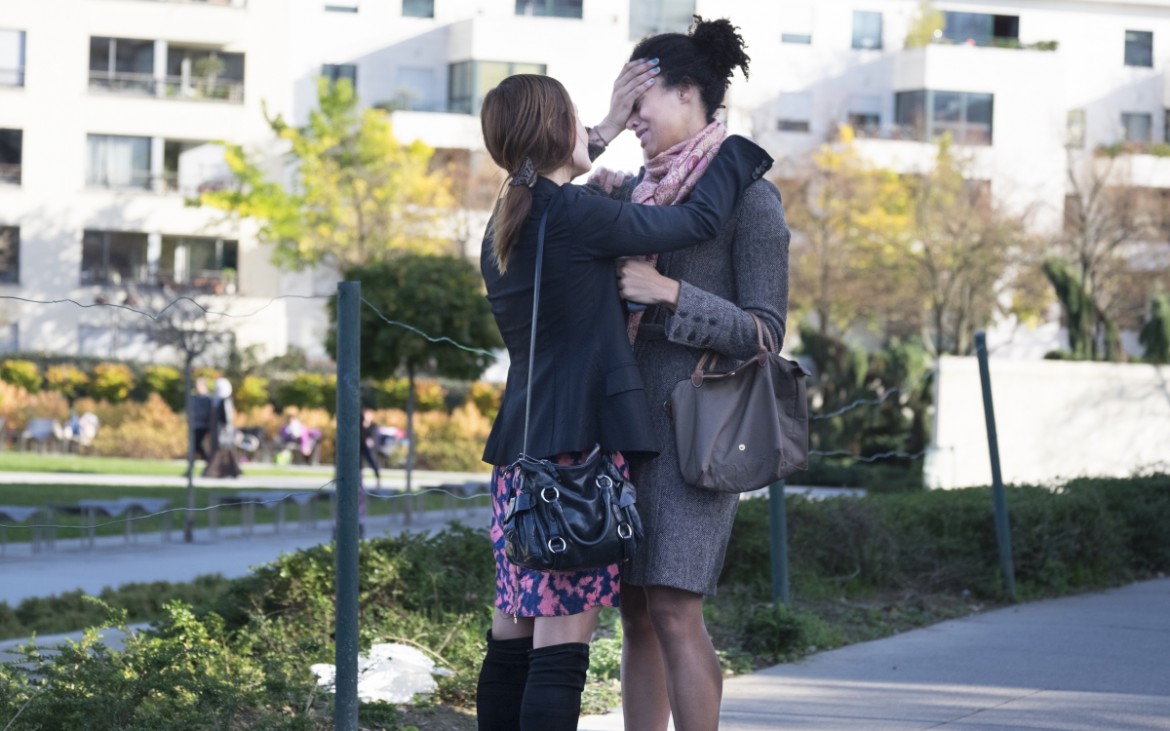 09:00 – Rue Le Blanc near the Seine
It’s Sunday at the Hospital Georges Pompidou and the A&E doctors are overwhelmed with the numbers of victims arriving as the day goes by.

In the morning before the attacks, the emergency medical services in France (SAMU) and the hospitals in Paris had by chance decided to organise a terrorism attack simulation to prevent the risk of mismanagement during any potential threat.

This simulation might have helped reduce the waiting time after the shootings.

In front of the building, a woman collapses after being told her friend died inside the Bataclan.

She gets support from her other friend, who tries to protect her from the journalists and photographers who want to catch the women’s reaction to the terrible news that came.

In this A&E located in the 15th arrondissement, the staff relentlessly work to identify the victims.

Most of the victims arrived at Georges-Pompidou at two in the morning on Saturday, often without their IDs, shoes, or clothes, lost in the confusion.

Many Parisians decided to go to the hospital to give blood as rumours spread by tweets on social media, urging the public to help victims with blood donations.

The number of citizens who offered help was overwhelming.

Online misinformation led doctors to tweet back asking the public not to come anymore, when long queues in front of the A&Es and numerous calls to register slowed the medical staff from helping victims who were in need of surgery.

Parisians almost sleepwalked their weekend so wrecked was the city they had to wake up to, with bullet holes and broken glass covering their much-loved cafes; yet the solidarity everyone felt and shared was part of the journey lived in France and in the rest of the world.