Has Trump taken it too far? 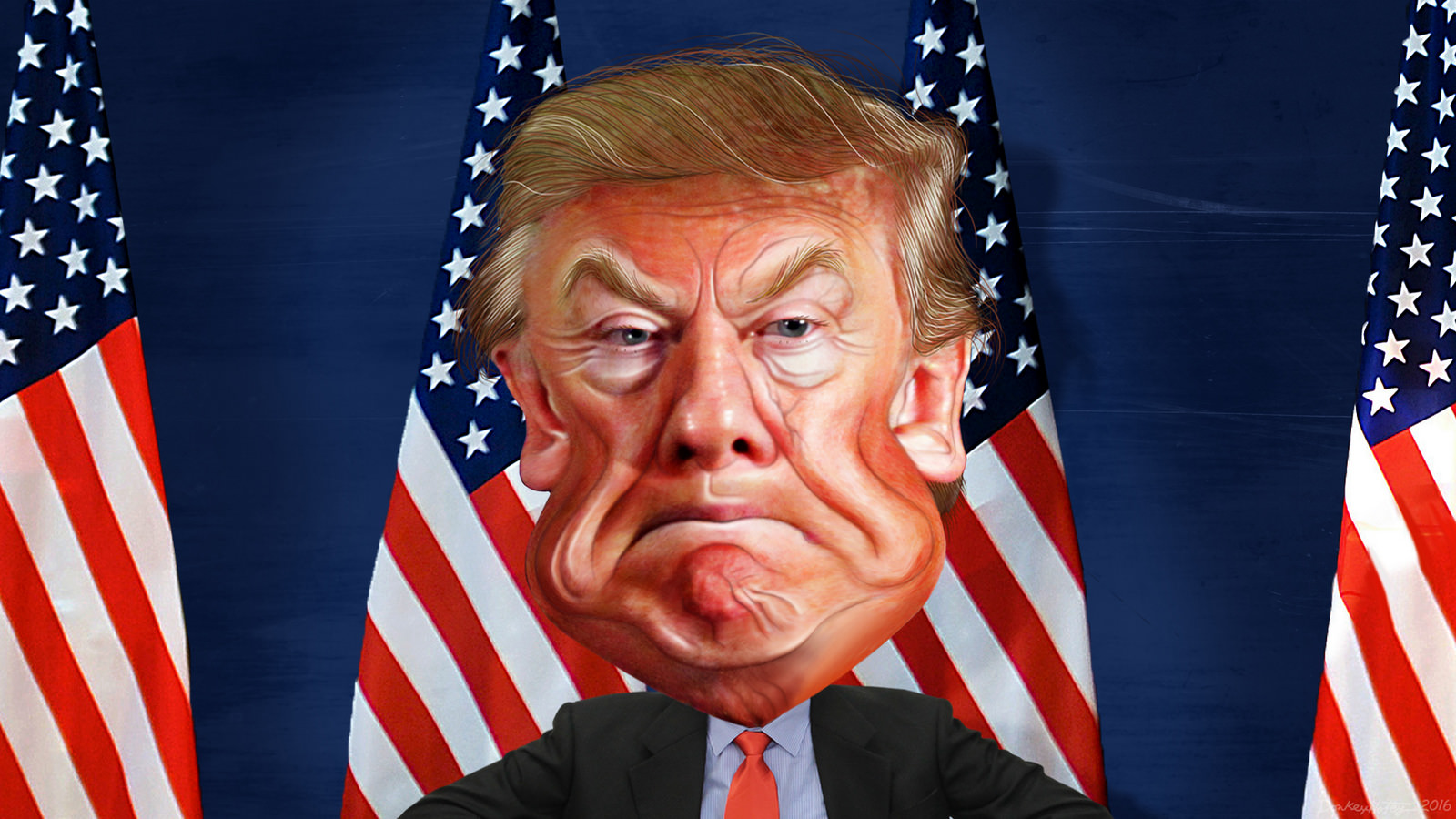 Having radical views may get tongues wagging in future history classes, but being placed side-by-side with Hitler in today’s media may not be a good thing, or is it?

To the surprise of many people, Donald Trump has managed to rack up a following as a candidate for this year’s American presidency elections.

Donald Trump may have quite a large following but there are many people who oppose his views. Trump also manages to contradict himself in several interviews.

In fact, he has done it a few too many times that Stephen Colbert managed to moderate an ‘All-Trump Debate’.

Below is a side by side list that shows the proposed ideologies by both Trump and Hitler. 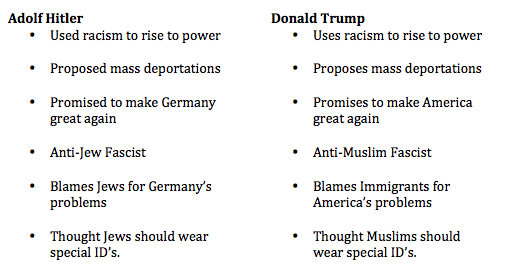 Many people have expressed strong views against Trump’s ideals.

Meg Spradlin, an American citizen currently residing in Washington, is one of them.

Meg identifies herself as a disabled American with Muslim family members.

She has concerns over the prospect of having Trump as America’s next president: “His fascist rhetoric and the salutes his followers give at rallies are very reminiscent of the Fascist Leaders of World War Two.

“He speaks of registering those of Muslim faith and banning them, or rounding them up. He mocks those with disabilities. He preys upon the weak-willed and feeble-minded and allies himself with the rich elite which spews out their propaganda via news networks owned by Rupert Murdoch.

“It is terrifying. I hope and pray the man isn’t elected because I do not want to see what he would unleash upon the world.” 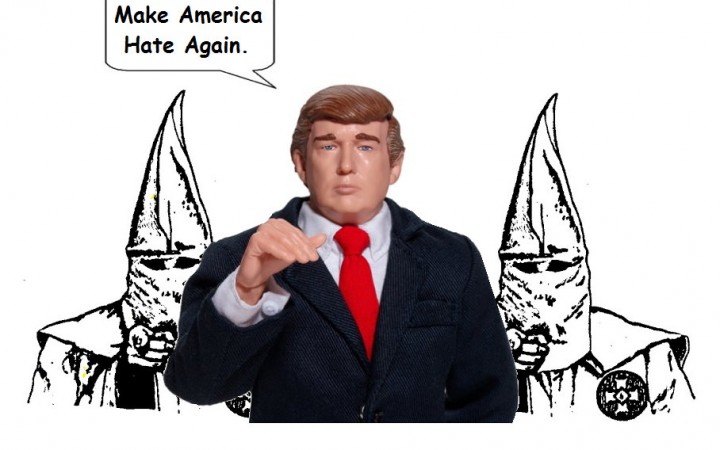 A 21-year-old student at the University of Virginia, Clara Gainey explained that she does not support Donald Trump in the forthcoming presidential elections.

“I think that he uses fear, hate, racism, sexism, and eye-catching gestures to gain popularity, which I am completely against.

“I think that if he were to become president, he would alienate the US in world affairs and create an environment of hate towards groups that he has targeted, such as muslims.”

Another American student, Sydney Stuberg, who has lived and studied in many cities outside the US discusses her opinions on Trump.

She also explains that she typically tries to avoid talking about politics in general but because of her growing concern about the upcoming election, she felt that she had to voice her opinions, which are backed up by many people.

She starts by reminiscing about the time when Trump first announced his candidacy in the upcoming elections. She did not think much of it then, but since his progress and the likelihood of him being the Republican candidate, her views have changed drastically.

It is no longer a joke, it has become a matter of fear and worry: “I am deeply concerned for the state of this nation seeing as a manipulative person such as Trump can get so far and gain this amount of support.

“If Trump is elected, forget about our reputation as a country being completely obliterated, but life as we know it will change.

“That may seem like an exaggeration to some, but we are talking about a man that shares many similar views with Hitler.”

She explains that the reasoning behind her rant is that she hopes to change the minds of some people that do support him and for them to think twice before ticking the box next to his name.

“This has gone too far and it is up to the sane people of the United States to avoid this maniac from sitting in the oval office.” 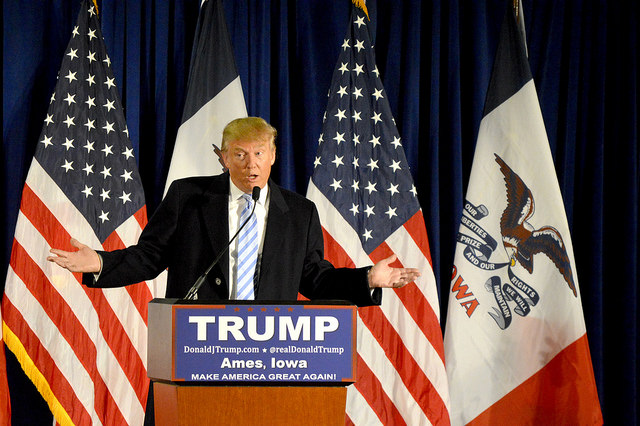 Trump’s candidacy does not only affect American citizens but also non-Americans. It is no news that Trump wants to build a ‘Mexican wall’ and is trying to force the Mexican government to build it.

A Mexican citizen Ana Paula shares her opinions about Trump being the personification of everything that is wrong with the people of the United States of America: all the racism, sexism and classism.

“As a Mexican and a human being interested in pursuing a human rights career I feel very strongly about Trump.

“I think it stopped being funny a while ago and I am happy to see people are starting to respond but a wave of violence and hatred that he was able to awake is scary in itself.”

Ana Paula believes that Trump is not the only problem but also the millions of supporters who share his point of view, which she believes speak badly of the American population.

“He has no real (or factual) proposals and is already harming the people, there has been an increase in bullying and discrimination in school as a direct result of his speech.”

A Korean student, Woosuk Lee, who currently studies in the US took a more statistical approach to Trump’s idea of building a Mexican wall; he thinks that the wall can create significant economic loss to the US.

“Trump is risking 14% out of all exports and around 6 million jobs which exist because of Mexico.”

Woosuk also continued to talk about his friend who supports Trump. “She believes that Trump will reunite the US and that he is the true voice of the US.”

He continued by explaining that when asked why, his friend had no clear reason. 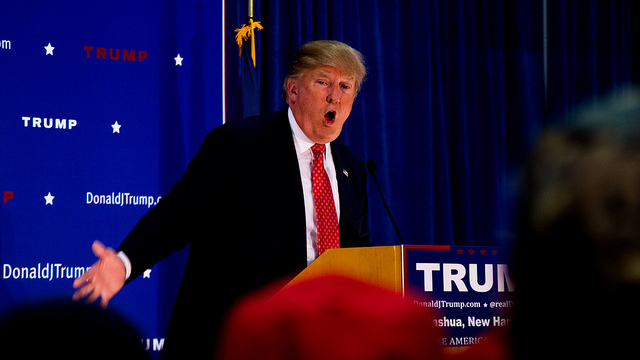 A law student from BPP University Law School, Mustapha Abu Bakar has a more religious point of view on the subject.

“Trump represents the darkest part of all that is America. America is faced with a situation where the leading candidate of one of its major political parties wants to ban followers of a religion from coming into the country.”

On account of Trump’s views on Muslims, Mustapha continues to explain that “Americans should use this historic moment as an opportunity to reflect on the ways their real life policies create danger for Muslims all over the world.”

According to Mustapha, the problem is not only with Trump but the citizens of United States of America.

The idea that Trump is even considered, as a candidate is bewildering to many people. He is a celebrity who according to Madoka Hara, from Japan, is ‘far from successful’: “Being a president is not the same as hosting a reality show, yet he seems to treat it as such, which is extremely disturbing.”

There are also people who refuse to talk about Trump as they believe that there is no chance he will become President of the United States (POTUS).

They are confident that the people of the United States will not vote for Trump as their next president.

However, the fact that many people are voicing their opinions against him and their worries about him being elected shows that the chance of his becoming the next president exists, and it’s worrying.

Even journalist Brandon Stanton, founder of Humans of New York, voiced his opinion against Trump in an open letter he posted on the HONY Facebook page.

“I am a journalist, Mr. Trump. And over the last two years I have conducted extensive interviews with hundreds of Muslims, chosen at random, on the streets of Iran, Iraq, and Pakistan. I’ve also interviewed hundreds of Syrian and Iraqi refugees across seven different countries. And I can confirm— the hateful one is you.”

In the beginning of his letter he sayd: “I realise now that there is no correct time to oppose violence and prejudice. The time is always now. Because along with millions of Americans, I’ve come to realise that opposing you is no longer a political decision. It is a moral one.”