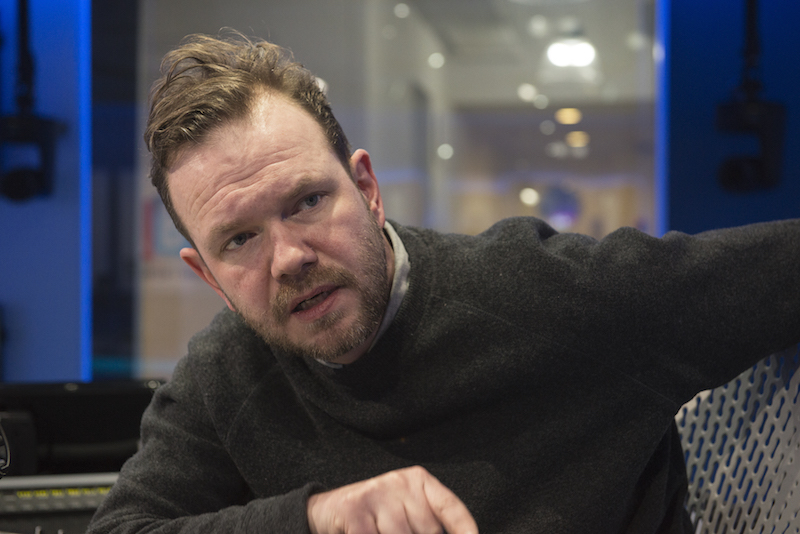 From selling suits on Regent Street to landing his dream job as a radio host, the LBC presenter talks us through his career.

O’Brien’s reputation precedes him. He is known as an opinionated rhetorical ninja who has the courage of his convictions and isn’t afraid to express them.

His record of schooling self aggrandising politicians like Nigel Farage, giving a master class to ignorant callers, and his firebrand rhetoric on his daily phone-in radio show, has earned him comparisons to the likes of pugilistic Paxman.

After listening to O’Brien’s show on a daily basis, one cannot be blamed for feeling apprehensive.

O’Brien’s studio is spacious and curved with bright blue lights, and LBC logos slapped on all around the walls.

The control room is separated from the studio by a glass window and it resembles the flight deck on the Starship Enterprise.

All the recordings are monitored here by O’Brien’s ‘crew members’, including his producer and two other personnel, who also act as his personal cheerleaders.

It’s 12 noon, and we are more than halfway through O’Brien’s daily show, which has changed pace from a harrowing discussion of the way anger is consuming people’s lives, with a caller revealing how rage regularly leads him to attack family and friends to a jovial element on getting rid of street performers in Central London.

O’Brien’s tone shifts effortlessly between both topics to match the emotions of his listeners – a quality that can be attributed to his 12 years of experience in the industry.

The discussion steers towards his dislike of living statues: “I don’t want to sound snobbish but I don’t want to be insincere, I absolutely hate living statues.” This is followed by an invitation to throw tomatoes at him while he was locked in stocks if they disapprove of his snobbery.

O’Brien is hyper-articulate without a doubt but there’s also a comical element to his personality. He stares at his producer through the window and sends her a signal by moving his right hand from side to side underneath his chin, usually a gesture for ‘cut’ or stop’ to which Tom, another member of staff jokes: “When he does that, he’s also calling me a wanker.”

In an industry dominated by right-wing shock jocks, O’Brien has a reputation for having surprisingly liberal, even left-wing, views.

However, his career has not been without the occasional controversy. In 2009 he made the news after the footballer Frank Lampard phoned his show to complain about O’Brien’s comments about Lampard and his former fiancé.

“I’d much rather be a scalpel than a sledgehammer.”

Watching O’Brien in person is a very different experience from listening to him on the radio. Despite the serious nature of conversation with his listeners, he creates a light-hearted ambience in the studio through his quirky mannerisms and funny facial expressions every time he disapproves of something a caller has said.

O’Brien later claims that very little time goes into preparing for the show, which on the LBC website boasts ‘no rules, no running order, no scripts’.

“I have a personal obsession for the news; I’m an anorak and therefore it’s no surprise that I’ll have the knowledge stored after having read newspapers on a daily basis for years,” he tells us.

Though he is known for being combative – as anyone who heard his battle with Nigel Farage will testify – in person he is courteous and considerate. As a caller goes off air, he speaks on the intercom that connects his studio to the control room and leans forward to ask how my name is pronounced, “is it Mayer or Maya? Is everything all right?”

As O’Brien releases his furrowed brows (his signature look), it’s an indication the show has come to an end and for a few moments there’s a subtle silence in the room – possibly a rarity given O’Brien’s famed loquacity.

He enters the control room in a cheerful manner to say hello and shake hands. His dishevelled brown hair and look of exhaustion immediately break the illusion of his energetic and chipper presentation behind the glass window.

O’Brien leads the way back to his studio. His takedown of Nigel Farage took place in this very room – the infamous event that went viral and ultimately brought him to a wider audience.

O’Brien, who is 44, began his career in newspapers and became the showbiz editor of the Daily Express – the paper that rejected him twice for their graduate traineeship.

After being turned down by all the nationals, he managed to get his first break while selling suits in a store on Regent Street.

He justifies this by saying: “There’s no shame in keeping the home fires burning and keeping the wolf from the door while you are trying to get the career that you dream of.”

And it turned out to be the manager of the clothes store who gave him that first break by mentioning that John Major, then Prime Minister, had bought a white suit at the shop.

Major was at the time widely derided for wearing grey and the Express bought the story for its gossip column. But even then it was eighteen months before O’Brien was able to give up the day job and describe himself as a full-time journalist.

O’Brien believes that self-confidence is the key to success in journalism, especially at the start of a career. “You need some talent, you need some luck and you need chutzpah and I honestly think in the early years chutzpah is probably more important than talent. I think having that ability to not be troubled by rejection to bang on a hundred doors will probably get you further than the most gifted writer or the most gifted speaker in your year.”

He tells a story of how his chutzpah got him an early gossip column scoop when he approached Sean Connery at a press reception. Connery’s son Jason had just made a film of Macbeth.

“I said something like, ‘what’s wrong Mr Connery, are you a bit jealous that you never got the chance to play the part yourself?’ and he stopped dead in the corridor and he turns around and he storms me and hits me quite hard on the nose to make my eyes water with his fingers, he didn’t punch me he just kept hitting me on the nose with his fingers and he goes ‘I played the part before you were born. Do your fucking homework, sonny.’”

“I have a personal obsession for the news; I’m an anorak”

While discussing his earlier print career, O’Brien admits that he didn’t make a very good news journalist due to his fear of going up to people and interviewing them.

“There’s a difference between being behind a mic and then not having anything to hide behind except a notebook which isn’t exactly perfect. It’s really strange, I’m exactly the same person outside the studio as I am inside but I just don’t have anything to prove in the studio.”

O’Brien says that it never occurred to him to get into radio as a career. “All I wanted to be was a newspaper journalist like my dad.” O’Brien’s father was a journalist who worked his way up through local and regional papers and sent his son to be educated privately at Ampleforth College and then the LSE.

O’Brien once had ambitions to become a political correspondent in Fleet Street. “I loved it up until a point when I realised it wasn’t the same industry my dad was a part of.”

“By fluke, I then got a gig on TV which lasted about a year and was about to go back to newspapers, until my wife pushed me to find a job as a broadcaster since I love doing it. Right at the end I got my first shift at LBC.”

A smile breaks out and O’Brien nostalgically reminisces about his first shift at LBC and how for the first few hours he sat behind the mic, terrified, talking to himself, until his friend Luke disguised as Leo from Notting Hill phoned in and “broke the seal”.

“It’s worse when the calls aren’t coming in.” He reverts back to Leo, “I still don’t know why he adopted a northern Irish accent till this day.”

He knows people see him as a cocky show-off and his father used to call him “a gob on a stick.” But what has made him successful is his fiery approach to interviewing politicians and ruthless way with thoughtless callers.

“I try not to get angry any more. With the nasty ones I do ramp it up still but generally they’re racists or homophobes. I’d much rather be a scalpel than a sledgehammer.” 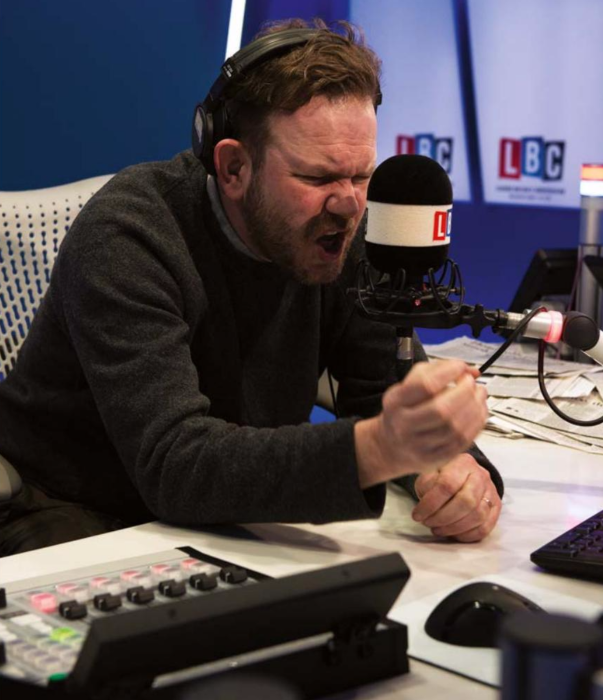 Perhaps the O’Brien we hear at 10am is merely just a passionate creature trying to educate people. Outside the studio James O’Brien is actually a more self-effacing man who likes to pick his two daughters up from school like any other doting father.

After his Farage interview started making rounds on the internet, O’Brien came to the attention of a wider audience and last year he began doing regular slots as a guest presenter on BBC2’s flagship programme Newsnight.

However is quick to insist that, if he was forced to choose between radio and TV his heart lies within radio. “I hope I never have to. People can’t call me Alan Partridge since I’ve done both but I can say trust me, radio is a million times better. There is room for both but I don’t see TV as a promotion.”

Last year his ITV show O’Brien – described as ‘disappointing’ by one critic – stopped airing after ten episodes. “I don’t think we will be able to do [the ITV show] any more because it was because it was based in Salford and if it comes down to it between [TV] and radio it is always going to be radio for me.

“Do you think your career in television is declining?” I ask him.

His frown lines begin to surface again and I feel I may have touched a nerve. “Are you offended?” His ego jumps out but a wounded O’Brien turns his frown into a grin as he starts to list the different television projects he’s got lined up. “There’s nothing I wish I could do that I’m not doing. I’m doing Watchdog now and working at the BBC until May.”

He also argues that if he worked full time for the BBC, he would be forced to be less outspoken. “If I were to take a job at the BBC on a permanent basis I would not be allowed to have an opinion again in public and at the moment I really like being opinionated.”

O’Brien may have been educated at a top public school but if you’re tuning into his show on a daily basis it becomes clear that he is at heart a left winger or at least a liberal middle class citizen, who gives ignorant callers short shrift, like Richard from Maidenhead, who demanded an apology from Muslims for the Charlie Hebdo attacks. He chuckles contentedly as he remembers the day he sent him away “with his ass up his sleeve.”

His eyes begin to droop and perhaps the exhaustion is setting in. His face doesn’t match his level of energy and it’s intriguing to wonder what drives his ability to be so forthcoming and chatty after entertaining his audience for three hours.

James O’Brien’s show airs from Monday to Friday at 10am on LBC.