Between the Devil and the deep blue sea

This past summer, I spent a couple of weeks at the Al-Jarahyrie Syrian Refugee camp — one of the worst in its region. The camp is home to a tiny tent school, smaller than a two bedroom apartment and hosts about 300 Syrian refugee students all year round.

I volunteered with Jusoor, an NGO of Syrian expatriates, as an English teacher for primary school level students, working with refugees who had fled the war zone about a year ago.

A week into the ESL program, I was still struggling to memorise my students’ names, so I decided to distribute name tags. The minute I took the name tags out of my backpack, the class gasped in excitement.

“No, they are only name tags that we will use to memorise one another’s names.”

After class, Kousai, a seven year-old, asked for another name tag for his sister. He pinned the tag on her sweater, telling her, “Don’t ever lose this, Mayassa — this is our only form of identification now. Remember what happened on the border when we told the guards we didn’t have IDs? You don’t want that to happen again, do you?”

Later in the week, I visited Kousai in his small tent by the school. His mom explained that they fled the country with nothing but their clothes on.

“We didn’t have time to pack anything — not even our ID cards,” she said. While visiting other families in their tent homes, I learned that most of the refugees in the camp had lost their identification documents.

When I asked if they were able to grab their passports before fleeing, a man shouted, “Passports? Why are you asking about that? We are not really worried about passports right now — we are worried about getting a rooftop to this tent before the winter.”

His son later explained in detail how his sister died last December because her tiny body couldn’t stand the cold. “She died before we were able to decide on a name for her, but I did decide on a name later. I chose Jasmine. I waited to see her for nine months, Miss, but didn’t really get the chance to watch her grow up. I know she is in a better place now, so don’t worry — I am fine.”

I then understood why his father shouted so loudly. 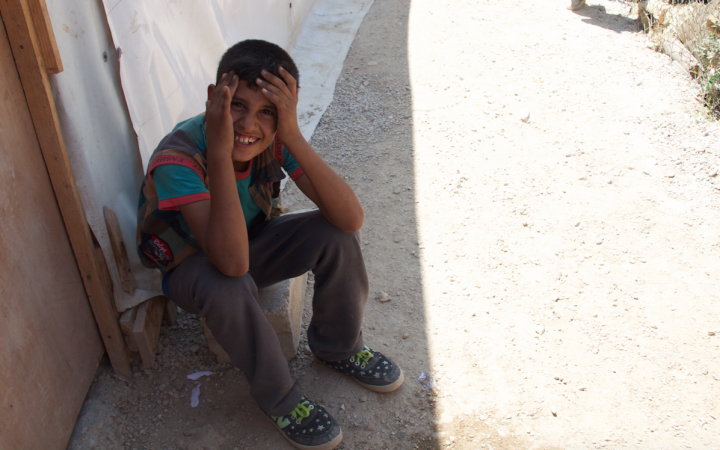 A boy sitting in the shade of a refugee tent.

Three weeks later, I sat in Lebanon’s International Airport, staring at my messenger bag and flipping through my many identification documents, hearing that lady’s voice in my head. “Not even our ID cards.”

This past summer was a summer of loss. I heard stories about people who had lost everything; their children, families, loved ones, homes, stores, factories and jobs.

I listened to people explain how they lost a body part during the bombing, how it felt and how they were coping with it. I watched as they acted out how they felt as barrel bombs exploded in their neighbourhoods.

I listened as my students imitated the sound of shells. “No, it is much louder than that, Miss. Listen, it is more like this,” said one student.

“No, it is even worse. Actually, no one here can imitate the sound for you. Just imagine the loudest sound you have ever heard, and multiply it by 1000,” shouted the second.

“A million times, Miss — a million times worse,” another corrected. Conversations like these were casual among my students.

If it was up to me, I’d choose drowning in the sea after fleeing on a boat. I think it is different and adventurous!

Another day, while we were colouring, a student said, “You know what, Miss? I don’t care how I’ll die anymore. Death has become so casual among us that I actually feel comfortable dying anyway.”

Another student continued, “Death is death. It doesn’t really matter whether you die because of a shell or a barrel bomb — what is the difference? If it was up to me, I’d choose drowning in the sea after fleeing on a boat. I think it is different and adventurous!”

During my lunch break, I sat in the principal’s room and heard teachers debate about where they should seek refuge. “How is your husband, Manal?” asked one teacher.

“He is stuck on the border of Athens. Those who promised his group a boat took their money and escaped, so he is not sure what to do next. But it’s okay — they are a group of about 100 men. They’ll manage. Sooner or later, they’ll reach Germany.”

I learned just this week that Manal had joined her husband in Athens. She travelled to him on a ‘death boat’ earlier last week. They haven’t reached Germany yet. 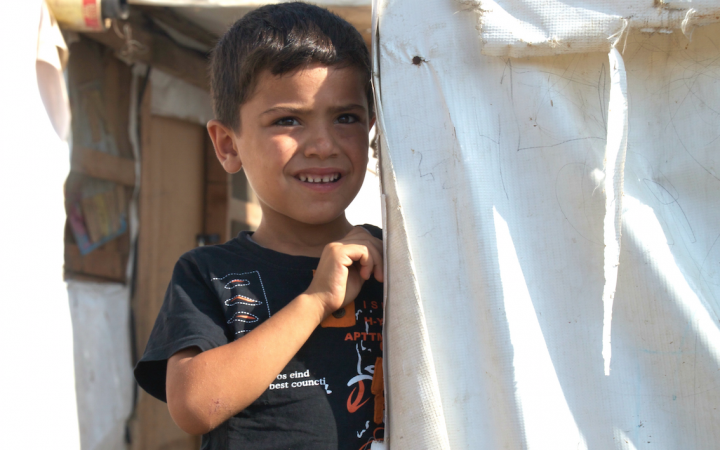 A Syrian boy peers out from behind a refugee tent.

When the school’s teachers asked me how I would travel back to the United States, I felt ashamed.

What could I say? “Oh, I’m boarding a two-storey plane, where I’ll sit on a comfortable seat with a screen of more than 100 movies, food and snacks, and in less than 24 hours I’ll get to the States. Why don’t you go ahead and continue telling me the story of how it took your husband three months to get to Norway by foot?”

The two-storey plane did get me back here to the States, and now I’m here in Berkeley, trying and failing to put aside all that I have heard, seen and experienced this past summer.

I wonder while flipping through the pictures of my students whether they have fled the camp or are still there, and whether they are still attending school or were forced to stop.

I hope their parents didn’t pull them out of school to have them work double shifts in the fields. I know that not much has changed in the camp since I left, and I’m sure that their situations are only getting worse.

Day and night, I have been following the news coverage of the refugees. While watching the news, I debate whether I would be happier knowing that my students are still safe in that refugee camp or if they’d be better off fleeing on one of those floating boats in the Mediterranean.

There’s a huge probability that they wouldn’t make it to Europe on such boats, but they probably won’t last long in a refugee camp in Lebanon, either. What a situation they are left in — between the devil and the deep blue sea, between a refugee camp and the Mediterranean.