“Senegalese migrants in Spain fight for Survival”, The Guardian stated in January 2013. The article talks about communication problems due to the language barrier, the immigrants’ struggles with the police and finding work to earn some money.

It’s a familiar tale of people facing problems when trying to start a new life. But we were searching for something more, a story that gives hope, a successful beginning to a new life here in Catalonia, and we found one.

We arrive at a Catalan fruit and vegetable farm called Del Pages A Casa in Vilassar de Mar, close to Barcelona. We had heard that there were several illegal workers there, most of them from Sub-Saharan Africa.

The owner of the farm, Maciu, comes to pick us up at the train station in his old, dirty SUV, greeting us as if he’d known us for ages. During the ride, he gives us the first insight to his migrant workers, telling us that they were the nicest, bravest most hard-working people he knows.

When we get there, under heavy rain, he starts by showing us his farm. Most of the products are tomatoes, conserved by insects and natural products than chemicals.

Directly after, he calls two of his workers, asking them if they have time to answer our questions. They gladly accept and we sit at a wooden table, protected from the rain by a plastic roof.

We don’t have much water, nor the right equipment for harvesting. It was impossible for us to make a living there, that’s why we left.

The two workers, Lamine and Moussa, are from Senegal and arrived in Spain in 2007. They are both warm and smiling. Lamine starts his tale first. Back in Senegal, he used to own a banana plantation, similar to the one he’s working on.

But soon he figured he didn’t have enough customers to cover the costs of his investment, and feeding his family became an everyday struggle. Being as the chances to stay alive in Senegal were too few to hope for a better living, he decided to move to Europe.

Most Senegalese immigrants come to Europe for economic reasons. As Lamine explains, in Senegal farming is difficult due to a lack of resources. “We don’t have much water, nor the right equipment for harvesting. It was impossible for us to make a living there, that’s why we left.”

Lamine and 41 other friends took a boat from a Senegalese coastal village to get to Morocco. During the journey they suffered from cold, hunger, thirst and fear. The waves thrashed their little boat that wasn’t made for such a crossing.

Lamine and others had no alternative but to constantly and desperately remove water from the boat with buckets, while the others fought to not only maintain the boat’s course but stay onboard by any means necessary.

Lamine tells us how he watched powerlessly as some of his best friends fell and drowned in the sea. He had to keep on, too many things depended on the journey, and it was too late to go back.

When they finally arrived in Morocco, in the middle of the desert, they spent 42 days crossing the Sahara, dying from the heat, until a patrol of coastguards arrested them and threw them in a jail for nine days, mistreating and barely feeding them.

From there, they were sent to Algeria, where they spent ten days on the road, walking towards the coast. At this moment, they only thought about surviving, their European goal almost forgotten.

“I was so exhausted that I couldn’t think about eating or drinking. Rest was the only thing I wanted at that moment,” Lamine tells us. 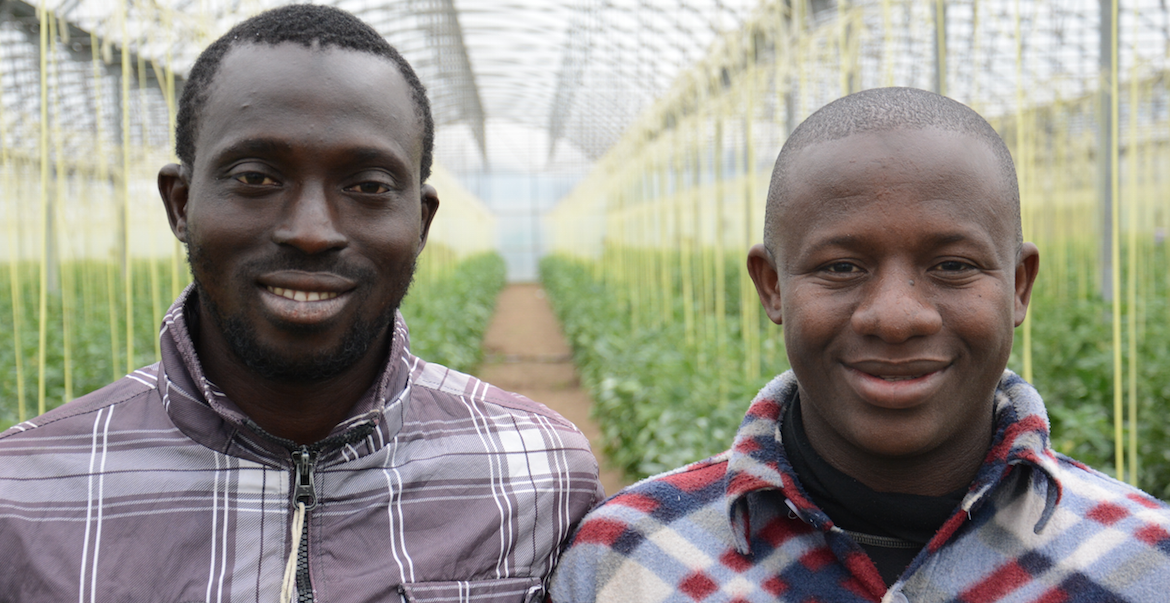 Lamine and Moussa who found work on a farm in Catalonia.

Finally, they made it back to Morocco, working in low-paid jobs in order to buy food and pay the sailor that would bring them to Spain. After three long and gruelling months, they reached the Canary Islands, where they were rescued by Spanish coastguards.

After Lamine finishes his tale, he’s still smiling but showing so much pain from his recount of the hell he had to endure.

Moussa begins his story. Without going into to many of the details, he told us that his story was similar to Lamine’s. However, the only difference was that he took a boat full of 130 people from Senegal and, after losing friends and fearing death every day, he finally managed to get to Tenerife, where they too were rescued by coastguards.

I was so exhausted that I couldn’t think about eating or drinking. Rest was the only thing I wanted at that moment.

Lamine and Moussa agreed that at first, when the Spanish coastguards were approaching them, they thought it was the end. But they were surprised that instead of being beaten or killed, they received blankets, coffee, warm water and food, before being taken to a police station to be able to sleep under a roof.

At this moment, they knew they had made the right choice to risk everything to get to Europe, and that, finally, the chance to have a real life showed up.

Moussa and Lamine are not the only ones in Senegal having the dream of a better life in Europe. According to the City Council, in Barcelona alone, 1,182 registered immigrants came from Senegal from January 2014 to January 2015. Since 2005 the number has nearly doubled.

There were roughly 3,000 immigrants in 2014, but Senegal is where most of them come from, followed by Nigeria and Guinea. Moreover, the total number of Senegalese immigrants in Barcelona is probably even higher, considering the ones living there unregistered.

After their arrival, Moussa and Lamine had their applications checked by a judge, who would determine if they could stay in Europe or if they’d have to be sent back. They were approved.

We are lucky to have such a boss, others didn’t have the same luck.

The next hurdle was the health-check. Both were taken to a hospital in order to verify if they had any kind of disease. The doctor couldn’t find any signs of illness, which meant they were safe – at least for now.

But in order not to be deported from Catalonia, immigrants need a residence permit. The document, issued by the Spanish consulate is completed while the applicants are in their country of origin and only for the reasons of living and working, family reunification and residency for other non-profit reasons.

If the applicant is already in Catalonia but doesn’t have a visa application yet, under special circumstances, they can also get a temporary residence permit in Spain for reasons of employment regulation, social regulation and Spanish parentage.

In order to get the residence permit and be able to stay legally, Moussa and Lamine needed to find a job. Luckily they encountered Maciu looking for some workers for his vegetable farm.

Without any qualifications nor good knowledge of the language, working on a farm seemed a good way to earn some money. Lourdes Montalà, who owns another farm close to Barcelona in Lleida, explains that many immigrants travel through Spain trying to find work on different farms.

According to the season, they help harvest different fruits and vegetables, like autumnal oranges in Valencia, or onions and pears and peaches at Lourdes’ farm in spring and summer.

Lourdes mainly employs immigrants and is really content with their work: “In fact, several people in Spain consider working in a farm as inferior work. If they can’t be managers or something else more powerful, they don’t want to work here.”

In contrast, many immigrant workers like being there and many want to stay permanently. There is a man from Romania who has worked at the farm for ten years, Lourdes tells us. Now, he is building a house near the farm for his family. 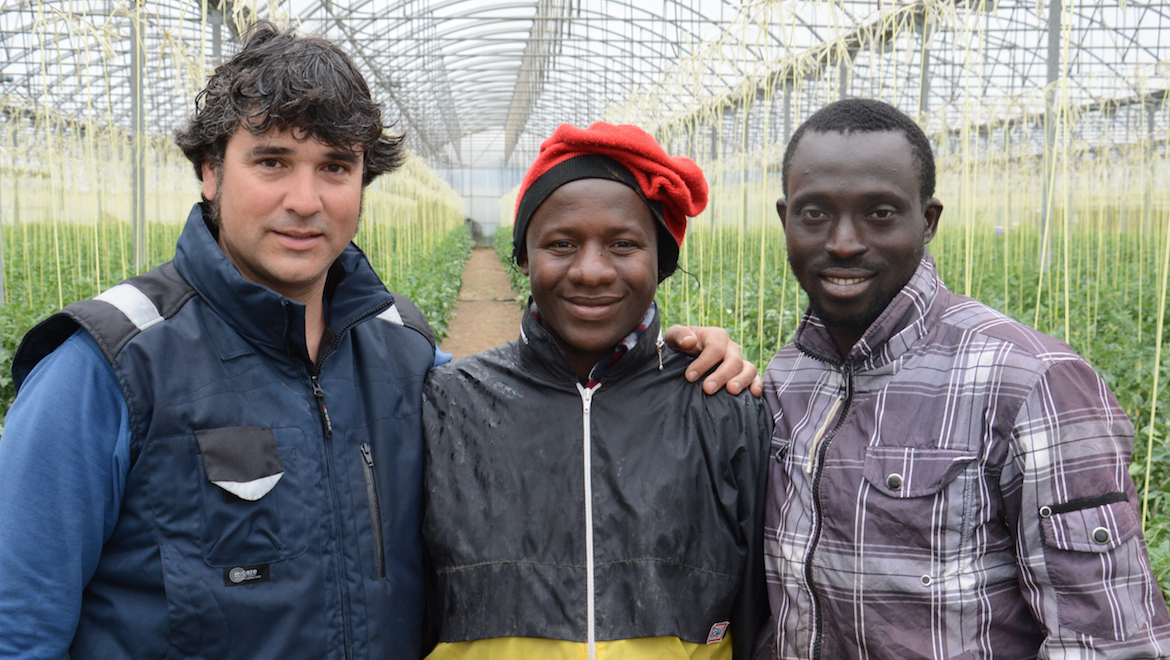 Maciu and his team at the farm in Catalonia.

Moussa and Lamine had to work at Maciu’s farm for three years before getting the permanent work permit and being able to work regularly and legally. The work permit also covers the healthcare.

Maciu helped them with the process of completing the paperwork. He was and still is very content with the work of the two Senegalese – and vice versa: “We are lucky to have such a boss, others didn’t have the same luck,” Moussa points out.

Maciu is not just a boss, but also a friend for them, helping with any problems they have concerning their families back home or their situation in Spain.

Moussa and Lamine found a place to live in a Senegalese community. They have to share a flat for three people with five, but they don’t mind – they have a roof above their head and live safely, that is all they wish for now.

Every resident in the flat has a contract in his own name; they are all registered legally. Lamine and Moussa have a very good relationship with their flatmates and the solidarity among them is strong, for example, if one of them has money problems, the others help out; the atmosphere between the different African communities is good.

“There are some issues, as anywhere in the world” they say. “Though nothing serious.” Of course they miss home, but still, they don’t complain. They have regular contact with their family and friends mostly through their smartphones, which is good, but not enough. Especially for Moussa, as he’s going to become a father in a few months and tries to visit his family back home from time to time.

Language is the most important barrier for migrants, a barrier that may isolate them from the social context where they are starting a new life.

Even with the difficulties of living abroad, both are quite happy with their lives in Spain and the decision they made. They say in Senegal the inequality is immense.

According to the data from the World Bank, between 2010 and 2015, the average income per habitant in Senegal was $2,333 per year, which means an average monthly income of less than $200.Considering the gap between the upper and lower class, this shows how little the actual income of the poorer part of society has.

Corruption is also a huge problem. In Catalonia, Moussa and Lamine feel like people are treated more equally, especially between genders. In Senegal the man is the leader and decision maker. They like the fact that the women here have a say.

And the language problems? When they arrived, they were able to attend some language courses offered by the government. Both learned Spanish, so communication for them isn’t a problem.

According to the Institute of Government and Public Policies and the Catalan Federation of Social Action Organisations, language is the most important barrier for migrants, a barrier that may isolate them from the social context where they are starting a new life.

In 2013 they interviewed several immigrants and found that the majority start learning Spanish, since it’s the language spoken in other countries and may facilitate other residences. Still, after staying a while in Catalonia, many also gain interest in learning Catalan. “We don’t speak Catalan, but we understand it,” Lamine explains.

Things went well for Moussa and Lamine and they’re very happy and thankful for that. Still, they know this is not the general rule and many face quite different situations.

There is prejudice, poverty, loneliness, and not all survive on their journey to Europe. But the story of Moussa and Lamine gives hope that at least for some leaving their country searching for a better life, they might actually encounter it here.