“Make people understand that whatever you’re doing for them, is not suddenly going to change the situation” says Donatella Rovera, Amnesty International’s Senior Crisis Response Advisor.

On October 14th, aspiring journalism and media students were invited to the Channel4 Television studio in Central London to attend the ‘Unreported World Student’ event. The event was organised by the NUS, Channel4 and Amnesty International, the non-governmental organisation that campaigns for the protection of human rights around the world.

It aimed to discuss the art of getting unique stories tin some of the most dangerous places around the world. Professional filmmakers, investigative journalists and researchers respectively from Channel4 and Amnesty International, were invited to talk through their experiences of working in the field, some of them for decades.

The half-day event was split into four different “workshops”, usually discussion panels covering topics ranging from how to report from some of the most neglected parts of the world, war or conflict zones to how to getting individuals to share their personal stories.

This event discussed all the ugly, non-desirable and dangerous parts of journalism and international NGO work, which for most of us had been grey and unclear. 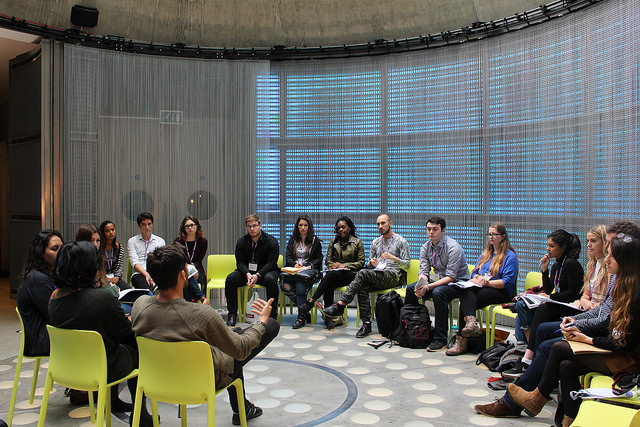 A group of students listening to the guest speakers at Channel4. [NUS via Flickr]

The guest speakers shared with us information they learned and gathered while working in the investigative side of journalism.

They all started by talking about their individual careers, backgrounds and the craziest stories they ever came across, some reporting from Syria, Yemen, Bangladesh or Kenya, just to name a few.

During the Q&A session, the professionals answered the questions with complete honesty, some gave tips about how to become ‘invisible’ when you are in danger and what to expect at checkpoints, and others spoke about the skill of finding the right balance between handling emotion and keeping your professionalism while dealing with people living with a trauma.

As the new academic year just started for most students who attended the event, Dorothy Byrne, Head of News and Current Affairs at Channel4, encouraged (or perhaps discouraged) the students by stating:
“If you want to be rich, well don’t be a journalist. But be a journalist because it’s the most beautiful job you can do.”

If you want to find out when next similar events are happening keep an eye on the EventBrite website. Meanwhile, watch the ‘Unreported World’ series of documentaries produced and broadcasted by Channel4 every Friday from 7.30pm.

Aurore is a third year journalism student at the London College of Communication (UAL). Her main interests focus on global human right and environmental issues. She is the co-founder of the 'Berlin Refugee Project' published on Tremr and the Deputy Environment Editor for the IPF.
Articles

By Shannon Casey
4 Mins read
Viewers of the new Blonde film on Netflix have major concerns about the way that women like Marilyn Monroe are portrayed.
News

Why students are boycotting Shein