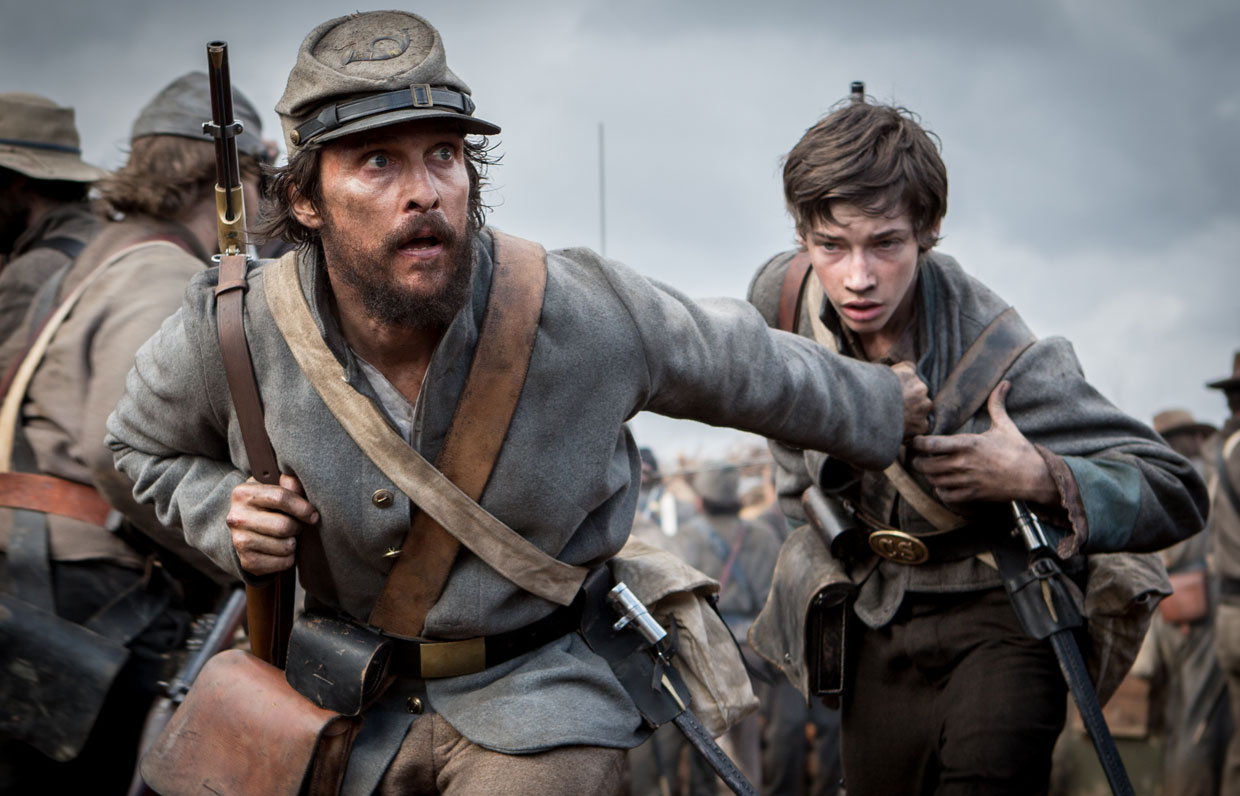 In a depressing era for American politics the true story of a Confederate soldier who turns his back on the Civil War with the help of slaves, should’ve made for resonating drama. Sadly, this war biopic fires a blank, despite some captivating performances.

Director and screenplay writer Gary Ross brings us the story of Newton Knight a humble farmer turned army medic, who deserting his post disappears into the woods to start his own makeshift community deep in the heart of Jones County, Mississippi.

Opening during the battle of Corinth between Union and Confederate forces, we find the bearded Knight (Matthew McConaughey) dodging bullets on the battlefield.

Questioning what he’s really fighting for and disillusioned by the bloodshed, Knight leaves the war disgusted by the poor’s fight to protect the interests of plantation owners in the South.

With the help of Rachel, Knight heads deep into the woodland swamps where he hides away with a group of runaway slaves led by Moses (Mahershala Ali).

Leading an armed rebellion against the Confederacy with more defectors from the army, Knight quickly establishes his own settlement declaring it the “Free State of Jones”.

What starts out as a promising tale about slavery, freedom and a fight for independence, quickly descends into BBC4 documentary territory.

At points, the film feels like its spoon-feeding its audience historical facts and is even interspersed with picture stills.

The issue is the overly ambitious scope of the film.

It covers far too much of an expansive and transformative chunk of American history, including the eventual victory of the Union, emancipation and the reconstruction of the South in the aftermath of the conflict.

It meanders through these periods, box-ticking Knight’s uprising, the attempts made to force slaves back into labour after their freedom, and fleeting signs of early Ku Klux Klan activity, complete with obligatory shots of burning churches.

It doesn’t help that at various points the drama is broken up by ill-advised clunky cuts to a 1950’s courtroom scene, about a family connection to Knight that would have been better summed up with a few paragraphs before the credits rolled.

There are notably strong performances from McConaughey, delivering speeches to his followers in trademark Southern drawl, as well as pulling off many a startled wild-eyed stare into the distance.

Gugu Mbatha-Raw is quietly brilliant, delivering a measured and tender portrayal of the woman who was to go onto wed the real Newton Knight.

A Confederate Lieutenant is played menacingly by Bill Tangradi, but his convincing, threatening demeanour is squandered with the highlight of his performance amounting to the stealing of corn for troops.

It seems to end three times before unnecessarily adding on an extra half an hour for archival context.

The attempt to shed light on landmark moments of the reconstruction period, including the emergence of freed slaves participating actively in politics, is resolutely represented.

But Free State of Jones stumbles into the age old pitfall of a biographical film. Sticking too closely to the facts makes for a plodding narrative.

Knight’s story may be essential viewing for those with a fascination with the period – but those with only a passing interest will leave the cinema feeling more drained than entertained.