All’s fair in love and art

With this in mind Artefact took to Brick Lane’s Old Truman Brewery to attend the 2016 Moniker Art Fair and The Other Art Fair, to examine what inspires today’s creative minds and what role they believe art has in society.

Rebecca Mason, an artist who works with neon and words, uses her everyday life experiences, like a song lyric that strikes a chord or something similar, to generate ideas and build artwork.

Speaking to Artefact, Mason said: “Everything I do is kind of about feelings and the world around me. So it’s all kind of based upon what I see and what I experience. It’s very kind of cathartic.”

It was her fourth time exhibiting her work at The Other Art Fair and before pursuing art full-time she was “stuck” working a “very corporate job” involving “spreadsheets and that kind of thing”.

Art was a way for Rebecca to express herself creatively.

When asked why art is important in today’s society she admitted that it was a hard question to answer for everyone because art has a different meaning for each person.

“For some people it makes them feel good to be surrounded by “pretty” pictures. For others it makes them think, but it’s just that escapism that art can give you which is key,” Mason told us.

She supports Rebecca’s point that art is different for everyone and says “that is what’s magic about it. I think art will always have a place in society. [It] inspires introspection within people and that’s sort of what [art] is intended to do.”

Charlotte first exhibited at the fair at only 23-years-old and admits that it was a learning curve but compliments the fair on its ability to make the process of viewing and purchasing art less intimidating.

“I think getting to meet the artist humanises the work for a lot of people,” she said.

To hear more about Charlotte’s work you can listen to our full interview with her:

Artist’s Goro Shimano, Trevor Harvey and Eliot Henning met each other at The Other Art Fair in 2014, they chose to share a booth this year.

Eliot, who’s originally from Munich, travelled down to London for the fair and from his perspective he thinks art is a great way to interact with others and explore your own creativity. 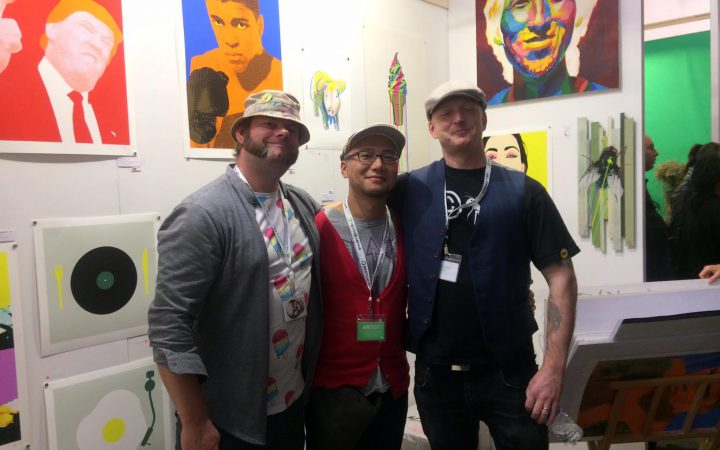 When we spoke to him, Eliot offered advice for younger artists saying it is good to take action yourself instead of waiting to be picked up by a gallery.

“You have to push it, you have to get outside, you have to see the reaction of the people. [Success does] not fall out of the sky, it’s [about] being active. You’re living in a time where as an artist you have the internet and art fairs like this [which] make it possible to get good exposure.”

Speaking about the fair Eliot explained that it is a great opportunity for him to travel abroad and obtain exposure outside of his hometown, Munich.

“London in particular is very interesting because it’s a very good city for fashion and art and it’s very different, you have different audiences. You have a lot of different people here. ”

Further supporting the importance of art in today’s society, research undertaken by the Arts Council found that “those who had attended a cultural place or event in the previous 12 months were almost 60 per cent more likely to report good health compared to those who had not.”