Tinder took me to Egypt

A man dressed in full military uniform stood at the door of a blacked out Mercedes. ‘Ella Wilkinsoon’ the sign he clutched read. Despite the extra ‘o’, undoubtedly the car was for me.

A vigorous wind flew directly at me forcing my clothes to stick to my body as I descended the stairs of my Egypt Air flight MS780.

One mundane Sunday, about a year before, I was dazedly swiping through Tinder.

My selection process wasn’t rigorous to say the least, however, I rarely even spoke to my matches.

Yet, that day I began speaking to a young medical student with a taste for adventure.

Is he real? I don’t know. Can I even ask that question in a world where 50 per cent of new relationships start online? How can I have to audacity to call catfish?

It was very possible that someone could pull on the heartstrings of a naive 17-year-old – I knew this, but I ignored it.

Regardless of the nagging possibility of false identity, I pursued my new attraction despite the fact he’d never showed me his full face on Snapchat.

He began to phase in and out of talking to me, claiming to be island hopping or travelling the world.

I found out his favourite term was ‘ghosting’, meaning leaving me in the dark about his whereabouts for prolonged periods of time.

Nonetheless, he amazed me with his stories of travel, his accomplishments and his interesting background.

In the Digital Marketing Report statistics, 80% of Tinder users apparently use the app to find a long term relationship.

With him always on my mind, I found any reason I could to contact him, sending him random photos and good morning messages.

I was a girl obsessed.

I began finding myself giddy when he texted me, I had told all my friends about him, and I could feel myself falling for someone I had never met.

So why was I debating even meeting this guy?

You don’t have to look far to find Tinder horror stories exposing the dangers of meeting people via the app.

I took to social media to find out some bad Tinder encounters.

“One night, when I was out, I started getting messages from [a Tinder match] saying he’s seen me in a pub. He asked me where I was going, I ignored it. Later on that night he approached me saying I’m obviously interested if I matched him, and kept telling me to come back with him, he’ll get a room in the local travel lodge. I said no. When I was leaving he followed me out and tried to get in my taxi. I knew something was going on, so I asked for my sister to wait outside my house for me when I got home. As I pulled up another car pulled up behind and he got out, luckily he saw my sister and was scared off.” – Zara Johnson* via Facebook.

As I pulled up another car pulled up behind and he got out, luckily he saw my sister and was scared off.

On top of the risks involved in meeting the person, there is also a high chance of the person not even being who they claim to be.

“I was in Lombok, Indonesia, and there was this guy on Tinder too good to be real 1km away. I suspected it not to be real but went with it anyway as I had nothing to do. So we set a place to meet, at the beach, and I didn’t find him. He messaged me “you just passed by me”. I keep looking. [He says] “You’re literally in front of me.” It was an 11 year old boy. I ran away and blocked him” – Elsa Barb from Facebook told me.

Maybe that’s why I was so apprehensive.

If I followed the rules of Catfish: the TV show, I would’ve ceased communication after having not video called or met within a few weeks of matching.

However, there was one huge problem; I hadn’t asked.

We did however exchange three phone calls during our year and a month of covert communication.

At least I knew he was a man.

Tinder was just a bit of fun, a laugh, a joke. It wasn’t serious and I had never got in this deep before.

This was uncharted territory and I was unsure about how to even approach the situation.

I was well acquainted with his travelling spirit and knew he would fly all over the world whenever temptation called.

In a way, I wanted to be more like him. I played my life safe, everything I did was methodically calculated. I wasn’t the free spirit I had claimed to him I was.

It came as no surprise to me, although in hindsight it should have, that he asked me to meet him abroad. 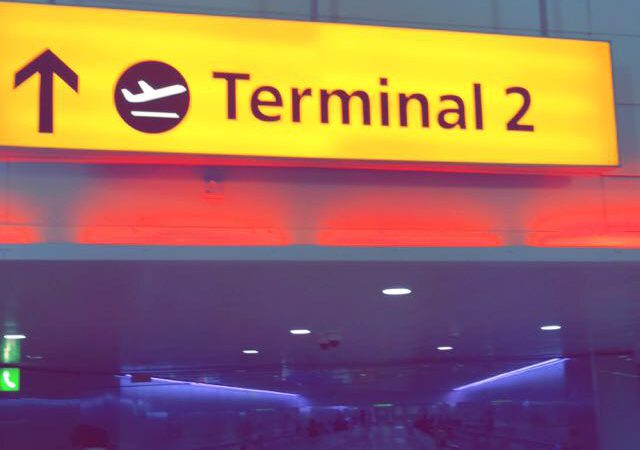 Almost without a second thought I obliged and began hunting for flights for myself – I was flying alone.

He made up some dumb excuse about why we couldn’t fly together.

I was a mix of excited and terrified. Still, I tried to play it cool, thinking any sign of fear was a sign of weakness. I texted him something embarrassing like: “Yeah cool, I’d love to”.

When I told my friends my plan to travel across the country in my search for love, twelve hours before my flight, they thought I was mad. They warned me of the dangers, which I cared little about.

I convinced myself that as I was 18 I could do whatever I pleased.

I got carried away with the adventure; I didn’t stop to look at the risks.

It is easy to ignore potential crisis but it can come at a cost.

“One night my friends and I decided that we wanted to get drunk. I invited the best looking boy I’d matched with on Tinder over to join.

He took a 40-minute bus journey to us. When he arrived he made himself comfortable and poured himself a bowl of coco pops. After a while, everyone had fallen asleep and I was sober and alone with this stranger.

He tried it on with me but I declined. He then proceeded to climb into my friend’s bed and asked her if she will sleep with him instead. After she declined, he made his way into the other bedroom, where my other friend was passed out, and he wedged the door shut. After attempts to open the door and demands for him to come out he finally did, after 10 minutes – I have no idea what he did in there.

I asked him to leave but he refused as his bus wasn’t arriving for another hour. This is when my third friend got involved. He started to get verbally abusive, calling her ‘fat’ and saying she ‘shouldn’t eat anymore’, threatening her with things like ‘don’t tell me what to fucking do, I’ll get mad you don’t know me’.  Eventually he left making as much noise as he could, throwing all the chairs about and slamming doors”.

Tinder hook-ups have led to many more bizarre and scary stories.

In the case of New Zealand couple Warriena Tagpuno Wright and Gabe Tostee; Wright never made it to a second date, ending up dead after meeting with her match.

The circumstances around her death are unclear, but it is known that she plummeted 14 floors from his apartment’s balcony after neighbours heard a “disturbance”.

Despite the risks, I boarded my flight, alone.

Now all excitement had evaded me; I was just a nervous wreck.

He arranged for some Egyptian military personnel to park on the tarmac and pick me up directly off the plane.

He told me his family were important people in important places so I wouldn’t have to go through passport control. Once a kind gesture, now a frightening prospect.

Where were these guys actually going to take me? As kids we were all told “never get in a stranger’s car”.

My parents forgot to add “and don’t fly across the world to go to their house”.

I sat in my cramped aeroplane seat shaking.

What have I done? I thought: “I’m going to die and my parents don’t even know where I am. They don’t deserve this!”

I didn’t even have the courtesy to tell the only people who have cared for me my entire life where I was going, but what could I do now I was 40,000 feet in the sky?

Thoughts were racing through my mind; I could vividly hear my friends telling me: “It could be a sex trafficking scam”, “What are you going to do if you get there and he’s not?” and “You could die!”

I could and it was becoming more and more apparent to me every second this was a genuine prospect.

It was a smooth landing despite the heavy head winds, gliding down the runway to a halt. The stairs were attached to the plane and the swarm of passengers waddled up the aisles. I did not.

I sat and waited, mentally preparing myself for whatever may be at the bottom of that staircase.

Along with the last remaining passengers trickling off the plane, I exited the aircraft. My misspelt name was held up on a sign. The car, although thick with dust, was a nice car. 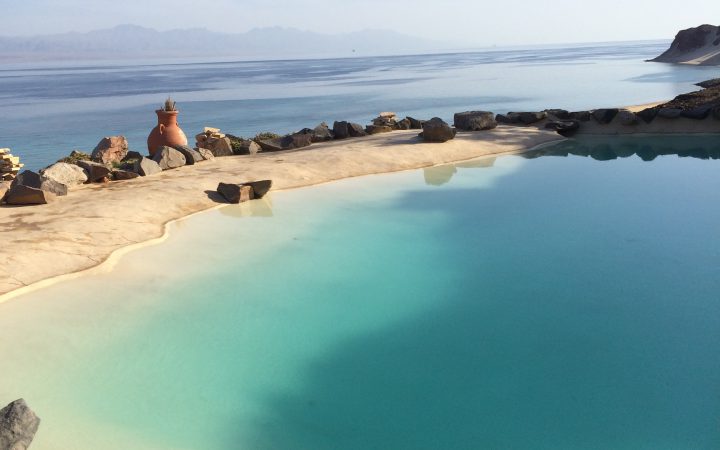 Albeit foolish of me, I counted my losses and decided trusting these men was my best option.

Regardless of the fact we could not exchange a single word of English they asked for my passport through a series of mimes, which I reluctantly handed over.

They dropped me off at the terminal building and I was escorted to a private lobby where I was given freshly prepared breakfast and a waiter asked me if I would like any coffee.

Sitting down to a plate of pastries and an americano I felt ridiculous for my previous trembling state, but I was still without my passport.

Consumed in a mix of anxiety, elegance and croissants, I decided to text my date; he was, after all, the reason I was here.

As the message sent, a man holding my passport and fifty Egyptian pounds appeared. He passed them to me and walked me into the arrival hall.

This is when I heard the familiar voice of my match shouting my name.

All anxiety, fear and stress left my body. I was elated.

Looking back at it now, two years later, it was the most foolish thing I have ever done, but also the bravest and most rewarding.

Today he is my boyfriend. 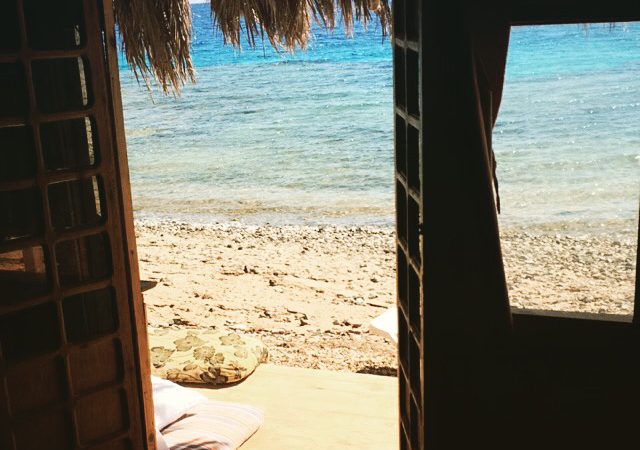 *Assumed names – the interviewees did not want to disclose their real name.

All Images by Ella Wilkinson