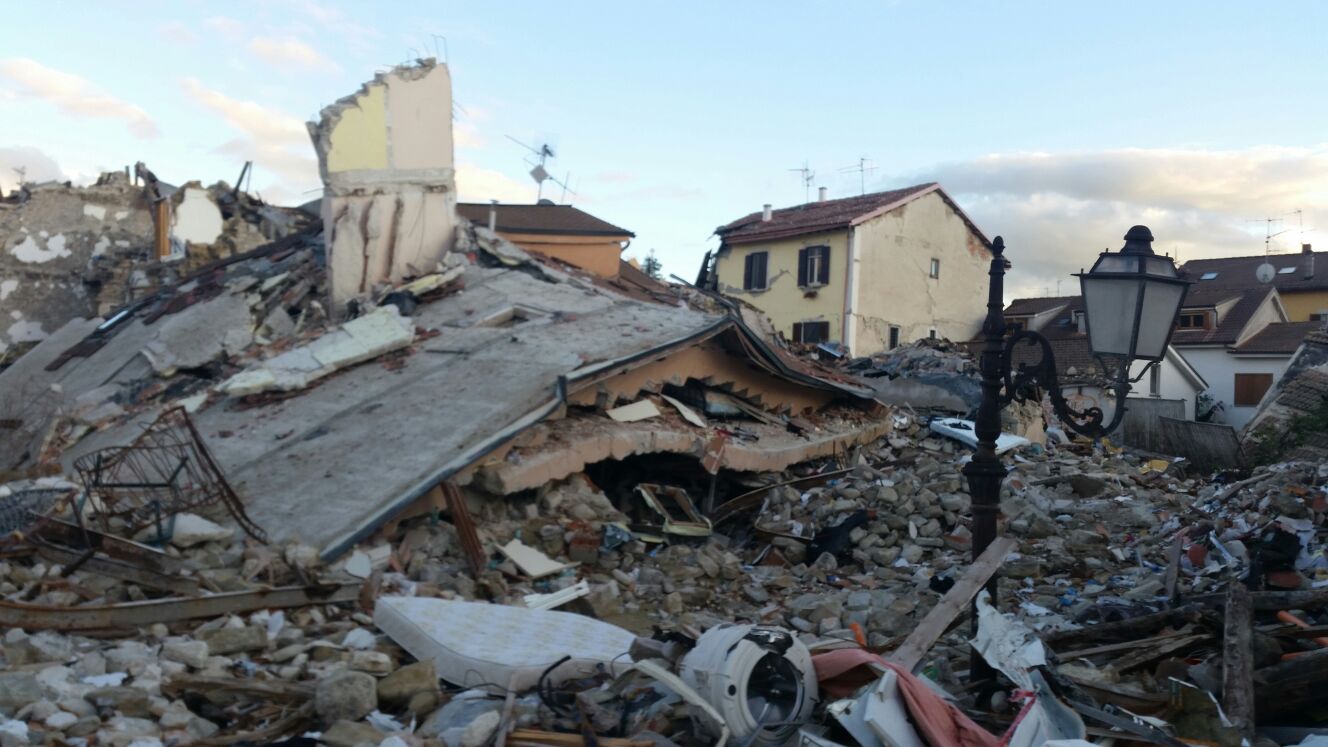 These shocking words were spoken by the town’s mayor in the immediate aftermath of the earthquake.

The 6.2-magnitude quake struck at 3.36am on August 24, 2016, razing homes, buckling roads and burying residents under the rubble in the hardest-hit towns of Arquata del Tronto, Amatrice and Accumoli.

Three hundred people died and dozens more were injured. Amid the debris of a town, the bell tower clock is miraculously still standing and it’s stuck at 3.39 – three minutes after the earthquake struck.

A severe earthquake can wipe out everything very quickly, destroying what you have built and loved your whole life in just 30 seconds.

Amatrice is well known in Italy as being the motherland of the bacon-and-tomato pasta sauce “all’Amatriciana”, with many tourists coming every summer for its annual festival celebrating the dish

The medieval hamlets of these three little towns were literally disintegrated, a millenary cultural heritage erased in a blink of an eye.

Dante’s Inferno was the background for the rescuers. 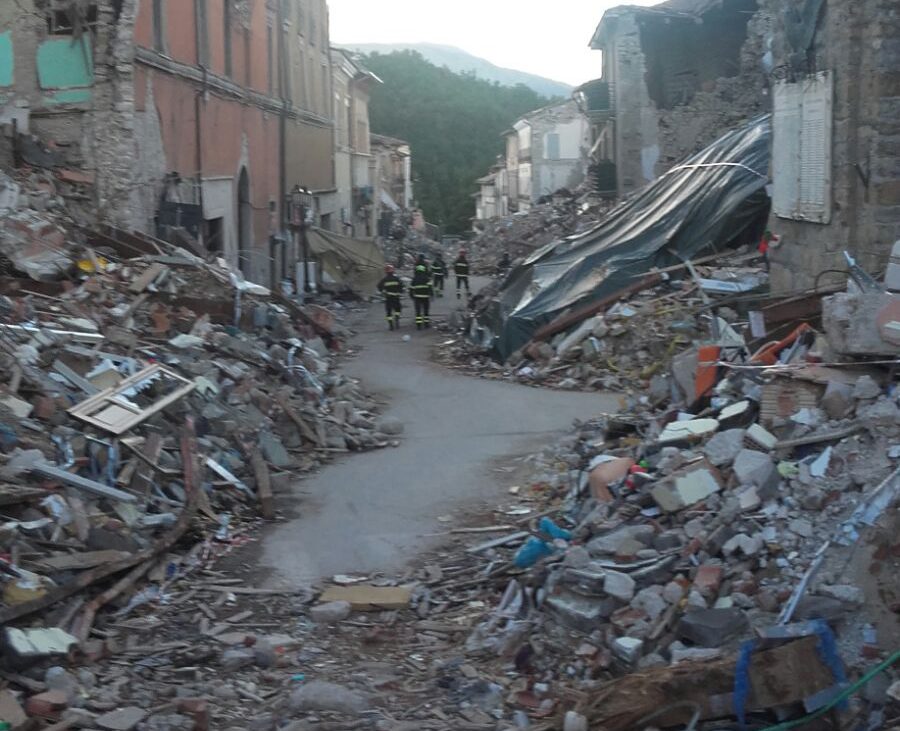 The centre of Amatrice was reduced to rubble [Luca Ciarleglio]

However, this earthquake has exposed Italy’s vulnerabilities and shortcomings in dealing with disasters and it’s becoming apparent that Amatrice’s earthquake-resistant structures were not built with the necessary protective materials.

Artefact spoke to the head of the Civil protection of Florence, Luca Ciarleglio, who carried out first aid and emergency services to the people hit by the earthquake.

We asked him why, in Italy, a 6.2 magnitude earthquake could cause so much destruction: “A 6.0 magnitude earthquake is really capable of anything in Italy especially in mountainous little towns such as Amatrice and Accumoli with poor building standards that led to the failure of many modern buildings in the earthquake zone.”

He continued: “The structures, both private and public, were almost almost all built in the late 19th Century and just a few of them in the last fifty years, these houses were all apparently strong and robust but , as a matter of fact, they did not have any possibility to to resist a seismic event.”

Speaking about the investigation, Ciarleglio confirmed: “The attorney inevitably found out that many houses were not actually reconstructed according to the established criteria in 2008 after the Aquila Earthquake, where three hundred people lost their lives and the damages amount to more than 10 billion euros.”

Given the seriousness of the Aquila Eartquake in 2009, the Italian government issued a institutional bill:  “Urgent Interventions in favour of affected populations after the earthquake with interventions to be carried out in the precarious buildings.”

The first purpose to be accomplished, with this money, was to apply as many interventions as possible to ensure public and strategic buildings were safe, including city halls, schools, public gyms and all kind of state buildings. 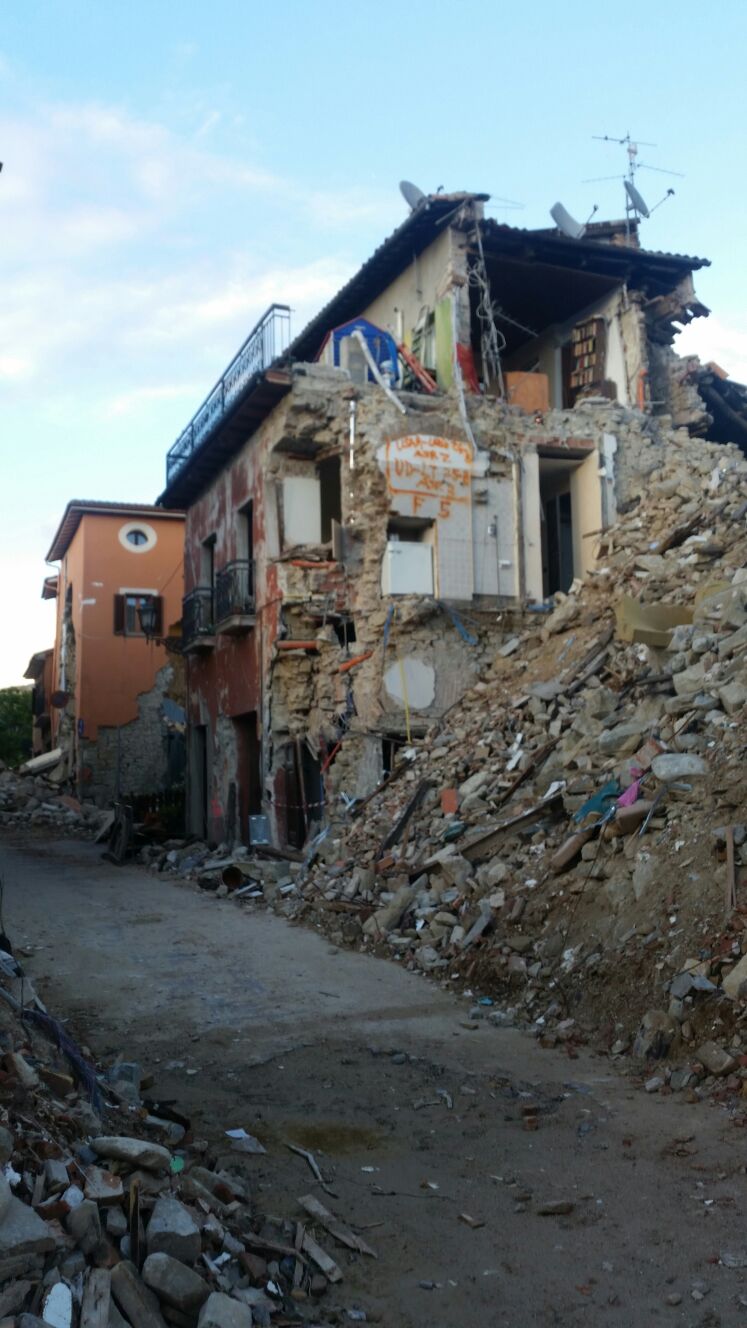 The second purpose, with the funding, was to invest in seismic improvement interventions in private buildings.

However the councils charged with doing this admitted that the “money was not enough for a thorough and proper reconstruction.”

“The modernisation works can take up to ten years and the fundings, allocated by the government, were clearly not sufficient for putting in safety all of the risky and crumbling buildings,” Ciarleglio told us.

Central Italy is characterised by a long mountain range and this presents many logistical problems; safety operations are unlikely to be carried out properly, especially in little mountaineous towns and medieval hamlets.

Amatrice is over 800 meters above sea level; the subsoil beneath the mountains is very unstable.

“Many houses were built on reclaimed swamplands, even after evaluating the potential risks predicted by future earthquakes, I suggest that responsibilities must be established as soon as possible in order to prosecute the people guilty of this human disaster,” Ciarleglio said.

The investigation found out that twenty-one buildings, supposedly reconstructed by the fundings given to the councils, collapsed anyway.

To the town of Rieti, 84 million euros were allocated for the reconstruction and the modernisation of buildings at risk.

The District’s Attorney of Rieti has already started an investigation to try and find out where this money were actually spent; it was found that 40 per cent of the total amount was invested to hire 800 professionals, ranging from civil engineers, surveyors and geologists.

Three experts were hired for any single reconstruction, determining a huge expense on hiring professional people.

To counterbalance this cost, it was found that local councils saved money by using cheap materials and not paying attention on workmanship. 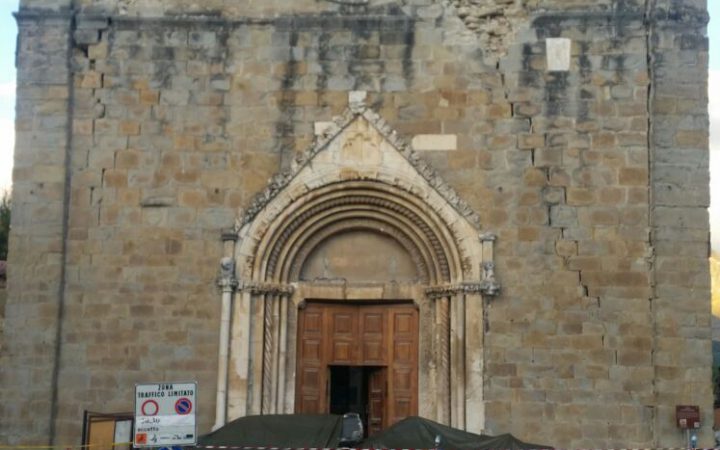 “The primary responsibility lies with the local council itself,” Ciarleglio confirmed. “In fact, they received a huge amount of money by the government but it is turning out that a good part of these money was actually diverted on other projects, such as the construction of a public park and public gyms.”

It happens every time that public funds are used by small local councils for repaying old debts.

This is what happened in Amatrice; local councils struggled to repay all of the debts and they used public funds, that inevitably reduced the amount of money that should have been destined for the renovation of dangerous buildings. 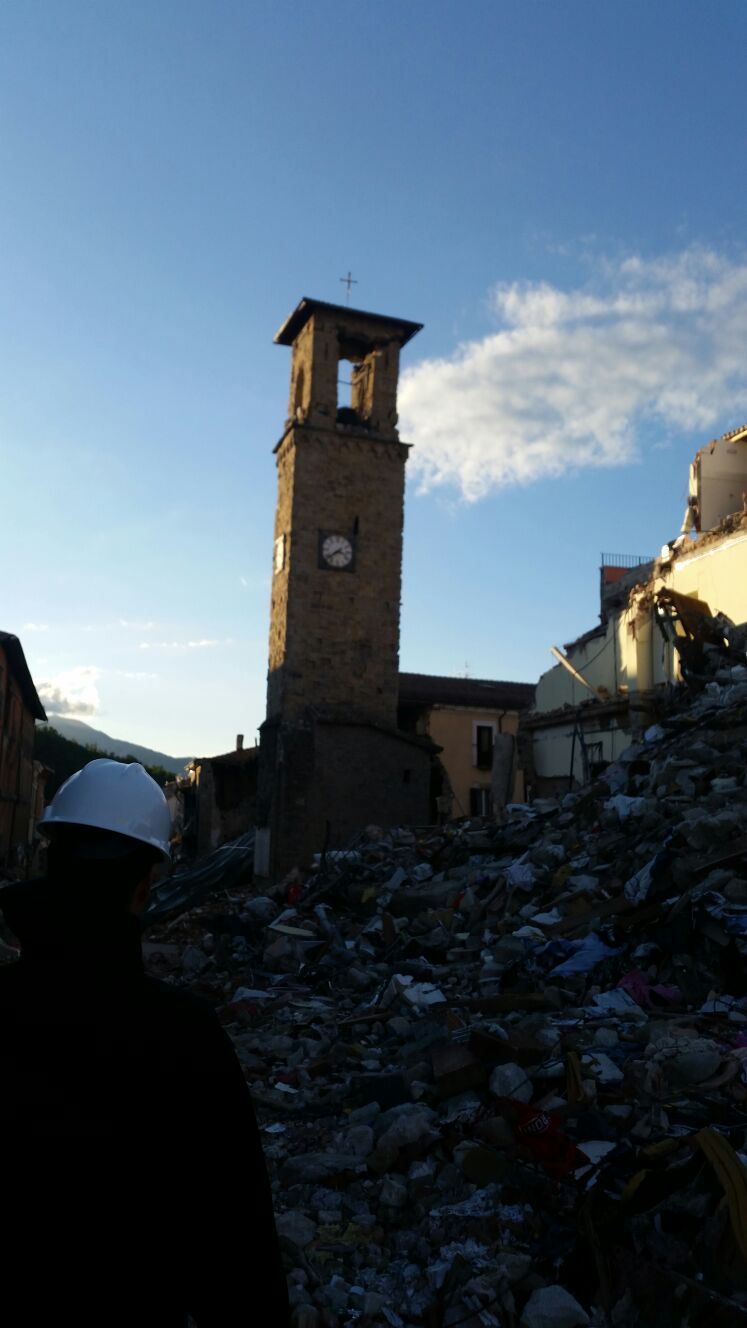 Having less money to spend forced the councils save money on materials and workmanship.

“This must be punished vigorously, because there are situation where human lives are at stake,” Ciarleglio told us.

Among the buildings that collapsed, the primary school Romolo Capranica created concerns, and local people have been wondering how this happened given that the city paid more than €700,000 (£600,000) in 2013 towards renovating the structure.

These improvements should have included high-tech safety features that were supposed to be in place in any public building.

The renovated building was inaugurated in 2012 after being rebuilt by a consortium of builders, Valori Scarl, but when investigators looked up the building code records, the seals and stamps that proved compliance were fabricated and falsified

So, the documents meant to ensure anti-eathquake protection measures in a primary school had been counterfeited and the school fell because of carelesness and negligence in the system.

Italian authorities also blame the Mafia for their involvement in such corruption, and it is known that after any earthquake, tenders are faked and contracts are awarded to Mafia-related companies, after the payment of huge bribes.

This is really the worst scenario that could happen after the earthquake: “As soon as I arrived to Amatrice, I immediately wanted to know what structures were supposed to be the safe-zones, (where people have to repair during a natural event), in an unfortunate event of an earthquake and I sadly discovered that Romolo Capranica school was one of them,” Ciarleglio told us.

The designation of the school, as a safe zone, has undermined the integrity of the Amatrice local council, as the school should have served as a warm and enclosed place to put the evacuees under shelter.

Societies, on behalf of the reconstructions of and the councils as well, must be inevitably investigated for contributory negligence, and many believe that Mafia infiltration in reconstruction works, is a potential threat.

Organized crime operations had been notorious for infiltrating construction contracts after the 1980 Irpinia earthquake near Naples in which more than 2,400 people died.

The risk of infiltration is always high. Post-earthquake reconstruction is an unmissable opportunity for criminal organisations and business interests.

There were also allegations that the Calabrian mafia or ’Ndrangheta was implicated in construction contracts after the 2009 L’Aquila earthquake.

“I personally think that the lesson has been learnt and we need not to commit the same mistake,” Ciarleglio said. 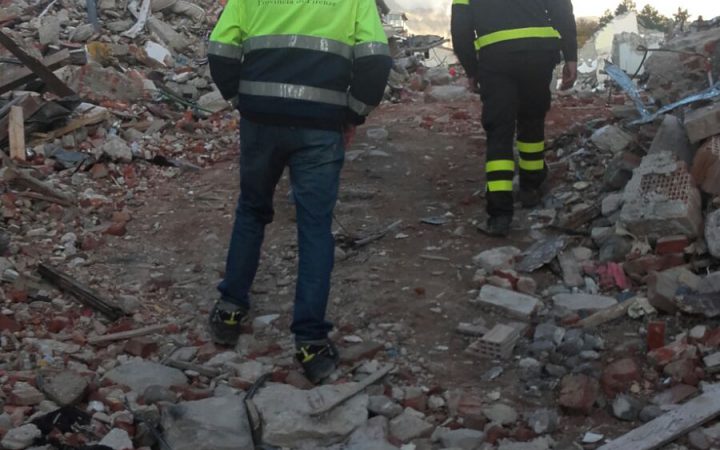 The destruction in Amatrice was extensive [Luca Ciarleglio]

Surviving an earthquake is an emotional burden that people must live with and carry it with them for the rest of their lives.

There are many people, especially the elderly, who are not able to overcome the fear of the moments that basically trap leaving them no loopholes when the panic hits them.

Benedetta Rastilli is a psychologist who specialises in how people deal with a traumatic, one-time event, like a natural disaster.

“At the moment we must act as the emergency requires. The first thing is to help the reunification and also, in cases of death of loved ones, the grieving,” she said.

“At all stages it is particularly important to provide the population with all relevant information to get in touch and manage their own emotional experience.”

As with the buildings, the people of Amatrice have a long and hard path to recovery from the earthquake in August.