Brunhilde Pomsel had a comfortable life.

Working within an influential hub of politicians, she had a healthy salary and job security much to the envy of her friends; she led an unquestioning “superficial” life.

For three years, she worked for her smartly-turned out manicured boss, sifting through paper files, organising meetings and typing as a stenographer. She says she was “apolitical”. Obedient, with a sense of duty.

Work was something that had to done without thought or question.

But Pomsel was no ordinary secretary. From 1942, she worked for notorious Nazi propaganda minister Joseph Goebbels at the heart of the offices of the world’s most abhorrent regime.

The makers of this cleverly-crafted documentary became aware of Pomsel during research for another project, but quickly found that they had a far more personal story on their hands with this intricate portrayal of how one Berlin-born woman came to find herself working at the heart of the Nazi propaganda machine.

She is now 105 years old and remains one of a small handful of people whose life was so inextricably linked to the terrifying reign of Hitler’s Third Reich.

The film is made up of a series of interviews with Pomsel who chronicles her life as it mirrors the obscene events of the twentieth century including the Nazis coming to power, the Holocaust and the eventual defeat of the German army.

Whenever Nazi-based documentaries are shown, there are lingering questions and issues that are left for the audience to ponder, most notably that of the soul-searching nature of “what would I have done?”. This film is no exception.

It is not the first time we’ve seen the tale of a Nazi secretary working as a small cog in a machine of grandiose evil.

The tale of Traudl Junge who worked directly for Hitler, was dramatised for the film Downfall in 2004.

But whilst that concentrated on portraying Hitler’s henchmen, this tale bypasses the dark fascination of these men and focuses on the simplicity of one German living unthinkingly and unabashed during this time.

Skilfully the filmmakers do not spend much time indulging in imagery of Goebbels – he is seen fleetingly holding a drink in Italy in a crisp white suit whilst being entertained by Benito Mussolini.

There are chilling excerpts of speeches from the propaganda minister though, with calls for Germany to engage in “total war”. 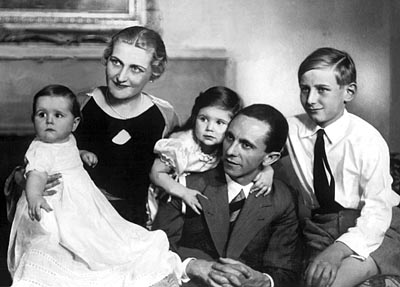 The documentary is interspersed with archive footage from army video reels depicting the horror that greeted those who liberated the concentration camps and realised the true extent of the crimes that had taken place.

For her part Pomsel is not remorseful – not because she doesn’t feel a sense of guilt for what happened to the Jewish people, but because she claims she had no idea what was going on. Whether or not she is to be believed is left for us to decide.

There are times when Pomsel smiles when recalling the memories of the ignorance of the period – she recalls the time Goebbels’ children came to visit at the office and being taken to a Nazi rally by her boyfriend at the Sportpalast.

Throughout the interview, which was pieced together through over 30 hours of conversation, Pomsel closes her eyes attempting to recall minute bits of detail.

For instance, when she is being told by her bosses not to look inside the case file of Sophie Scholl, the anti-Nazi activist, and the last time she saw her Jewish friend Eva Löwenthal who went missing during the war.

Whilst being shot completely in black and white gives the subject matter a degree of distance, this documentary cements its relevance by showing that political changes in attitude and acceptance in society, if unchallenged, can have devastating consequences.

Whilst it may make difficult viewing for some, the film manages to get its message across to the audience – that fear and blame can lead to a dangerous, divided society.