It’s strange getting up at 5.30am on a Saturday – it feels we should be going on a holiday – but we’re not.

We’re up at this time to catch the low tide, a reason that you probably wouldn’t immediately associate with central London.

However twice a day, the Thames recedes and reveals muddy beaches along its banks. This is what we’re going for.

People have lived on the Thames for over 2,000 years – the city has seen the rise and fall of the Romans, medieval kings and queens and was at the centre of an empire that ruled a quarter of the world.

During these times, the Thames was one of the busiest ports in the world, with hundreds of ships coming up and down the river, delivering goods and people to London every day.

Understandably, over the years a lot of things have ended up in the river that shouldn’t be there; whether they were discarded, fell off a ship or were clumsily dropped, there is no way of knowing how they ended up there.

However because of this, the beaches of the Thames are brimming with artefacts that belong in a museum and are just lying there waiting to be found.

At 6:15am we meet Dean Lennie – he is one of a small society of amateur archaeologists with a permit to use a metal detector and dig on the Thames foreshore, a group more commonly referred to as ‘Mudlarks’.

“I’ve always had a curiosity with the outdoor life. Since a kid really I think I’ve always been interested in digging stuff up, finding treasure, finding little time capsules,” says Dean.

Dean has been coming down to the foreshore for over ten years but has only been a licensed mudlark for four.

“I started coming down here like everyone else and started off finding sod all; but then you find something and it spurs you on and you start coming with more enthusiasm.

“The fascination for me with Mudlarking is that you’ll find a group of objects and they’re personal belongings. They may not be of any value, but from them you can conjure up a picture of people’s lives.” 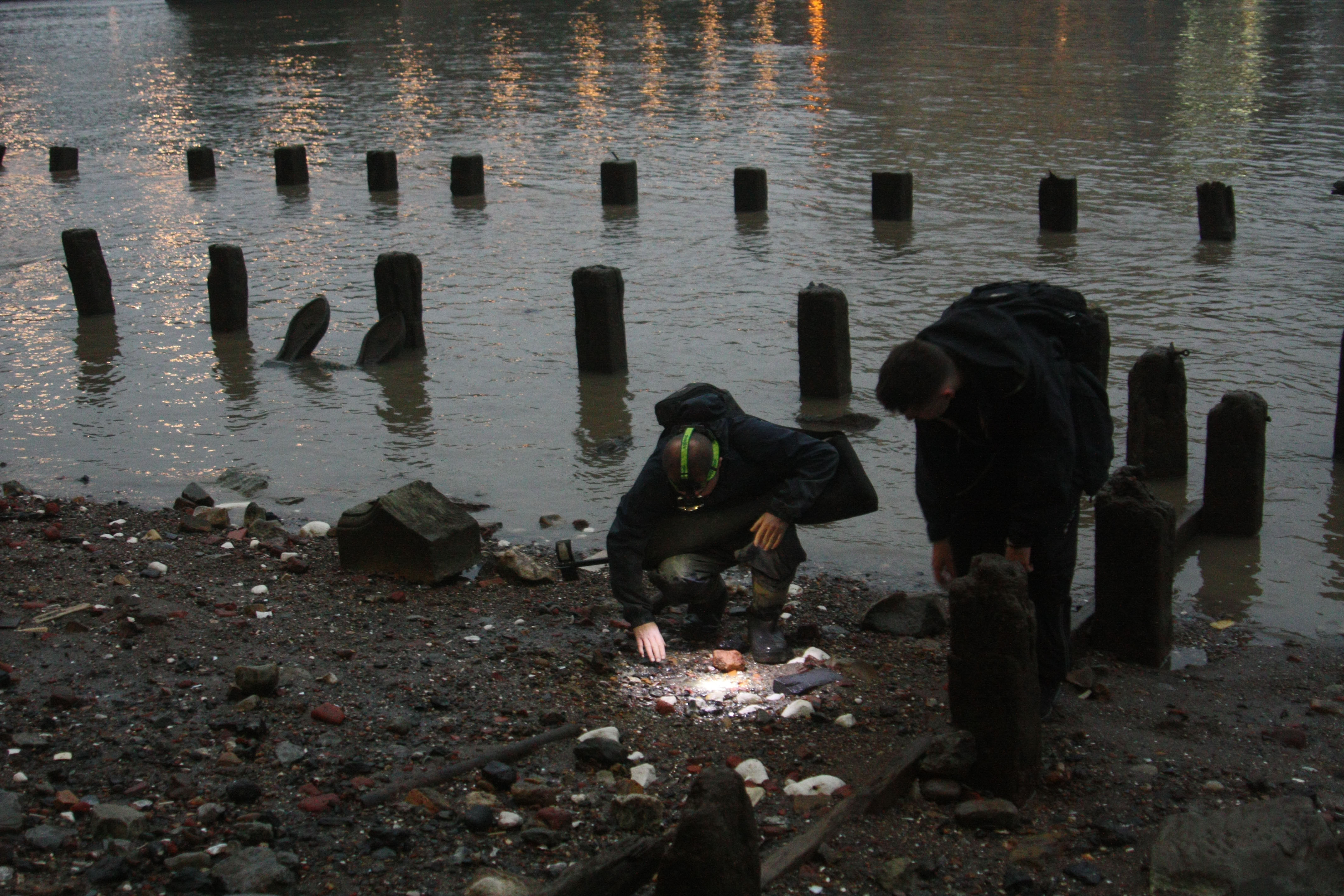 Dean gives us a quick tutorial in ‘mudlarking’

Everything that the mudlarks find can be identified and recorded by the Museum of London and the society is very grateful for their support.

“If it wasn’t for them we would lose so much,” says Dean. “We’re able to learn alongside the museum.”

As we were soon to find out, patience is the overarching trait of a good mudlark. “The association with being a mudlark is perseverance in my eyes and putting in the time,” says Dean.

Sunrise is still a while off when Dean takes us down the steps and onto the shore. We are at the site of an ancient dock on the North Bank that is as old as London itself and is one of the Mudlarks’ favourite spots.

Dean is a second license holder, which allows him to detect and dig a hole of 1.2 metres. The first license only gets you permission to detect on the South Bank and beginners like us can only look with our eyes on the surface.

Although Dean has extra weapons in his arsenal, his eyes are still his most important tool and he only digs occasionally. Looking down at the floor of mud, dirt, animal bones and rocks, finding a Roman coin has a needle-in-a-haystack feel.

“It’s something you learn. If I was to give anyone any advice it would just be get your eyes in and learn to use them, it’s the most important thing, then once you start noticing objects you’ll find it much easier to uncover layers of history.”

Some of Dean’s best finds have been with his eyes. These include badges from the Pilgrims, which are believed to have been thrown in the river as an offering before making the perilous journey across the Atlantic to the ‘new world’. 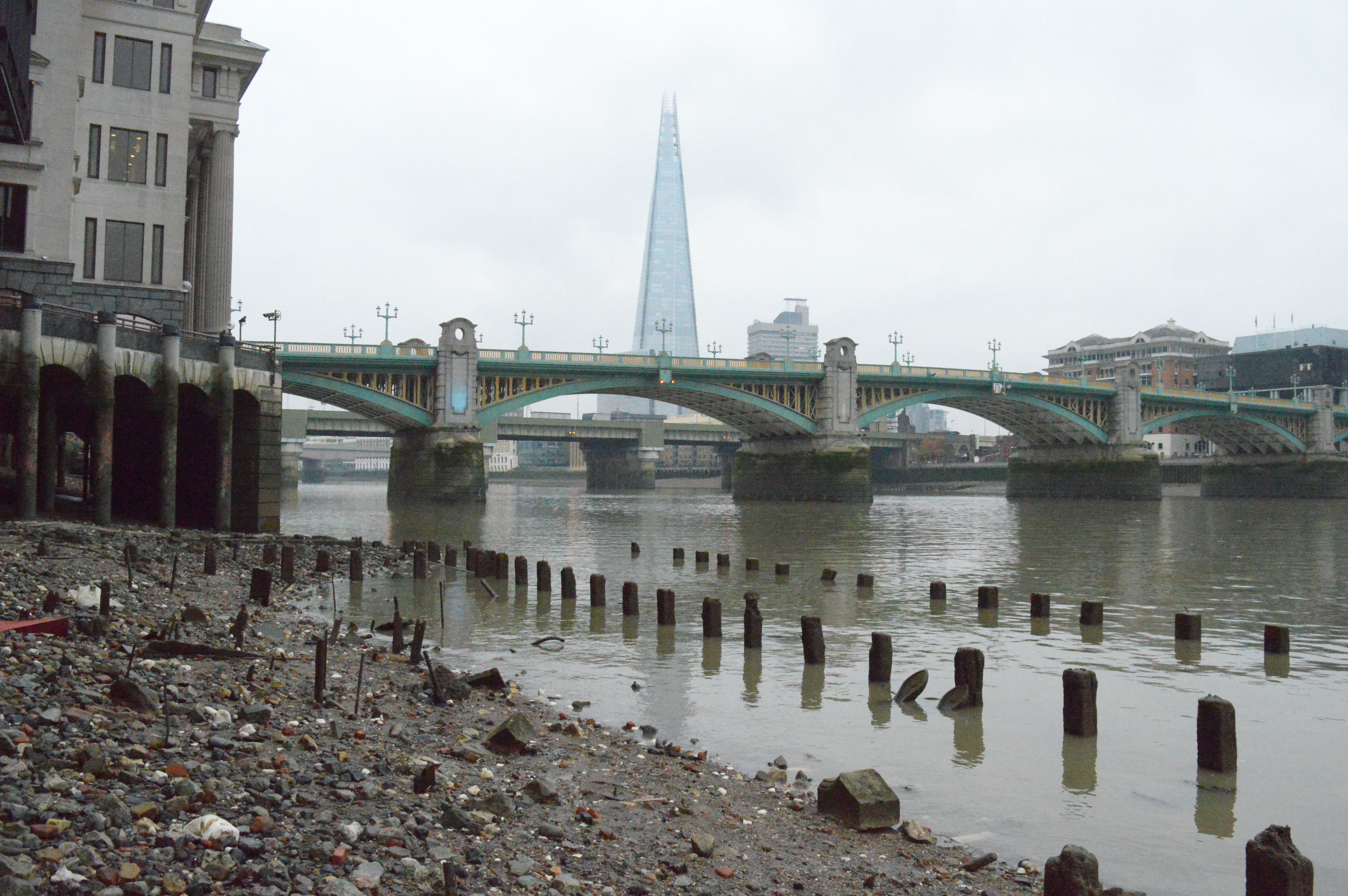 The sight from Queenhithe at dawn.

On the beach, Dean walks comfortably along the slippery mud while we shuffle awkwardly behind. He takes us to a good spot where he gives us a quick lesson, showing us how to look for the clear patches that indicate the tide washes it clear regularly.

Quickly, Dean starts noticing things that we would normally miss. I’m quite excited by finding a clay smoking pipe, but on closer inspection you realise the shore is teaming with them and that it’s essentially a 300-year-old fag butt.

Dean continues to give us advice, pointing out pins and fragments of pottery and giving us some back story and leaves us to it.

For nearly three hours we look around in the mud, picking up anything that we think looks interesting.

No Elizabethan doubloons, but plenty of pins, nails, shards of pottery and china (some with ornate decorations), whole clay pipes and some shiny pieces of washed glass. 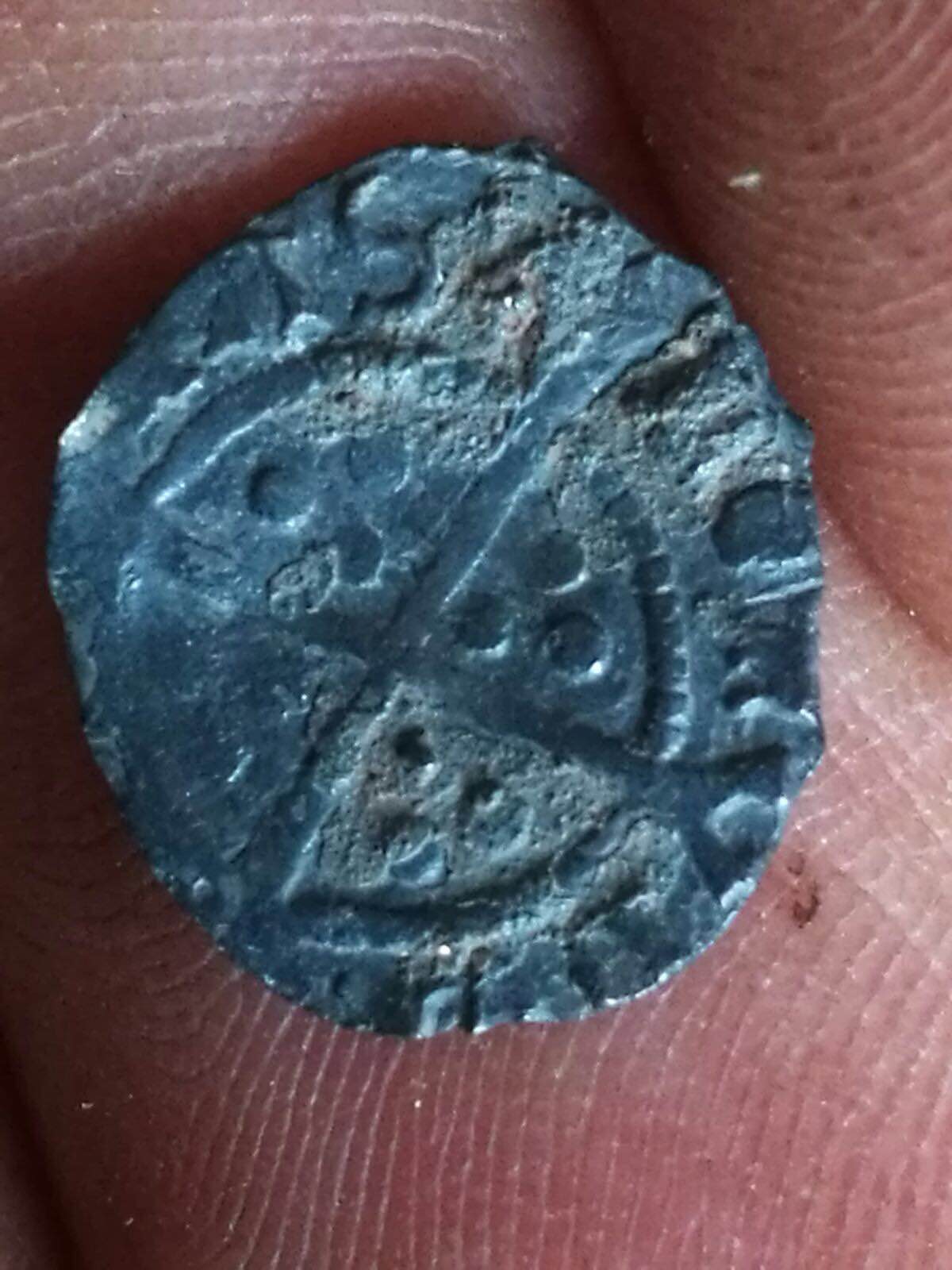 The medieval coin found by Dean

Daylight has broken now and we’re in need of breakfast. While we’re sat in a café in Camberwell, I get a call from Dean.

Dean tells us he has just found a medieval coin and a lead trading token. Both very good finds.

We should have stayed, but I guess we don’t have the level of patience Dean has worked up yet.

A few days later, we go to meet Jason Sandy. Jason is another member of the mudlarking community and the press officer for the team behind Thames Museum; a campaign group who plan to one day build a museum which will house all things related to the history of the river and become home to thousands of items the mudlarks have found over the years which are currently not on display.

“The idea started in 2013 and since then we’ve had a lot of amazing meetings with councils, local politicians and have been to parliament to discuss it with MPs. We’ve also been to City Hall with cannonballs in our rucksacks to show them some of the amazing stuff we find, it has been really well received and has a lot of support, we just need funding,” says Jason.

“The Museum of London has over 90,000 finds in their archives but are only able to show around one per cent of them. A Thames Museum would be able to display these artefacts permanently.”

Thames Museum has permission to build on Crawley Wharf in Greenwich, which is home to a disused Victorian pier. “The idea is to incorporate that artefact from the river into the museum and that’s where we launch the museum from.”

Recently, City Hall agreed to planning permission for the Museum of London to relocate in what will be a £72 million project, putting hopes of public funding for the Thames Museum on hold for the foreseeable future. 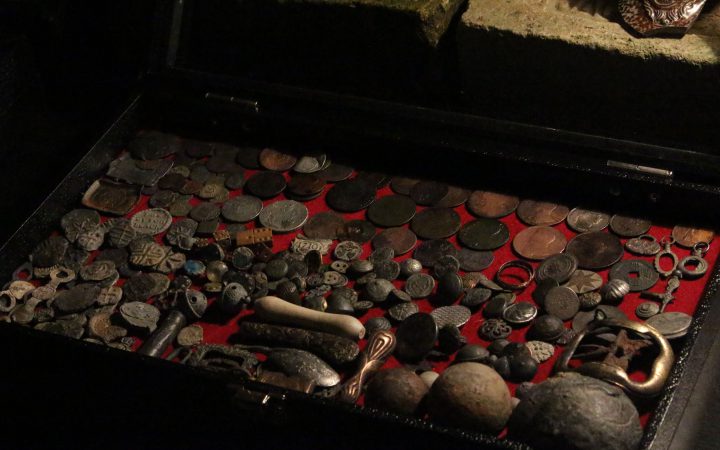 Jason shows us to a room where he keeps his mudlarking finds – the table is covered in cases and jars holding dozens of shiny objects including Roman coins, pieces of medieval knights’ armour and ornate Georgian toys to name but a few. He also keeps a record online.

Although our finds are much less exciting, Jason helps us to identify what we found.

The knowledge mudlarks possess is incredible. Just from looking at our meagre collection, Jason was able to identify and date nearly every piece of pottery and china we found; including the very design that a piece of Victorian plate was from and the story behind it, a small fragment of pottery we found could be dated back to 1680 and an old nail he tells us is made from copper and would have been used in a container for gun powder, as copper produces less sparks when struck.

Hearing the history and stories of these objects and being able to see complete examples of the bits and pieces we found transforms our collection from a box of random objects, to a hands-on history lesson.

This is what the Thames Museum is all about. 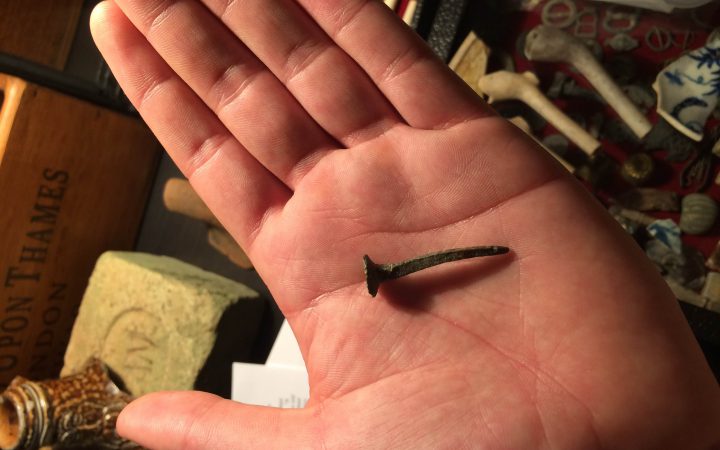 A handmade copper nail we found on the foreshore. Most likely used as part of a container for gunpowder.

“My wife thinks this is very disgusting,” Jason says as he hands me a small thin piece of wood with holes at one end.

“What do you think this is?” he asks. I tell him I have no idea and then he tells me that what I am holding is a Victorian toothbrush.

“My wife thinks it’s disgusting because 150 years ago someone had this in their mouth, but what it tells us is about London, hygiene and how important it was, you wouldn’t find this in the Museum of London because they don’t show this kind of thing. The whole idea behind the Thames Museum is to show these tangible objects that you and I would be using, the idea behind hands-on history is taking a normal object and telling the story behind it.”

The museum is currently fundraising and is now a registered charity. It needs to raise £12 million to buy the pier and to develop it.

Our experience of mudlarking for the first time was a real education and Jason and Dean would both encourage others to give it a go.

However, if you are planning to have a try, there are unspoken rules and guidelines to follow.

These rules can be found online at the PLA website or the London Mudlarks’ Facebook page. The main rules being that you don’t dig on the foreshore without a license and that you log anything you find which may be of any importance with the Portable Antiquities Scheme.

“That’s prevalent,” Dean told us on that Saturday morning. “It’s the unfortunate thing, everyone’s entitled to come down to the Thames, But how many people take home objects they find that they don’t record?”

These rules are made even more vital by the fact that if an item is not found during one window, when the tide comes back in it could be washed away and never seen again.

The Thames Museum sums it up perfectly on their website, saying the river is: “Where history changes twice a day.”

All images by Joe Skirkowski