Sex is great. If someone told you they could make you feel more confident and in turn improve your sexual prowess, you just might jump at the chance to sign up.

A bunch of people already have – whether its creams, exercises or taking masterclasses people are constantly trying to improve their sex lives.

Some even go a step further, with minor cosmetic procedures: dermal fillers into the G-spot (known as G-shots) to make it larger and increase sensitivity,and penis enlargement, which involves wrapping strips of soft skin tissue around the shaft of the penis, kind of like a jumbo version of pigs in blankets, to increase girth.

It is also possible to get PRP (Platelets-Rich Plasma) which is produced by separating blood platelets and stem cells in a centrifuge and injecting them into the labia and vaginal wall or the shaft of the penis, making everything appear plumper and firmer.

Much like the rise of labiaplasty, an opertaion which the NHS performs more than 2,000 times a year, the scrotum equivalent is here and is growing in popularity.

It is known as “scrotox”, which is pretty self-explanatory, involving injecting botox into the scrotum which makes it appear bigger in size and reduces wrinkles and sweating.

Although most of these procedures focus on how you look and may boost your confidence, your technique might still be awful.

The project was displayed in the Science Gallery’s #Mouthy exhibition, which looks at the mouth in ways which are far from the usual.

Kuang-Yi Ku decided to concentrate on the sexual uses of the mouth rather than the more mundane tasks it normally does, such as eating, talking, breathing.

“It made me think ‘Wow, the mouth has a function for sex’ which I never learned from a textbook on dental science. I graduated from dental school and I am also from the gay community.

“I feel that medical school is a really patriarchal system, so after my training in design school, I thought Is it possible to use artistic methodology to approach the patriarchal medical system. So I started to use a very sexual perspective to see dentistry.”

The idea began with a basic orthodontic retainer on the mouth’s upper palate, which Ku modified to have textured bubbles, but, of course this is removable and can be worn or not worn at any time.

Ku is currently focusing on the development of the skin tissue graft, which would mean there is no longer a need for the retainer and the textured bubbles would be implanted and remain a permanent feature in the mouth.

This is achieved by making several incisions near the tip of the tongue and wearing headgear which stretches the muscle until the tongue is at the desired length, after which is it allowed to heal.

Another part of the project is the Bird Beak Clone – this tries to tackle the issue of gagging, as it allows an individual to fit more of the penis (or even multiple penises) into their mouths before it hits the back of their throats.

It gets its name from gay subcultures of today such as Bear and Wolf which are branches of the ‘Castro Clone’ in 1970s San Francisco.

Ku told Artefact that pre-existing subcultures influenced his project: “There was a group of gay men who would gather in clubs who all looked the same. It was a very working class, masculine look, very muscly guys.” 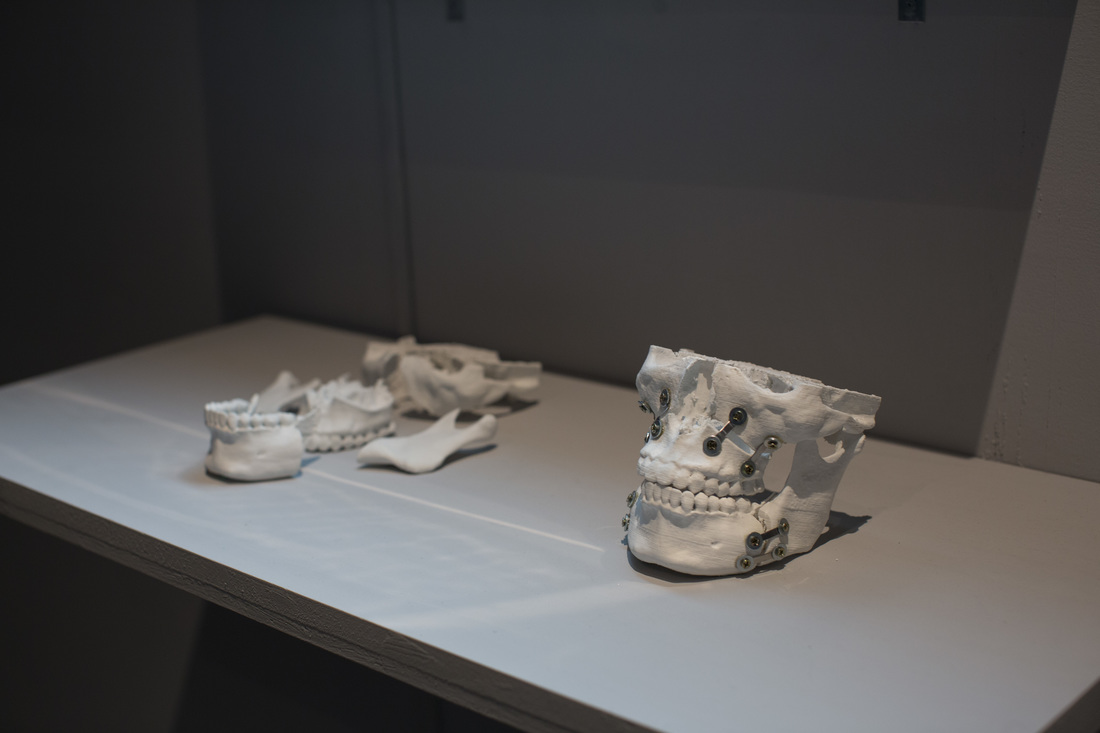 The surgery allows for extending the jaw bone and increasing the size of their mouth.

One of the project’s main aims is to tackle how society would interact with someone who has clearly had cosmetic surgery for the sole purpose of improving their sexual abilities.

Ku’s idea is that the surgery could also be a mark of what someone is into and in turn attract other people who are interested in the same sexual hobby without having to say anything.

Kind of like wearing an “I love giving head” sandwich board and walking around town.

Ku told Artefact: “I wanted to continue this history and speculate the future after people start using these technologies to modify their bodies and build up a new look.

“This kind of look shows a specific sexual preference: they’re addicted to oral sex or that they love huge penises. They would show their “dirty secrets” in their appearance.”

The final part of the project is a collaboration with King’s College dental students, Anisha Gupta and Carly Billing to create wearable sex toys.

Although, the sex toy also has another, arguably most important feature – protection from STIs.

It raises important issues that are often minimised when it comes to safe oral sex for lesbian or bisexual women.

It is not widely discussed that human papilloma virus (HPV), a potential cause of cervical cancer, is easily spread through oral sex and the ways to prevent it are not advertised particularly well.

As there are more than 100 types of the virus and it is so common that most sexually active men and women will have one of the types at least once in their lives, it seems that there should be more awareness surrounding it.

The only real protection available for lesbian and bisexual women performing oral sex are dental dams, but the information about how to use them properly is not readily available.

Dams are just a thin piece of plastic and they come with a very basic set of diagram instructions.

Of course, condoms come with a wide range of different flavours and textures which can enhance your sexual experiences, but these many options are not widely available for LGBT women.

Growing up in Taiwan, Ku had not had much exposure to an openly gay culture and likes to explore this in his work and told Artefact: “If I want to do a new project I want to connect to my own country, to build up a debate or raise a kind of environment where people will rethink the LGBT community and some sex or gender related issues.”

However, the artist still faces some hostility with many believing his work is too provocative.

“There is still censorship in our museums; naked graphics could not be displayed. My project was in an art festival show and the other 10 artists had the same size display area but my project was surrounded by a huge black curtain with an adult only sign.”

Gay marriage amendments passed the first legislative reading on November 8, so it is a fairly new debate in Taiwan. “It is a really huge debate. I think Taiwan is the most gay-friendly culture in Asia but it is still a big issue,” Ku told Artefact.

Although the surgerical procedures are not actually readily available, with his background in studying dentistry as well as working with scientists, Kuang-Yi’s vision is actually medically viable.

Ku told Artefact: “They are fictional future scenarios, but my project is built around hard science. We can use this technology to build these kinds of devices for people, so it is possible to apply these technologies.”

“The jaw surgery is completely possible; it is more like plastic surgery. It is difficult because there is an artery in the lower jaw bone, but it is possible.”

However, some are still in the works: “Some of the surgeries around tissue graft culture is not yet completely possible as it is within emerging biotechnologies. Many scientists are still working on it.”

The question, however, is how long will it take us to actually begin having a demand for the surgery.