Students are threatening to boycott the annual student satisfaction survey in a protest against the rising cost of education.

This spring the government published the higher education white paper titled ‘Success as a knowledge economy’ which introduced hints of further marketisation of education.

The reforms the students are protesting are mostly included in the white paper.

The National Student Survey (NSS) is an annual survey that is conducted on behalf of the UK universities’ funding bodies to determine third year undergraduate students’ opinions on the quality of their courses.

Universities in England, Wales and Northern Ireland are obliged to provide the contact details of their eligible third years but students can opt out of participating.

The National Union of Students (NUS) have voted to boycott the next NSS as an effort to protest about its links to Teaching Excellence Framework, which is one part of the government’s measures to assess the quality of teaching in further and higher education.

The universities that do well in the framework will be allowed to rise their fees by 2.8 per cent.

Starting this academic year, the NSS will be considered a part of the framework, but there is worry it might not reflect the student voice adequately.

“If you score your university high marks, your fees will go up. If you give your institution a low score you damage its reputation and it might just end up closed down,” says Anastazja Oppenheim from the National Campaign Against Fees and Cuts (NCAFC).

“The so-called student voice is being used to damage education and make it less accessible and essentially to damage our universities.”

According to Oppenheim, it is vital that we act now: “Students are people that are least likely to vote, they’re less likely to be politically engaged than a lot of many groups of the society, and that’s why we’re consistently being attacked by consecutive governments: this one, the previous one, but also some of the previous governments.”

For student activists, the stakes are high: “It will require a high number to participate,” Oppenheim says.

“Obviously there will be people on the ground. Activists who will be actually building for it. And there will be students who simply don’t fill in a survey. It’s the simplest thing of activism that there can be when you can literally sit on your ass and do nothing.” 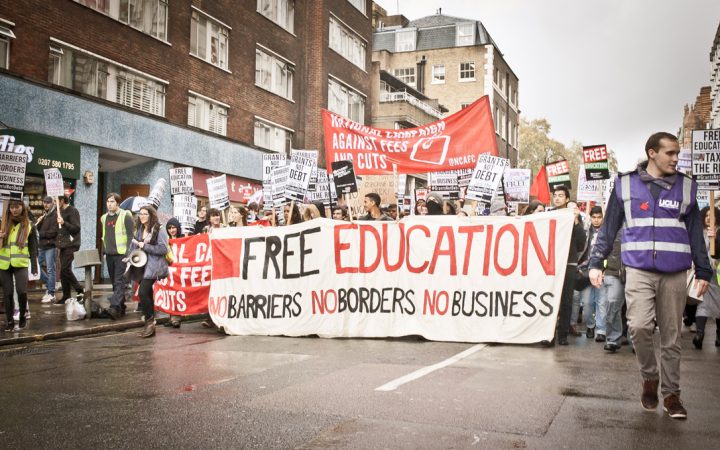 Students have protested for many yars about tuition fees [Glenn Harper]

For those who are more aligned to action, there is a lot to do. “For people who are interested in building [the boycott campaign], we have to put work into it. Just because it’s NUS policy doesn’t mean it’ll magically happen.

“It’ll very much depend on people on the ground doing lecture shout-outs, having as many individual conversations as possible, going door-knocking in halls, making videos, making banner drops.”

For student activists it’s important to raise awareness of the campaign to gather mass attention: It needs to be public knowledge that the student body are boycotting the survey and it isn’t “just a group of hacks,” says Oppenheim.

“We will need people on the ground,” she says. There is a lot of flyering to be done and conversations to be had in order to make the campaign into reality and making sure it has a presence on every campus. “If you’re at UAL, do talk to us. If you’re at any other campus with perhaps less supportive students union, hold them to account.”

Oppenheim encourages students to create their own activist groups on campus if unions decide to opt out. “It’s really easy without even having a lot of resources,” she says. “It takes two people to do a banner drop. It takes a couple of people to go door-knocking.”

NCAFC is at the heart of a campaign: “We don’t only do campaigning nationally, we also support each other.” One of their goals is ensure that “campus activists are never isolated”.

“We need to make sure we have a loud voice and not always a polite one,” Oppenheim said.

In addition, the NUS and the University and College Union, which repesents lecturers, collaborate to organise the United for Education demonstration in central London. According to the NUS, they are dmonstrating for “free, accessible and quality further and higher education.”

“I know students […] who started from going to a national demo and now are activists and they never expected that to happen before,” says Oppenheim.

NCAFC was founded in February 2010 to fight against the national union’s lacking reaction to the education reforms, the grassroots movement has since gathered together student activists that didn’t agree with the notion that student activism has become too aggressive.

Now, according to Oppenheim, they function as the “left section of the NUS”, and she’s compiled this list of what students can do to participate:

By Lauren Gordon
1 Mins read
In this podcast, we talk to two journalists about getting into industry after university and their experiences so far.
Life

By Lucy Pemberton
4 Mins read
The school curriculum is failing our children. Sarah Everard paid the price, how many more women will have to before enough is enough?
Politics

By Melissa Johnson
5 Mins read
We talk to education experts to find out how the UK education system treats working class students, and whether it is still fit for purpose.