Concern is growing internationally over a challenge to media freedom in Hungary after the country’s leading liberal newspaper was shut down without any notice.

The public widely believes that Nepszabadsag‘s closure was a political decision by the prime minister Viktor Orban and his conservative government, although they were told it was for economic reasons.

While the newspaper’s sales had been dropping, it was still considered to be the most influential political media outlet in the country.

Closing the newspaper has undoubtedly had a significant impact on the whole of the Hungarian press.

Within a day, Nepszabadsag‘s website was unavailable and the employees were unable to access their e-mail addresses.

They assumed the failure was due to the movement of the paper’s headquarters that was occurring on that day.

Later on, the journalists who went to work, could not get into the office – access was denied.

Their first thought was that it was a coup since they had no e any other explanation for such an unexpected and immediate action.

“We have no doubts about that silencing the biggest political newspaper, the most important representative of the democratic Hungary is the most evil misdeed of the Orban regime,” said Ferenc Gyurcsany, Hungary’s former prime minister on Facebook. 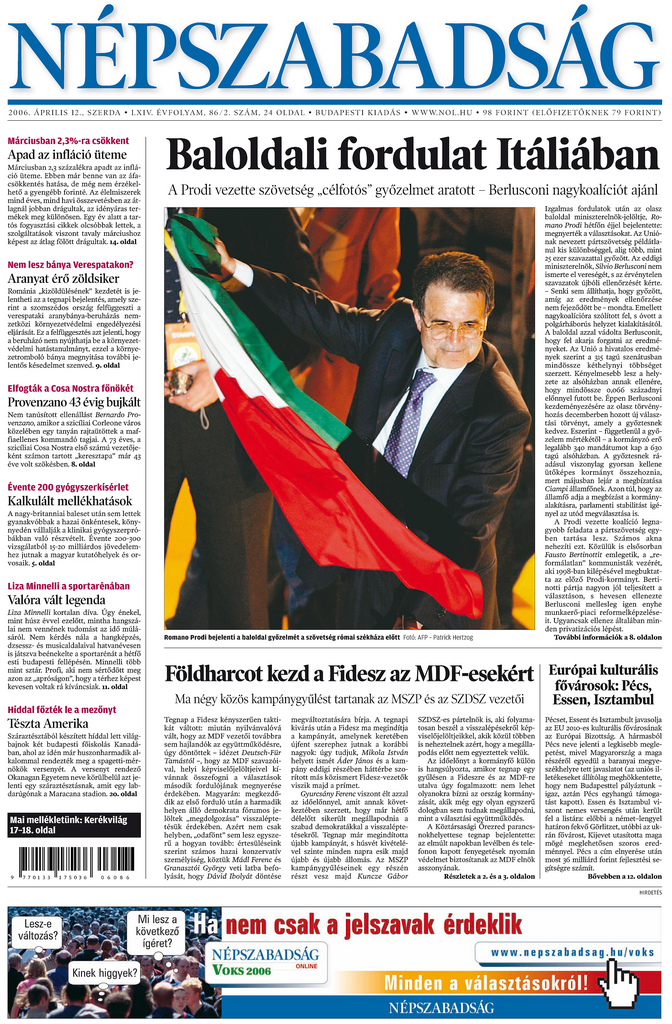 The website of the newspaper, nol.hu, has been unavailable since the closure and the web address only leads to a press release about reshaping the business model of Népszabadság:

“On 30 September 2016, Mediaworks acquired PLT. The company is now a truly regional publisher with a strong national foothold in sports and magazines,” a translation of the statement says.

“Despite revenue growth and management’s cost-cutting measures, Népszabadság has so far been unable to achieve economic success, and management’s priority must be to resolve this, finding the best future business model,” it continued.

Mediaworks Hungary is the publisher of Népszabadság and several other magazines, and it was recently accused of being a government-favoured company.

This theory has been fuelled by the purchase of PLT (Company of Pannonian Newspapers) a publishing company which owns 13 local, or county, newspapers.

Having influence on Hungary’s county newspapers can be crucial from a political perspective, while the closure of one of the biggest flagship newspapers of the opposition will have a significant effect on the media’s position.

“Since their allegations that referred to economic necessities did not survive the test of justice, it is very hard to think about anything else than a political action,” said Dr Marton Nehez-Posony, a former contributor to Népszabadság.

After being asked what he thinks about the current level of press freedom in the country, he said: “The media’s majority is under the control of the government, therefore the press does not fulfil its purpose. But from this perspective, I do not find the power’s effort significant in itself, but the social environment that makes it possible.” 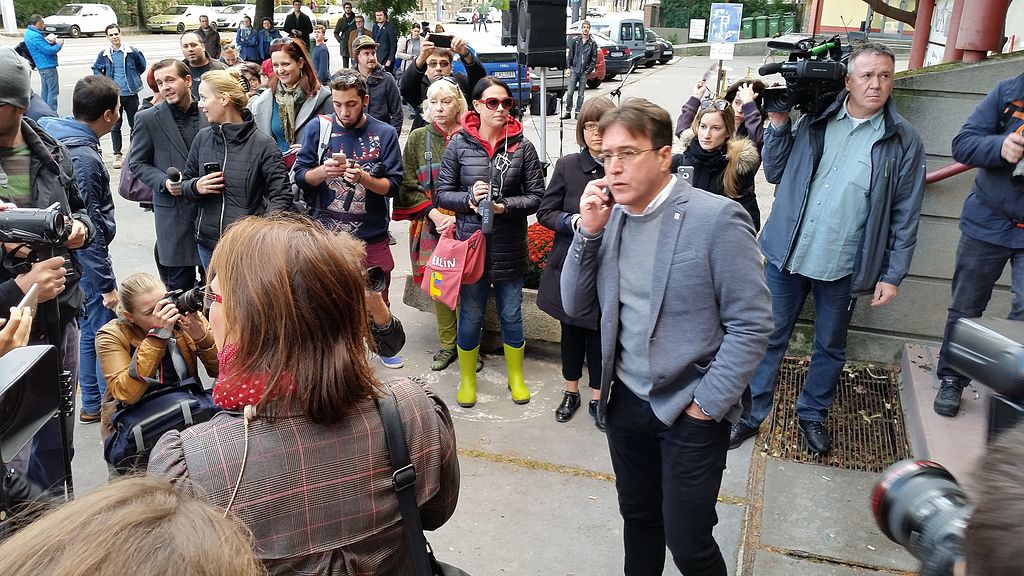 Népszabadság was the biggest political newspapers since its was established in 1956 – the year of the anti-soviet revolution of the country.

The newspaper has always had left-wing influence right up until 2015 when the Hungarian Socialist Party (the biggest opposition party) sold their shares.

Népszabadság, being a prominent critic of the government, has often published non-flattering articles about the ruling party, FIDESZ.

The press release does not mention any political influence about the decision on the suspension, saying: “Operating under its current business model, Népszabadság is adversely affecting the performance of the whole group and will continue to do so in the long term, unless it is put on a completely new footing.”

However the left-wing opposition parties, supported by other major media outlets of the country such as index.hu, Népszava, hvg, claim that it was a purely political decision disguised as an economic one.

The reason why many people accuse Orban and its party with political revenge is that his referendum on the obligatory migrant quotas, which was held just a week before the paper’s closure, failed because the participation rate was only 39 per cent, not the 50 per cent required by law.

The government spent more than 14 billion Hungarian forints (40 million pounds) on the campaign, which was a historic amount in the country.

It is a popular opinion that the backfiring referendum was Orban’s excuse for ‘revenge’.

On the day of the referendum, Népszabadság published several articles explaining the logic behind it, or occasionally pointing out its logical flaws.

This, combined with the constant accusations and investigations about MPs could have led to the closure.

Before the country’s referendum on immigrant quotas, they commented on the issue several times, and after the result, their leading story was about a cabinet minister, Antal Rogan, allegedly using government money to fund his luxury lifestyle.

The newspaper disclosed that the Minister was using a helicopter to travel to a wedding of a Hungarian actress, and claimed that according to the prime minister, the right wing can live in luxury as long as they don’t ruin the reputation of the party.

According to the paper’s editor, the following week’s lead article would have been a new scoop about Rogan.

Népszabadság‘s last issue also featured an article on the Governor of the Hungarian National Bank, Gyorgy Matolcsy, having a relationship with a women 30 years younger then him, who has been filling three state posts at the same time for approximately a year.

They also frequently criticised FIDESZ’s spending and their policy of privatisating state properties – the party did not approve of this so they found a way to shut it down without being actually involved in the process.

At least, that is the opposition theory, and politicians gave their views on social media.

“Killing Népszabadság is the biggest attack against the freedom of press and Hungarian democracy. (…) We support the editorial team in its battle, we feel solidarity towards the readers, the democratic side of Hungary and we are ready to participate in the battle for the paper,” said former prime minister Gyurcsany, on Facebook on the day of the closure. 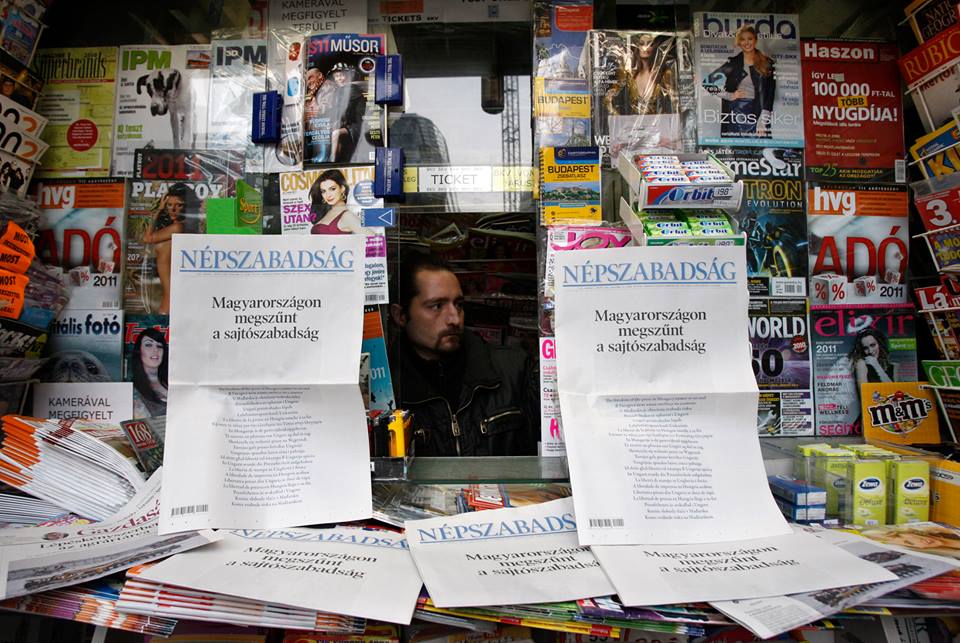 He was not the only one claiming it was a crime against democracy, and protests were organised immediately in front of the Parliament building.

Népszabadság‘s journalists were involved too, and while its official website had been shut down, they were able to make their own statements on Facebook: “The newsroom is united and wants to continue working together. Our aim is to maintain press freedom in Hungary, which is essential for democracy. We will resist any economic or political pressure that undermines it.”

Almost a thousand sympathisers protested beside them on the day of the closure.

The following day, another protest was held on the Szabadsajtó Út (Free Press Street), which had more than 10,000 participants.

Politicians along with supporters demonstrated against the increasing governmental control of the national media.

The civil supporters are not the only ones who suspect a political agenda behind the decision.

Even radical right-wing politicians from the radical-conservative JOBBIK party accused Orban of trying to create a monopoly on the media.

It has not been the first time that heavily FIDESZ-influenced companies monopolised a major media outlet in the country.

In January, one of the major public television channels, TV2 was bought by Andy Vajna, Hungarian film producer and investor, who had been on good terms with the Prime Minister.

In 2015, one of the biggest online news outlets, Origo, went through a change of ownership – it was connected to Deutsche Telekom via Telekom Hungary, and its editor-in-chief was fired after publishing revealing articles about FIDESZ MPs.

Since then, the website has stopped actively criticising the government.

“TV2, Origo, Népszabadság – major opinion forming mediums are landing in the arms of the government year by year (…)  I can see where this process is leading to and what is waiting for us at the end of the road: 1 or 2 blogs being sponsored by Soros versus the FIDESZ monopoly news,” said Janos Bencsik, the international politics spokesman for JOBBIK, referring to George Soros, a Hungarian investor who is known for being openly against FIDESZ.

The international media also raised concerns about the closure, and the effect on freedom of speech in the Eastern European country.

Viktor Orban has previously shared the views of less liberal countries, such as Russia or Turkey, so the accusations of the Hungarian political system being non-democratic are not without merit.

After the protest on October 16th, FIDESZ spokesman, Gergely Gulyas held a press conference where he repeated that the closure was a financial and economical question, rejecting the opposition’s view.

In a governmental press release the ruling party put the blame on the previous government, MSZP (Hungarian Socialist Party) for the “failure of their own magazine”.

However, the fact that a press conference was held on the issue is a suspicious, considering FIDESZ claim to have had nothing to do with the issue, saying it was a decision by the newspaper’s owners.

In the past few weeks, the situation in the Eastern European country has been tense due to the recent referendum along with the closure.

The future of the paper is still undecided, and it will most likely remain so for a while.

“The consequences mostly depend on the aforementioned social environment. If there is a serious demand for an independent, objective medium that monitors every government, then yes, there will be one,” said Dr. Nehez-Posony.