It is pouring rain and the Uber driver had the radio on full volume; people are worrying across the pond.

If the early hours of this day are anything to go by, the news won’t be good.

I open my laptop with a feeling of unease in the pit of my stomach.

I go to bed before 4:00am nonetheless, hoping the world we live in cannot allow a Reality-TV personality with no consistent experience in politics to take control over one of the most influential countries on the planet.

I haven’t got much hope.

At 8:00am on November 9. I wake up, confused. I wait a few minutes before I turn my phone on, afraid to see the news. Afraid because I have gradually been losing faith in humans.

And there they are; posts of disbelief on social media. The news outlets I follow announce reluctantly that Donald J. Trump will be the 45th President of the United States.

On this day, I stopped putting any hope in humans.

Originally planned to take place on Tuesday, November 8, the group had to postpone the session by a day; was it a coincidence, or was it bound to help cope with the profound despair some of us have felt waking up that Wednesday morning to the news that Donald Trump would be governing the world’s leading power for the next four years?

We spoke to Alice Strick, the founder of Arts Sisterhood, and to Alix, a participant at the event, as well as to Cynthia, a student in another country, in order to understand how our generation can cope and try to make things better in times when everyone seems to be losing control as 2016 is becoming one of the darkest years of the decade.

Or so we think.

In times in which we are still trying to overcome issues of inequality within race, gender and sexuality to name a few – which are efficiently enhanced by the political events of 2016 such as the refugee crisis, Brexit and the US elections and the hate that these have generated – it doesn’t come as a surprise to observe a particularly low mood within the younger generations.

The ongoing war in the Middle East and the terror attacks on European soil also have their part of responsibility in injecting a good dose of fear and hopelessness in a group of people who were taught that after 1945, mankind would have learned from their mistakes.

Young Westerners perhaps naively thought they would never have to live through such atrocities themselves, blind to what was already going on in more distant countries, but which would only catch them up eventually.

“We’re a generation of impatient immediate consumers, and we can have everything we want when we want it and it teaches us strange and unrealistic values.”

Besides the obvious worries 2016 has brought, Millennials often feel helpless, which can lead to issues of depression for many people.

This is what drove Alice Strick to found Arts Sisterhood UK, her project of free Art Therapy classes for women and anyone identifying as a woman.

She feels that our generation is particularly doomed in contrast to older ones.

“The way Millennials have been raised is toxic to our mental health. Internet, social media, smartphones, computer games, TV, fast food, celebrities, media, drugs, all of these things we have now, that our parents didn’t really have, are rotting us because we’re a generation of impatient immediate consumers, and we can have everything we want when we want it and it teaches us strange and unrealistic values.”

Alice is a long-term sufferer of mental illness, including Borderline Personality Disorder, Depression and Anxiety. She told us: “I was in a position a while ago where I felt very lost and empty and I was told that helping people or giving to people would help to heal me.”

Having volunteered at various mental health support groups and having taught art to children, which she says proved to be beneficial not only for the children but for the volunteers as well, she decided to make something out of both support and art. 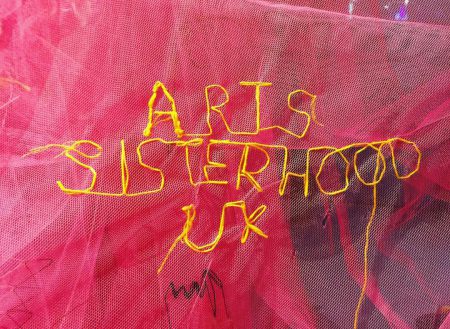 She sought to create a place that would include all of the following: “[be] free or cheap, cool venue, great people, a safe space away from men, friendly atmosphere, a bar with cheap drinks and food, the chance to socialise as little or as much as [you] like with people, nobody telling [you] how [you] could improve or better [your] work, and a chance to just express what’s inside and experience catharsis.”

Excluding men from her project was crucial to her because she feels that women and the female-identifying are oppressed, “especially with mental illnesses and especially in the art world and the creative industries”.

She says: “I have been involved in art and design industries for a very long time and it’s all male dominated and for once I want to be away from that.”

“I feel like to truly help the oppressed you have to elevate them and give them their own space to take up. I exclude men because everything is already their territory.”

“If we all show some solidarity toward each other, it will help us all feel less lost and scared.”

She believes a lot of women feel unsafe around men, and her worries were confirmed after having explained her project to a male friend of hers.

“[He] made a sick joke about being able to chat up a load of vulnerable women with low self-esteem and score easily.”

She says that she understands this isn’t the case for all men, but she’d “rather be safe than sorry”.

The girls-only art therapy class began with the participants standing in a circle and introducing themselves to everyone.

They were asked to say how they felt on this particular day where more than half of the population of a huge country decided that a racist, sexist and homophobic business tycoon would suit the job of president.

Alice believes it was “hugely important” to mention the American elections: “It wasn’t just a bad day for American women, it was a bad day for the women of the world.” 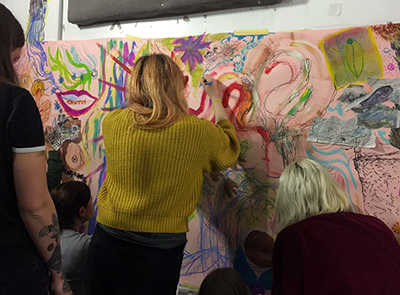 According to her, “it was one of the world’s biggest nations validating sexism, racism, homophobia [and] islamophobia”.

She adds that as a woman of colour, “it was painful for [her] to wake up and see the result [and she] felt heavy, angry, upset, exhausted”.

She wanted to make November’s Art Therapy class about this event because she thought: “If I feel like this, then every other woman must feel something similar too. It was all everybody was talking about, and I feel like people needed to get how they felt off their chests.”

She adds that she also felt like “if we all showed some solidarity toward each other, it would help us all feel less lost and scared”.

Out of the dozens of girls participating to the class, only one in the circle said they saw hope in this mess.

Alix, 21, an Illustration student at Central Saint Martins, says she sees this as an opportunity to fight even harder in order to make things better.

“I don’t like to be pessimistic and I think it’s not the right time to be desperate. We should rather have faith in our own generation and realise that WE are going to make positive changes.”

She emphasises it is important to stay positive, saying: “Negativity brings a state of depression or aggressiveness, and it’s the opposite of what we need today”.

In spite of the results, she also thinks we need to remember that Trump didn’t take power but he was elected. “We need to consider the people [who elected him] or the world will be divided and it will be worse.”

She cites Tomorrow (2015), a French documentary film which offers an optimistic point of view of what the future holds for the world, saying that despite all the evil which is predominantly showcased by the media, we need to remember that a lot of great things are in the making as well.

Cynthia, a 22 year-old Law student in Zurich, Switzerland, shares this point of view.

Upon discussing with her what worried me nowadays, from small-scale to global scale, she urged me to remember to never give up and stop putting my focus entirely on the negative aspects of life.

“There are millions of people who do good in this world, who fight for freedom of speech, for nature, for animals, for the refugees and so on.”

“It’s easy to feel hopeless with everything we hear, but you need to see everything else too. It’s terrible to say, but focus on yourself first and what you can do in smaller scale around you.”

She says everything is always centred around what is bad, “but there are millions of people who do good in this world, who fight for freedom of speech, for nature, for animals, for the refugees and so on”.

Having gone through darker times where she felt hopeless, she one day decided she was tired of seeing everything negatively and worked to change her vision of the world.

Hoping to work in Environmental Law one day, she developed an eco-conscious lifestyle and is now a vegan.

She never tries to lecture meat eaters and she respects everyone’s own beliefs and lifestyles; she simply chose to give up on animal products in order to put her own personal efforts into the world.

“Negativity brings a state of depression or aggressiveness, and it’s the opposite of what we need today”

Today, I feel less scared and I have decided to put a bit of hope in dedicated people.

Yes, 2016 has been eventful and relentless. But yes, we can stick together and give up a bit of our pride and start making changes around ourselves first, little by little.

It is easy to give in to fear, but we need to remember that fear is also the foundation of hate and is what allowed things such as Brexit or Donald Trump to happen.

We fear the unknown and too often we act spontaneously, without thinking our choices through.

In order to go forward, we need to cut negativity off from our lives – we need to stick to hope and stay on top instead of giving priority to those who are prone to shatter our world.

Perhaps these events are, in the end, the premises for bigger and better changes.

The world doesn’t need our anger nor our tears.

All images by Arts Sisterhood UK