Albums and tours: The word of G.O.D.

Opening for one of heavy metals most popular acts on the circuit can’t be an easy task – people have only just got through the doors; the beers have to be bought and there’s merchandise to buy.

People haven’t paid to see you. Everyone’s waiting for the main attraction which, in this case, is Lacuna Coil, currently touring their critically renowned album Delirium.

But when Genus Ordinis Dei, or G.O.D. took to the stage just after 6:00pm on a lively Friday night in Camden, people flocked to witness an epic orchestral symphony booming ominously out of the speakers.

The band take to the stage clad in matching hoodies like extras from Game of Thrones.

“Are you ready London?” screams frontman Nick as hundreds of fans give an end of the week cheer and stick devil horns in the air.

Earlier that afternoon I had been walking around the corner of KOKO in Camden on a chilly November day and already there were clusters of black-shirted metal fans sitting patiently on the venue’s doorsteps, clutching coffees, desperate to get onto the front barrier for the main act, Lacuna Coil.

But I’m here to meet tonight’s support band Genus Ordinus Dei – I’d been practising their name outside, repeating it to myself nice and slow.

Seven months ago, sat around a table in Milan, the band were hand-picked to support Lacuna Coil, a gig most young metal bands would give their right arm for – now here they find themselves in the UK for the first time on a major tour. 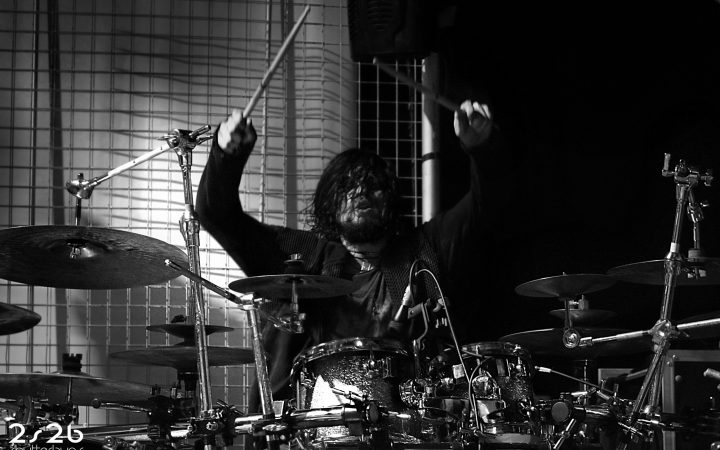 I’m ushered through the stage door where I meet bearded drummer Richard.

After meandering our way through twisting staircases we find ourselves in a tiny dressing room where Nick is relaxing on a couch. The others are presumably chilling elsewhere.

They tell me it’s the Italian connection that got them this gig.

They were formed in Crema a small city in the north of Italy in 2011 and Lacuna Coil hail from nearby Milan.

Marco Zelati, Lacuna Coil’s bass player, became the producer for their debut EP in 2015 and it all went from there.

“Basically we knew each other, we became great friends and then we met the other guys from the band,” Richard tells me.

“We met Andrea Ferro (lead singer), he was interested in us because he loves our music. He noticed that we put 100 per cent of our lives into our music.

“He said yeah it would be cool to bring you on tour because your music is great, it is produced by Marco we know each other, we are friends.”

Together they’ve been honing their unique brand of symphonic metal ready to be unleashed onto the UK scene.

It’s a heady mix of sounds with a furious dose of death metal mashed together with elements of thrash and stands in stark contrast to the more mainstream-friendly licks of Lacuna Coil.

I ask how people have been reacting to them.

“I think at the first shows, because we weren’t feeling that comfortable because we are playing death metal and those guys play melodic metal, we were a bit worried about the response of the people. They are here listening and then Nick comes out screaming,” says Richard with a grin.

It certainly is a scream. Or a death growl to be precise.

Later when I asked Nick how he ever managed to sing like that without ruining his vocal chords, he tells me that he does it directly from his diaphragm learning on YouTube from Lamb of God frontman Randy Blythe. 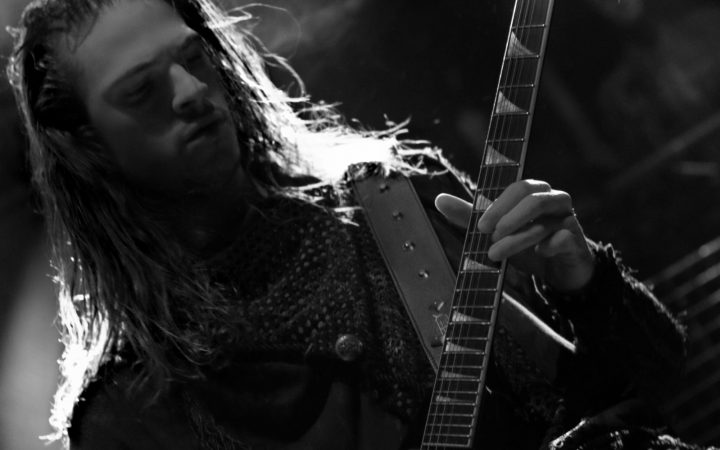 “But it was amazing because everyone coming for the merch at the end of the show, they all say we are a very big surprise, so that’s great,” adds Richard.

It’s the band’s first major tour experience, playing packed out venues, travelling in an enormous tour bus, which stands parked outside with a glowing yellow parking ticket on the windscreen.

“When we first went to the tour bus, at the beginning we were quite scared about the situation because we are basically sleeping in a bunk like dead people or mummies,” Richard says.

“We were kind of worried about, not tour life, but you know when you stay close to the same people for 40 days…”

The fights? The arguments? Boredom?

“Sometimes the people can’t know this life. But there is a lot of work to do every day. There are a lot of problems,” says Nick.

“We are learning to live this job everyday because we are working close to such great professionals. So, it’s great, it’s like going to school every day,” Richard chimes in.

G.O.D. are grateful for the experience and aren’t planning on wasting the opportunity. “We are happy and really lucky,” says Nick.

In addition to their EP and The Middle they are now busy promoting their latest album Great Olden Dynasty soon to be released in the new year.

“With the new album we are very close to finding our real sound. Even if the final sound of a band never comes I think that you have to get older and do so many albums to get your sound perfect,” says Richard.

“I think that it’s a very modern album with a very modern sound because our inspiration changed a bit. It represents our personality at the moment.”

The new single, Halls of Human Delights, is a rip-roaring display of heavy metal with the video showing Nick banging his fists on a table in some kind of disused monastery.

Throughout the interview, Richard talks animatedly about his drum set-up, his metalcore influences and his love of bands like Periphery, as well as enthusiastically explaining how the band collectively piece together their material. “We are nerds,” he says laughing.

Nick is more laid back and pragmatic. He answers questions concisely, nodding slowly. He’s presumably saving his energy for later on.

For those unacquainted with symphonic metal – think BBC proms meets Metallica and you’re getting close.

“If just one of your band doesn’t believe, kick him out because when he goes on tour and the first difficulties start to happen he’s gonna quit.”

As a roadie blunders in and out of the door, Nick tells me how Italian influences shape their music.

Imagery is a key motif in tracks from The Middle such as Word of God and Path to Salvation.

“We are not a Christian band but we are Italian and our country is really influenced by the bible and religion. For me the bible is the most epic book ever,” says Nick.

“We want to change something about the bible, we want to represent it in another way.”

Though nothing about them is satanic, they assure me, especially as some people can be quick to apply lazy stereotypes where metal is concerned.

One thing is for certain – this band has serious drive and are intent on conquering their field. 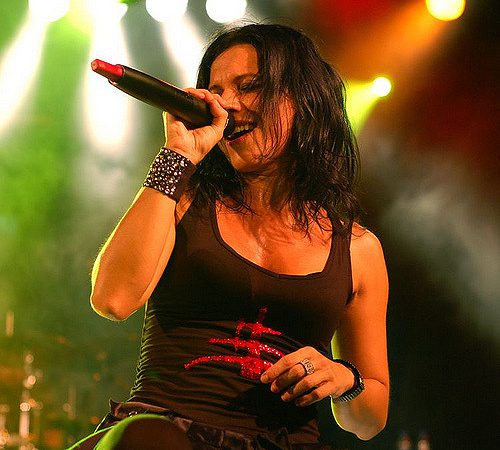 “You have to be surrounded by people who want the same life,” says Richard. “It’s not always easy to find other musicians who only want to be musicians in life.

“If you start a band with four people and every one of them wants to be a musician, then this is just the first step,” he continues.

“If just one of your band doesn’t believe that he can be a musician, just kick him out because when he goes on tour and the first difficulties start to happen he’s gonna quit.”

Before I leave I ask them if they’re able to tell me who the special guest will be on their new album.

They look at each other wondering whether to let slip. “It’s Cristina Scabbia,” they say.

The other lead vocalist in Lacuna Coil, Scabbia will be featuring on the single Salem.

As I’m lead outside via the musty smelling green room, I can hear Scabbia’s signature vocals in the background as she does a sound check.

The band have certainly landed an amazing guest feature and it will be interesting to see what her clean-cut vocals will add to the sound of G.O.D.

G.O.D. tear through their set and 30 minutes’ feels like 30 seconds as they play old favourite Red Snake as well as two new songs, including Halls of Human Delights, which garners the most rapturous reception.

Nick is a formidable frontman confidently owning the stage with a presence complimenting his shredding skills on guitar. 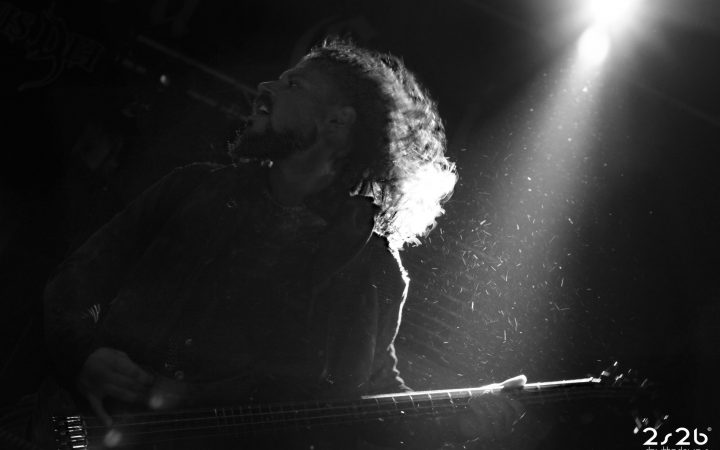 Tommy and Steven intertwine at various points standing side by side, headbanging in tandem and moving their fingers so quickly on their guitars it looks like tarantulas are crawling up the necks of their instruments.

The whole set is a whirlwind of metal that the early birds are only too happy to oblige to.

Nick constantly has his arms outstretched like some kind of biblical figure beckoning his disciples on as they headbang their way through the set.

G.O.D. bring the kind of energy most support bands fail to muster and by the end have set the night up nicely. 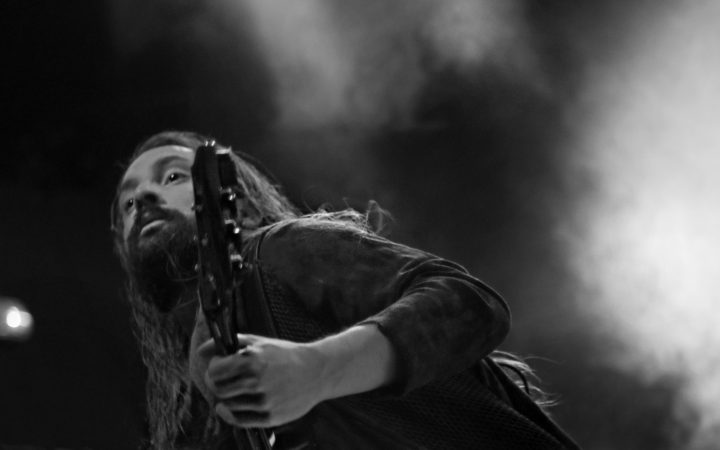 After they leave the stage to an enthusiastic reception Forever Still take to the stage but fail to fully connect in the way that G.O.D. managed to.

Lacuna Coil, clad in outfits designed to make them look like they’d all escaped from an asylum, are, as expected, the real deal and soar through their setlist with encore number Delirium hitting home hardest amongst fans.

After the set, I tie up with them backstage where they are chilling in the dressing room.

They are pleased with how the show’s gone and I finally meet Tommy and Steven as I take a few pictures.

Let’s hope these guys will get a leg up in the world of metal ahead of the album release – the apprentices definitely have the potential to be the masters and make their mark on the UK metal scene.

Before I go, they tell me they are already thinking about their next record.