The year 1985 saw the creation of the explosive Guerrilla Girls, an activist group formed of fierce unidentifiable females hidden by gorilla masks and all named after deceased female artists.

Filled with rage and their claws out ready to tear apart the prejudice, sexism, misconduct and perception of women in the art world, the group plastered their posters across different cities.

One of their infamous posters asked the provocative question: “Do women have to be naked to get into the Met Museum? Less than five per cent of the artists in the modern art sections are women, but 85 per cent of the nudes are female.”

It was obvious that they were not going to hold back anything; they were on a mission to expose the harsh truths about inequality in a hypocritical industry that always encourages freedom within an artist’s creative mind but is ironically locking up a lot of women from their creative side.

With their strong passions and goals to take over the world and stamp a permanent mark on the art map, the group are currently taking over Europe and educating any person that is willing to listen and join forces with them to protest and demand change.

In the UK, their latest exhibition can be found at the Whitechapel Gallery, until March 5, 2017, made up of more factual posters, videos and books.

They have everything detailing their purpose, their past agendas, their achievements and their goals. Unsurprisingly, the exhibition was packed with a lot of artists that had no problem sharing their opinions about the colourful display. 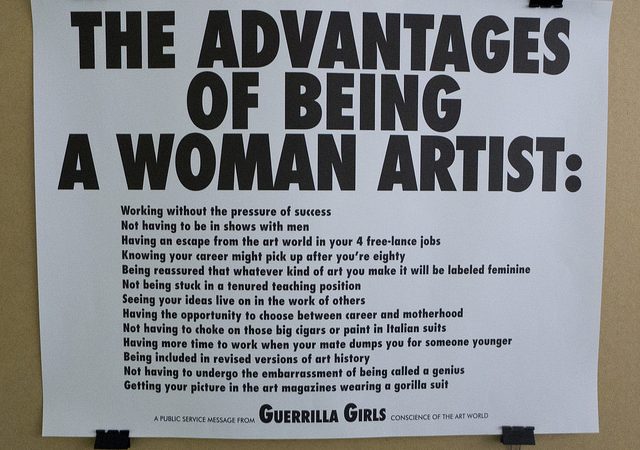 “I thought it was extremely informative, I have never seen this important issue addressed in such an amazing way before,” said oil painter Sophie Armstrong. “The photography industry is certainly male dominated.”

“I came from Australia to specifically see the exhibition after hearing about it and watching videos online,” she told us. “I find the Guerrilla Girls very inspiring as a woman artist myself. I feel like their movement is something that is needed and should carry on because some of their ideas are so powerful and have really changed the way I have thought and am thinking about my own work.”

“It has fuelled up my work ethic and inspired me to keep going as an artist because it’s very nice when you know you have people supporting and pushing for your success in the industry you love and are a part of,” said Ruby Choo, a photographer that specifically travelled from Australia to view the show.

“The exhibition is filled with facts, it is filled with their powerful protests and their outrageously creative posters but where is the mind blowing change,” she said

It has been over thirty years and the girls are still fighting for simple change such as increasing the percentage of women artists in museums from 10 to 15 per cent.

“It really upsets me how in this space of time a lot of people have been exposed to rejection and subjected to unfair treatment in the art world due to the visible prejudice,” said Baveeinthran Ravichandran, who is a fashion designer currently living in London.

“We need more people on board the Guerrilla ship if we want a sharp transitioning in the right direction and this exhibition has definitely made them gain a member,” she told Artefact. “I am on board.”

The whole exhibition is set out in one room, with every wall and the floor smothered in posters comprising of all the facts, images and percentage figures reflecting a clear pattern of inequality. 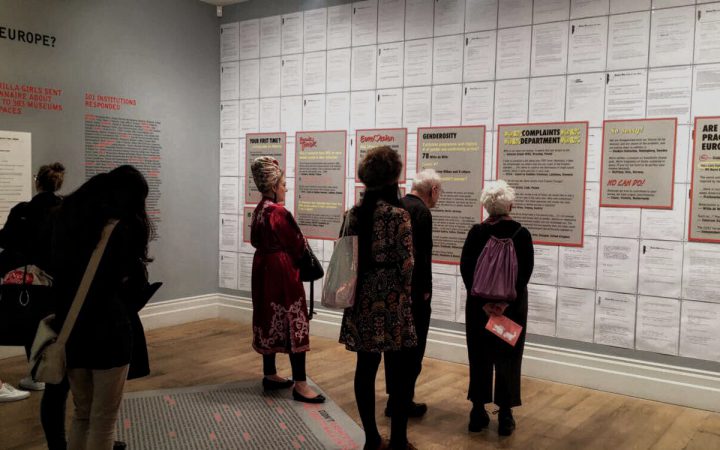 The lack of space may have been to make sure everyone that came to the exhibition didn’t miss a single fact or more worryingly it could have been because even after 20 years, the Guerrilla Girls still haven’t made that much of an impact to deserve more space to showcase their outrage and build support for their campaign.

Either way, the way it was arranged definitely sucked me into the cruel and degrading world of art and it implemented each and every quote into my mind.

The exhibition located in the Whitechapel Gallery is free for everyone to check out.

It is an exhibition we can highly recommend, as you will often find yourself wide-mouthed in shock as you read just how immense the discrimination in the art world is.

This movement is one that needs a much bigger and stronger force for the voices of women and all other minorities in the industry to be finally heard and get changes permanently implemented into the system.

Guerilla Girls: Is it even worse in Europe? is free and open six days per week, Tuesday to Sunday, 11am to 6pm (9pm on Thursdays) at The Whitechapel Gallery 77-82 Whitechapel High St, London, E1 7QX.