Just who is Agar Agar?

The new French duo who goes by the name of Agar Agar met at the Beaux Arts school of Cergy-Pontoise in the suburbs of Paris.

Or, as the story goes, they met at catechism, tried a few jam sessions on Te Deum and decided to give music a go. Amen.

Their first EP Cardan came out in September and is something halfway between pop and techno – an explosion of 80s hard synth bass lines brought by Armand, topped by Clara’s deep, dark, yet sensual voice, embodying the duo’s strong personality and offbeat sense of humour.

When we asked what their influences were, particularly regarding their artistic background, the duo explained: “Clara comes from a family of apes so her influence is pretty varied, like trees, bananas, dried fruit, and Armand quite likes paintings but not their frames.”

The EP opens with the mystical and haunting seven-minute long I’m The Guy on which Clara pleads and longs “Give me goosebumps, I see you in the dark and I’m on fire”, and grows into a more fast-paced, raw and almost angry-sounding sequence, in particular on Cuidado, Peligro, Eclipse and on Symbiose.

Prettiest Virgin, the second track of the EP, was released earlier this year and is the story of, well, a virgin at a party pining for a boy named Dan.

Artefact asked the duo to explain the story behind the making of this tune: “A bass line, teen movies and a few drinks.”

The 80s-infused music video for the track is indeed reminiscent of the flicks we used to watch in secret at the tender age of 12 forming our sexual awakening, but also of early teenage parties where, like the protagonist, we found ourselves “craving” that cute Dan we couldn’t muster the courage to approach.

The duo’s refusal to use their native French throughout the EP is due to the fact that Clara has lived in the US before and always writes music in Shakespeare’s tongue.

“We tried French but we’d rather avoid it, it didn’t work well.” 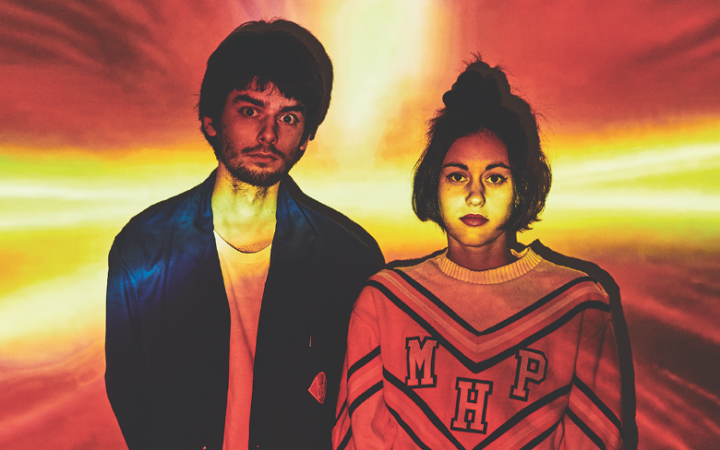 A few words of Spanish spoken in a thick English accent can be heard on Cuidado, Peligro, Eclipse.

When asked why, the duo says that “Spanish is a language that has damn cojones”. Fair enough.

Lastly, we had to ask why they chose to name their project after an ooey gooey substance, sometimes used to make jelly.

“Armand breeds ants. He feeds them with agar-agar and grenadine syrup and then he pets them.”

The pair never ceases to surprise us, so we are, without a doubt, going to see what they have up their sleeves for their first UK show in London very soon.

Agar Agar are playing at Waiting Room in London on December 8. Get your tickets for £7 with no fees from Dice.

By LukHA
3 Mins read
When French secondary school teacher, Samual Paty, was murdered at the hands of a radical terrorist, France braced itself for what would happen next.
Music

By Alice Stoner
4 Mins read
Fittingly called ‘Punkband’, the band give some insight into how they are currently beginning to navigate the music industry