Finland, mostly known for its education system and unpronounceable language is a wolf in a sheep’s clothing when it comes to human rights.

Finland has been enthusiastically branding itself as a haven of equality, a Nordic welfare state in which people of all genders are equal.

Even primary schools used to teach that until the mid-2000s, Finland has five million habitants and equality between everyone.

But this does not reflect the reality.

Not only are there major differences in the treatment of men and women in the wider society, but this also intersects with another form of discrimination.

Transgender people, the people whose gender identity doesn’t match the gender they were assigned with at birth, are still facing inequality. 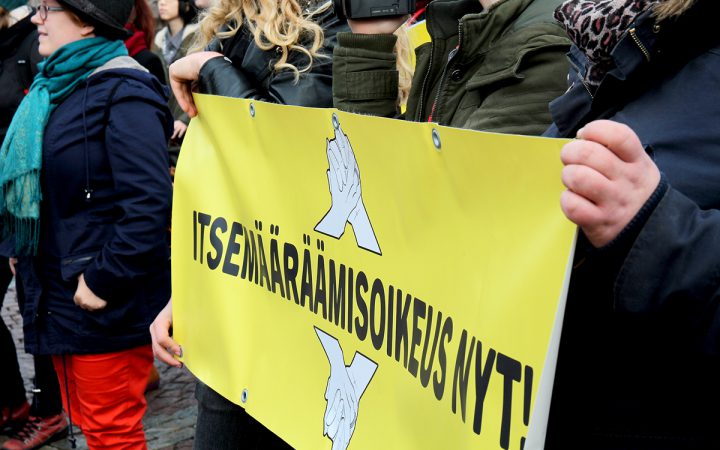 In November 2016 Seta and Trasek, two Finnish non-governmental organisations (NGOs) that work to improve the conditions for the Lesbian, Gay, Bisexual, Trans and Queer (LGBTQ) community in the country, wrote a report to the United Nations (UN) committee against torture.

The document details the human rights violations that transgender people in Finland face on a daily basis.

“I feel that gender minorities have been entirely invisible in Finland until recent years,” says Aaro Salokorpi, a 21-year-old trans man.

“The forced sterilisation required by law is a serious matter that has just now been brought into the public and that is constantly looked past because although the people might not have anything against transgender people we also aren’t cared about.”

In Finland transgender people can obtain legal recognition only if they are 18+, diagnosed with a mental disorder and agree to be sterilised, says Amnesty’s annual report 2015/2016.

‘Legal gender recognition’ means the change of gender in official documents to match the person’s gender identity. Finland has agreed to follow international human rights policies that require the legal recognition of gender to be a fast, open and smooth process that respects the person’s privacy and dignity.

Sweden, Spain, Portugal and the Netherlands have given up on the forced sterilisation while Argentina, Norway and the Netherlands don’t require strict age restriction of 18 years, both policies that the Finnish officials insist that they to stick to.

The British system requires neither. 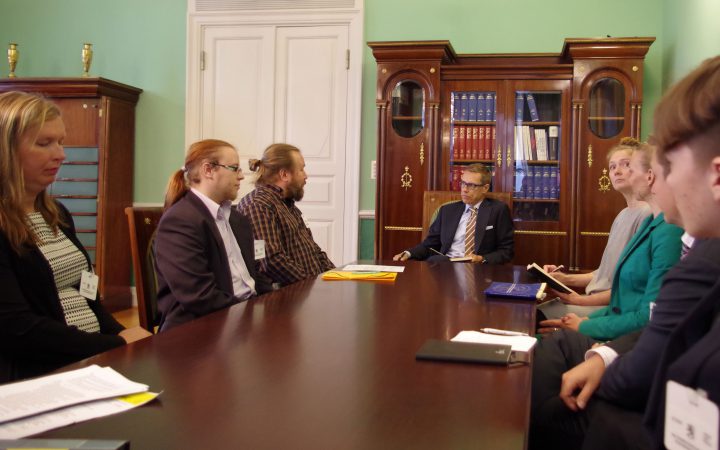 In 2014 Amnesty’s activists presented their plea for updating the trans act to Finland’s PM at the time, Alexander Stubb. [Amnesty Finland]

In addition, the name legislation in Finland generally requires a diagnosis as well in order to allow individuals to access the name change to a name that is traditionally recognised as referring to a person of another gender: according to the law, women can’t be named men’s names and vice versa.

The legislation does not recognise non-binary genders whatsoever.

In the UK, it’s possible to declare your gender in most paperwork such as job applications, the Finnish system may require you to also declare your social security ID, which is also gender-dependant.

It’s possible to directly tell someone’s assigned gender only looking at the number, and many systems require a matching gender marker with the social security ID.

To obtain the legal documentation about the gender reassignment, including the social security number, trans people must go through one of the two gender identity clinics in Finland, either Helsinki or Tampere. 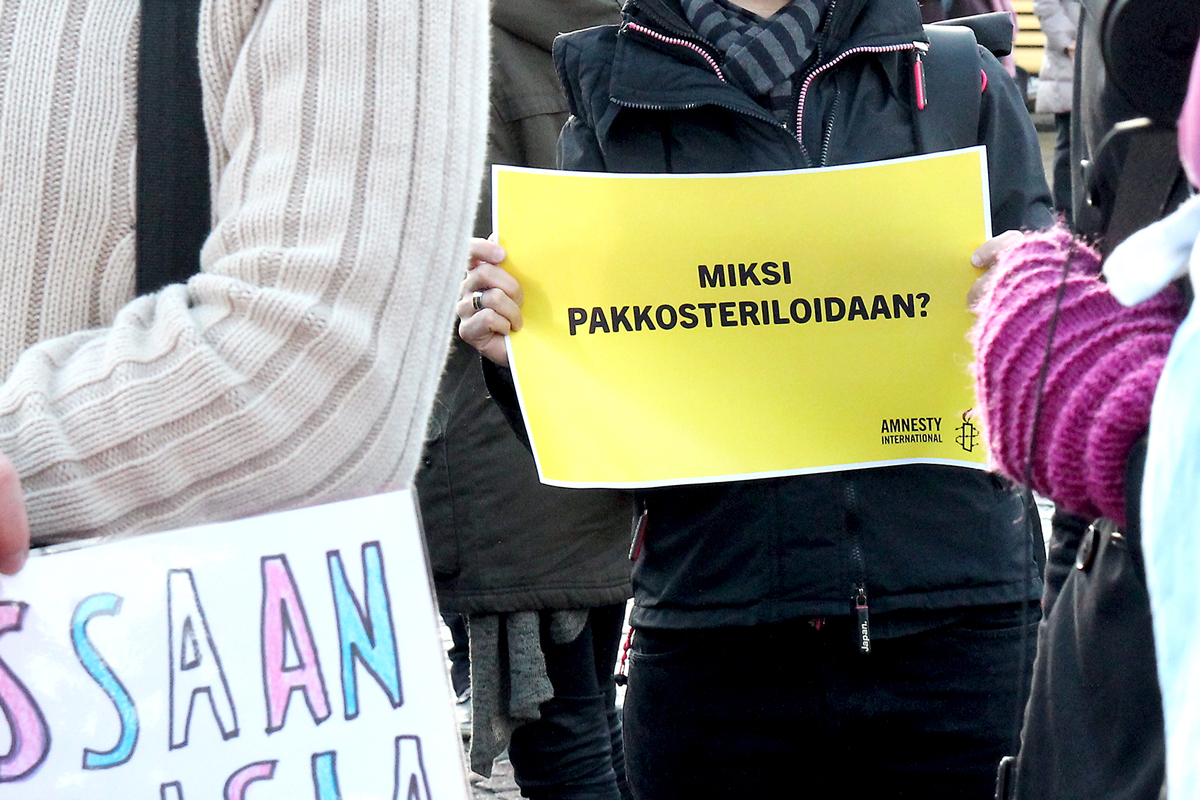 Trans people are the only group sterilisation is forced upon in Finland. The sign says: “Why forced sterilisation?” [Amnesty Finland]

The current legislation in Finland requires trans people to go through a medical transition of hormone therapy, possible surgery and ultimately sterilisation.

Transgender people are the only group in Finland who are forced to undergo sterilisation in order to live in their identity.

Forced upon any other part of the population, this would be illegal, and would have been since the 1970s when the legislation allowing the sterilisation of people with mental illnesses was overturned.

In its 2014 report titled The State Decides Who I Am, Amnesty International writes that in practice the sterilisation requirement is achieved using hormone treatment, according to health professionals in Tampere and Helsinki.

But LGBTQ NGOs and trans people themselves oppose the law: “The forced sterilisation clause is repressive and cruel and should be changed immediately,” says Salokorpi.

Young trans people in Finland face the decision of whether they want to live their lives expressing their gender identity or to have children. 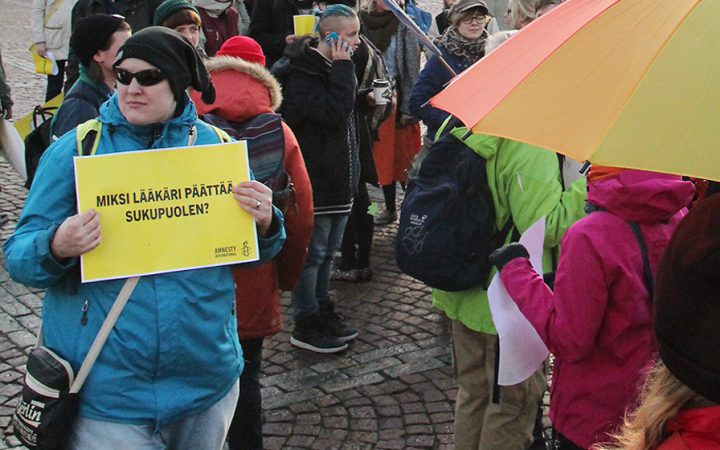 “Why do doctors decide our genders?” asks a protester’s sign. [Amnesty Finland]

At the moment only two clinics can issue the required documents for the legislation of one’s gender.

The diagnosis process can be lengthy and require a lot of travelling back and forth. In order to get your hormone treatment subsidised by the state, you must first have your legal gender recognition document.

“I’ve heard all kinds of horror stories that people would’ve been turned away based on certain appearance that didn’t match their gender in the staff’s opinion,” says Ari Perälä, a 19-year-old trans man.

“If someone’s had, for example, mental health problems and medication they could be turned away, which is why I’ve been quite unsure whether I should start my antidepressants again,” says Perälä. “But the person I’m seeing from the Autism Foundation said I could go back on them because so many trans people need the medication to cope.”

Aaro Salokorpi, who’s 21, has had slightly better experiences: “Individual staff members at Tampere University Hospital have been understanding and professional so far, but official forms I’ve had to fill in have been ridiculous. ‘Do you act like the opposite sex in formal situations?’, ‘Do you feel you’re more of a hermaphrodite?’ And this was in 2016. It’d make me laugh if it didn’t make me cry.”

“The authorities at the gender identity clinic have been a lot better than I expected so far,” he says regardless.

“When I met my doctor for the first time I almost started to cry when they started discussing my fear about the gender identity clinic visit being some sort of a game of hurdles and explained that the point of the appointments isn’t to assess ‘how trans’ someone is, but whether the patient’s state of mind is clear enough to be able to be sure that the operations are necessary.”

“The system has its faults, of course, but it was reassuring to hear from a professional that no one expects you to come to the clinic as a straight guy who looks like a lumberjack in order to be taken seriously,” Salokorpi told us. 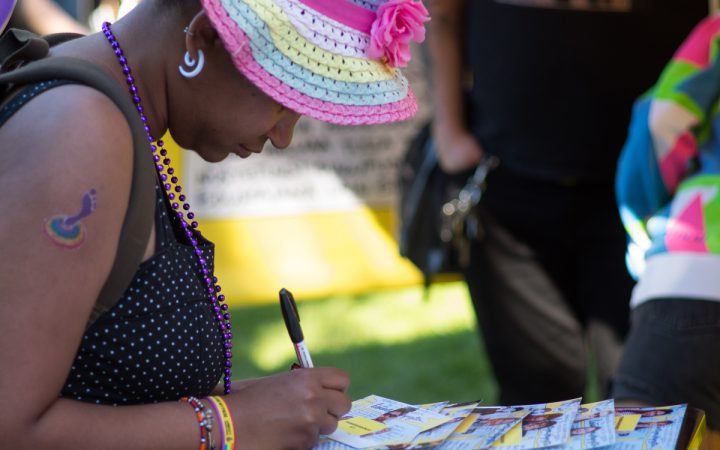 Trasek and Seta wrote that the Finnish National Institute for Health and Welfare classifies trans identities as mental disorders.

The NGO’s say that this is “contrary to the standpoint of World Professional Association for Transgender Health Care and several human rights bodies such as the Council of Europe’s Commissioner for Human Rights and Parliamentary Assembly.”

“I don’t think that I would dare to be openly trans in an ordinary office job. But I don’t feel there’s a reason for fear with individual people. People know about transgender topics more and more and they’re getting more understanding and don’t really cause upheaval about it,” says Salokorpi.

“Although I believe that might be because Finnish people just don’t say anything conflict inducing to anyone’s face,” he adds. “In my everyday life the most prominent problem would be that we are like some kind of zoo animal for most cis people: awfully fascinating but not meaningful.”

“Every time I introduce myself as Aaro and not Raffe to a new person, their first reaction is always dumbfounded and then a knowledgeable ‘Ah!’ and a look that explains exactly what’s going on in their heads: ‘So this is a tranny! How exciting’. 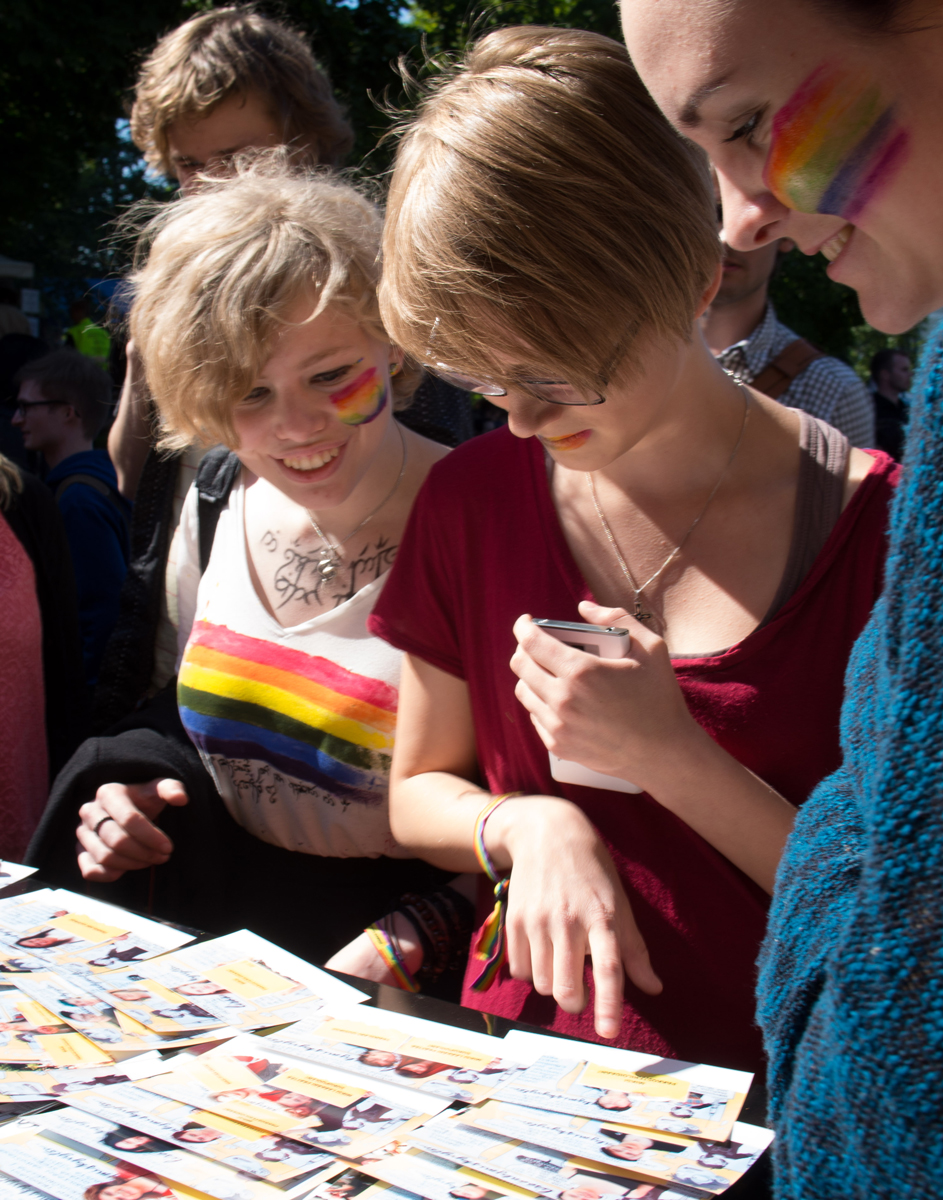 “I don’t think that these people would think it as a negative thing but they’re still alienating. I’m always ‘the other’ because transgenderism hasn’t been normalised. Being trans has been a hidden thing in the mass media, or the only characteristic that defines the person. Albeit luckily we’re starting to see exceptions.”

“However, I must add that sadly and obviously trans men are in a more privileged position than trans women, so I can only speak for myself on this.”

“I feel that in the capital area it’s safer but in the time I’ve lived in Finland I’ve only lived in Helsinki,” says Perälä. “Now that I’ve been thinking what to do after upper secondary school I would’ve felt nervous moving somewhere outside Helsinki because you get afraid if the prejudices and such are different there.”

Being outed, that is being revealed to be of a trans background, can be dangerous.

While discrimination based on gender in places of work and education is technically illegal, there is no specifying clause about transgender people’s rights when it comes to bullying. It falls under ‘other things related to the person,’ which can be interpreted accordingly.

Finnish activists are now lobbying for a better future for the transgender population of the country. Their goals are amending the trans legislation: ‘Trans act now!’ goes their slogan.

They want to remove the medical gatekeeping policies and give the people the freedom to declare their own gender, as is the case in Ireland and Norway, for example.

They also want to remove the forced sterilisation of trans people which is currently required for anyone applying for their gender recognition documents.

In November Amnesty and the NGO’s Seta and Trasek started a campaign titled ‘Belongs to Everyone,’ referring to the right for everyone to determine their own gender.