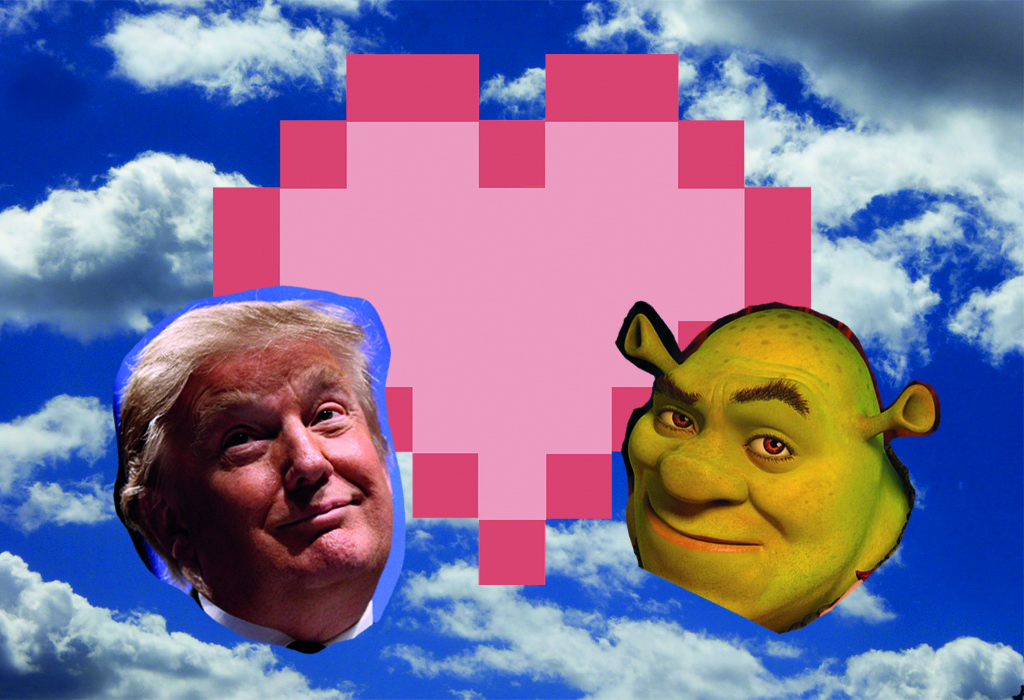 There isn’t much that Donald Trump could do to surprise anyone anymore: from claiming that we need global warming so that New York can stop being so cold and snowy in winter, to going on Twitter and calling a woman so unattractive that he can “fully understand why her former husband left her for a man”.

But in a dark corner of the internet, where imaginations are allowed to run wild, Trump is getting up to a lot more than we thought.

Oh dear. The first thing Shrek noticed about the man’s face was the eyes. He looked into those piercing, squinty, blue pools and almost felt like he was falling right into them.
“Can I help you?” the man asked. Shrek noticed the man’s mouth that looked like an ass crack opening as his wheezy voice came out of it.
Shrek had never felt this way before, not even about Fiona. He was so lost in the man’s bright orange skin and corn-silk comb over that he wasn’t able to respond.

It’s Donald Trump fan fiction. Believe it or not, it exists.

Published on Archive of Our Own, the story It’s a Cold and It’s a Broken Shronald explores a Trump and Shrek romance.

They end up getting married, despite Trump building a wall, “not to keep the Mexicans out [but] around his heart, to keep anyone from getting there and breaking it”.

Fan fiction began with fans of novels or films creating their own, or re-creating existing stories about their favourite fictional characters.

It also became the norm to write using celebrities, often One Direction or Justin Bieber. Their fans imagine meeting them, marrying them and more often than not ending up having movie-like sex with them, most likely littered with words like “quivering”.

Free websites like FanFiction and Wattpad, which allow amateur authors to post their unpublished and arguably unpublishable stories, are filled with fan fiction and Donald Trump hasn’t escaped these writers.

Trump fan fiction is not actually as much of a rarity as you might think.

If you search Amazon, you’ll find more results for “Trump Erotica” than you would have ever hoped, but you will inevitably spend several hours reading each and every search result that comes up.

They cover more angles than you could ask for; it’s kind of like a car crash that you can’t look away from.

Hilary Clinton, Vladimir Putin, Ted Cruz, Pepe the Frog, Scooby Doo, Gordon Ramsay, John Cena, Sonic the Hedgehog, Barack Obama and of course Shrek are just some of those who make appearances alongside Trump in these creations.

Some are even in keeping with the theme of the election, such as Prez High, which sees the electoral candidates as high school students battling it out to become the school’s president.

Whether they love or hate Trump, are apathetic or maybe even have a sexual attraction to him, there are people writing about it.

But why? Why are they not just writing Facebook statuses and angrily tweeting their feelings like everyone else?

Most people I asked refused to discuss their fixation with Trump in their writing, having no interest in sharing their motivation behind writing this kind of literature.

However, Georgia, a student from England, posted her Trump fan fiction on Tumblr and told Artefact how it came about.

She usually just reads fan fiction but Georgia decided to try her hand at it, using Trump as the subject.

She changes his name to Ronald Jump, in case Trump was to be reading his own fan fiction, and she was to run into any legal issues.

He was done with sitting alone in his house, secretly wishing that his daughter wasn’t his offspring so that he could date her.
(Extract from Georgia’s untitled fan fiction)

“It makes sense to write about him because most of the fanfics that you read about him are just so out there but you can still perfectly imagine him saying or doing the things that are written,” she told us.

“…the person who Trump loves most in the world is himself”

She went on to say that she is not a fan of Trump, and explained her motivation behind using him as the subject despite this: “It was something to sort of undermine him. He comes across like such an idiot by himself but I thought it was a good way of showing people that he can’t be taken seriously.”

Artefact asked Georgia why she preferred this method over a classic Facebook status or tweet. “Being young, you never know how people will interpret what you’re trying to say. With fanfiction, it’s easier for people to understand what you’re saying and not be so judgmental about it”, she explained.

“You can be funny about your opinion but you can still get the point across. With a status or tweet, you have to be very blunt because you only have a certain amount of characters to do it in.”

However, C. Hoxworth, a software engineer from Atlanta, USA, created a blog filled with fan fiction throughout the campaign but with a different motivation.

Unlike most other Trump fan fiction, it was not mocking Trump, instead helping others to see him in a different light.

It follows the presidential candidates and their thoughts and feelings during the process.

“Trump was an intriguing personality to write about, but the election as a whole was a fantastic story with a broad array of characters”, he told Artefact about his choice of using the presidential candidates for fan fiction.

“After all was said and done, when you take away the public persona, what is left of the human? How does the private person cope with the outcome?”

“The platform was better, but also different. It achieved something greater,” Hoxworth explained about choosing fan fiction as his medium.

“When someone tweets or makes a Facebook status about this type of subject, it is seen as incendiary, and normally incites arguments or debate from both sides of America’s political spectrum,” he said.

“Writing this kind of fiction anonymously sort of took the politics out of the subject and approached it from a different angle. A lot of people from around the world agreed with how I’ve characterized these politicians.”

Hoxworth went on to explain that several people have read his fan fiction and sent him messages about how they are able to see Trump in a different light, even if they do not support him.

“Rather than arguing policy points or the rhetoric that was heavily emphasized by the media, this sort of storytelling gave a platform for Clinton supporters to see the hardworking character that Trump’s supporters believed in, and it allowed Trump supporters to see a sympathetic, gentler side of Hillary Clinton that her public persona never revealed.”

Despite writing as a profession, Toby Halligan, an Australian comedian, found that his audience didn’t take too well to his fan fiction, The Donald Meets His Match, the story of Donald Trump and his pleasure bot made in his likeness:

Before him stood a custom-made pleasure robot that he’d secretly constructed in Germany. And Donald Trump’s robot was a perfect replica of Donald Trump.
“You handsome bastard” said Trump as he approached the pleasure bot and kissed it roughly on the lips and the Trumpinator as he called it, kissed him just as roughly back.
(Extract from The Donald Meets His Match)

He explained why it didn’t work to Artefact: “It was just too weird. It really threw the audience off and changed the vibe of the show so I had to stop doing it.”

Halligan’s fan fiction did not come from a place of love or hate for Trump. “It came from an underlying presumption: that the person who Trump loves most in the world is himself and it grew from there,” he told us.

His motivation behind writing a story in which Trump performs oral sex on himself did not just come from his love of comedy.

Much like Georgia and C. Hoxworth, he wanted to make a statement that could not really be made any other way: “[I wanted to] take something that had been covered by a lot of people and say something original”, he said.

“There also didn’t seem to be conventional satire to write about him. He’s so clownish he’s already a satire of ordinary politicians.”

He went on to tell Artefact that “he was a piss-take of the establishment and he’d breach social norms in the same way that a lot of comedians do. Lots of comedians say the unsayable and then walk it back through other material that demonstrates their humanity or adjusts how the audience sees them and Trump does that all the time.”

As the soon-to-be president, people are going to be writing and talking about him more and more for a long while to come.

However, if you’re tired of only reading news articles about him, reading fan fiction can give you that same sense of disbelief, but potentially with a side order of erotica.