Hong Kong: Pearl of the Orient

Though the sound of a 12-hour flight over Russia, Africa and India and a timezone change of eight hours ahead might sound a little daunting, a seven-day trip to Hong Kong, for my 21st birthday was something I was never going to turn down.

No matter how long the route.

Starting our journey from London’s Heathrow Airport, my family and I boarded the Boeing 787 Dreamliner a few days before my birthday for our direct flight.

I had never flown such a distance and spent so long a time suspended at 40,000 feet, but my anxieties of spending 12 hours squashed into a small seat – next to people with questionable hygiene – was soon soothed when I spotted our Premium Economy seats.

Relieved by its spacious leather, accompanying TV screen and glass of Prosecco – complimentary to all Premium Economy passengers on board Virgin Atlantic flights – I still could not quite believe I was on my way to China.

While my family and I had holidayed extensively around Europe – most recently on a return trip to Saint-Tropez in the South of France – the Pearl of The Orient, otherwise known as Hong Kong, would offer us a different experience.

With a skyscraper-studded skyline, world-renowned shopping and tourist destinations, Hong Kong has been praised by travel guide Lonely Planet for its stunning views and traditional architecture.

Having spent one week in the vibrant area of Causeway Bay, staying at the five-star Park Lane Hong Kong Hotel across from Victoria Park – visitors to the island would be advised to escape the walls of their hotel room and explore what is going on outside.

Regaining its sovereignty from the British in July 1997, the former colony on the Southeast coast of China is a thriving urban area with a population of approximately 7.4 million, making Hong Kong the fourth most densely populated city in the world, according to World Atlas.

With spectacular views and tourist attractions, attempting to see all that Hong Kong has to offer in two or three days is very ambiguous yet unrealistic, especially if considering time, distance or even cost.

Much like London, Hong Kong is a not only a social hub to tourists visiting but also a business hub to men and women travelling to the destination’s financial market.

An estimated 59,308 international tourists have visited Hong Kong in 2016, according to GovHK – English is the official spoken language of Hong Kong alongside other Chinese dialects with 89.5% of the population speaking Cantonese and 1.38% Putonghua. 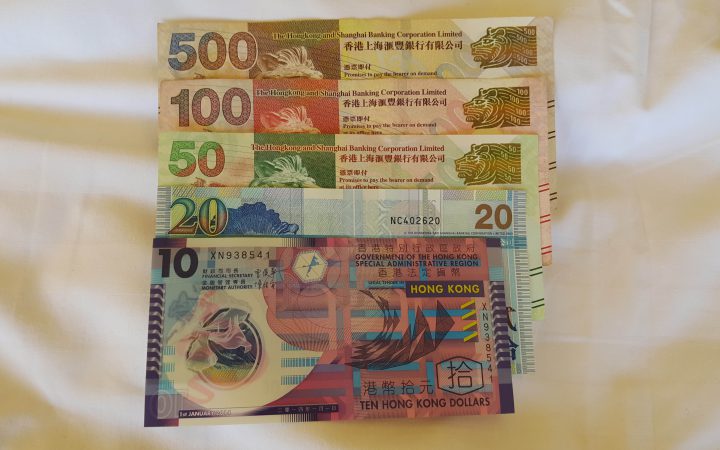 The legal tender in Hong Kong is the Hong Kong dollar (HK$). Though the exchange rate is considerably poor for those exchanging British Pounds (GBP) to HK$ – the three main banks operating in China are: HSBC, Standard Chartered and Bank of China.

From the subway, to buses and walking, transport is incredibly easy to access in the heart of Hong Kong, however taxis are one of the most reliable forms of transport used by tourists who lack knowledge of their surrounding areas.

In Hong Kong, there are three types of taxis that operate around the island and are the most convenient way of travelling to the following areas and locations: 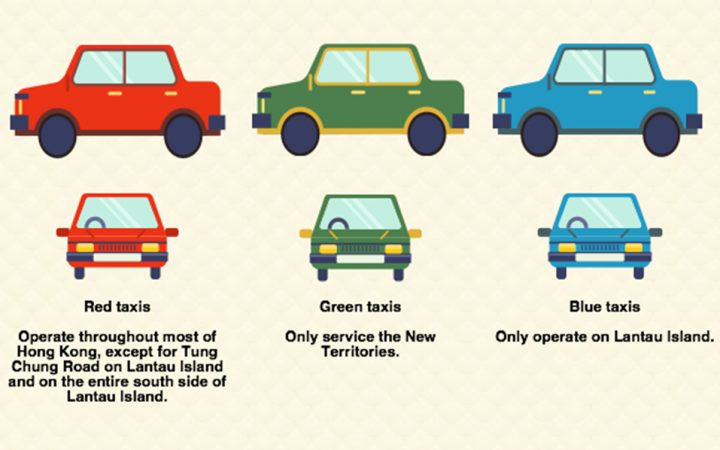 Travel to location: Red taxi then walking or the Peak tram, which is highly recommended.

Known as “The Peak”, Victoria Peak is the highest vantage point on the western half of Hong Kong Island.

Measuring 552 meters above sea level, a spectacular 360 degree view of towering skyscrapers, Victoria Harbour and Lamma Island can be seen once you have reached the top.

The most straightforward route to the top requires a five-minute ride up the steep mountain on the Peak tram – which has operated since 1888 but walking is also an option.

With tickets available to purchase from the Garden Road Peak Tram Lower Terminus from HK$75 (£7.60) for an adult single, tourists can expect to see views for miles that proved to be just as beautiful in the day as at night.

From queue to view you can expect to wait around one hour.

Return trips down the mountain are also available. 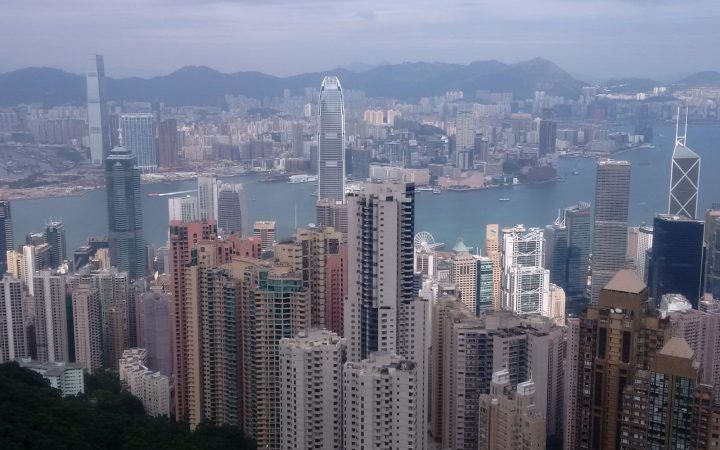 Time Square is a landmark destination for Hong Kong and an ideal stage for cultural and artistic activities.

A one-minute walk from my hotel but a short and inexpensive taxi ride if a little further from Causeway Bay, Time Square Hong Kong is a world class “mega-mall”.

With over 150 thousand shoppers passing through its doors each day, the mega mall offers a touch of designer for lovers of brands such as: Burberry, Miu Miu, Balenciaga and Gucci.

It is also home to a spacious cinema and multiple restaurants – tourists, be warned.

During busier times such as Christmas and sale periods, movement within Time Square can be extremely restrictive with barriers outside of shops monitoring the amount of people allowed to enter at certain times.

Located at The Hennessy in Wan Chai, Hong Kong, Wooloomooloo Steakhouse is a restaurant like no other.

Offering panoramic views of the city from the 31st floor, it is a restaurant for those who enjoy great wine, steak and nightlife, with a rooftop bar on the 32nd floor if you enjoy heights.

The dark yet sophisticated restaurant with floor-to-ceiling windows, which give a stunning view of the city below, offers traditional Chinese food as well as a twist on several western favourites.

With dazzling surroundings, the a-la-carte menu, including a selection of oysters, steak and smoked breast of duck, starts from HK$195 (£20) per head.

Wooloomooloo Steakhouse is a must for those looking to swap from the fast pace of Hong Kong below for a slower and more spectacular view from above. 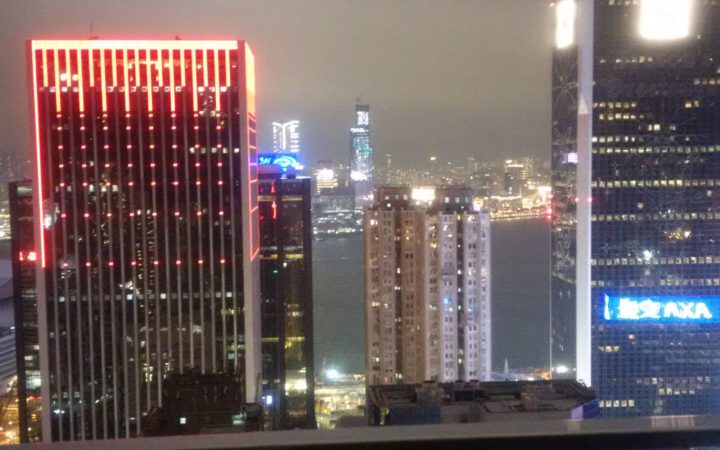 By now, it may be obvious that Hong Kong has a thing for heights and though you may not like them, it is often the only way of appreciating its beautiful landscape.

Ngong Ping 360 is a unique and exciting experience for those wishing to take in the landscape of Hong Kong all at once.

A popular tourist attraction for those visiting the Pearl, the tram offers a breathtaking view and is one of the most popular routes of reaching the Tian Tan Budda, the world’s largest bronze statue.

Travel to location: Ngong Ping 360, bus or Red taxi to the top of the mountain.

From the Ngong Ping 360, reaching the Tian Tan Budda is relatively straight-forward.

Completed in 1993 and seated at an outstanding 34 metres high, the Tian Tan Budda is popularly known around the world as the “Big Budda”.

This majestic bronze statue draws in not only tourists but also pilgrims from all over the world.

Surrounded by picturesque mountains and situated near the Po Lin Monastery Buddhist temple, the walk from the cable car to the Tian Tan Budda is around 30 minutes with 268 steps to climb before reaching the world’s largest bronze statue.

The Tian Tan Budda is free to view, however costs will apply if entering the temple beneath.

Travel to location: Red taxi and blue taxi, if continuing to travel around Lantau Island.

Said to be one of the happiest places on Earth, Hong Kong Disneyland is no exception.

Smaller than its sister sites in America and Paris, Hong Kong Disney is the first theme park located inside the Hong Kong Disneyland Resort and features the castle of the Sleeping Beauty.

Visitors can expect to see all their favourite Disney characters including Mickey and Minnie Mouse as well as Disney’s favourite chipmunks, Chip ‘n’ Dale.

While the site may be small, the attractions inside including Mystic Manor and the UFO zone offer a fun and relaxing atmosphere with many food stalls and shops available to purchase Hong Kong Disney merchandise. 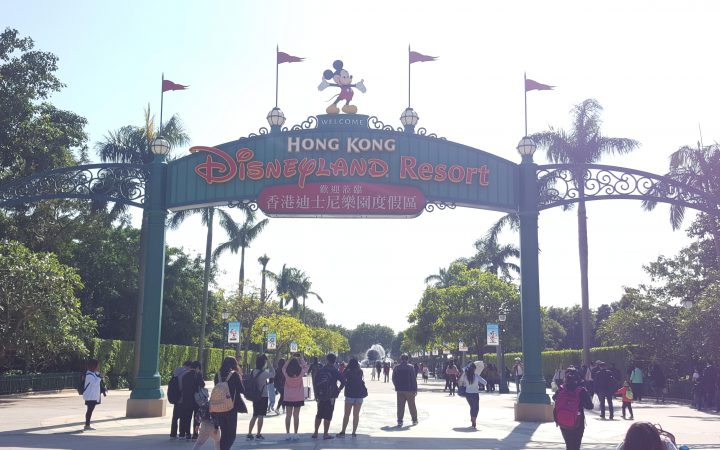 The entrance to Hong Kong Disneyland

Named after Queen Victoria of the United Kingdom, Victoria Park is a public park located in Causeway Bay.

A hotspot for morning tai chi sessions or sports enthusiasts who enjoy swimming and basketball, Victoria Park can be found in the middle of the Causeway Bay Skyline.

With views of Victoria Harbour seen in the distance, the park in the centre of Hong Kong island opened in October 1957.

As the largest park in Hong Kong Island, the site offers visitors 227,238 square yards to run, jump and play whilst also offering a space to relax out of the heat of the sun.

Free to use and flexible for all those visiting – with designated running areas for those jogging and outdoor gyms – the park is a place to visit when wanting to relax or partake in outdoor activities.

No matter your time or budget, Hong Kong is a destination you must visit if not for its traditional history than its beautiful skylines.

Though I conquered the Pearl of the Orient in seven days, there is so much more to explore if you ever get the opportunity to visit.

All images by Nike Akintokun