It is an irony of Jewish life in Europe that it took the Holocaust to give Anti-semitism a bad name.

For many centuries, across Europe, hatred for Jews was socially acceptable as they were blamed for deicide (causing the death of Jesus Christ), for being extortionate money lenders and even for spreading the Black Death across the continent.

The murder in 2015 of a Jewish man in Denmark in front of a Synagogue, the terroristic attack at a Kosher supermarket after the Charlie Hebdo attacks in Paris, the murder of some Jewish children and their teacher in Toulouse (France) made everyone realise that we are seeing a new anti-semitism with the resurgence of old beliefs combined with a hatred for the state of Israel.

In Sweden, the Mayor of Malmo, where most Swedish Jews live, blamed Jewish people themselves for assaults on them and the firebombing of synagogues, while France has experienced anti-semitic acts since the end of the Second World War.

In 2006, a young French Jew, Ilan Halimi, was kidnapped and tortured for three weeks only because he was Jewish – he died of his injuries, murdered by French Muslims coming from North Africa.

Jews comprise only one per cent of the French population, yet half of racist attacks in France are against Jews.

Even across the English Channel there have been many cases of anti-semitism such as the assault of eight Jewish students at King’s College London in 2015 or the physical and verbal attacks on student members of “Friends of Israel” at UCL in October 2016. 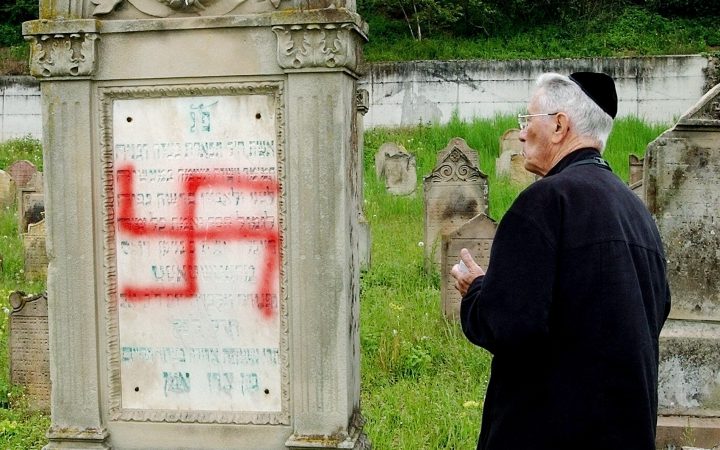 Attacks on the Jewish community take may forms [opb.org]

Christian Europe has a millennia long history of oppressing, persecuting and murdering Jews, whether in the name of supersessionist religion, secular enlightenment, nationalism or a racist ideology.

The culmination of this was the Holocaust in which the whole Jewish population of Europe was exterminated causing the death of six million Jews in only five years, between 1940 and 1945.

Synagogues and cemeteries vandalized, students assaulted, people mocked on the streets: that is what is happening again in Europe right now.

With the rise of radical politicians such as Nigel Farage, Marie Le Pen, Donald Trump or Matteo Salvini, the West is witnessing the uprising of anti-semitism and islamophobia, racist ideologies that earlier generations sacrificed their lives in order to stop these forms of irrational hatred.

According to an Israeli law called “Aliyah”, the Right to Return, anyone who is Jewish or has Jewish ancestry is eligible to emigrate to the Holy Land and settle there and become an Israeli citizen.

After these all attacks, statistics show that immigration to Israel hit a 12-year high in 2015, with more than 30,000 new immigrants leaving Europe to settle in the Jewish state accordi to the Jewish Agency.

These numbers for 2016 represent an overall 10 per cent increase of new olim (Hebrew for immigrants) over 2014’s numbers.

The countries with the highest requests to make aliyah between 2012 and 2016 are France, Ukraine, Russia, Great Britain and Belgium, where Jews scared of what could happen to them and their families finally are reacting and leaving Europe to a new land, or the so-called “Promised Land”, leaving entire towns, villages, synagogues and schools empty.

[pullquote align=”right”]“I feel scared, therefore, I decided to sell everything I owned to build a new life here in Israel”
Rosie Geller[/pullquote]After more than 2,500 years of Jewish life all around the continent, due to political radicalism and economic instability, Europe is witnessing the loss of this community who contributed to the development of Western culture and it is almost beyond our capacity how Europe would have fared, if they (the jews) had never emerged, certainly the world without the jews would have been a radically different place.

According to Paul Johnson, author of History of the Jews and History of Christianity: “To them we owe the idea of equality before the law, sanctity of life, dignity of the human person, social responsibility, peace as an idea and many other items which constitute the basic furniture of the human mind, without it, Europe might have been a much emptier place.”

Rosie Geller, is 27 and from North London, but she recently who made Aliyah by herself and is now living in Tel Aviv, attending Ulpan courses, a language institute where they teach Hebrew to new immigrants for the first five months in Israel.

“I got to a point in my life where I felt like I didn’t want to raise my future children in England where I feel scared, therefore, I decided to sell everything I owned to build a new life here in Israel, where I can live a real Jewish life, in and outdoors, without feeling scared of being insulted on the streets,” Rosie said.

Rosie believes that society will never get rid of Antisemitism because humans are and will always be scared of those members of the society, the so-called minorities, who don’t fully represent, behaves or act like the majority does.

“That is why Israel has to survive and thrive, because if us Jews become assimilated in one single state, we won’t be seen by the rest of the world anymore as outsiders in exile moving from one country to another,” she stated.

Both the United Nations and the European Union have yet openly shared their opinion and solution to this drastic exodus of talent.

As a result, Western governments have to realise that it is not only the muslim community that is suffering as a result of the uprise of ultra-right wing extremists, but also Jewish communities, and that they are already beginning to escape to protect their lives from fanaticism and danger.

By Summer Shannon
3 Mins read
After the New York Post published an article stating that Heroin Chic was ‘back’, waving bye-bye to the ‘big booty’…
21st-century trends

By Ginebra Rocha
4 Mins read
We reflect on the unremarkable feeling of being “just another option” on dating apps in London.