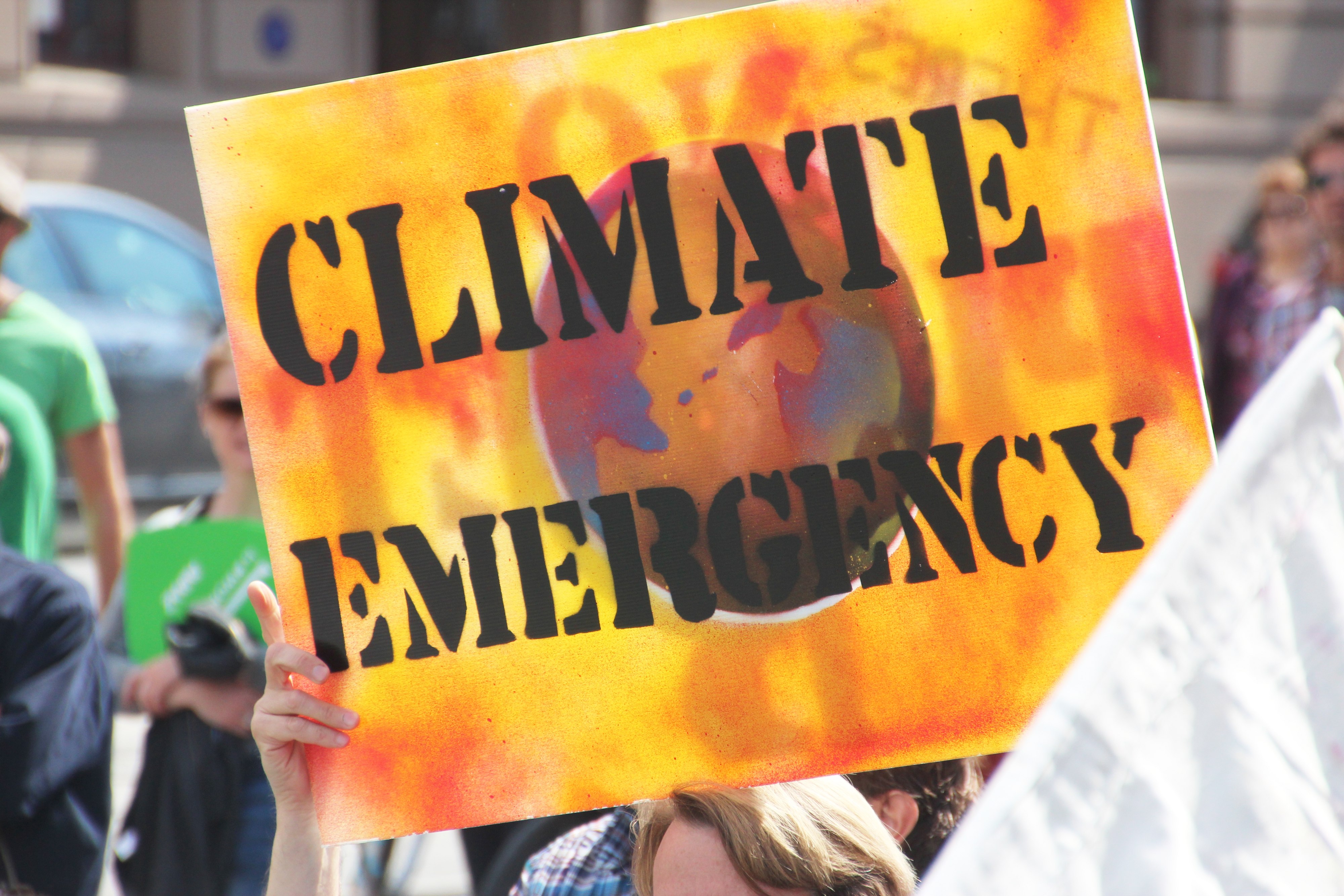 Even though many attempts are being made to prevent global warming on Earth, according to the forecasts the ocean level is likely to rise up to 82 centimetres by the end of the century, which will put low-lying countries in danger of inundation, forcing inhabitants to migrate.

The global Seasteading Institute Project suggested a controversial idea of building floating cities on the territorial waters of affected areas by 2020.

Artefact explores proposed solutions to the problem from student architects.

What to expect by the end of the century 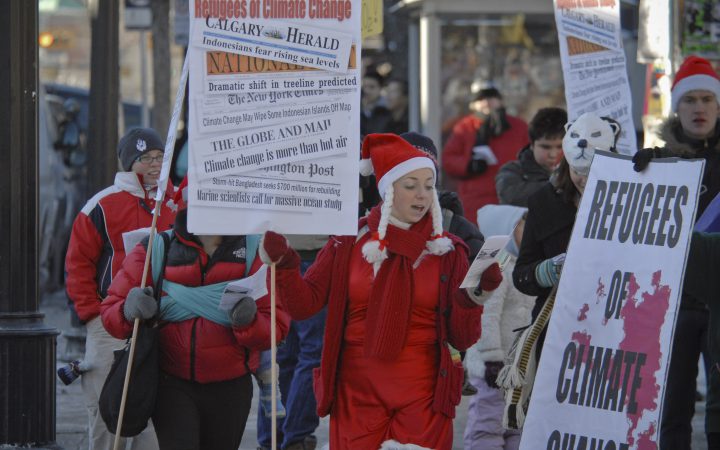 Rising sea levels are widely considered to be the greatest threat posed by climate change.

Concerned group of young activists, calling themselves Climate Change Refugees, on the International Day of Action on Climate Change.

The latest stats show that the 10 warmest years in the 136 year record have occurred since 2000, raising the annual average temperature by approximately 60 per cent, according to NASA Global Climate Change. The year 2016 has officially been recognised by the researchers as the hottest on record.

The consequences of global warming lead to the decline of the arctic sea ice level at a rate of 13.3 per cent per decade.

Even if the melting Arctic ice floes do not affect the water level in the ocean, melting ice reservoirs that are not in the water are still remaining an obvious threat and inevitably lead to the rise of the sea level.

According to a forecast from the Intergovernmental Panel on Climate Change (IPCC) the ocean level is likely to rise by between 29 and 82 centimetres by the end of the century.

These changes might not bring big consequences for the whole planet but will significantly affect areas around Vietnam, Egypt, Bahamas, Bangladesh and others.

The residents of the larger coastal cities such as New York, Mumbai, Shanghai, Miami, Alexandria, Jakarta, Lagos and even London will be under the bigger danger, projecting not less than 250 million potential climate refugees.

According to Inhabitat, Australian scientists recently discovered that five Solomon Islands have already disappeared in the Pacific Ocean.

Innovative response to the problem

A number of attempts to find a solution to the future problems are underway.

The French design studio Vincent Callebaut Architectures introduced grand in conception Lilypad project, a floating city of 50,000 inhabitants, half of which would be underwater.

The fully self-contained city Lilypad solves the main problems defined by the environmental outlook to 2030 of the Organisation for Economic Cooperation and Development (OECD): climate, biodiversity, water, air quality and waste.

However, the main problem in the way of this project, besides the high cost, is lack of government support due to the failure to recognise the seriousness of the impending threat.

Another attempt by the group of marine biologists, ecologists and engineers from The Seasteading Institute turned out to be more successful and plans for a floating city off Tahiti may be accomplished in a few years.

While a lot of similar projects were on the initial stage of projection, a memorandum of understanding has been signed for a floating city between French Polynesia and The Seasteading Institute in San Francisco on January 16, 2017.

With the support of Peter Thiel, founder of PayPal, a floating city, or as it is called by designers, “seastead”, is expected to be completed by 2020. 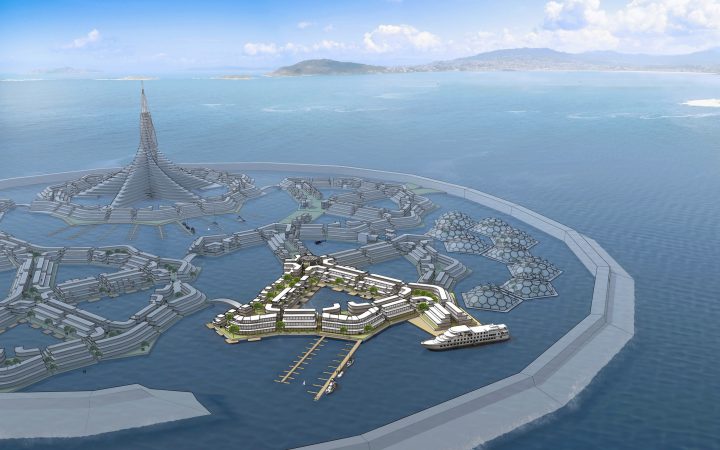 The first floating city, expected to be completed by 2020 [The Seasteading Institute]

This is a major breakthrough for an organisation.

The agreement with French Polynesia would stipulate the territory for the realisation of the project. “It would work with group to create a legal structure for seazones with a special governing framework by the end of 2017,” writes RNZ.

Randolph Hencken, an executive director of the project, claims that the seastead industry can provide environmental resiliency to the millions of people threatened by rising sea levels.

The floating city will be a network of 11 pentagonal and rectangular platforms, which can be interchanged like a giant puzzle.

All platforms will be made of 50 metres in length and height reinforced concrete, with the service life of about 100 years. 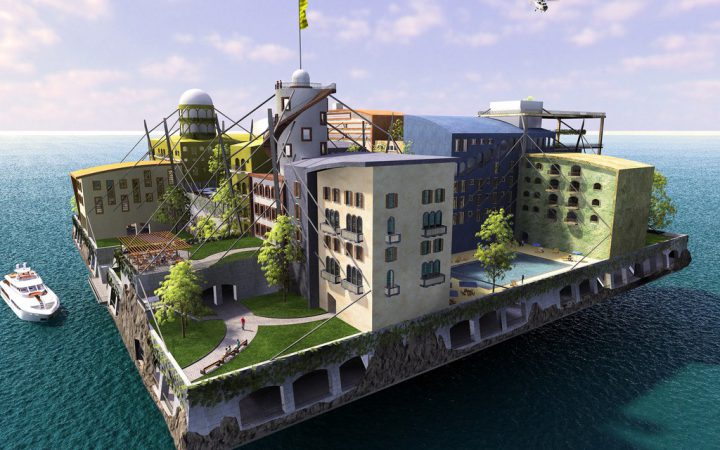 
Many future architects are convinced that it is important that architecture relates to climate change critically, because otherwise architects are merely creating response to a disaster.

For example, 36 years ago The University of New Mexico School of Architecture & Planning (UNM) had launched the series of ‘zines featuring architectural writers who have “consistently challenged architecture’s conventional wisdom,” says Phys.

Students as well as professionals present their ideas in order to critically reflect on the current problems in the world. The main focus of the last issue was a visions of future architecture on climate change and rising sea levels.

Rostami Kia told Phys: “Providing a solution isn’t always hard. The right answer is the one that can provide a proper resolution while considering all possible aspects and values of the problem, which demands a major wisdom and contemplation.”

Jared Winchester, a practicing architect and part time faculty member at the UNM, added: “What this competition stressed is the importance of changing how people experience and understand their relationship to the world in a fundamental way, and architecture should be the medium through which this redefined relationship is articulate.”

This contribution of certain architectural communities is very crucial in raising awareness on current issues.

Yet not everyone is positive about the bold attempts of inhabiting the sea.

Dima Khalzev, graduate architect from Central St Martins (CSM), believes that the idea of the Seasteading Institute is not possible today due to the incredibly high investments which do not pay off, or at best produce a very long-term payback.

Khalzev believes that it will not be possible to finish the project by 2020, as engineers claim, because not all property developers or government institutions will agree to contribute to such a risky project.

“As an example an extremely long payback of London Array, the biggest offshore wind farm, can be considered,” says Khalzev.

There are a lot of challenges on the way of the Seasteading Institute project, as a few interviewees believe.

The first problem might be the development and funding, as well as food growing. Longer term, the appropriate energy solutions have not been developed, so the support of the floating city will not yet be possible.

Mr Khalzev added that the only best solution might be a floating nuclear station, developed by Rosatom and used only in Russia.

“The right answer is the one that can provide a proper resolution while considering all possible aspects and values of the problem, which demands a major wisdom and contemplation.”

“These projects are very promising, yet are hard to accomplish in the nearest future,” said a group of students from CSM.

“The first to understand the perspective of this region was Dutch architect Cohen Oltuis from Waterstudio, but even he believes that we are yet far from inhabiting the sea. Maybe we need about 50 years for appropriate engineering solutions to appear and all of them are still at the development stage,” said students from the Architectural Association School of Architecture (AASA).

“But you can not deny this fact and say it is impossible, otherwise you are a truly close-minded man who is absolutely not versed in modern technologies and global trends,” AASA students added.

The majority of student architects we spoke to were very positive in understanding the moral responsibility to work in troubled areas. Yet some believed that the main area of work of future architects is not charity but mostly commercial architecture.

Khalzev gave an example of council estate Cabrini Green in Chicago, which has been planned as an act of support for many people but became a symbol of violence, social ills, and miserable living conditions that struck fear in the US neighbourhood.

“I don’t see any moral responsibility to work in the areas to help people, who can not use it properly and communities who have no possibility to invest in it,” told Khalzev to Artefact. “Yet I believe that we, as future architects, are prepared enough for the field, know the appropriate softwares and can contribute to the projects such as Seasteads.”

“The appropriate energy solutions have not been developed, so the support of the floating city will not yet be possible.”

For now, as many interviewed students agreed, the best solution for those whose houses will be affected by flooding are projects such as ‘Make Them Float’ in Holland.

“According to experts from the Dutch government’s Delta Commission, the sea level will rise in the country by 1.3 meters in the next century,” says DW. “The country’s flood-protection program includes 39 such projects and the efforts should protect some 4 million people in the region, at a cost of 2.3 billion euros.”

While the Seasteading Institute project seems very promising, due to the lack of investment and technologies it is possible that the engineers will need more that four years to accomplish such a bold attempt.