Bikers, prisons and civil rights – it sounds like a montage in the closing credits of a film.

However, this was history, in America, in the Sixties.

Danny Lyon is a photographer of whom I hadn’t heard of before this week, who immersed himself in all of these worlds. 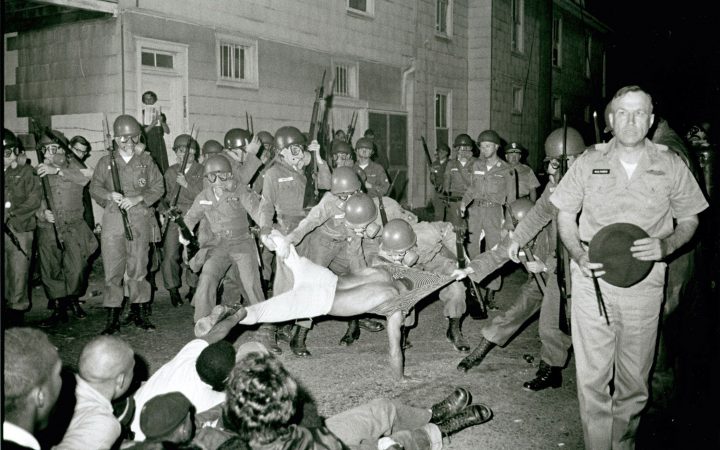 Within one of the first images you see in the exhibition there is Clifford Vaughn, an activist in the civil rights movement and a photographer with the SNCC (the Student Non-violent Coordinating Committee, a major group in the movement).

He is at as the centre of an attempted arrest: It is brutal, he is being pulled to and fro by the police and a loyal activist.

It is like is jackals battling over fleshy remains.

I wouldn’t call Lyon a voyeur of strife, that is a term mostly reserved for war photography.

However, Lyon’s images like this one illustrate his position at the genesis of New Journalism (photojournalism in his case), forever at the edge of the centre of major events of the civil rights movement from his induction into the SNCC in 1963.

He had just finished his junior year at the University of Chicago and hitchhiked to Cairo, Illinois, maybe because it was the closest flashpoint of civil rights ‘action’.

He remembers this in Pete Seeger’s Everybody Says Freedom:

“The first morning there was a meeting in a church — it was one of the first times I had ever been in a church. John Lewis [an influential civil rights leader] spoke. In his own way John was as great a speaker as Martin Luther King… Then something happened that changed me for the rest of my life. It was a fundamental break with anything that had ever happened to me before… When John finished talking, he got up and marched out the door to begin the sit-in, and the people went with him… I went right along with my camera. We marched two or three blocks to the white part of town to a swimming pool which wouldn’t allow blacks… At the end of the day, how could I not be part of the civil rights movement?”

In the end that swimming pool was closed by the city five years later because of reactions to forced integration, according to the book Let My People Go: Cairo, Illinois 1967-73.

Lyon then began working with the SNCC as a staff photographer, crammed into their Freedom House in Alabama. He recalled this sardine-tin living in Seeger’s book again, where at one time, “I’m shaving and Jim Forman is on the toilet and Julian [Bond] is trying to take a bath”. 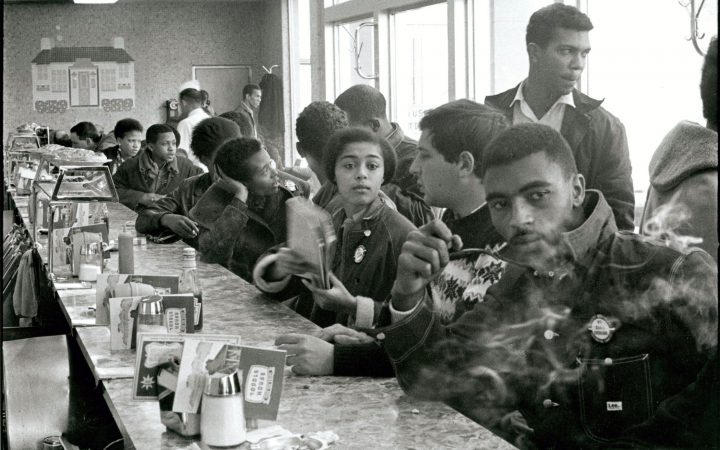 His association with New Journalism is deserved, despite photography being his primary medium.

The course of events that developed him from a more commonplace photojournalist to an activist and then an embedded chronicler.

This meant that being within a group he could project the sincerest message outwards.

Vincent Harding in Everybody Says Freedom characterises the righteousness Lyon must have felt, contributing in his own way to the making of history.

To achieve that through photography is a fleeting and luxurious moment: “With fervent determination they continued to beat at the wall. Sometimes the price was jail, sometimes it was broken skulls, sometimes it was murder… The wall was high and hard… but the cracks grew into fissures and chunks of masonry began to fall.”

In the Sixties the ‘biker’ was a growing and increasingly cult-like break from conventional society, parallel to the counterculture movement.

Fantasised about, or scorned by the outside world, both the mods and rockers in the UK and the bikers in the US had ever-growing numbers and a mythology surrounding them, in films from The Wild One in 1953 through to Easy Rider in 1969 and Quadrophenia in 1979 to name a few.

All his stories are “about the existential struggle to be free”

Focusing his lens on the well-known Chicago Outlaws, with whom Lyon lived on and off for four years, the gonzo perspective used here which he had learnt in his civil rights years is as illuminating as it is intriguing.

It is everything you expect. Runaways, the open road and sinewy, denim and leather-clad men and women.

It is the power and freedom in having very little.

This particular interest is self-evident when he told Photo District News in 2014 that all his stories are “about the existential struggle to be free”. 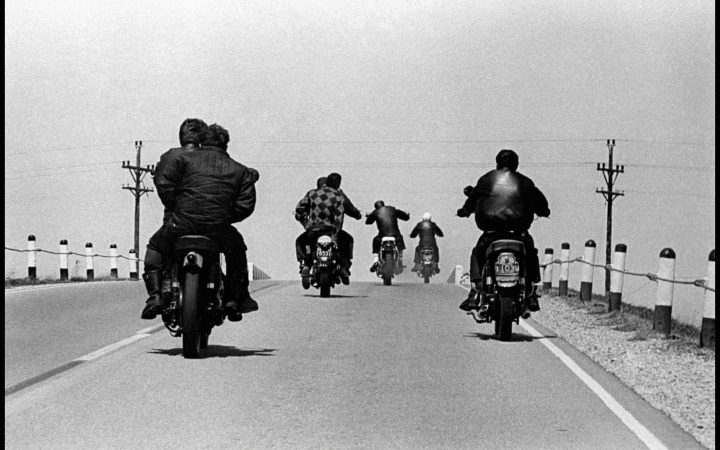 Why did Lyon become a biker?

From my experience as a photographer and among other photographers, the transient nature of your role is I think, a persistent lure.

You are constantly metamorphosed from one role to another, quite like an actor.

Maybe Lyon was content in joining whichever group he wanted and leaving in the same style.

He also comes across as quite a red-blooded individual, not unlike the common stereotype of bikers.

Looking at the images in The Bikeriders (the eponymous book the pictures are from) you would be forgiven for being overcome with wanderlust.

It is a confusing state of mind because for me, it was followed by a sense of guilt towards my easy, metropolitan life, sipping (or glugging) free Prosecco in a Mayfair gallery.

However, maybe this is just the dangerous desire for whatever it is you don’t have, regardless of circumstances. 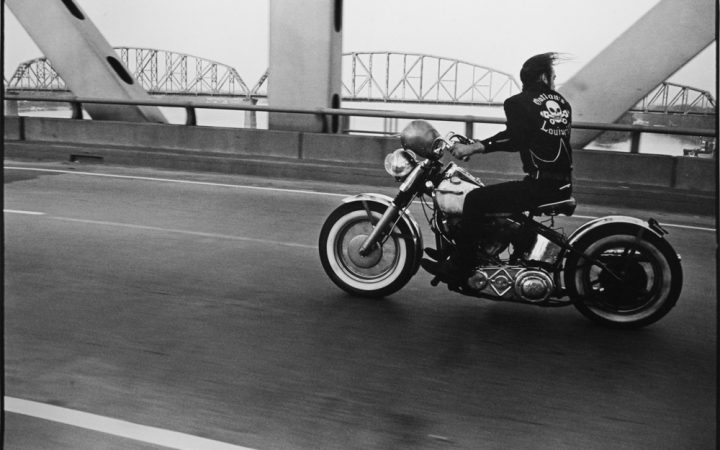 “Afoot and light-hearted I take to the open road,
Healthy, free, the world before me,
The long brown path before me leading wherever I choose.”

One wonders whether Lyon would ever have thought his images would have ended up in a gallery, selling for thousands of pounds.

The origins, environment and intention of much of his work is very different.

Returning to his civil rights days, his reminiscence reads more like manoeuvres in war: “Jim Forman was like the general — we respected him. He was ten years older than us — he was thirty-one and we were twenty-one — and he’d say, ‘Danny, you go downtown. There’s a colored-only water fountain. I want you to get a picture of it.’ I’d go, and I’d take the picture.”

The final section of the exhibition is the product of fourteen months spent within the Texan penitentiary system.

These pictures are full of pathos, frustration and drudgery. Synchronised chain-gangs and fit, young and energetic men with nothing to use it for.

In one particular image, titled Two years, burglary, I was looking at the face of a young guy called Yarbrough (according to his name badge), out in the Texas countryside during supervised labour.

He could easily be a model. His good looks, the way he holds himself, he even has the sultry open lips of a professional.

The reason this is important is that in a different place, in a different time, that’s exactly what he could be. Instead he is serving time on a southern prison farm. 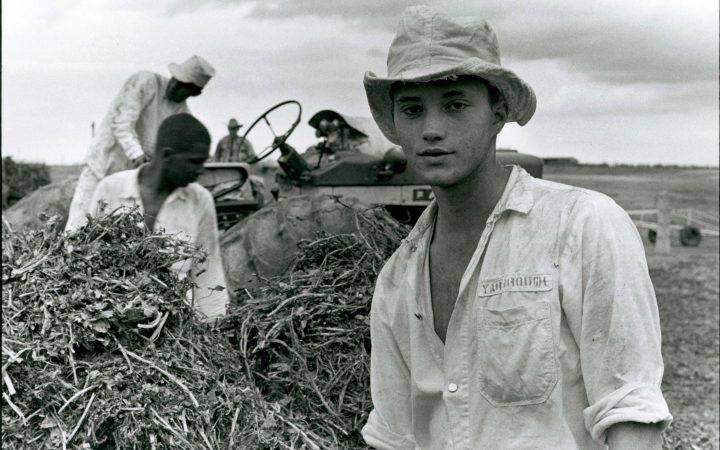 Most of the prisoners look young and as Lyon said, were going to be in for a lot longer after his project ended.

He references the poignancy of this, especially in the case of one inmate, Billy McCune, with whom he had a sincere friendship.

“Billy McCune was a remarkable man, who led a life of great suffering. If you really start reading his words, then seeing how he could draw and paint, you begin to wonder if he wasn’t a genius. As a teen he was put into the Mexia home for retarded children, Texas, because his IQ measured below 80. A great man really.”

In an interview with The Guardian in 2012 he says the same of all the men he met: “I spent 14 months talking to these guys. They broke my heart. Prison is one story after another, and every one breaks your heart. I was young enough then to care.”

There is a professor at the School of Public Affairs at the American University in Washington DC, Dr. Robert Johnson, who has written a book of poems on the very subject of imprisonment.

But no forgiveness,
no reconciliation,
the human condition
poised for perdition
here and ever-after.

Poetic justice, then, amounts to this:
Sanctions that harden started in the Garden
We were Beaten in Eden rooted out like weeds hence the seeds
of discontent
spread so widely
hence the flowers
of forgiveness
spread so thin.

It seems that a perfect mixture of events led to Lyon’s production of seminal works, defining a most significant era in modern American history.

As he said himself later in conversation with Julian Bond: “You didn’t have to be too bright to realise that a historical event was taking place in front of you.”

Danny Lyon’s photography is cutting and affecting. It is all-American.

Photographs by Danny Lyon, provided by Beetles and Huxley.