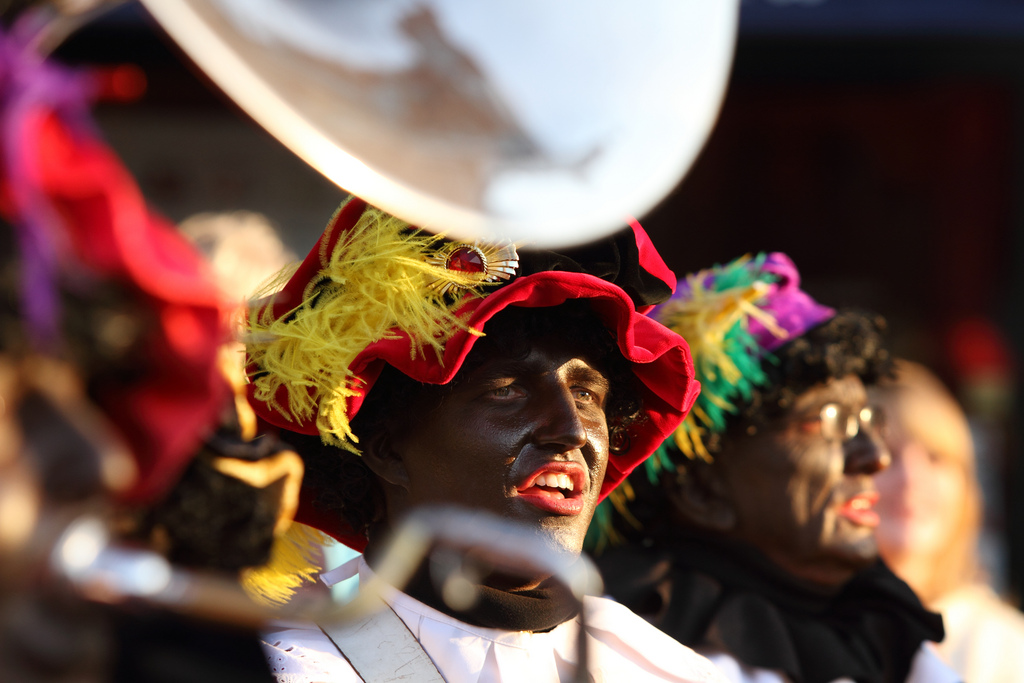 Christmas season has been over for a little while now. Many towns and cities may still have their Christmas lights up and most of us, if not all, are financially recovering from their festive shopping sprees but all in all, everything is back to normal.

In the Netherlands, the same thing is happening. A Dutch festive season and a British one are not too dissimilar. We have the same traditions; Christmas trees, mistletoe and the basted turkey.

However, there is one jarring difference that has raised eyebrows around the world. In the UK, you have Santa and Santa’s little helper.

Santa’s little helper is a charming elf with pointed ears and pointed shoes with bells on the end to match.

The elf can either be alone when giving out presents to children or in a group. Either way, It’s always exciting when he accompanies Santa.

In the Netherlands, we have Zwarte Piet (Black Pete in English) accompanying Sinterklaas (Santa Claus). Zwarte Piet essentially carries out the same roles as the elf but the problem isn’t with what he does but what he looks like.

Zwarte Piet is identifiable by his Moorish costumes, pitch black skin, afro hair and exaggerated gigantic red lips. He is almost always played by a white Dutch person. Although he may be a jolly character, a rising amount of people consider him to be a caricature of a black person.

“The Dutch tradition started as Sinterklaas with Krampus. It celebrates the light and the darkness.”

This characterisation has led to large protests and arguments across the nation over the past few years, although many Dutch people say he’s a harmless part of their Christmas tradition, thus causing conflict and bringing up the debate of race and discrimination.

Kevin Roberson, who has campaigned to remove the figure from Dutch society and has reported on the protests since 2013, says that the whole practice is atrocious labelling it a “21st Century minstrel show”.

He also highlights how the relationship between Sinterklaas and Zwarte Piet is a modern representation of the slave trade that the Netherlands used to be a part of, which makes it extremely controversial within the current multi-cultural global society.

Filip*, who strongly defends Zwarte Piet, insists that it is only a tradition and it existed before Dutch people ever interacted with black people.

The history of where this character came from varies depending on who you speak to as there is no substantial evidence to pinpoint it to a specific origin.

“The Dutch tradition started as Sinterklaas with Krampus. It celebrates the light and the darkness,” says Roberson.

He explains further how the essence of Zwarte Piet may have been present since the Pagan festival of Yule where people would dress up as the physical form of day and night. This celebration eventually evolved into the Christmas that we know now.

The Krampus figure is prevalent across Germanic culture, stretching all the way across to Austria due to its pre-Christian Alpine origins.

Filip however, believes that Zwarte Piet comes from somewhere else; he says the character derived from the folktales of the Harrii; a collection of ‘ghost warriors’ who painted themselves black before battle to ensure camouflage because they only attacked during nightfall.

“Others say they are the ravens of Odin who watched his people, to see if they behaved themselves or not”

Ancient Roman historian, Tacitus, actually refers to the fighters in his work, Germania. The Harrii are often linked to the Einhärjar, the souls of fighters who have died in battle and now reside in Valhalla with Odin.

“They say Odin was so proud and impressed by their cunning that he took them into his army,” Filip explains. “Others say they are the ravens of Odin who watched his people, to see if they behaved themselves or not.”

However, the first record of Zwarte Piet as himself came much later than these folktales. 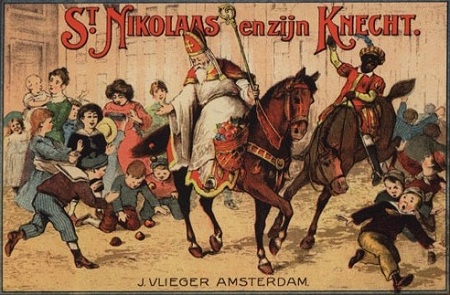 “In 1850, Dutch teacher, Jan Schenkman wrote a book with the title: Sinterklaas en zijn Knecht (Santa Claus and his servant). This book had the first illustrations of Zwarte Piet in his current form. Each year Sinterklaas arrives from Spain with a boat full Zwarte Piets and gifts,” Roberson told us.

The book was used to catalogue all the Christmas traditions that the Dutch had. He introduced the idea of Sinterklaas entering the Netherlands via steamship.

He also developed the characteristics of Zwarte Piet by including details such as him putting children in bags and taking them back to Spain if they’re naughty.

He takes them back to Spain because it is also believed that he is a Moor from Spain.

The term Moor refers to the Muslim Arab community that lived in Spain centuries ago and the word “Moor” or “Moren” in Dutch could originate from the Spanish word, moreno (brown).

Moving on to the present, the idea of Zwarte Piet has divided a nation that always represents itself as an open-minded multicultural nation.

According to the general consensus, there are more people who are indifferent with the character than those who find it a problem.

“It is a tradition but it also says something about our society. Because it tells who we are and where we came from. It is our roots. It is our childhood but also even deeper it brings us back to the time our ancestors tried to survive. Zwarte Piet who isn’t black is like a Santa Claus without a beard.” says Filip. 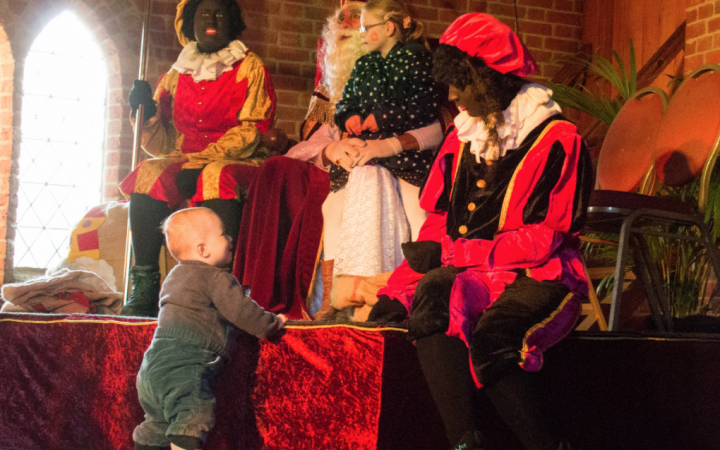 However, Roberson has a completely different opinion. He says that it’s a tradition that was sabotaged by Jan Schenkman by adding an unnecessary racist element.

He points out how this character is a remnant of Dutch popular culture during a time when the Netherlands was still involved in the Trans-Atlantic slave trade.

“They forced former slaves to remain on plantations until 1873 as a way to compensate their former owners for the workforce they lost. The former slave owners also received a financial compensation from the Dutch government for each slave they had to free.”

Since the end of the 20th Century, the fight against the character has grown with campaigns such as Zwarte Piet Niet and Zwarte Piet is Racisme coming into being.

Simultaneously, the reaction towards these protests is getting stronger with the likelihood of being attacked for not agreeing with Zwarte Piet increasing and vice versa.

“In Africa, there are tribes who paint themselves white with chalk  but you don’t hear anyone protesting about that.”

“I think they [the protesters] feel discriminated. Their view of things is twisted, they say all black people are feeling discriminated because Zwarte Piet is a white man who is painted black and but it’s meant to be funny,” says Filip.

“But there are also black people who love this tradition and even are playing Zwarte Piet in Curacao. They never have this discussion they love it over there,” claims Filip.

“In Africa, there are tribes who paint themselves white with chalk but you don’t hear anyone protesting about that. You also don’t hear what they call us [white people].” 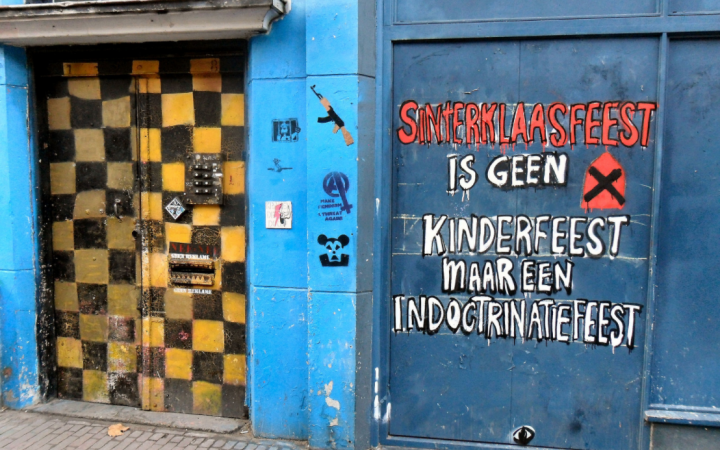 Graffiti: “Sinterklaas festival is not a kid’s festival, but an indoctrination festival” [Kees Stoof]

The issue of Zwarte Piet has become a focus of protests and demonstrations across the political spectrum with right-wing extremist groups organising pro-Zwarte Piet demonstrations to counter what they see as an attack on traditional Dutch culture. The opposing side has done the same in creating protests in order to enkindle an outrage on injustice.

On November 12, 2016, 100 protesters were arrested for causing a scene during a Sinterklaas parade in Maasluis, Western Holland.

Roberson says that his views on Zwarte Piet have brought him into conflict with some Dutch people who do not believe that the character has racist undertones.

He informed me how he was recently attacked because of his dislike of Zwarte Piet. Thomas Bruning, a secretary of Journalistenvakbond NVJ , a journalist union, described it as a serious attack on a journalist trying to report.

It’s not the first time he’s been in a situation like that as he regularly has run-ins with members of far-right groups such as Sons of Odin, Identity Resistance, and the Dutch People’s Union.

Filip, as a white Dutch National who has only ever lived in the Netherlands, says his views have also caused disputes. He states that he has been called a Nazi often and has even had his life threatened

Despite all this, he insists that most people love Zwarte Piet and hopes that the tradition can be carried on to his children.

The more and more this part of Dutch culture has played out through the media, the more attention it has received worldwide with many western and eastern countries alike condemning the practice and encouraging the Dutch government to reevaluate the character. 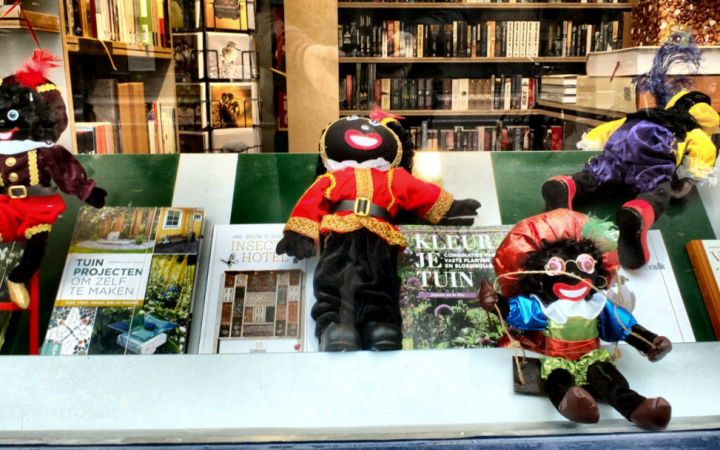 The UN, EU, the Netherlands Institute for Human Rights, the National Ombudsman, etc have stated that Zwarte Piet has racist elements but there are changes taking places.

Zwarte Piet, Krampus, Odin’s Raven, whatever you call him, is an entity that has been around for centuries but the question as to whether it should stay or disappear still goes on.

Many older Dutch individuals insist that he is so far ingrained into their culture that it is a crime to have him removed but a recent study shows how millennial are less tolerant to this idea and are more in favour of celebrating Christmas without any colonial hangover.

Could this mark the end of Sinterklaas’ helper?

*Not his real name – the individual spoke to Artefact on condition he remained anonymous.