The most violent sport on Earth

Florence, Italy, is known worldwide for being the cradle of the Renaissance; Leonardo da Vinci, Michelangelo Buonarroti, Sandro Botticelli, Donatello and Brunelleschi all share the birthplace.

It’s not common knowledge, however, that Florence has also laid claim to be the motherland of football. Called “calcio storico”, historical football, can be considered an early version of modern football, although it is barbaric and violent.

Football was born in Florence, deriving from the early Greek “sferomachia” and then the Roman harpastum, played by the legionaries to keep themselves fit ahead of the battles. Florentines invented the way of playing football with the feet.

This is how the Calcio Storico Fiorentino, Historic Football of Florence, was born. 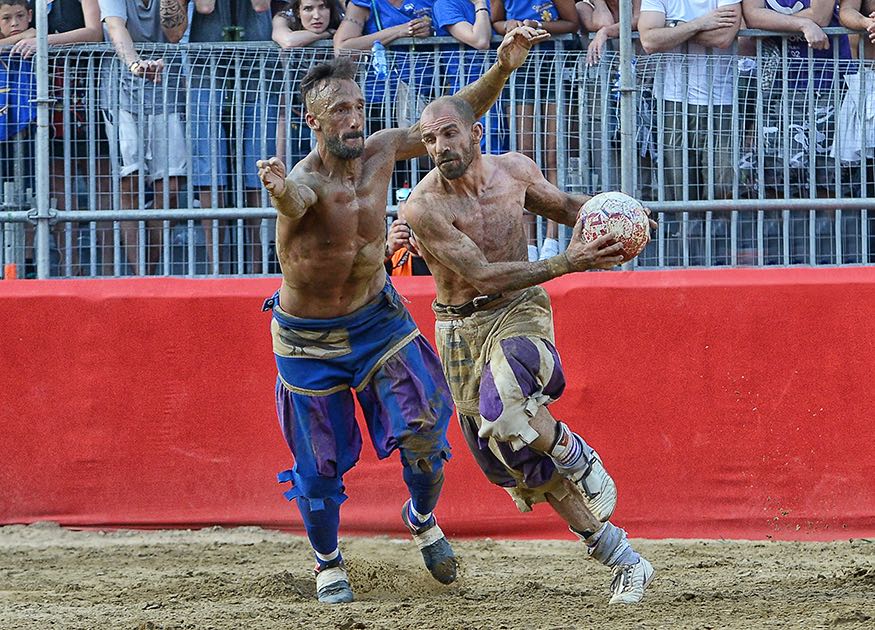 Players carrying the ball to score a “caccia” [Maurizio Rufino]

Historic Football was played in the Renaissance by noble and important people of Florence, reserved for rich aristocrats. Even Popes, such as Clement VII, Leo XI and Urban VIII, were known to play this sport

Florentine troops and the most valorous soldiers used these forms of historical football to keep fit and as training in preparation for warfare just as their Romans ancestors did.

Arguably the most historic game was played in February 1530, when Florentines played Calcio Storico for the first time in Piazza Santa Croce, despite their city being under siege by the French troops of Emperor Charles V.

“Playing Calcio Storico is exactly as fighting a battle”

This was a demonstrative act aimed at making sure that French troops knew that Florence and Florentines were to be ruled by no foreign leaders.

This historic event is important in understanding the pride of any Florentine, who, rather than kneel before their enemies, played a game of Historical Football.

This pride has seen Calcio Storico surviving into the 21st Century with games still being played in Santa Croce square, which is converted into a stadium with temporary grandstands playing host to cheering fans.

The historic city centre of Florence is divided into four quarters, each with a church at its centre.

Calcio Storico is played by one team from each quarter; the Greens of San Giovanni, the Whites of Santo Spirito, the Blues of Santa Croce and the Reds of Santa Maria Novella.

Originally the teams played every night between Epiphany and Lent (January to Easter).

On Easter Sunday, in front of Florence’s famous Duomo, fans are treated to a traditional celebration known as Scoppio del Carro, which translates as “Explosion of the Cart”.

The display features a cart, packed full of fireworks and other pyrotechnics, which is lit to provide an historic spectacle in the civic life of the city. On this occasion, the draw for the traditional games of Calcio Storico take place. 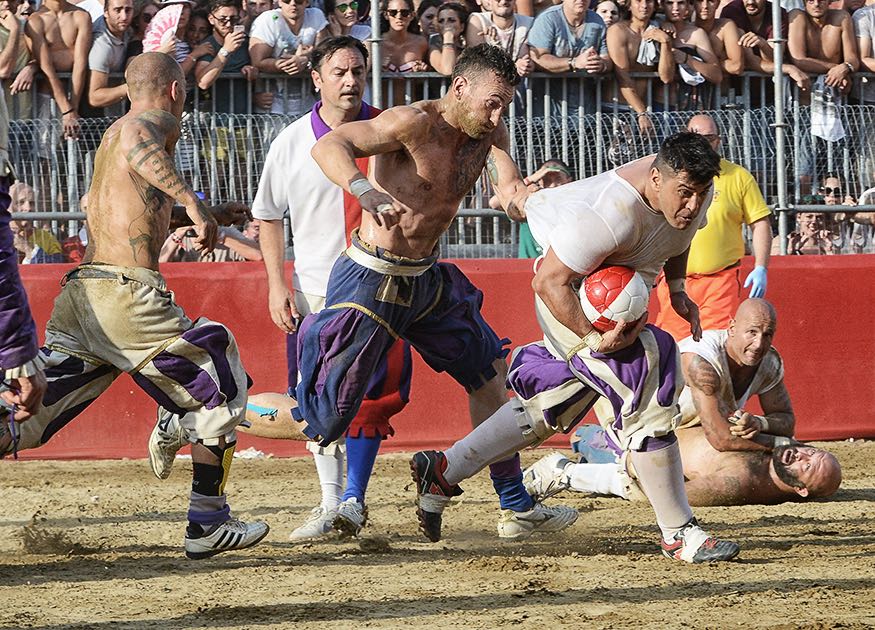 The semifinals are played throughout a week-end in early June and the final, between the winning teams of the semifinals, of Florence’s Calcio Storico tournament is played on June 24, when Florence celebrates its Patron Saint John the Baptist.

There is not final between the two losing teams.

The symbol and colour of each team is pictured on the right hand of the trousers of the players, which resembles those worn in medieval times.

Prior to kick-off a long traditional parade takes place from Florence’s Santa Maria Novella to Piazza Santa Croce, presided over by nobles on horseback and the players of each team.

The game begins with the cry: “Viva Fiorenza!” archaic name of Florence, used during the Middle Ages.

Matches last 50 minutes and are played on a field covered in sand, twice as long as it is wide, 80 by 40 meters. A white line divides the field into two identical squares while a goal net runs the width of each end.

The match starts with the Pallaio, throwing the ball into the air on the center line and the next “shot” of culverins, hailing the opening of hostilities.

From this point on the two teams will try by any means to get the ball into the net scoring the “caccia” (goal).

At any “caccia” scored, teams have to change sides. It’s important to shoot with precision, because every time a player throws or kicks the ball above the net, the opposing team is awarded with half a caccia.

There are no substitutes, if a player gets injured, can’t be replaced.

As soon as the match starts, a central row of players start to punch, kick, hack and wrestle one-on-one, with any strike allowed, in an effort designed to tire opponents’ defenses, forcing to submit as many players possible.

The Captain and Standard Bearer’s tent sits at the center of the goal net. They do not actively participate in the game, but can organize their teams and sometimes act as referees, mainly to calm down their players or to stop fights.

There are very few rules, what rules there are forbid blindside punching, hitting a player on the ground and the use foreign objects.

If you are caught in breaking these rules by the referee, a player’s name is called out leading to their instant dismissal. Players who refuse to leave can cause their team to lose the match. 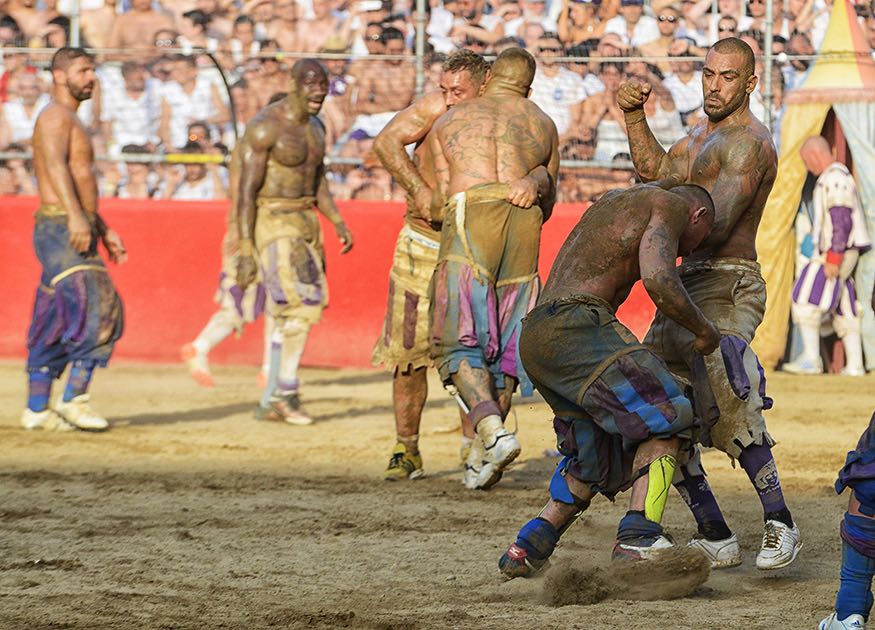 The winning team of this competition does not receive money for their victory but rather take pride in its sentimental meaning.

Historically, the winning team were rewarding with a type of cow known as a Chianina. However, the prize has been changed to a free dinner.

Speaking with some of Calcio players, Artefact asked how it feels to actually play the sport and whether is right or not to define it as game, as for some it goes beyond that.

“Violence is an inherent part of this game, it can’t be denied,” said one player, “spilling the blood in the arena, for us, it means a lot, it means perpetuating the history of Florence.”

“The players are strong athletes, physically prepared, courageous, tough, who are ready to give their heart for the team,” the players told us. “Historic football is more than a sport, and more than a commemoration, it evokes the middle ages and the Renaissance, it is a war.”

“All the players show the values of chivalry, toughness but more than everything the pride of showing they are from Florence,” they said. “No-one gets paid for almost risking his life, you play for the glory, for the pride getting nothing in return.”

“It’s easier when people get paid for doing things but when, no money is involved, you are just driven by your heart.” 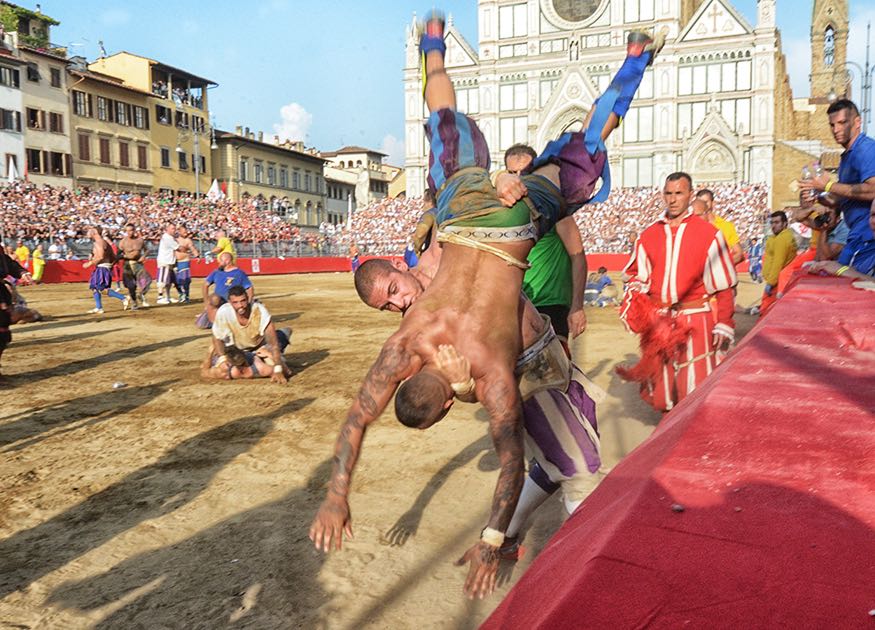 “The fear, like the violence, is an inherent part of this game, it is human and it’s normal being scared but it is the fear that lets you achieve the greatest things in life, you walk in on your feet but you really don’t know how you are going to walk out.”

“I have always looked at it only as a game. I have never taken out the match the rivalries with other players, from the first minute to the end, we are enemies but when the final whistle blows, we are friends as we used to be,” he said.

“This game is difficult to understand outside Florence, the neighbourhoods have always characterised the lives of people in Florence,” he told us. “People used to born, raise and then live your whole life in the same neighbourhood.” 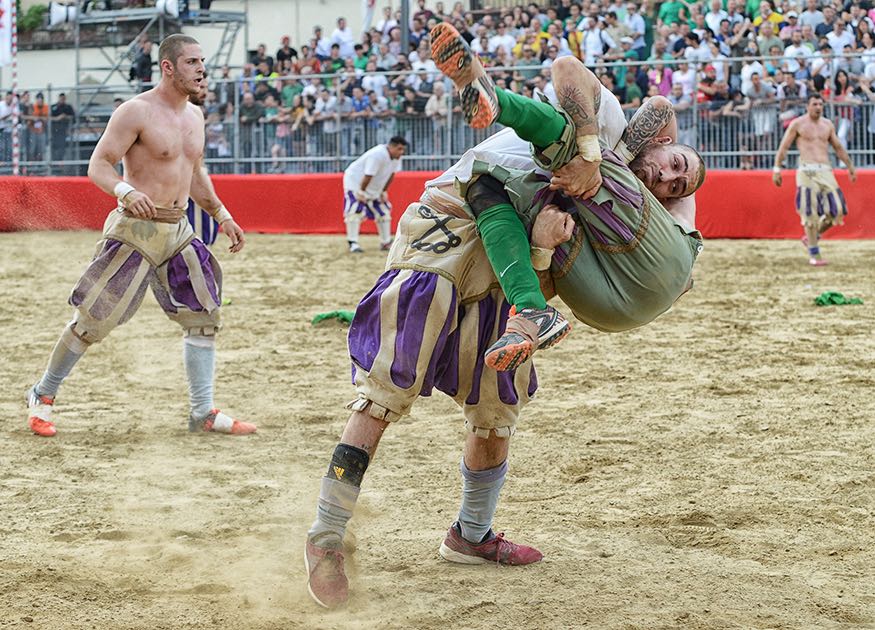 “For instance, people born in the Santo Spirito quarter, during the Second World War, have shared terrible moments together, have helped themselves, have fought the hunger together and they have rebuilt the quarter, after the bombings, brick by brick together.”

“There is something which goes beyond the mere friendship, we are dealing with values of brotherhood and family,” di Puccio said. “During any Calcio Storico game, there are at least 5,000 to 7,000 people who come there just for you, supporting you with chants.”

“I have always played rugby with almost no spectator cheering me on, if you start playing Calcio Storico, you become a local hero, with people asking you photos and autographs,” he said.

“The main sport played by the participants of the game are Rugby and Mixed Martial Arts (MMA) nowadays. The football and rugby schemes were notable during any game, the ball was passed fast in order to score as many goals as possible.”

“Nowadays, it’s getting more static and flat, with the central row of kickers sparring and punching in order to dismantle the opponents team, trying to score with a personal action but being careful of not losing possession avoiding, a counter attack at any cost.”

“There is a growing athleticism and dynamism in the sport, which characterises players of any team,” di Puccio told us. “For instance many players are now MMAs fighter, boxers or a Greco-Roman wrestlers.”

“In my days, there was nothing but an ethical code, any strike was literally allowed, two against one or even three against one was allowed” he said.

“The only existing rule was when the referee stopped the game, caught the ball then waited until he threw the ball again in the air, which meant that game was resumed.”

However di Puccio said times have changed: “During the 1990s regulation were impose to prevent the players sustaining fatal injuries. I have always wondered how a tragic fatality had never happened.”

He admits sometimes, they have come close: “In one match, I was kicked very hard in the head while I was lying on the floor, I still don’t realise how I could not have been seriously injured.”

“Historic football is only possible in a peaceful town like Florence, which is stranger to violence down the streets and underworld episodes. We fight each other in the arena, unleashing everything we have inside but after that we are friends.”

You can judge for yourself – this video is the 2016 final played between the Blue team and the White team.