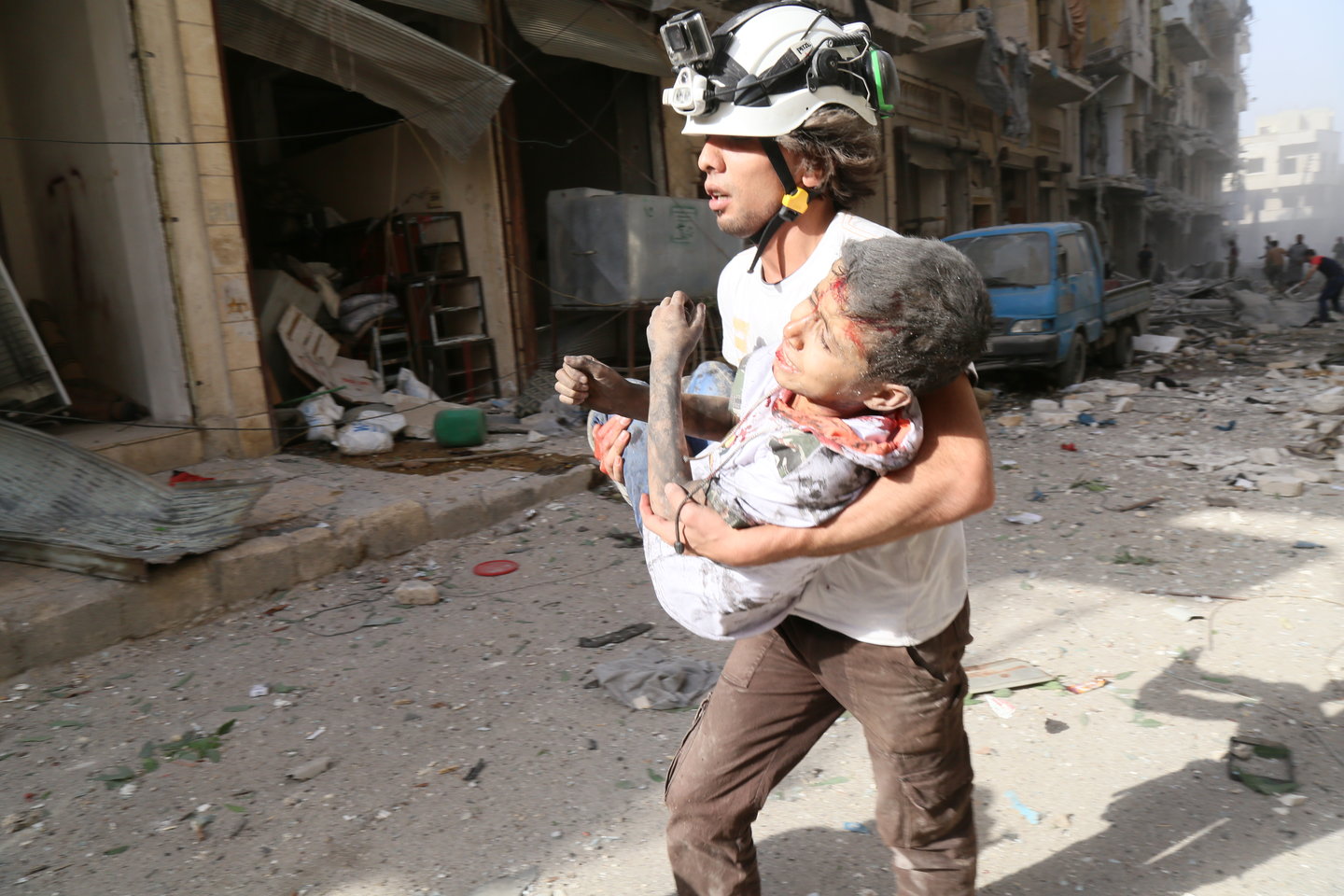 The situation in Syria changes on a daily basis. In the last couple of years, the humanitarian conditions have deteriorated from terrible to barely survivable.

In the conflict involving many warring parties, civilians are paying the highest price, but in the middle of the desperation and chaos, there are many inspiring heroes.

When bombs rain down, the so-called Syria Civil Defence rush in. In a place where public services no longer function, these unarmed volunteers risk their lives to help civilians in need.

Known as the White Helmets, these rescue workers operate in one of the most dangerous places on earth. For five years the headlines on Syria have been dominated by terrorists and dictators.

But as of September last year, the Oscar-nominated documentary The White Helmets has given the outside world an insight into the daily life of ordinary and brave Syrians.

In a recent screening of the short film followed by a discussion in the Palace of Westminster, it became clear that they have gathered support from across the Western world.

“People in Aleppo are wishing to be killed and not to be injured, because there’s nowhere to go to find treatment”

“In Syria today infrastructure and emergency services have all but been destroyed in non-regime controlled areas. The events in Aleppo at the end of last year highlighted just how desperate the situation is for civilians who remain. The White Helmets’ work is therefore absolutely crucial,” Joanna Natasegara, producer of The White Helmets, told Artefact.

The around 3,000 volunteers within the grassroots organisation come from all walks of life: tailors, carpenters, builders, doctors and university students.

When attacks take place, the White Helmets are often the first responders at the scene. Their search and rescue teams dig people out from under the rubble and drive them to safety.

While the White Helmets have saved more than 78,500 lives, 154 volunteers have been killed in Syria while on duty.

Given more and more recognition outside of the Syrian borders, the White Helmets have won the Right Livelihood Award as well as been nominated for the Nobel Peace Prize.

The documentary about the organisation was filmed in January last year but today, 12 months later, many things have changed.

The footage shows moments of joy as a one-week old ‘miracle baby’ is saved after 16 hours under rubble. It also shows moments of horror as one of the volunteer’s is told his brother died in bombardment targeted at a hospital. It gives a sense of the everyday-life the civilians have to endure in a war-torn Syria.

“What you have seen in this film has become the past. The White Helmets centres you see in the film, has been destroyed. The man who rescued the miracle baby from underneath the rubble has also been killed,” Raed Al Saleh, Head of Syria Civil Defence, told the meeting in the House of Commons.

“People in Aleppo are wishing to be killed and not to be injured, because there’s nowhere to go to find treatment,” he continues. 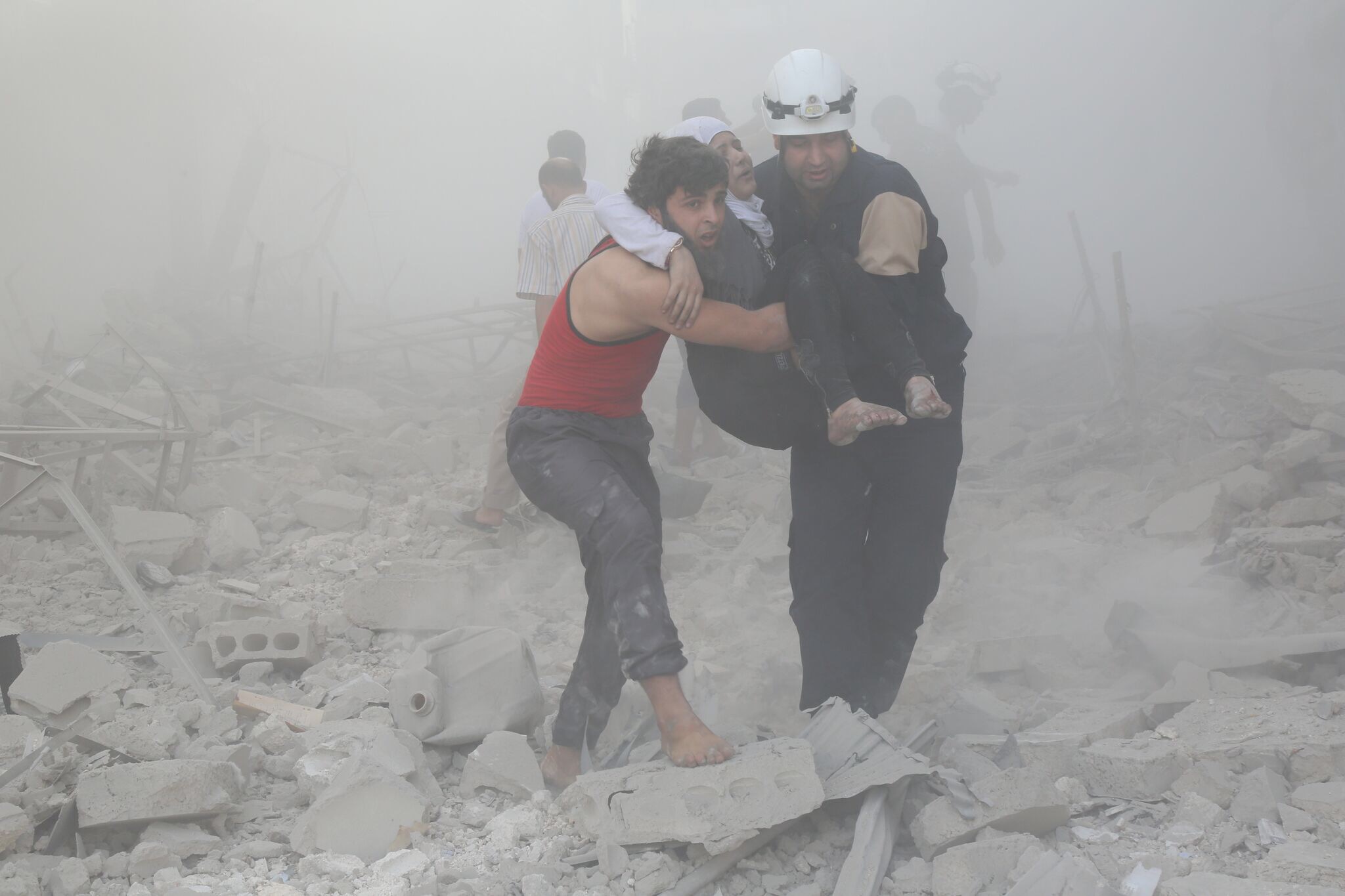 At the moment, an end to this war is unimaginable. As one of the deadliest conflicts of our era approaches its sixth year, Syria has been destroyed beyond repair.

The most recent efforts to bring about a ceasefire, in talks between Turkey, Russia, Iran and the Assad regime at the end of last year, did provide some break from the fighting in certain areas.

But the regime’s forces have continued to attack armed rebels around Damascus and other areas.

“We want people around the world to know that Syria is not just Assad and Isis. Rather, there are millions trapped in the middle and many heroes serving them, working every day, dying so that others may live,” Al Saleh says.

“The air space the coalition is using to bomb ISIS is going through the same neighbourhoods that are starving. They are able to drop aid into these places. You cannot say that you can’t do anything. The airspace and where the coalition is taking off is only 15 minutes away from the besieged areas,” Al Saleh continues.

In the Syrian conflict, information is in short supply as rumours, propaganda and misinformation substitute for accurate news and information.

Coinciding with a time when fake news is becoming increasingly common, some critical voices are raised against the White Helmets.

While Russia withdrew from the International Criminal Court at the end of last year, they have criticised the organisation for spreading Western propaganda.

Some critics point to the fact that they are operating exclusively in opposition zones. Others believe that the funding they receive from the Western world contradicts their stated neutrality.

However, since 2013 the former British army officer James Le Mesurier has overseen the training of the White Helmets at a centre based in Turkey.

“The White Helmets have been made a target of regime attacks”

He has spent 20 years working in fragile states as a United Nations staff member as well as a consultant for private companies and the UK Foreign and Commonwealth Office.

In 2014, he founded Mayday Rescue, which is dedicated to strengthening local communities in countries that are entering, enduring or emerging from conflict.

Le Mesurier believes that allegations of a clandestine Western scheme have become a common tactic among some who oppose the White Helmets.

“There is nothing secret about what we do and where we get our funding. We are a non-profit organisation and we try to raise around £19m annually for all the equipment, training, vehicles and protective clothing and salaries for the rescue teams,” Le Mesurier told the Independent.

Addressing the criticism too is Natasegara who says that “the White Helmets have a neutral charter, committed to saving life on all sides of the conflict; they will help anyone in need.”

“Whilst filming, we learnt that the White Helmets had been restricted from operating in other areas of the country by the Syrian government and, in fact, they have been made a target of regime attacks themselves,” she told Artefact.

While wars might make one suspicious of one another, it is important to let the facts and numbers speak for themselves.

The White Helmets risk their lives in a time when the rest of the world close their eyes, but it’s never too late to act: “We don’t deny that some of our members were former fighters, but we have persuaded them to give up on the path of death and embrace the path of life,” Al Saleh says.

Ever since its establishment, the White Helmets have received extensive support from individuals and organisations all over the world.

In the UK, the MP Jo Cox championed the Syrian cause in her 13 months in the House of Commons. At the end of last year, Cox received a posthumous peace prize jointly with the organisation.

“We lost our dear friend Jo Cox to the hands of terrorism. As we lost many friends in Syria, and many members within the White Helmets because of terrorism and because of the fact that the international world has decided to not to fight for human rights. Be sure that we are still working on the message of Jo Cox, and we’re not leaving that path,” Al Saleh says.

“The political situation to date has been a disaster. Yet despite all this, the White Helmets continue their work, showing that even in the darkest of times, there is still always hope. The White Helmets represent the best of humanity,” Natasegara says.

Never before has it been more clear that something needs to be done to fight terrorism. Ordinary Syrians and the Western world are all fighting the same enemy.

But as bombs continue to fall down from all warring parties, the White Helmets say they will stay until the end.

“There has to be a commitment from the party leaders, that this is not a political issue. It’s a unified UK issue,” Natasegara, said to the House of Commons, her comments directed towards the attending MPs.

“You need to lean on the party leaders to unify and say ‘we will not have this’, we will stand up to Russia just as the US were doing pre-election. They’re in trouble now, but we still have the opportunity to work as a house together to decide that this is not something that the UK accepts,” she concludes.