The Holocaust International Remembrance Day (January 27th) is annual ceremony day where we can remember and spend two minutes of our daily lives to remember the atrocities committed against human beings (Jews, Gypsies and Homosexuals) during World Wa Two.

The United Nations decided this specific date as it represents the day the Soviet Army opened the gates of the extermination camp of Auschwitz Birkenau in January 1945.

Every year, in every European capital, where the horrors of the Shoah took place, holocaust survivors gather to share their experience in the hope of developing a sense of tolerance among future generations.

On January 27, 2017 at the Memorial of the Shoah of Milan, Liliana Segre, an Italian lady (pictured above) told the story of her dramatic experience at the extermination camp of Auschwitz-Birkenau at a special conference.

The event was attended by students, academics, members of the Milan Town Hall (including the Mayor himself) and members of the Jewish community of the city.

It was obvious from the tone of her voice that she remembers the events in the camp as if it were yesterday; her horrific experience, losing her entire family and friends – everyone with whom she had grown up.

Liliana started her speech by trying to explain how shocking and terrible the racial laws for the Jewish community in Italy and Europe were, especially for an innocent 13 year-old girl whose only mistake in her short life was to have been born a Jew, which was an inferior race according to the Nazi-Fascist laws.

After few minutes trying to make us understand what it means for a normal child to be deprived of the opportunity of going to school, the cinema, supermarket or any other place a normal children would go, she started to explain her journey with her beloved father, Alberto Segre, to this unknown hellhole which is now known as “Auschwitz-Birkenau”.

Her testimony was based on her personal experience in the extermination camp. She described the terrible journey from Milan to Poland in 1943 on a cattle truck with more than 800 innocent people, in inhuman conditions with no water, food or any kind of basic amenities.

The journey lasted almost a week and as soon as she arrived in Auschwitz, she lost her beloved father, who was considered by the Germans as “unfit for work” and immediately sent to the gas chambers.

She spent more than a year in misery; from October 1943 to January 1945 and throughout her imprisonment she changed drastically.

She explained how tremendous is to lose someone you truly love and how she had to force herself to blot out her surroundings and that the only thing she had in mind was: “I want to live, my only aim at that moment was to survive, go back home and move on if I can.”

Liliana’s weight at the end of this “undesired experience” as a virtual slave was of only 31kg.

She has also explained how important is for her to share her experience to young generations all over, to teach them the importance of life and mutual respect.

Liliana strongly believes that today’s generations are incapable of facing difficulties as they have been raised in total comfort and luxury; therefore, she believes that as long as she “still has air in her lungs”, she has the moral duty to tell her story, to tell the world what humans are capable of, capable of torturing an innocent 13 year-old girl, turning her into a living-slave even forcing her to the ‘Death March’ in the Winter of 1945, despite all odds.

The entire audience was moved at the end of her speech when she told them her motto: “Life always wins”, and she told the tale of the opportunity she had of avenging her family after being liberated by the Russians.

Before her, stood a Nazi officer whom she could easily have killed with a gun, but she suddenly realised that she could never bring herself to kill anyone because life is more important, and that by killing that person – despite all his wrongs –she would be stooping to his level.

The International Holocaust Remembrance Day is still relevant to our modern society, where we see massacres and injustice all over the world – it teaches us the consequences of radicalism and extremism, both right and left wing.

Quoting the author and Shoah survivor, Elie Wiesel: “For the dead and the living, we must bear witness”. 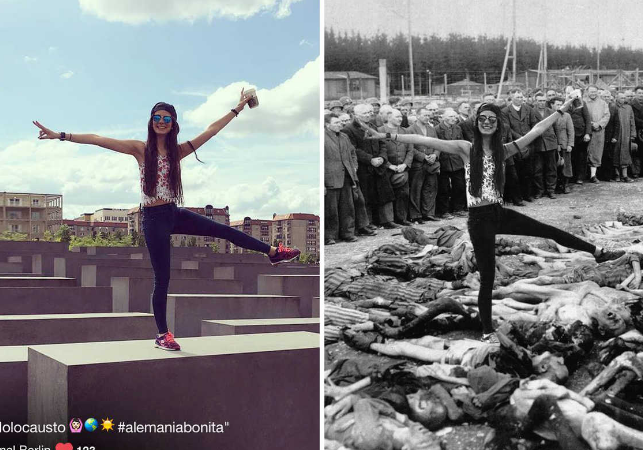 The Israeli satirist, Shahak Shapira unveiled an online project named “Yolocaust”, sharing with the world the message for those who not only act disrespectfully at a Berlin Holocaust memorial but capture their behaviour and share it with their friends on social media.

It seems disrespect and prejudice are daily occurences in our society, where we are witnessing, again, the fear of an potential international conflict provoked by extremism.

These are the moments where, according to Liliana Segre’s philosophy, the survivors have the moral duty to share their difficult experiences in order to install in younger generations the idea of equality, respect, the irrational belief of anti-semitism and above all to not be indifferent when important circumstances challenge society.

It is ironic that some people in Middle East, like Mahmoud Ahmadinejad, the former Iranian President, Mahmoud Abbas, president of the Palestinian Authority; or an aide to Mohammed Morsi, the deposed Egyptian president and member of the Muslim Brotherhood – who, to different degrees, denied the Shoah, and so threaten their own version of a new Holocaust.

Many scholars and academics would argue that we are experiencing a time in history very similar to 1930s in Europe, with the same vibe of hypocrisy among the people; where a huge number of protestors gathered, from the US to Europe, to protest and against Donald Trump’s anti-terrorism immigration ban, but no one ever defended nor demonstrated in favour of the Israeli citizens that were banned from entering almost all Muslim countries, beside Morocco, for over three decades.

Social injustice and populism are real threats that all generations have to face and so it is vital to remember what happened – survivors and witnesses have to speak up and tell us what happened until all humans will be judged not by what they represent or believe, but most importantly by their actions.

By Natalia Zelazowska
7 Mins read
How Lulla La Polaca is living proof that age is not an obstacle to living life at its best.
Life

Fighting for LGBTQ+ rights in Poland

By Natalia Zelazowska
6 Mins read
How the Stonewall Group are helping to support and protect the LGBTQ+ community despite growing discrimination in the country.
Fashion

By Alice Stoner
5 Mins read
Camouflage clothing was developed originally for war, used by people to avoid being seen. It’s now a trend that is impossible to miss.