When indie artists get ripped off

Independent artists work hard to create work that is new and innovative.

Most of the time they do their work just because they love doing it and make their money from selling small pieces on online shops such as Etsy.

Corporate companies are aware of the fact that these indie artists are often not on a high income and cannot take legal action, they take advantage of this and sometimes appear to use their work on their clothing or merchandise, often changing it just enough for it to not be identical.

Trudi Lang works for Halfstitchbitch, a company that provides feminist patches all made by themselves and serves to empower the wearer of the patch.

She has been an artist for as long as she can remember. Having graduated from Glasgow School of Art in 2015 she has spent the last two years building up her online shop.

“It’s lazy, arrogant, unethical fast fashion designers on tight deadlines that steal because they are fully aware that theres nothing you can do about it.”

Trudi says that her work is inspired by things that she enjoyed when she was younger. Artists often just go with what they love and if people like it then they see that as a great thing that they can make a career from.

“I was a punk rock kid, so I guess I’ve always been into band merch since my teens. This was definitely one of the gut instincts when I first started making stuff to sell. It came from a place of just making patches that I liked and would want to wear, and after realising other people liked them too, I pushed everything in that direction.”

Indie artists often get their inspiration from things that they are passionate about, they use it as a driving force to speak up about what they believe in and their art is usually a medium to express their message.

“I am inspired by the Riot grrrl movement and intersectional feminism, so a lot of what I make comes from ideas while discussing these issues with friends. Also, I fucking love swearing. Being from Glasgow in Scotland, it’s a very natural way for me to speak, so this is definitely reflected in the work I do,” Trudi told Artefact.

As the name ‘Halfstitchbitch’ implies, Trudi uses embroidery as her chosen art form. Again, it’s something she loved as a child and I think this a recurring theme with artists in general.

“Embroidery has been a big thing in my life since I was little. I’ve always loved doing cross stitch, and there is something so satisfying about taking a medium like embroidery (historically seen as intricate “women’s work”) and subverting it by using profanities or for communicating political ideas,” she said.

“Every artist eventually finds their calling, I don’t think it’s always intentional, but embroidery was mine.” 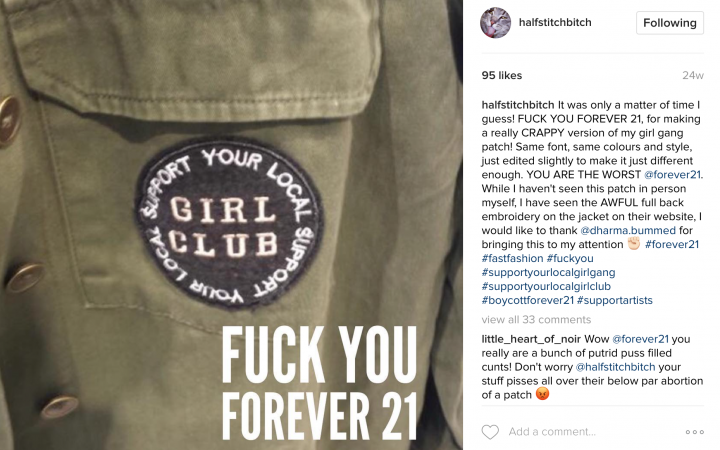 Trudi took to social media to highlight her claim that her work was being ripped off.

Last year, Trudi’s work was allegedly used by Forever 21 on a jacket. This happens to artists every day and there are so many people who have been affected.

A blog, Shop Art Theft run by Adam J. Kurtz, shows artist’s original work alongside the work that has been allegedly stolen by corporate companies and encourages people to buy the original, and is evidence of just how often this appears to happen in the industry.

Adam pleads with the readers: “Once is a mistake. This many times is inexcusable. Global fashion retailer Zara appears to have stolen dozens of artworks from over 20 independent illustrators, designers, and brands. Help us hold the company accountable to directly address this glaring intellectual property infringement and fairly compensate these artists.”

Trudi explains the emotional journey she went on when she discovered that it had happened to her.

“It’s a real weird clusterfuck of emotions to be honest. First of all, you are really angry that someone has stolen from you. In my case, the design was actually changed JUST enough to make it different, but if you were to put them side by side then you could see that it was an absolute rip off,” she said.

“But then you go through lots of other thought processes, from feeling like maybe you should be flattered that you’ve made something worthy of a big brand stealing, and then instantly hating yourself for even thinking that for a second, because it isn’t flattery, it’s lazy, arrogant, unethical fast fashion designers on tight deadlines that steal because they are fully aware that there’s nothing you can do about it.”

“So you feel used. You are frustrated that something you’ve put so much time and effort into making is so quickly taken away from you, and credit is then given to some big arsehole that you’ll never even get the chance to take to court because trying to do so would financially destroy you.”

“So you eventually have to just accept it. And that’s the saddest part, knowing that there is absolutely fuck all you can do about it, and chances are it will happen again.”

“My patch in question says “support your local girl gang”, a phrase used a lot in feminist art, patches, t-shirts. The issue is not with the phrase being used, it was with the design being copied. It was my best-selling patch at the time, and although it was a VERY simple design, there was still a lot of thought, consideration and art school training that was behind that design, but then how do we measure that?” she asked.

“I have seen brands like Forever 21 and Zara produce EXACT copies of small artists work, and then, I also, from time to time, see similar merchandise being made by two small artists. Not copied from either person, but just similar because of similar influences. How do we stop the obvious ripping off of small brands by massive corporations, but also protect small artists making work that might be similar to another person purely by luck? I really don’t know,” she said. 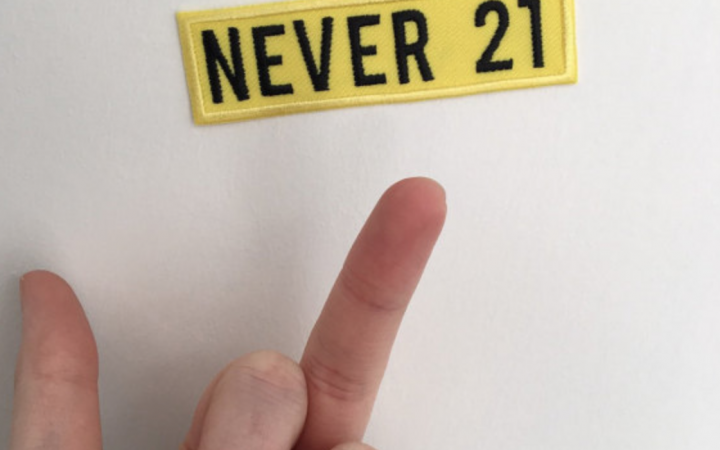 “I feel like it’s a moral issue, but it’s happening so much right now that someone needs to step up and really do something. If there was some kind of way to copyright designs that is accessible to people with not a lot of money, that could help when companies copy, but is that a realistic idea? I really don’t know enough about how legislation works unfortunately,” Trudi told Artefact.

“I decided not to speak to Forever 21 about it. I had spoken to other people who had gone through similar things and they had such bad experiences with it I thought just ‘fuck it and move on’. I had so much support from people on my social media, personally messaging me to tell me how shitty they were and that they were boycotting them, it was enough for me to move on.”

“I guess my only retaliation was that I made a “Never 21” patch that sold really quite well, so fuck ’em. It’s not about money. I don’t think it’s about trying to get money from them for a lot of artists. It’s about what is right and what is wrong. But in these instances, big companies are making millions from wrong doing the small artists, and it’s just bullying.”

There are ways that an artist can copyright their work, but these come at a big expense. Independent artists all over the world have this happen to them, and some of the time they never find out. Sometimes it is just because of people that follow their social media noticing and that’s when they are told that someone has stolen their art.

“It’s harmful in so many ways. It takes the money away from small artists and lines the pockets of rich white men. It’s also such an emotional blow that it really affects your work. You start to question things that you make, wondering if there’s any point when someone can just come along and steal the idea,” Trudi said.

“When Forever 21 copied mine the version they produced was AWFUL, and I considered pulling mine from my site because I didn’t want to be associated with them, but you can’t let them win. The way things work right now sends the message to people that if you have a lot of money then you can do whatever you want, it’s the way so many people’s minds are wired because of the capitalist society that we live in, and that’s pretty harmful for everyone.”

If you wish to support the independent artists, please check out this website where there are many ways you can help to raise awareness.