Once upon a time in Britain

Whether we like or not, it seems that Brexit is going to happen, but not before April 2019 as the Supreme Court decided not to veto the referendum result, therefore Article 50 will proceed very soon and everything is slowly about to change for many European citizens living in Britain.

This is what European citizens will have to go through after April 2019, if they want to carry on living in the UK; in a country that gave the opportunity for over two million European nationals to live and thrive in this picturesque island.

Everything might come to an end if you don’t get your papers done in the right time and you might not get a second chance if you make a mistake.

Until the very last minute, many believed that Brexit wouldn’t happen and that the Supreme Court would veto Article 50 and that we would continue to live happily ever after in Britain as EU nationals with no visa requirements. This is not the case.

Thanks to the 1992 Treaty of Maastricht, more than two million European citizens, mainly from Poland, Ireland, Romania, Spain, Italy and France, moved to the UK in the hopes of finding an “America” close to their homelands.

A dream shared by many, that changed the lives of millions in just 20 years of open borders in the EU.

The European Union drastically transformed London, from a grey city to a multi-cultural, colourful and hopeful city. 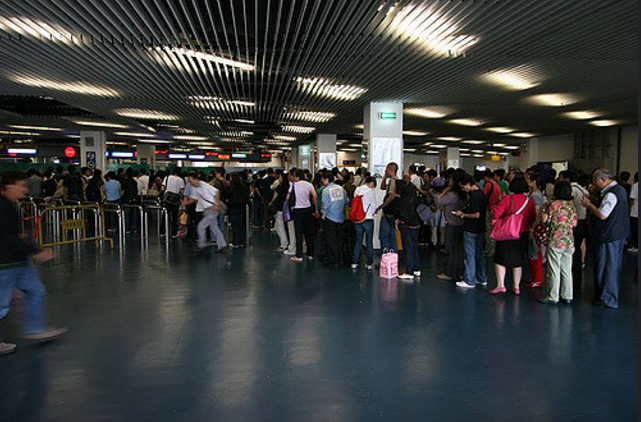 Thousands of people are first generation Britons, proving to the world that actually an Italian, a French and German, historical enemies, can live together and share common values.

A city and a country full of opportunities, a meritocratic system that changed the lives of so many, including myself.

I arrived at the age of 16 from Italy with poor English skills, one suitcase and was immediately thrown into a British boarding school that would allow me access to university and the teaching to improve my opportunities and those of my family.

Being born and raised in the fascinating city of Milan and then settling in England by myself, I have witnessed with my own eyes and formed my own not-so-humble opinion under two point of views — the European and British one.

I remember like it was yesterday, my mother being so busy trying to explain to other Italian mothers how the system worked in order for them to send their children to study in Britain.

They asked her about the costs, future opportunities and if it has been easy for me to leave my household at only 16 all by myself.

Almost all of my childhood friends now all live in England as it became a sort of a ‘fashion trend’ to say, “I live in London,” knowing you would arouse so much jealousy among your peers who are still in Italy.

An opportunity that was more of a ‘trend’ but also a ‘social change’ that led millions of Europeans to settle in the United Kingdom, as the EU gave us all the chance to live and thrive here.

Europeans have revamped London and Britain itself into a country full of different languages, just like they did America in the 1920s.

Everything might come to an end in April 2019 or, at the very least, there will be a significant change to the immigration system. After that, it won’t be so easy for European parents to send their children to study here in Britain.

Artefact wanted to remember all those European nationals who came here with high hopes and dreams for themselves and for their families; who settled here and changed their future.

Lives that history books won’t remember, as their contributions are not viewed as important as the Ellis Island immigrants were, for instance.

[pullquote align=”right”]Britain has always been known for its openness and multi-culturalism [/pullquote]But these stories are still worthy of being written about and told to the world, as they are slowly but intensively shaping the reality of a country.

In only 20 years, European immigrants have changed the face of the country, from a bigger to a smaller scale —transforming the shape of entire cities and areas around the UK.

For instance, the elegant district of South Kensington, now known as “Little Europe,” an area where 80 per cent of its residents are from France or Italy living happily alongside their British neighbours.

People changed the face of the neighbourhood, opening Italian and French cafes, stores, restaurants and local attractions for the community.

From the South West to the East, Europeans have reshaped London. Walking around Shoreditch, Hoxton or Columbia Road, you can hear a melting-pot of languages from all over the continent such as Russian, Polish, French and Spanish.

The fear among many young and old EU citizens of not meeting the criteria to have “permanent residency” has led to the question that is on the minds’ of everyone: “What will happen to me in 2019?”

Will they have to leave if they can’t get residency by 2019? That is a question that Theresa May’s cabinet haven’t answered yet.

Sooner or later, many will have to pack their belongings and go back home or emigrate to another country, after many years of investing here in Britain.

According to statistics collected by Artefact on “Where will you go if you have to leave the UK after 2019?”, 20 per cent of the interviewees responded that they have already gained the “permanent residency,” therefore, they don’t have to leave nor worry about what will happen after April 2019, as they have been living here for over five years.

Around 40 per cent are planning to go back to their native countries and bring what they have learned here to develop their homes, therefore, they are using Brexit as an opportunity to help their homeland.

[pullquote align=”right”]But these stories are still worthy of being written about and told to the world[/pullquote]More worryingly, the remaining 40 per cent of the interviewees responded that they can’t go back home as there’s no opportunity for them there, nor can they stay here so they don’t know where Brexit will take them.

Among those who don’t know where to go, Artefact wanted to understand which countries or cities are attracting the Europeans citizens of the UK.

Around 20 per cent are planning to move to Germany, which always attracts people all over the world for their great job opportunities and lifestyle conditions but they aren’t certain they would fit in German society due to its historical past.

On the other hand, the rest of those who took part in this study, the other 20 per cent, are more attracted by European cities such as Barcelona (two per cent), Dublin (five per cent), Milan (six per cent) and Paris (seven per cent).

Sasha Devour, 25, came to the UK from France to work as an architect intern in London – she managed to find a job two months after she moved here, and works at an independent firm of architects in Acton Town.

“I moved here in 2013 and to be honest finding a job in London was extremely easy as the demand is super high of talented European graduates in the UK.”

After one year of interning, getting paid £9 an hour, the company offered her an indefinite contract as an architect assistant: “During my interning period, I managed to both work in the recruitment section of the company and as a real architect.”

“I have noticed a radical change after June 2016 in the policies of employing EU citizens,” she told us.

“The company now is leading to employ more UK nationals, as it is a real risk for them to have an European employee as the company won’t know for sure what could happen to them after 2019, when the UK will officially leave the European Union. It’s mainly a bureaucratic issue for us.”

The main issue for any company in the UK, at the moment, is that employing somebody with a temporary contract after April 2019, is that if the worker hasn’t been offered an indefinite contract, he/she may have to leave the work place, as visa requirements might be needed in order to stay and work legally in Britain.

A bureaucratic procedure that most of the European nationals will not want to face as it would be an incredible loss of time and money.

Moving here six years ago, allows me to have permanent residency in the UK, therefore, in a year’s time I might be allowed to receive a British Passport.

But I’m an exception, as most of the young and talented EU nationals have been here only for two years. Soon they are going to face a reality that will shock them. 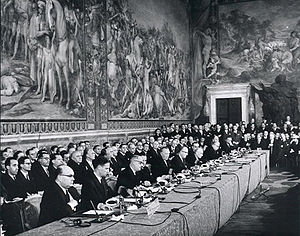 Treaty of Rome being signed in 1957

The UK is the first country in the history of the European Union to plan to leave since its creation which goes back to the Treaty of Rome in 1957.

An agreement signed by the six founding nations (France, Italy, Luxembourg, West Germany, the Netherlands and Belgium) in order to maintain peace in the continent, sharing common values, free trade of goods and free movement of people in the hope of realising Winston Churchill’s dream of “The United States of Europe.”

Whether this Union has been good or bad for European people (including British citizens) isn’t relevant; the point is that we have been living in peace for over 70 consecutive years — the longest period of peace in European history.

The UK might have now caused a ‘Domino effect’, influencing other European super-powers to propose their own ‘exits’, due to radical populist ideologies, such as those in France, Denmark and Italy.

This country was first changed thanks to the mass migration of all those coming from former British colonies and in the last 20 years, then by European immigration.

Britain has always been known for its openness and multi-culturalism and to be honest, Brexit is the biggest step backwards this country could have ever made.

What will happen to over two million European nationals living in the UK isn’t certain yet, it isn’t even certain that, in the future all these people will be remembered, even though they managed to contribute and develop British society; giving the best they could for the greater good of the society that changed the lives of so many.