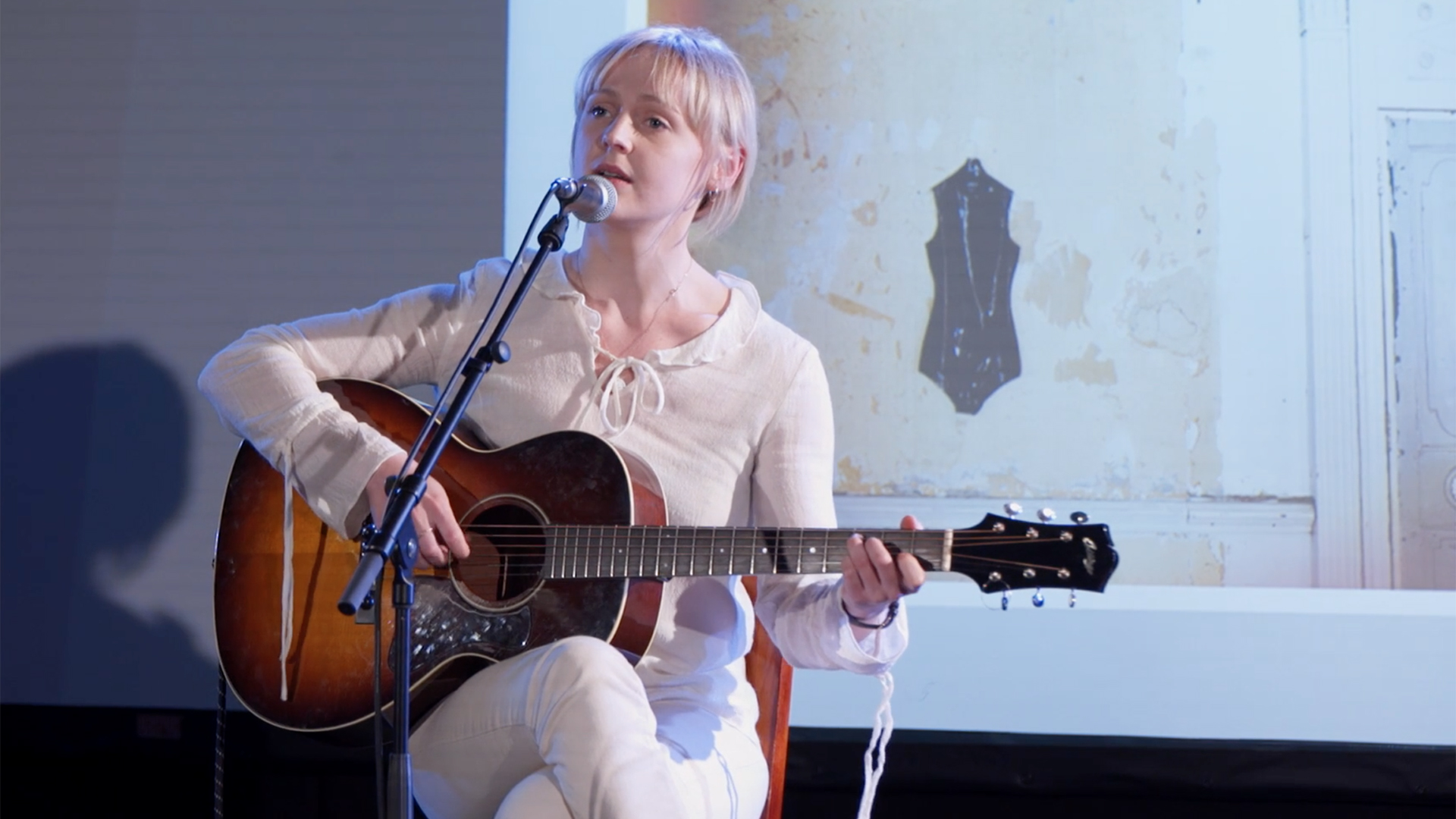 It’s February 13 and after a slight panic as to whether or not this Southern train is actually stopping at New Cross, I find myself sitting in Goldsmiths University’s student union bar awaiting the beginning of the press conference for Laura Marling’s sixth studio album Semper Femina.

Surrounded by fellow students, to which the event is exclusive, I eye up the bar and war with myself over the purchase of a drink.

A woman across the room from me is taking sips from a glass of red and a group of art students sip from bottles of beer as they smoke on the terrace.

Thinking that the conference will take place in this intimate setting, I reason that I can grab a beverage at any point as I marvel at the strong feminine turnout dispersed, though not equally, with young male journalists.

All of us are on our phones or chatting in small groups about Marling and the injustice of her not having already been awarded a Mercury Prize, despite being nominated for the award in 2008, 2010 and 2013.

We are ushered into an auditorium where a stage awaits us and we wait for Laura Marling, surrounded by signs that remind us that we are not permitted to record or take photos.

Soothing, the first track on the new LP plays as the last seats are taken. A twangy bass line accompanies the main hook, with the rhythmic snare of the drums in the background.

The music wraps itself around Marling’s sensual vocals and ever more velvety tones as the chorus ensues. Walking bass fingers push you through the song whilst the sound of strings literally soothes the listener.

Marling will be touring the album with a full band, so her audiences are given the full experience. 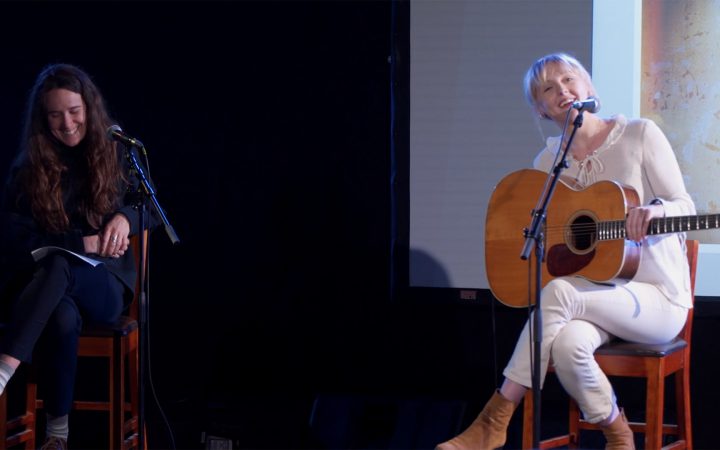 Marling (r) performs and answers question about her forthcoming album Semper Femina, alongside Jen Long of BBC Radio One

Jen Long, of BBC Radio One, joyfully oversees this afternoon’s affair and introduces the artist to the stage.

Laura emerges, dressed almost entirely in angelic white and opens with Wild Fire, the third track on the album.

The seemingly effortless talent behind her voice hides in the way she performs, looking almost deadpan straight ahead whilst the music just flows from her fingertips. Is she aware of this? How does she still manage to convey so much emotion? Is it the strength of emotion behind the lyrics that envelops her in the creation and makes it seem as if it’s just herself and the guitar?

Hearing the track live and subsequent listens makes the hairs on my arms stand up, as if my body were syncing the engagement with what is going on in my brain – a mental connection with the lyrics, complimented by an elegant backing track.

A great feature of Laura’s songs, especially on this album, is that she always seems to throw in swear words where they are least expected.

People have this image of her as a dainty blonde and sweet folk singer, something she likes to contradict about herself and is aiming to achieve through the entirety of this album, a beautiful and probing insight into womanhood, by a woman, for women.

In fact, the album Semper Femina draws its name from a sort of ‘two fingers up’ at what may be perceived as a derogatory jibe found in a poem by Virgil. The Latin epic The Aeneid features the line “Varium et mutabile semper femina” which translates to “Fickle and changeable, always a woman.”

Laura eschewed the fickle and changeable leaving “always a woman” – a phrase which she had tattooed on her at the age of 21.

Semper Femina originally began life as a record written about the image of women from the perspective of men. Laura soon changed this after realising that she could reclaim power and also had permission to write about women from a woman’s point of view in all aspects.

By default, the album is also about herself: “We’re somewhat accustomed to seeing women through men’s eyes, naturally it was my inclination to try and take some power over that, but I very quickly realised that the powerful thing to do was to look at women through a woman’s eyes. It was a little stumble at the beginning of the record, a self conscious stumble – but yes that’s where that came from.”

Listening to an album about women, sexuality, and the constructed gender of them written from a woman’s point of view is extremely powerful, especially since it is so rare. 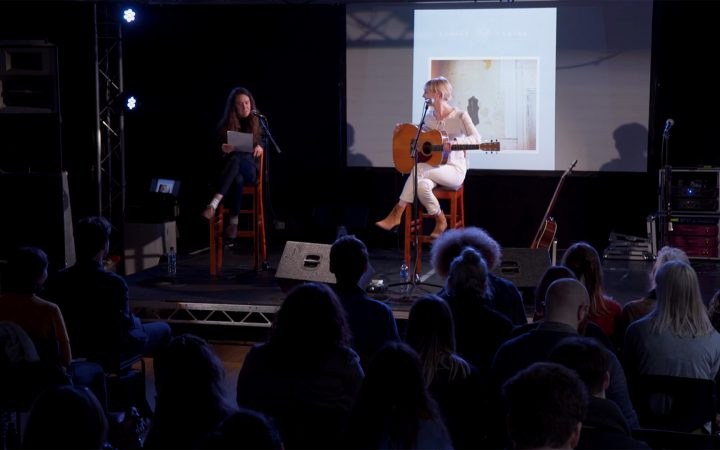 Much of Marling’s back catalogue is packed with songs that tell stories or indeed whole albums around one tale she wanted to tell. Some inspiration of which she has gleaned from literary fiction and poetry.

“I used to read a lot of fiction and I don’t any more, but I read a lot poetry. So Gothic Romantic literature used to play quite a big part in my vocabulary of emotional experience. Now that I have my own emotional experiences, I like drawing on them and delving into poetry more, as well as literary and fictional/fantasy,” she tells the conference.

Citing Rainer Maria Rilke as her favourite poet she tells us that he was dressed as a girl until the age of eight, which in turn had “a profound effect on his relationship to women”, he went on to become “somewhat of an obsessive woman-fancier” but it was his “misguided perception of felinity” that led her to investigate notions of gender and womanhood further.

The record hosts a few ruminating ballads such as ‘The Valley’ and ‘Nothing Not Nearly’ reminiscent of Jeff Buckley (listen out around the lyric ‘The only thing I learnt in a year where I didn’t smile once, not really’ for a nod to ‘Lover you should’ve come over’) which speaks of the fragile importance of love, of appreciating it before it leaves you.

The track The Valley smartly reflects with a kind of English nostalgia on broken female relationships and how it feels to be betrayed by or betray female friends. The vocals harmonise and glide over oscillating melodic guitar. They are melancholic yet warm and reflective – perhaps a lesson for women to be kinder to each other in a world that wants so badly to see them pitted against one another.

The sixth track, Wild Once, is a simple and sweet arrangement that celebrates the archetype of the ‘wild woman’. This track is born out of the influence of the book The Women who Run with the Wolves and her experiences of hiking a lot in the United States – the “chasing stones” lyric may come from her experiences “running through a forest by Big Sur with no shoes on”.

In a break from producing with Ethan Johns, who produced her first five albums, Laura describes Semper Femina producer Blake Mills as a “cool cat” with an “incredible tonal palette”.

“Working with Blake all of a sudden was quite a shock to the system because he has a very different way and he is incredibly innovative. He’s not very far in age from me so we kind of met at a similar level which I’ve never experienced. I would go home every night from the studio and practice guitar because I wanted to be as good as him,” Marling said.

Some things in life just come to you, even without the implicit expectation. In a way this was the case for Marling. Semper Femina came to her whilst touring America in 2015 and whilst she was working on her podcast Reversal of the Muse (ROTM) which looks at women in the music industry and gender equality.

This project definitely fed into the making of her album but as a result has inadvertently led to people asking Laura for firm answers to questions surrounding feminism.

The album itself is not meant to be an all-answering and encompassing solution to the problems of inequality. Instead it probes and addresses the artistic and powerful side to women, reclaiming  a space where they are patriarchally seen as passive, frail and submissive. 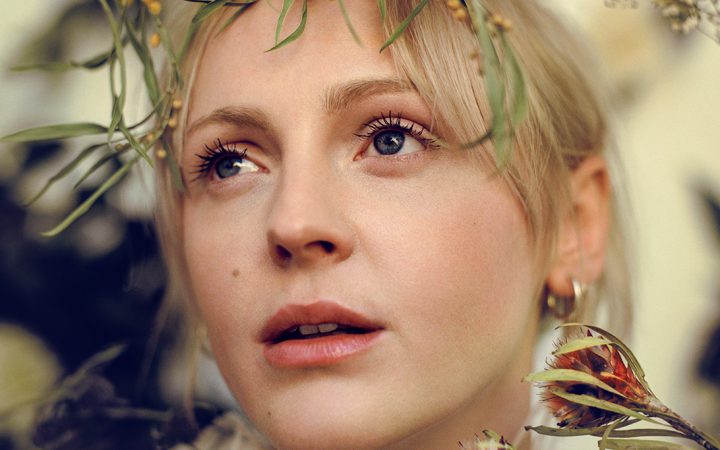 Laura Marling is refreshing in her acknowledgement that we all stand to learn more. In fact, she wants to continue her ROTM project, for the purpose of further educating herself and others. She especially wants to talk to women in the TV, film and entertainment industries because “these are the mediums by which we understand the world we live in”.

Besides the spellbinding performances Laura gave us, one of her most insightful remarks comes in response to America’s influence on the production and writing of Semper Femina.

“I love America and find America very infuriating for the same reason. I love them because they give a lot of value to artists and everyone is an artists and that’s quite nice if you’ve devoted your career, inadvertently in my case, to being an artist. And it makes you feel good about yourself. But it also gives a very strange over the top reverence to people who have lived very self indulgent lives and demand to be called artists.”

This conflicting love-hate relationship is symbolic of her “own inner tussle”, an unrelenting one in which she ponders whether her creativity “is an indulgence or is it a compulsion.”

America enabled her to create a feeling that “without self-criticism that I should be doing something more important, or more useful rather.”

In a 2013 interview with The Telegraph Marling described herself as a “solitary person” albeit still a people lover. She feels closest to people through shared experience and states that: “I like the idea of speaking only when it’s strictly necessary.”

Fast forward five years and she has produced a wholly necessary album and one that contains the shared experiences of many.

So where is she headed next?