In conversation with | Martin Serene 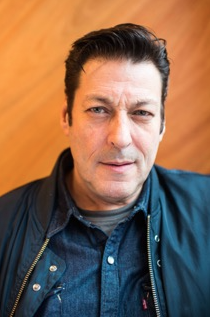 With a career in Hollywood spanning more than three decades, Martin Serene, 61, has many big budget films under his belt having worked with the likes of Scarlet Johansson, Brad Pitt and Morgan Freeman.

He has also worked as an assistant director which means he has experienced the worlds both in front of and behind the camera.

His first part as an actor was playing a character named Eddie in the 1984 movie, Supergirl. The film starred Helen Slater, an actress who has starred in numerous daytime TV shows, along with Faye Dunaway and Peter O’Toole.

“Mind you, I started late. I got the job when I was 28. I loved film and acting but I just never knew how to get into it,” Serene admitted.

However he feels that trying to make it in show business was more difficult than it is for today’s actors: “There weren’t agencies holding classes like they do now and we didn’t have the internet or mobile phones, you had to get into any crack to find a chance of acting but it’s still difficult for actors today. Very few jobs and too many actors”

Although he expressed how tough it is to break through, he revealed how being in the music business before acting helped him a lot.

“I worked as part of Paul Young’s management team, touring with him around the world. He was number one back in the day but he was one of my best mates, still is.”

Whilst he was working with Paul Young, one of the backing singers named Kim Leslie became his girlfriend, and her best friend was one of the youngest stuntwomen in the UK who doubled for Princess Leia in Star Wars: Episode VI Return of the Jedi. She also doubled for Helen Slater in Supergirl.

“I worked as part of Paul Young’s management team, touring with him around the world. He was number one back in the day but he was one of my best mates, still is.”

“Tracy came round to mine and Kim’s flat with this American girl behind her who was only 19. It was Helen Slater. Supergirl was her first role after graduating the Juilliard school and she didn’t know anyone so she was nervous. First-job jitters and all.”

They started hanging out frequently that they naturally got to know each other. Eventually, Helen told Serene that he should pursue a career in acting because she thought he was talented, but he confessed that he didn’t believe her until he met her in the backlot for the movie.

“The whole area was built like a midwestern town and it was amazing because I’ve never been to a film set. There were cameras everywhere, trailers, the full works. On the way there we bumped into Helen who happened to be talking to the producer Timothy Burrill and we got to talking. At the end of the day, Helen told me how Tim liked me and wanted me to go see the casting director. I got the job”

The critical reception that Supergirl received wasn’t the best with 4.3/10 rating from IMDB.

Arguably the role that Martin is best known for is playing Wild Bill for critically acclaimed, Oscar-winning thriller, Se7en.

Released in 1995, starring Morgan Freeman and Brad Pitt as two cops who try to track down a highly intelligent psychopathic killer who is murdering people who represent the seven deadly sins.

Serene told us that the way he got the role as Wild Bill was peculiar. “I was living in Hollywood at the time as an assistant director and saw a close friend of mine who was David Finch’s assistant at a party. She introduced me to a casting director, Billy Hopkins, and we got to talking.”

Billy Hopkins told Serene that he was casting for Se7en and asked if he wanted to audition for the role.

Serene thought he wouldn’t get it because it was a big-budget movie but went to the audition anyway. He was surprised at what he got himself into. “I was looking around the waiting room and I realised that I was the only white guy in the room so I thought there must’ve been some mistake.”

To his surprise, he quickly realised that Wild Bill was meant to be a Nigerian man.

“When you walk through those audition doors, the directors and whatever will all be sat there and will judge you before you even open your mouth.”

“I spoke to Billy about it afterwards. I was like ‘You do realise I’m white?’ And he laughed ‘I know but I just thought you’d be a good fit for the role’; I thought that he wasted my time.”

Two weeks later, Serene was notified that he got the job. He describes that moment as a “massive lesson”.

“When you walk through those audition doors, the directors and whatever will all be sat there and will judge you before you even open your mouth. They’ll instantly make a decision. What I learnt was that you can always change someone’s mind.”

While working for the movie, Serene said that there were some great times. He recalls his best moment in acting was during the scenes he filmed with Pitt and Freeman; and he remembers the fun he had outside the sets.

“At the time, I was married to an American woman so I could stay in America; my green card wife. She told me: ‘You better fucking take me to the premiere’. I didn’t want to go with her so I said I’d take her to the wrap party at the Hollywood Athletic Club.”

He said that his wife was very keen to be introduced to Brad Pitt and Morgan Freeman. “This was going on for half an hour then all of a sudden Morgan appeared out of nowhere.”

He said Morgan had overheard the conversation that he was having with his wife and decided to distract her with his charms in order to help Serene relax.

“He was a great guy throughout me knowing him and I remember at the end of the wrap party, I went to him and said it was an honour to be working with him and hoped that we work together in another movie in the future. He said that he was sure that we would. It was amazing.”

As he explained more about the work ethic he received from his family, and how he incorporated those values into his acting.

“I think acting is a profession, art and a lifestyle. I think for me, personally, it’s an art form and a lifestyle. The word ‘profession’ doesn’t do it for me because it doesn’t feel like a job. I love what I do but it definitely is hard work.”

He emphasised that acting takes a lot of work, that you can’t just sit around hoping for your chance to come. You need to get out there every day if you really want to be an actor. Go to acting classes, expand your contacts because if you don’t sell yourself, then who will?

Martin Serene is a unique actor who has been in the business for more than 30 years – he’s gone from British films to Hollywood and back. He’s worked with the greatest of actors but has still stayed true to who he is and where he came from.

Currently, Martin is creating workshops to help young actors with the ins and outs of the business. He is also in collaboration with Plan B to prepare for the artist’s big comeback.

He gave us snippet of what’s to come and while we’re sworn to secrecy, we promise you won’t be disappointed.