These are just a few of the words I’ve encountered when expressing to female peers that I use sanitary towels as opposed to tampons.

While I’ve found myself surrounded by more women who are willing to discuss their periods, a shift from the complete silence on the subject experienced as a teenager, I’ve also found myself more exposed to criticism over my sanitary product of choice.

After a recent encounter in which I was shamed for speaking up about my use of pads (“You don’t honestly still use those do you? That is disgusting”) I took to the internet to find out if I was on my own in this condemnation.

Speaking to hundreds of women via Twitter, Instagram, Facebook and women’s forums it turns out I’m by no means the first to experience stigma for using pads, with menstrual cups and reusable pads also coming up tops for women-on-women objection.

The use of sanitary products that involve intimate interaction between woman and menstrual fluid seems to be a taboo within a taboo.

Why is it that there is such a stigma about getting involved with our menstrual blood?

How did we get to this point that in Western culture we have a problem with getting hands-on with our periods, let alone to the point in which women have begun criticising other women for their preferred method of menstrual care?

Throughout history we have come to view menstruation as the ultimate form of uncleanliness in women.

Centuries of misinterpretation about periods and their meaning have manifested as a modern day culture of stigmatisation.

In one of the first ever encyclopaedias of natural history (approx 77-79 AD) Roman naturalist Pliny the Elder wrote about the effect a period has on a woman: “Contact with the monthly flux of women turns new wine sour, makes crops wither, kills grafts, dries seeds in gardens, causes the fruit of trees to fall off, dims the bright surface of mirrors, dulls the edge of steel and the gleam of ivory, kills bees, rusts iron and bronze, and causes a horrible smell to fill the air. Dogs who taste the blood become mad, and their bite becomes poisonous as in rabies.” 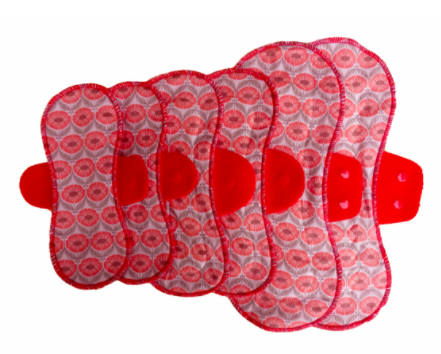 Makers of reusable pads, such as Vicky Sherrard of Honour Your Flow, are championing openness when it comes to talking about menstruation.

Pliny the Elder may sound ridiculous now, as you sit reading this in the 21st century, but in some shape or another for centuries menstruation has been seen as unclean.

Speaking to Vicky Sherrard, owner of Honour Your Flow, a company dedicated to designing and producing reusable menstrual products, it seems that the shaping of societal views over periods by male-dominated cultures throughout the centuries has evolved into a type of cultural training and conditioning.

“Play it out for two thousand years and you get young women and girls thinking everything to do with their period is ‘gross’ and ‘ew’, and the thought of using cloth pads or menstrual cups feels utterly intolerable to them,” says Sherrard.

“For example I receive loads of comments to this effect whenever we advertise on social media.

“Girls want something which they can use without touching themselves and which they can get rid of as quick as possible,” referring to applicator tampons.

She adds, “They have entirely lost touch with their blood, never mind the rest of their menstrual cycle.

“The last thing they want is to be reminded of it by having to wash pads or get blood on their hands. This would lend acceptance and legitimacy to the blood, which is not an option.”

It would seem as though history has already set us up for a fall when it comes menstruation, but what about now?

If I were to turn on my TV, what could I learn about how I should be handling my period, seeing as transparency around my use of pads seems to be a no-no. As with almost everything, the media seems to play a role.

“If any liquid is shown adverts it is usually blue: who would want to see icky red stuff, it might make you realise that they’re talking about blood!”

In lieu of any significant conversations about menstruation outside of sex ed, media representation of periods is particularly instrumental in shaping opinion.

It is therefore especially disappointing that if we look at the how sanitary products are advertised, branded and publicised there’s an obvious implication that there is something wrong with menstruation, exacerbating this already existing issue.

The word ‘period’ wasn’t even mentioned in an advert for sanitary products until 1985.

Before Courteney Cox boldly claimed “there’s a feeling with Tampax, it can actually change the way you feel about your period” donning spandex with lunging dancers in the background, menstrual product advertising was strewn with euphemisms for women’s ‘time of the month’, their ‘gift from mother nature’ and their ‘monthly visitor.’

Even with the first mention of the word period in an ad, there’s still stigma.

Once more pads are criticised for being unclean. One step forward for mentioning periods, two steps back for menstruation being treated as normal.

Even now Tampax Compak offer “protection and discretion”, proudly boasting that the tampons “colourful wraps open easily and quietly for discretion”, because god forbid another woman may hear you dealing with your period, heck, they might even be trying to silently deal with theirs too.

By implying that periods should be kept hush, companies like Tampax are promoting a sense of undetected confidentiality about a fundamental function of a woman’s body.

Today 3D generated images of pads and tampons pop up on TV and in magazines, as though the real thing were too offensive to publish. 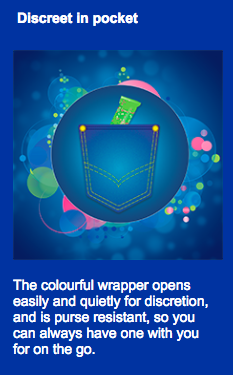 Blue liquid leaks onto them, a strange clinical sanitisation of one of the most natural processes a body goes through.

Words and phrases such as ‘secret’, ‘shhh’, ‘whisper’ and ‘no one will ever know’ litter sanitary product advertising, emphasising concealment.

When it comes to advertising for reusable feminine products, there is next to none beyond word of mouth.

Christine McRitchie, the director of Earthwise Girls, a reusable menstrual product and natural toiletries supplier, describes to Artefact the issues that the marketing of disposable sanitary products provide.

“When I advertise my products on social media there’s usually a few women who will pop up with very strongly worded comments, suggesting that it is a return to the dark ages, it’s disgusting, it’s gross, it’s primitive etc.

“I’m sure the idea of being unclean is also partly due to the way that disposable pads and tampons are advertised, usually with the aid of a cheerful young slim twenty something who is happily dancing around in her white shorts (because everyone does that on their period, right?).

“Tampons and pads come individually wrapped and are usually white, presenting an image of being sterile (note that is just an image, they are not actually sterile). If any liquid is shown in the advert it is usually blue: who would want to see icky red stuff, it might make you realise that they’re talking about blood!”

Naturally the sanitising of periods has leaked into social media as the digital generation have taken over.

Instagram will openly allow sexually suggestive images to be published, but under its guidelines writer and artist Rupi Kaur’s image of a woman experiencing a leak on her period was offensive enough to be taken down. Twice.

Is it any wonder that we’ve arrived at a situation where women are reluctant to get hands on with their periods and that there are now some who feel that feminine products that put you face to face with your menstrual blood are abhorrent?

In my experience of high school sex education the boys were asked to exit the room whilst the girls were spoken to about periods, instilling secretiveness about our monthly bleeding from the get go.

Our teacher asked if anyone would like to admit to already having started theirs and I almost raised my hand before noticing the smirking looks passing from one girl to the next.

No chance. No one was getting to know that I had started. Boys peeked in through the small window on the door, laughing and pointing at us examining the classic high-school-nurse’s-office-duvet-thick sanitary towels that we were now passing around.

No one was getting to know that I used these. It was to be kept secret. It was embarrassing.

If this culture of shame is shaping how girls see their period then it is more important than ever to intercept this at an education level.

Through the inclusion of boys in these period sex ed talks, to simply teaching girls that THIS IS OKAY, hopefully some of the ingrained notion of embarrassment that so many of us are taught can be erased.

The desire for sustainability has also driven an increase in the use of reusable products.

Bristol company Co-exist are planning to create a ‘period policy’ so women can take time off if they are in pain from menstruation without stigma.

Musician Kiran Gandhi made the headlines when she had her period while running the 2015 London Marathon.

It’s clear menstrual awareness is increasing, but we’ve got a long way to go.

This sanitary product stigma and the taboo of talking about periods is just the tiny tip of an iceberg of an immense global problem.

We are still in the midst of a universal culture of period shaming. In Britain homeless women are having to use rags instead of pads as the government continues to see sanitary products as ‘luxury items’ whilst giving out condoms for free.

In America, Viagra and Rogaine are given tax-exemption but tampons and pads are not.

According to UNICEF, 48% of girls in Iran believe menstruation is a disease.

In Nepal some women and girls are still banished to sheds when they are on their period. According to the World Health Organisation we live in a world where 500 million girls do not have adequate facilities in which to deal with their period.

For something that happens to almost half the world’s population, menstruation is one of the most ignored human rights issues.

Shaming women into not talking about periods is a way of upholding a system that sees women as less.

This menstrual censorship that we impose on girls from the get go has got to stop. By unapologetically talking about periods we can destroy the notion that female biology is a form of weakness.