Don’t tell me that we don’t need feminism

To the men who tell me that we don’t need feminism anymore:

You are criticising feminism, which is to criticise equality. In doing so you are assuming that equality between the genders is in place. Feminism is about equality, feminism is about creating an equal playing field and whether you like it or not, that includes you just as much as it does me.

According to research carried out by Amnesty, a third of people believe women who flirt are partially responsible for being raped. In England and Wales approximately 85,000 women are raped every single year, and that’s just an estimate because an overwhelming amount go unreported.

More than 120 countries don’t have laws against marital rape. In developing world countries the gender gap is still very real, with some women not being allowed to leave their houses if they’re on their period. Abortion is a criminal offence in Northern Ireland.

We have a president in the USA who claims a woman’s role is to be ‘grabbed by the pussy’, and that’s no alternative fact. Female genital mutilation continues to occur across the world to control women’s sexuality and enhance pleasure for men. According to the UN it is estimated that a third of women will experience physical violence from a partner.

Do not tell me that feminism has outlived its usefulness.

Women around the world are incredibly marginalised hence the need for feminism and there is nothing more telling that feminism is needed than by being told that we don’t.

By claiming that we don’t need feminism you are actively ignoring the fact that we need non-heteronormative intersectional feminism now more than ever: to acknowledge the exclusion of women of colour from mainstream feminism, to recognise that the murders of trans women go largely unreported and that they are continually marginalised by governments and society alike, that sex workers are often downright excluded from a feminist narrative.

We need a united and welcoming feminist movement. Our rights are not guaranteed until they are guaranteed for all. If your activism for equality doesn’t include all women, who are you really fighting for? 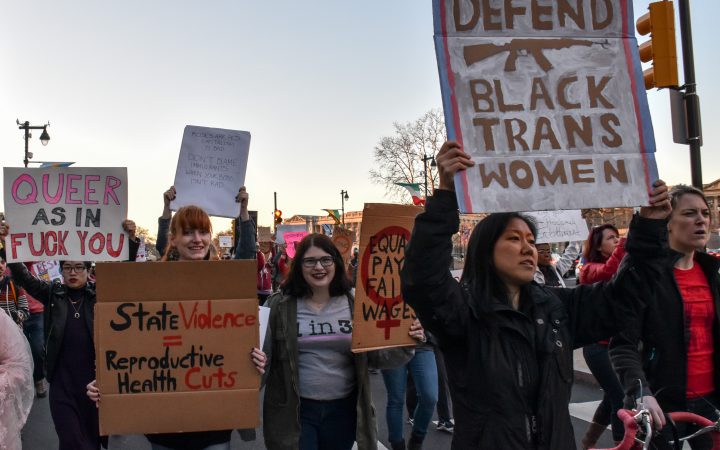 And men, yeah you guys don’t have it easy either. Your biggest killer in middle age is suicide because society teaches you to not talk about emotions. Toxic masculinity created by society means that 60,000 fewer boys will go to university than women.

Look at crime stats: they are overwhelmingly male. Men are taught to be strong and hard to the point that it’s often hard to define positive masculinity.

Girls should be taught that male objectification is wrong (although it is nowhere near as threatening as the objectification of other genders through a male gaze) and in the same way men should be taught more in depth about periods, childbirth, and that feminism is not a form of anti-menism. These are all issues that feminism is fighting to eradicate, we’re not just fighting for ourselves, we’re fighting for you too.

And you’re right, if we lived in opposite land and the sexualisation of men, the sexual harassment of men, the cat calling, the wolf whistling, the embarrassment as you just try to make it down the street without being shouted at was as high as what it is for women was in the case of men, I would be with you.

I would call it out as sexist, as I do when topless men are used to sell, when I worked in karaoke bar and hen parties would harass my male members of staff, when films like Magic Mike come out and women flock to ogle. I would support you, because I’m a feminist.

And you know what? I’m sure that as a man there’s probably been encounters in some shape or form that critique your life in relation to gender.

The fact still stands that women do face more discrimination and it is up to men to be just as big feminists as us. Stick up for us, support us and that meaning ALL OF US and call out the misogyny that the other men in your life may espouse.

Saying feminism isn’t needed because you’re not the one being oppressed is like saying hunger doesn’t exist because you’ve already had breakfast.

I don’t need feminism to make me feel strong, I’m already strong. I need feminism because of the way the world perceives my strength.