It was day two of a short four-day trip to Greece at the end of January 2017. The sun rose but did not stay long. A foggy forecast settled in for the rest of the week. After I had breakfast with the team of volunteers in the warehouse, I walked around the Ritsona camp, where approximately seven hundred refugees live. The population is mainly from Syria, although there are some from Iraq and Afghanistan.

Bikes were ringing with giggles, and screams in Kurdish reclaiming the football “Derbas, derbas”, which means “pass, pass”, took me back to my childhood in Seville. Summers spent with friends, laughing and biking around the main plaza.

Shouts brought my attention back to the present: “The Syrian Neymar” had scored again. A boy reporting the football game screamed, as if letting the whole camp know the score of the Ritsona camp World Cup finals: Kurdistan vs Syria.

While all his team ran to him, jumping and hugging together, Ferhad made his casual scoring dance, inspired by the infamous Culé duet of football superstars Neymar and Alves. Although happy for helping his team, Syria, win, he felt Kurdish, and dreamt of Canada while living in Greece.

This distanced him from everyone else, despite the popularity he had gained from his zig-zag football moves and being the barber of the camp; little did he know that he was not the only one who was feeling lost in the camp. But the fear in his soul left him unable to talk about it; his state of anxiety for the future and repression from the past had been converted into kindness, deeply reflected in his eyes.

Although he had been in Ritsona camp for four months, everyone knew Ferhad and none of them hesitated to speak of him as a treasured figure. “Every morning he came to the warehouse, where we worked and organised the day, and offered his help in anything and everything,” one volunteer said. 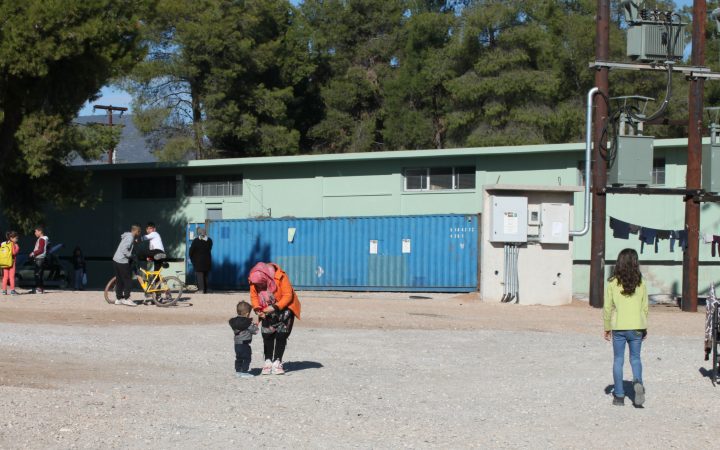 “He sometimes helped us organising the food, in the clothes distribution and even as translator between volunteers and the residents of the camp,” she said, adding, “There is not one day that Ferhad didn’t leave us with a whole-day-lasting smile and empowering messages.”

When he finished celebrating his winning goal, leading his team to victory, his eyes found mine. Leaving the team celebrating with their paper-made cup, to be reused for future tournaments, he ran towards me with opened arms and a timid smile.

He grabbed his blue sweatshirt, the same every teenager wore in the camp, and covered his UNHCR #getactive white t-shirt which came from UNHCR’s NGO donation. His well-earned sweat must have clashed with the cold wind, and he shivered. “I heard you were coming back!” he shrieked.

He recognised me from the previous December, when I was volunteering with Echo100plus, a small Austrian NGO. He fidgeted with his hands while updating me on his life in the camp. “I tried again, with a different fake passport. They caught me this time. I was taken out by airport security. I feared I was done.” He looked straight at the pebbly floor. I couldn’t help but notice how much his English had improved.

The 18-year-old “Syrian Neymar” was born and raised in Amuda, in north-east Syria, the seventh of eight siblings, twin of his only sister, who was the youngest of them all. “Sherin was born only one minute later than me,” he said, “She is my sister and my best friend. We went to school together, we had the same friends, I always protected her from the other children,” he added with a nostalgic glance.

“I left Syria three years ago and moved to Kurdistan with my uncle, Ahmed. He took me in as a son. From the first moment I felt welcome in his house,” Ferhad paused and touched his neck. “I will always be grateful to him. He saved my life by accepting me in his house, with open arms, and inspired me to always look forward in life, whatever the situation.”

Although his family was spread across four countries, Ferhad didn’t lose hope. “God blessed me and my family with an opportunity not many have. I recognise my privilege, I’m in the minority of people that could flee on time”.

Casually the day before, his school friend in Amuda, told him that Ahmad had been killed. He was the one who had pushed Ferhad every day to work hard and make his parents proud. “He was there for me when my father fell ill. He cared for his students the way he cared for his children.”

When I met Ferhad in December he didn’t hesitate to invite me to his humble “Isobox”, where he lived with his uncle, aunt, cousin and the wife of his other cousin (who was currently in Germany) and her little baby. The Isoboxes are waterproof structures which can accommodate up to six people, and have electricity, ventilation and bunk beds. 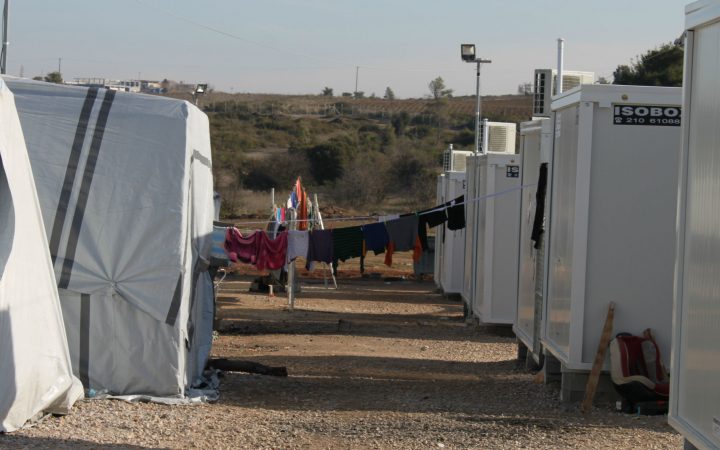 Ferhad asked me to go to his caravan, which is what the residents usually call the boxes to give them a sense of home. We walked in silence and let the wind break it. He shivered again. I rubbed my hands on his shoulders to calm his trembles. He stepped away with a timid smile, not wanting to offend me by being uncomfortable with my spontaneous affection. I remember we come from different cultures and blush.

I slipped my shoes off before I went in and caught sight of the decorations that made his house unique. I now understood why they used the word ‘caravan’ instead of ‘isobox’. It somehow brought warmth and appreciation to what they called home.

Inside, his pregnant aunt, Mahabad, was waiting for him with freshly brewed tea and greeted me with a cup. She added three teaspoons of sugar to it when I accepted. “Sipas” or “thank you” in Kurdish, I timidly said. It still surprised to me how selfless everyone was. Even though I prefer my tea bitter, I couldn’t help but feel gratitude for her sharing her weekly-rationed sugar with me.

“Please sit down, put yourself comfy,” Ferhad said. We sat down making a small circle, I realised that they have a big old fashion TV, his caravan looked cosy and familiar.

After drinking my first sip of tea, I noticed his urge to talk to me “I was on Facebook when I realised I had to leave Kurdistan as soon as possible.” He reached down his pocket to find his phone. “I knew things were bad, but we didn’t get enough news as to know how the war was evolving.”

That day, he talked about leaving Iraq to his uncle over rice for dinner. “I felt the need of being in Europe. Like if someone sent me a message,” he nervously laughed, embarrassed. “My uncle didn’t hesitate to agree with my plan. Three days later, we had paid our initial 3000 euros to our guide. Well, that’s what we call them. Maybe to deny the gravity of the situation.”

He explained how the Syrian Mafia was making an excessive amount of profit out of the war, and even mentions how they might be involved in it too. But he stopped talking about it fast after his uncle came in and said a few words in Kurdish, making Ferhad lower his head and look down at his feet with his hands behind him. “Please, have some more tea,” he offered. I accepted a second time, but I held the sugar tea-spoon to dish it out myself to avoid using up their limited supply.

His uncle started explaining that there was no time to rest. They hadn’t slept for two nights when someone knocked their door. “It’s time.” The smuggler said to them. “We knew what to do, they had told us the plan some days before. We just had to wait for the signal.” Ferhad added, “I remember those seconds perfectly. My heart started racing. I thought they could see it beat through my t-shirt, and crossed my arms to hide it.”

They had a small backpack each, packed only with essentials. No space for clothes or toiletries. He could hardly fit in a sandwich and a small water bottle. The family of six had to walk across the Turkish border with Greece with twenty other people. It was so dark they couldn’t even see where they were walking. He didn’t want to use his phone’s light to avoid wasting the battery.

“The cold temperature made the way even harder,” Ferhad said. Mahabad told me how she kept stumbling on stones or stepping on the fallen leaves autumn had left behind and the guides shushed her over and over. It was a still night, with no wind to cover noises, she explained. “I still remember his words: ‘Don’t make noise! Even the mice can hear your breath’.”

Ferhad interrupted her: “We had walked the most dangerous part. Again, I thought the guides would hear my heart rush through my t-shirt and thought about what they just said to my aunt. Once we crossed the border, we were relieved.” But that wouldn’t last long. The Turkish patrols were walking around the area. They hid for a few hours until they were gone. 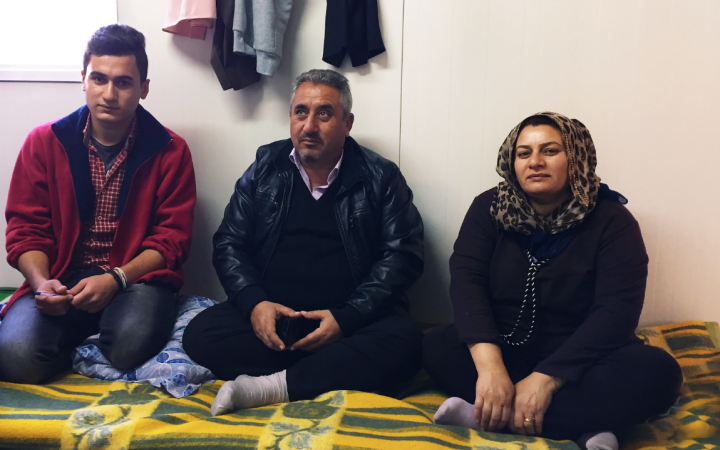 Ferhad, Ahmed and Mahabad in their caravan

Once they arrived in Greek territory the situation wasn’t as good as they had expected. “We were sleeping in a sports-centre for at least three nights with approximately 100 people sleeping shoulder to shoulder,” Ferhad explained.

“It was after four days that we received the documentation naming us ‘refugees of war’, which we had to hang around our neck with a thin, white string. We were assigned to Ritsona camp,” Ahmed told me. They thought this would be temporary: “We arrived last October and our asylum appointment is on middle June,” Ferhad said, with frustration.

I felt an overwhelming heat rise through my body. I could not hold my emotion any longer. My hands started to shake and my mouth dried. Mahabad saw me and filled a plastic cup of water for me. She stroked my hand when she handed me it and shared a smile to comfort me. I felt embarrassed, I was the one who should be comforting them.

I had been at Ferhad’s caravan for almost an hour, a very intense time. I had to go back to the warehouse, the volunteers would be missing me. I decided to stand up, and all of them did the same. Ferhad gazed at me timidly “Can I have your Facebook?” I gladly gave it to him.

Three days later, I woke up to a loud noise. Someone was knocking on the door of my London flat.  My scheduled grocery shopping had arrived. Still tired because of the last night’s trip from the camp, I hurried down the stairs and opened the door to pick up the food for the next two weeks.

While I was unpacking the groceries and trying to organise the pantry and fridge, I took the packet of sugar and thought of the sugary teas I had taken the previous days. In the same Sainsbury bag, I found the box of milk, and the first thing that came to my mind is how precious it was.

A loud sigh came out from the deepest part of me. Although I was at home, my mind was in Ritsona.

By Will Drysdale
8 Mins read
We spoke to MP Sir Roger Gale about the humanitarian crisis unfolding in Europe, and a new scheme to host Ukrainian refugees.
AudioEnvironment

By Anmy Pazos Martinez
1 Mins read
We talk to the co-founders of Conceivable Futures: a network encouraging people to actively participate in climate action and its intersection with reproductive rights.