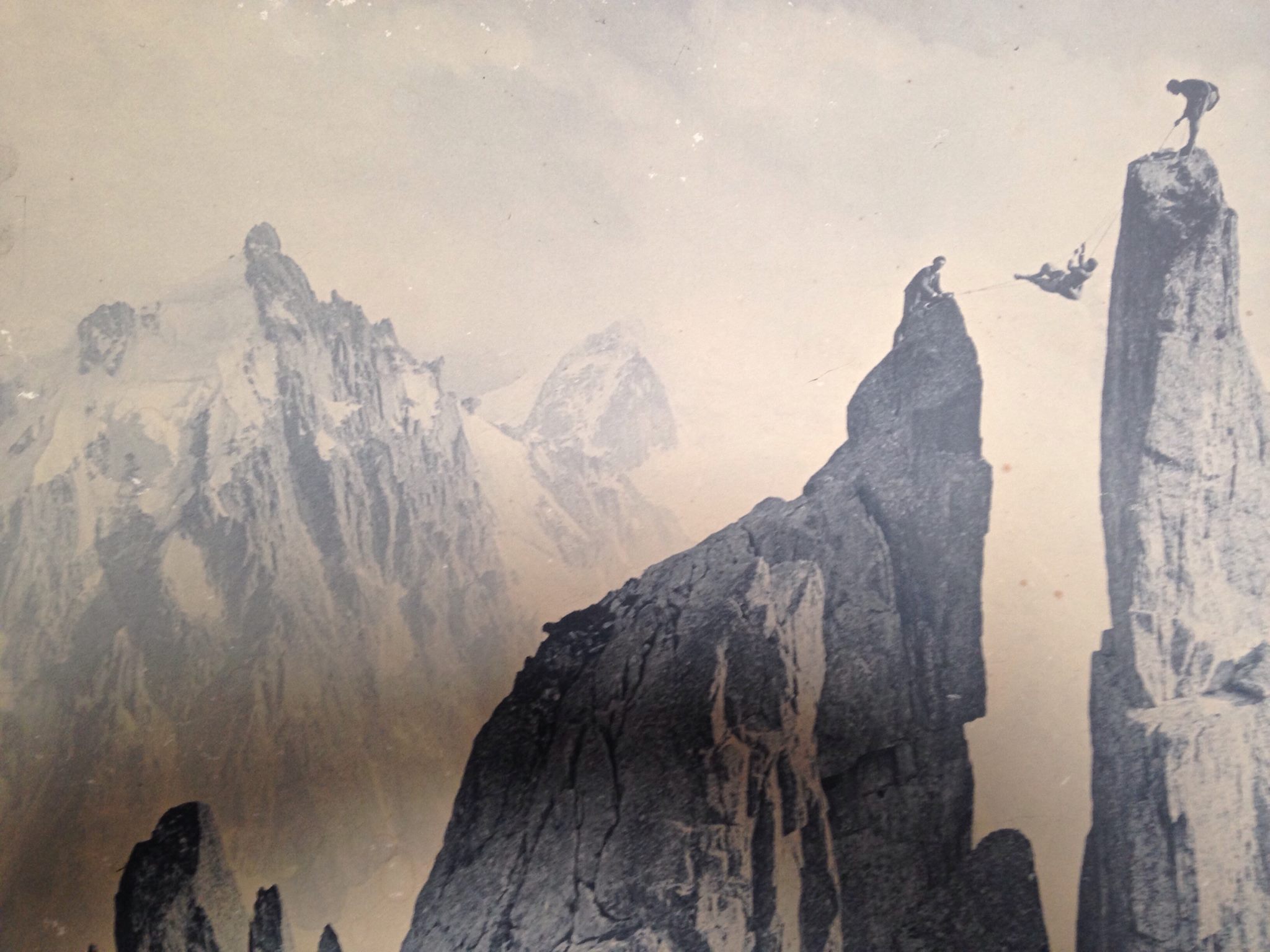 No, it is not a dance, it is what a community of mountain guides have to do for living.

Not only does the guide of nature have to take his client safely to the top of the mountains and down, but also make the time enjoyable for their clients.

There is a place in the Haute Savoie region of the French Alps where local highlanders unified and decided to change their survival skills into a touristic profession 150 years ago.

The profession of mountain guiding has existed since the beginning of the 19th century.

By this year, the initiative had evolved into a fully legitimate profession with special certificates gained from universities. It has evolved in the manner it is practised. However, the question remains: will further evolution come with climate change?

A group of chamois (a type of mountain goat-hunter), who spent their time on looking for food supplies on high altitude, started to use their knowledge to show mountaineering enthusiasts how to get around on the steep terrain. 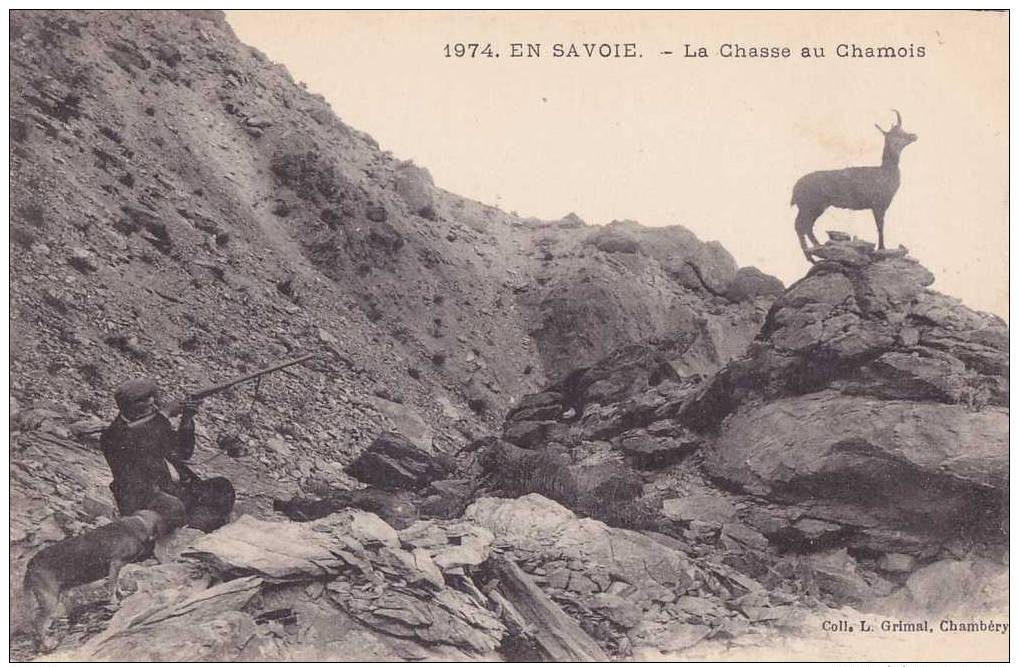 Postcard from the second half of the 20th century. [Image: Via Delcampe]

Back in these days, tracking a pray on high altitudes was challenging. Just when you think you have almost got it, suddenly it spooks and disappears into the glacier, snow and rocks. It could take days to find a new footprint of the animal.

“This is where the tiredness of the hunter begins,” said the chairman of the Medical Society of Geneva in 1818, Andre Matthey. “Taken by the passion [for hunting], he does not know danger anymore; he goes into the glacier without fear of what is underneath, he goes into the most difficult of routes without thinking of the way back.”

With only a quarter of dry baguette and a finger piece of Beaufort (local cheese) left you go to sleep. Not under a tree like you normally would but under a sky full of stars, or if lucky enough, a cosy cave.

When the animal was finally caught, after maybe seven days of loneliness surrounded only by needle like summits, you go back to the village where you feed your family and dry meat to sell it later on.

Today, the life of a guide could be compared to the one of a life long athlete. Some are able to climb Mont Blanc sometimes more than 30 times a season.

Mont Blanc, Europe’s tallest mountain, was firstly ascended by Jacque Balmat and Michel Paccard in 1786 after dozens of attempts; it is now scaled more then 20,000 times a year. 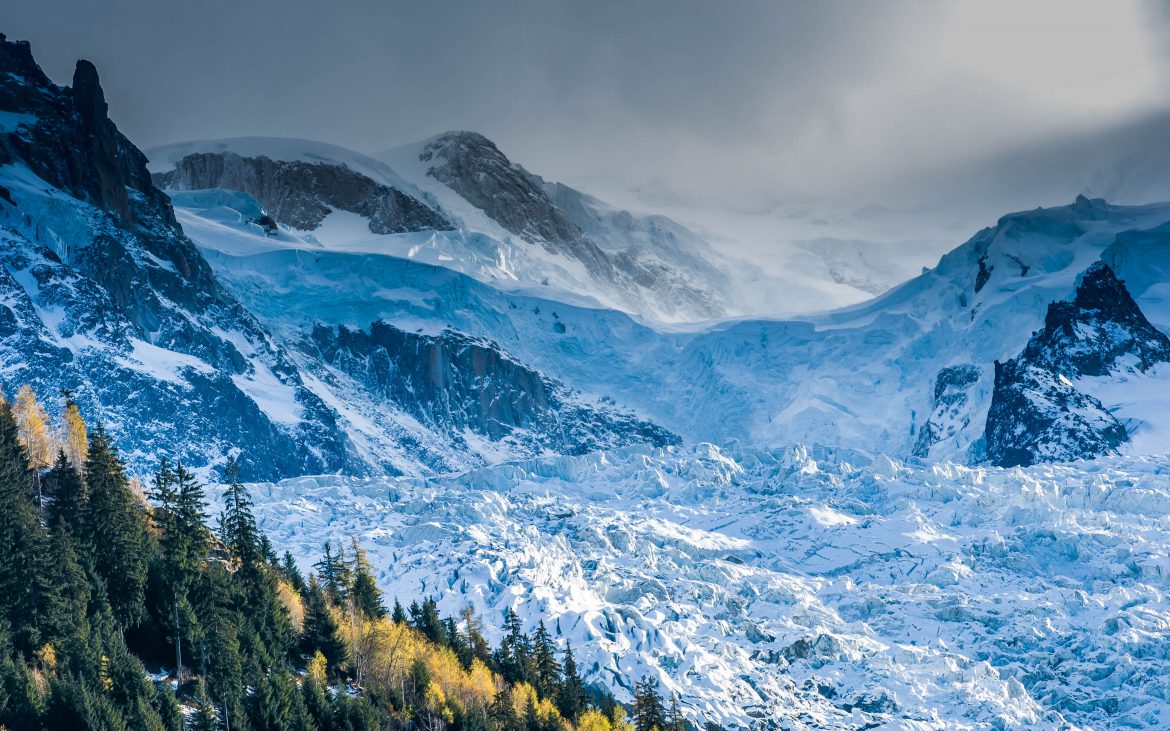 Guides are educated to deal with all sorts of situations. Let’s take an average person, who works eight hours a day in Canary Wharf who has never been in the mountains before, except maybe taking part in an annual ski trip.

There are many reasons that push people to the extremes of mountaineering.

One of them could be an inspirational Hollywood production. Another, maybe a relationship break up, where a challenging mountain could become a good cure to pain. Or simply an engaging passion, which drives people to experience the unforgettable.

All a person has to do is call a guiding company in town, rent the necessary stuff and here we go – usually, it is in an ‘I pay, you take me to the summit’ relationship. But after a while the power of athletic emotions and adrenaline turns people into friends and rope companions.

The money aspect is still present, but loose in its importance. In essence, a guide’s job is to take an unprepared person, after an evaluation, to places where you would not even think of.

Needless to say, the profession exposes you to a lot of risks. According to the French mountain guide’s trade union (Syndicat National des Guides de Montagne) report, between 2003-2013, 286 major accidents have taken place, from which around 70 were casualties.

Accidents can occur for many reasons. For instance, when a guide skis off a designated track, he or she can be exposed to avalanches or seracs (spikes of ice). Or when climbing with a client, they can be exposed to falls and other dangers. 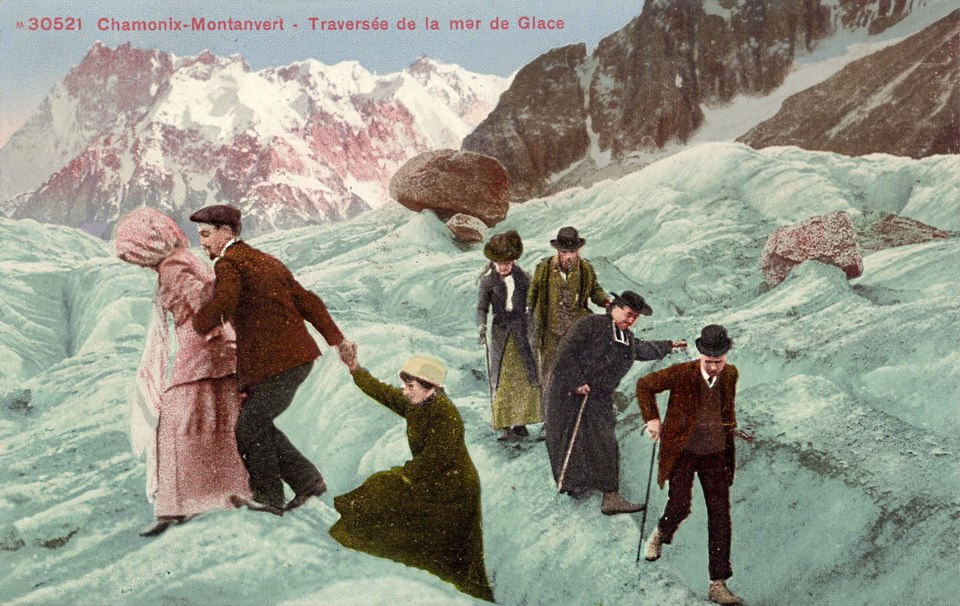 It is estimated that up to 50 per cent of mountain guides have suffered some form of physical effects after accidents and 22 per cent have had to reduce their working time as a result, meaning lower incomes for them and their families.

Artefact had an opportunity to talk with the president of the ”Syndicat National des Guides de Haute Montagne”, Christian Jacquier, a guide who started mountaineering in his teens, to talk about the risks and environmental issues related to mountain guiding.

Christian told Artefact: “I knew the risks before going into the guiding school, I don’t like taking them though. I would rather master it making sure it is under control. Money would never influence the way I behave in the mountains.”

When asked how a guide makes his clients comfortable in dangerous situations he replied: “You need to do a briefing first, explaining potential dangers to your clients. You need to Explain the decisions and make sure they aren’t too stressed. Adapt your objectives if needed.”

Sports linked to mountaineering have evolved over the last 40 years. Not only in terms of equipment, but also in the way climbing or skiing is exercised.

“The know-how, technics and the equipment are in a constant evolution. That is why so many academic researches are taking places and students have to learn continuously,” Christian told us. 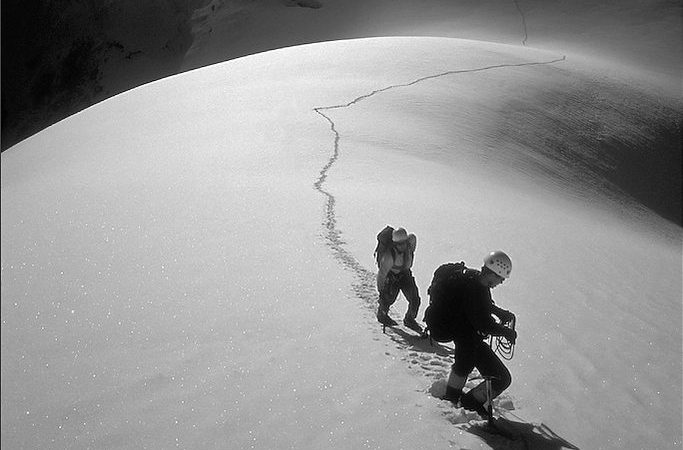 The invention of nylon ropes, which are safer to use than the natural fibre ones. The transition from wooden carabiners to metallic, sun and snow glare protection, the invention of new clothing with systems such as GoreTex, sleeping gear with modernised tents and sleeping bags, avalanche beacons, portable stoves and Lyophilised food and many more.

All of this has contributed to the evolution of mountain exploring, but most importantly to safety.

Today, safety has jumped to the next level. The invention of helicopters allows rescue teams to reach an area in less than 15 minutes.

In order to become a guide in France, you have to be a graduate of what is essentially the Oxbridge of climbing schools, ”École Nationale de Ski et d’Alpinisme” founded in 1949 and located in the Mecca of European mountain sports: Chamonix.

In other countries, such as Poland, guides are examined by an independent body led by the IFGA.

Today, mountain guides in France are either members of local offices and communities, such as the two oldest guides association in the world; ”Compagne de Guides Saint Gervais – Les Contamines‘‘ (1864) and ”Compagne de Guides de Chamonix” (1821) or they work as freelancers.

Regardless of their status, they have to be members of the ‘’International Federation of Mountain Guides Association’’, which acts a regulating body of all guides around the world.

Among others, it determines the level of mandatory training schemes, fights for environmental causes and supports the emerging and smaller local offices.

Prior to being accepted to ENSA, you have to pass a complex ten days entry exam. 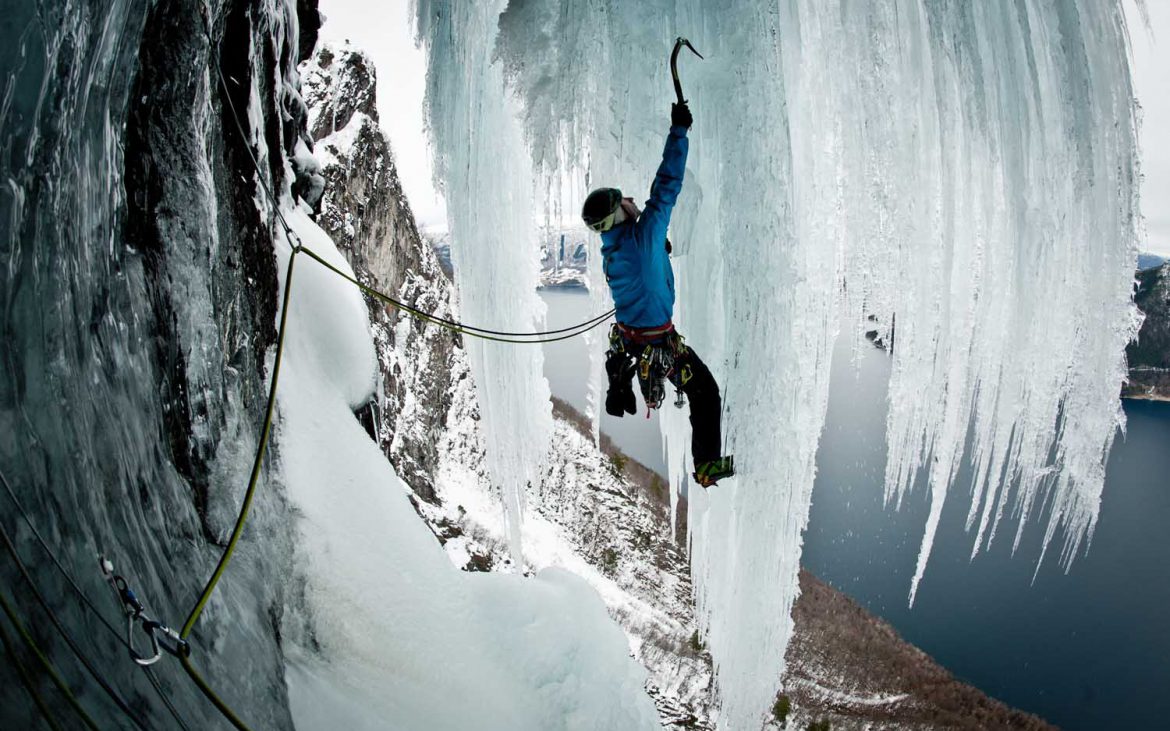 Safety is paramount on the mountains [GORE-TEX® Products via Flickr]

If this was not enough, the applicant has to show a list of around 39 mountain excursions done before the application process can officially begin. The mountaineers are questioned by the jury, on specific places they climbed, to make sure they are not making it up.

Questions such as, where exactly did you have lunch when climbing that ridge three years ago are a normality. You have to know it by heart. 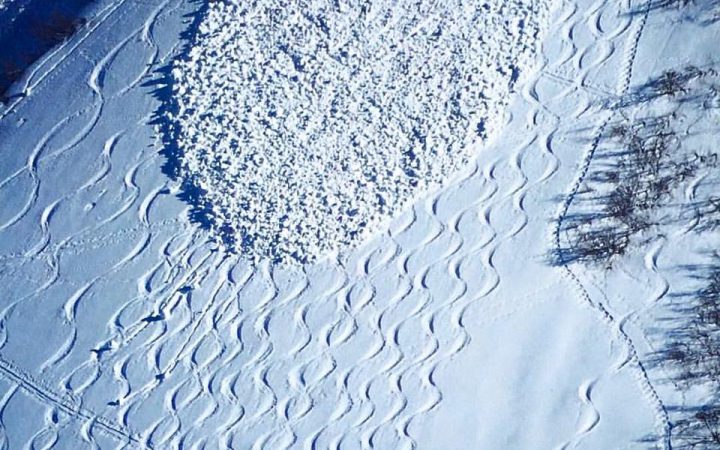 An avalanche in what skiers thought was a safe place. [Sport Safety via Facebook]

The main feature of a guide is to be versatile athletically and mentally. The school is planning to add an extra type of examination to the qualification, based on pedagogical skills. A guide is not only an athlete, but also a teacher who helps pupils overcome obstacles.

A big part of the job is to learn how to be approachable and patient with individuals who have never experienced the mountains.

“What did they teach me? Everything,” said the author Michel Serres in the book Les Enfants du Mont Blanc. “Guides are at first pedagogues, whose model and words change your soul forever.”

Becoming a guide is a life decision, it is not a bachelor that you could finish in three years, it is something that you have to dedicate your life to. Not only for the school part, which usually takes around 70 months, but in a majority for the life experience you get afterwards.

For instance, you learn the subject of nivology (the study of snow) for a long period of time, but to use this knowledge on real slopes is much different.

This notion of experience over safety is well represented in the report below, stating that most of the accidents appeared to be after eight to twelve years after graduation. 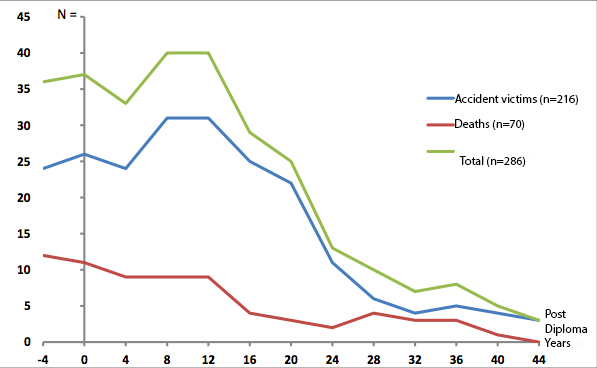 Graph showing time after the graduation of mountain guides compared to the number of accidents in years between 2003-2013. The graph has a clear trend after 12 years of experience, supporting the argument that experience is key to safety. [Source: Romain Ferlay, C´ecile Radiguet de La Bastaie. 2015. ]

The obvious duty of a guide is to know the terrain where one works. Often it take ages to memorise each slope and corner of the mountain range.

Guides have to know where avalanches go down and why and if they go down they have to know if it is safe to be there at this time of the day. For example, sometimes it is safer to be on a slope early in the morning rather than in a full sun and the guide has to be sure of that.

Environmental issues also play a part in the life of a guide. Irregular snow precipitations and temperatures, can evolve the holding layers of snow or grass and can act as a slide for the incoming layers, thus resulting in an avalanche.

Like it happened in January 2016 when the snow arrived late. This resulted in a multi-avalanche accidents in the Les Deux Alpes resort which killed two children and in Valfrejus, where five soldiers were killed.

The environmental changes also act as an income imitator for mountain guides and ski resorts. The late snowing this year, starting only in mid-January (compared to other years when it started towards the end of November) reinforces the argument that global warming is changing our planet. 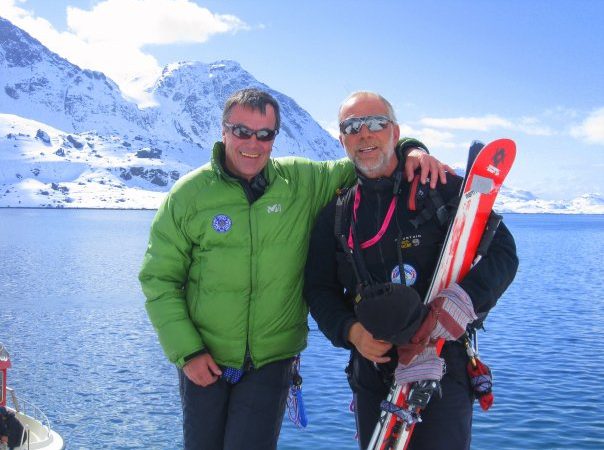 British media including the Daily Mail, The Telegraph, Guardian and The Evening Standard are claiming, based on scientific data, that the lack of snow caused by a rise in temperature, could make many resorts in the Alps, below 2500 metres (8202 feet), unusable within the next 80 years.

Mountain guiding is a two season job, with summers of and winters on. Even though there is no shortage of snow enthusiasts, if one of these seasons is missed, the profession may disappear. Time will show if a strong community of mountain crafters with a history going back more than a century, will survive the crisis of our civilisation.

When Artefact asked if global warming will change the profession of guides, the president replied: “The number of clients increases regularly, so the number of guides will have to increase as well. The climate changes are already perceptible.

“Guides are observing them very carefully, but they also adapt in their practise. The capacity to adapt and the diversification of practises is what define guides.”