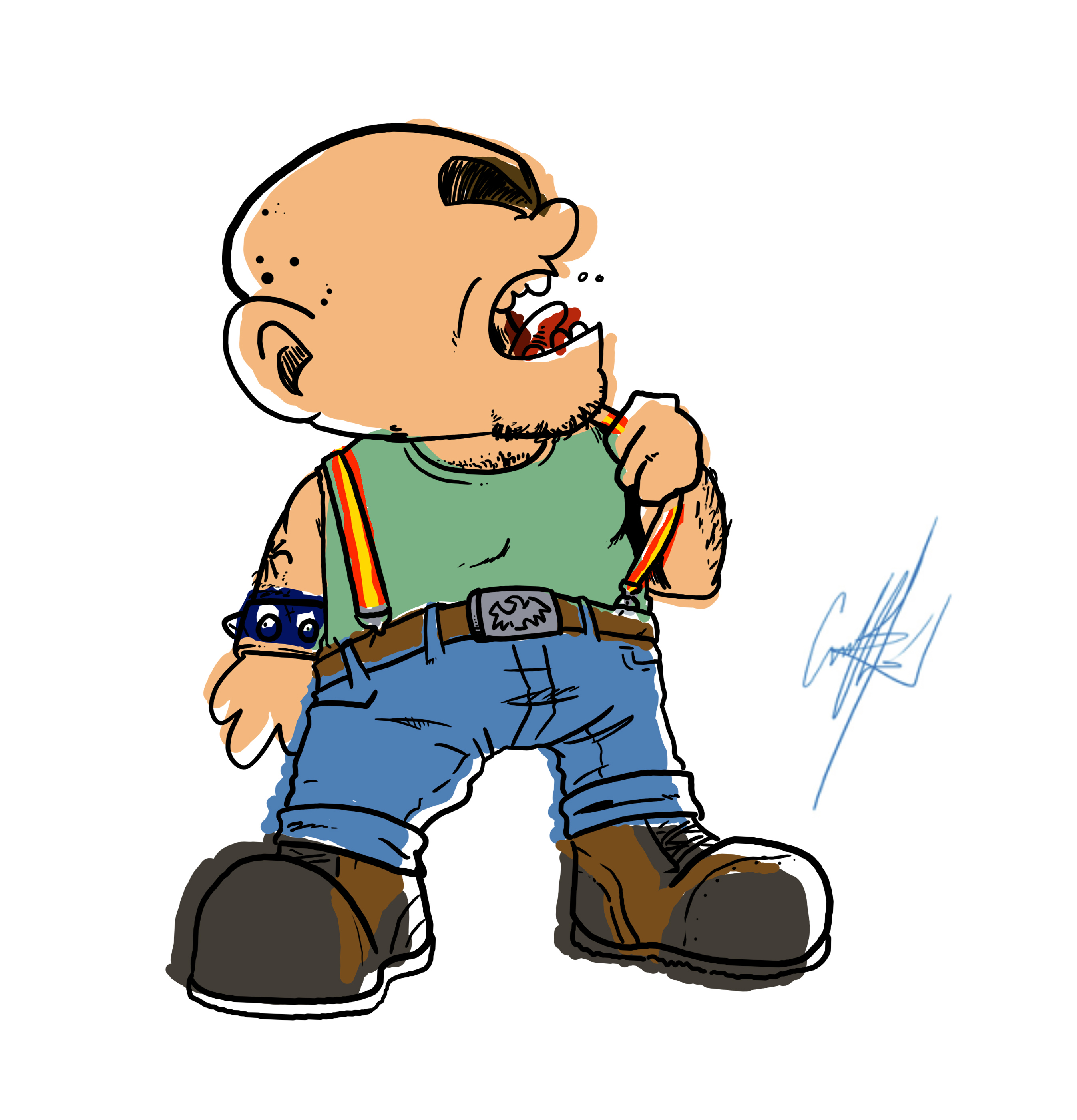 By Pau Castelló and Eduardo Altarriba

In February, the self-proclaimed ultra-Catholic group “Hazte Oír” launched a campaign with a bus emblazoned with the slogan: “Boys have penises, girls have vulvas. Don’t be fooled”. Another message on the bus read: “If you are born a man, you are a man. If you are a woman, you will continue to be one”.

Not surprisingly, the campaign was considered by many to be transphobic and some of the most important Spanish organisations and political parties called for its end because it was perceived as inciting hate towards transsexuals.

Founded in 2001 and led by Ignacio Arsuaga, “Hazte Oír” – which translates as ‘Make Yourself Heard’ – is an organisation with the mission of “building a free, conscious, active and cohesive society, with limited public powers that don’t invade social and public spheres they aren’t allowed to”, as stated on their website. This pressure group presents itself as a defender of life, family, freedom, dignity and fundamental human rights. However, the group’s bus campaign clearly shows the role of the far-right in Spain in a moment when Europe is witnessing the rise of this ideology.

Over the last 10 years, Europe has witnessed a rise of far-right political movements. Politicians making xenophobic, racist, homophobic and nationalist speeches have profited from the uncertainty and suffering caused by Europe’s grave economic crisis and a growing disaffection both with the European project and with traditional political parties. The increasing popularity of these new forces is reflected in the 2014 elections to the European Parliament, where some of them reached historically high results.

In France, the National Front (FN) led by Jean-Marie Le Pen achieved 24.86 per cent of votes, 18.5 per cent more than in the elections of 2009. In Denmark, the growth was also significant. The Danish People Party (DF) went from 14.8 per cent to a 26.6 per cent of the votes. In Austria, The Party for Freedom increased its results more than 5 per cent, and UKIP from United Kingdom got 27.49 per cent of the total votes. All these parties had remarkable improvements in numbers and all of them making xenophobic and anti-immigration statements.

Spain seems to have many of the conditions which have encouraged parties of the far-right. The country is suffering serious consequences of the economic crisis with an unemployment rate of 19 per cent and 28 per cent of the population at risk of poverty. There are more than 4 million immigrants living in the country and there have been a number of high-profile cases of political corruption, leading to the rejection of traditional elites. Spain has seen the growth of new movements such as Podemos, which was founded in 2014 and is now one of the country’s biggest political groups and the centrist Ciudadanos party. However, over this period there was no significant growth of the far-right.

More so than most European countries, Spain has a relatively recent history of far-right wing politics; the country was ruled by military dictator, General Franco from 1939 until 1975. Franco’s ideology was regarded by many as fascism, or at least a form of fascism, and his regime committed many violent human-rights abuses against the Spanish people, which included the use of concentration camps, forced labour and executions. As many as 400,000 people are estimated to have been killed by the Franco regime.

However, since Franco’s death and the democratisation of the country, the far-right has remained marginal and without any representation in the Parliament.

The National Democracy party, which has existed in Spain since 1995, shares and defends the far-right ideology but despite not having any official representation in the Parliament, the party has found a place on social media to share their messages.

Their leaders publicly assert the need to stop what they describe as the Islamisation of Europe: “Foreigners in our country? Spanish people first!”, they state on their Twitter account @D_Nacional. National Democracy defends itself against allegations of extremism by saying: “We aren’t Nazis nor neo-Nazis, we are a Spanish nationalist movement”. The younger members of the party do what they describe as activism work, which involves sticking anti-LGBT posters around the city, and the leader of the National Democracy Youth Faction, Juan de Haro, claims that “The free homosexuality implies the normalization of paedophilia, and the LGBT collective is the dictatorship of degeneration”, as it can be read in various tweets that he posted in his personal Twitter account, @JuanDHaro90.

Nevertheless, all of these ideas are far from the mainstream of Spanish political discourse as none of the groups in the Parliament share their views.

Over the last 10 years, Europe has witnessed a rise of far-right political movements.

The relative weakness of the far-right in Spain may be due to the country’s recent history. During the 1960s, the European far-right evolved, modernised and opposed the processes of decolonisation (for example in Belgium with the Congo in 1960 or France with Algeria in 1962), but this was not the case of Spain. The opposition to decolonisation that received support from the majority of the colonised population “allowed the extreme right to recover the lost legitimacy due to their collaboration with Nazism during the Second World War”, states Xavier Casals, historian and professor at the Ramon Llull University of Barcelona.

After the Algerian war, the French far-right saw the necessity of becoming a political organisation and they founded a party to avoid further defeats. The Jeune Europe was established as a political party with a Pan-European ideology. This new ideology was developed in 1968 around the “Groupement de Recherche et d’Etudes sur la Civilisation Européenne”, and received the support of the intellectual elites. Some years later, in 1972, the National Front was created.

In Belgium things happened differently, but the opposition to decolonisation helped the far-right to achieve a massive approval from population and emerging political parties.

By contrast with what was happening in Europe, decolonisation didn’t produce any significant revolt in Spain. The Spanish far-right “was essentially centred around the ideological axis of 1930: the defence and exaltation of the Catholic religion and of the ideal of Hispanity (Spanish nationalism)”, says Casals. Their inability to modernise and the lack of an attractive discourse during the period of transition, hindered its implantation in society because their vision was anchored in the past.

Casals states that during the transition to democracy in Spain there was a “generalized desire for national reconciliation: over the course of the four-decades-long dictatorship a big consensus about the necessity of reconciliation was developed, so that the wounds of war could be healed. That’s why a speech that constantly appealed to return to the trenches of the Civil War could hardly motivate the accession of a population that wanted to overcome the past and win the future”.

The economic and social changes of the period of “developmentalism” provoked a modernisation of society and back then it didn’t resonate with the ultra-Catholic discourse, which was in favour of a confessional state. The far-right in Spain didn’t offer a solid project and wasn’t capable of forming a political organisation because, as the historian says, they were surprised to “face the process of democratization”.

After Franco’s death, the Spanish far-right was convinced that King Juan Carlos I would continue the dictatorship. However, this never happened, and as a result, New Force, the political party formed by right extremist in 1966 arrived fragmented at the first democratic elections of 1977.

New Force approached the elections with the aim of maintaining the postulates of Franco’s dictatorship. Two years later and as a member of a coalition, New Force received 379,000 votes, which was 2.1 per cent of the total. Following the results, the party got one seat in the Parliament, which went to their leader, Blas Piñar. Nevertheless, disputes appeared among the party members, which, alongside the failure of the coup d’état in February 1981, lead to the dissolution of New Force in 1982.

On the democratic elections of 1982 there were eight political forces presented under the umbrella of far-right, but the lack of union between them sentenced each of them to a washout. In 1986, leader of the failed New Force Blas Piñar, founded a new far-right party – National Front – but just like its younger sister it came to an end a few years after its establishment.

As Xavier Casals explains, various factors contributed to the downfall of the National Front. In the first place: “The incapacity of creating a strong centralised party that unified the extreme right politic families”, secondly, “The decision making was not at all times guided by suitable criteria”, thirdly, “The fact that they neglected logistic and ideological aspects by not creating an electoral program”, and in fourth place, “Even though the National Front had media related to their postulates, journalists wouldn’t support the party on multiple occasions”.

All these factors characterised the far right in Spain from 1975 until its (almost) complete disintegration in 1982. The big beneficiary of this situation was the People’s Alliance, a conservative right-wing party. Still, according to Casals, “The biggest part of the political class that had arisen during the dictatorship didn’t join the extreme right parties but rather the reformist ones, such as Democratic Union Centre”.

In 1989, the People’s Alliance became the People’s Party and since then it has been the hegemonic party, which associates various right-wing ideas and principles.

Nevertheless, there have been some attempts to create far right parties in Spain in the 21st century. For instance, the cases of Vox or Platform for Catalonia, which have racist and xenophobic beliefs. But even though the achieved small representation in some regional elections, the repercussions have always been minor.

National Democracy, as well as other smaller parties, is the paradigm of a group using social media to gain influence incrementally. They are slowly piecing together some of the dissatisfied souls on the internet who have strong Spanish nationalist connections and they are starting to make an impact. But, for the time being, there’s no clear indication of a big change. Xavier Casals, without hesitating, affirms that: “The actual context in Spain does not seem very auspicious for the eruption of a post-industrial extreme right similar to those in Europe, but it could just happen in the medium term”.