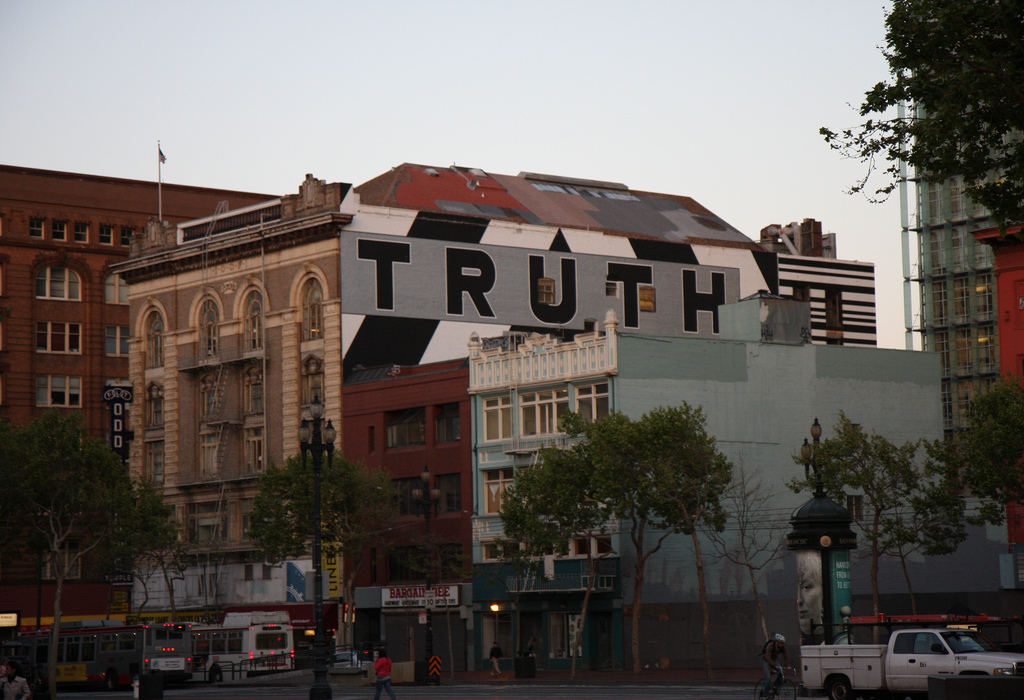 Depending on our geographical location, we live in or watch at the real or mediated wars, armed conflicts, and terror attacks that bring new fatalities every day. The brutality of these events shocks, traumatises and intimidates communities all around the world. At the same time, last year was marked with a declaration of a “post-truth era” that not only brought debates on losing track of what is really happening on the local and global scale but also questioned if truth is still important in our everyday life and political decision-making. In what way are terror and truth connected to each other and how does their relationship characterise the modernity that we live in?

As a notion, terror has two meanings. The first refers to the phenomenon, the second one refers to the feeling. Firstly, terror describes an act or period of frightful violence, which is usually associated with ‘terrorism’. The Slovenian philosopher Slavoj Žižek suggests that in order to critically approach the whole discourse around terror and terrorism, we should consider the difference between, on the one hand, an act of horrible momentary disruption of normal everyday life and order such as a terroristic attack and, on the other, a state of permanent brutality and violence. The latter is a terror which presents, for instance, in such deeply problematised areas as Somalia, Lebanon, Iraq, Syria, and Afghanistan. These are countries whose daily life almost totally lacks modern achievements of our civilisation – human rights and social security. This perspective helps us in the West not only to understand why people are escaping from these unsafe distant areas, but also to join a stream of thinking that sees terror not as attacks against particular countries or cultures and as isolated cases, but rather looks at it on a global scale as an attack against all humanity.

Regardless of the duration, intensity, and target of implemented violence, terror’s aim stays unaltered – to intimidate. The second semantic meaning of terror implies an intense, overmastering and paralysing fear. Fear that is not a spasm or shock of short-duration fright, but rather a fear in the future tense – a fear of the presence or imminence of danger, a fear that causes anxiety and a deep feeling of personal or collective vulnerability and disorientation; a fear that, in fact, leads to the formation of the “society of fear” which, in its turn, shapes the politics of our time – “the post-political biopolitics”. According to Žižek, such ‘politics of fear’ are formulated as a ‘defence against a potential victimisation or harassment’, and introduce measures that increasingly demonstrate how they will insulate people from a ‘flickering threat’. In other words, the new politics introduces policies aimed not at drawing a picture of a happy tomorrow, but at protecting us from the horrors that tomorrow might bring.

While the concept of terror is rather constant, the dominant discourse around it has changed over time. The current research of social theorist and philosopher Brian Massumi is focused on the rise of preemptive politics and theory of affect. He describes how a feeling of ‘looming threat’ and ‘shadow of threat’ is used by contemporary political powers. Massumi suggests that 9/11 was the point when the Bush doctrine (the policies of the 43rd US President George W Bush) changed ‘danger’ to ‘threat’ in public discourse, when the emphasis was shifted from a danger that is ‘observable’ to ‘threat’ that ‘is felt to be’. The 9/11 attacks on the United States represented a historical point that drew away attention from the criminals responsible and the complex systems behind their crimes to the simple and vague idea of a ‘war on terror’. It introduced a mutated global security landscape that influenced the formation of new meanings and knowledge around terror and threat, as well as ways to deal with it. Massumi states that a threat as a notion has a future in its meaning, it has a ‘loom’, and it’s enough for a threat to be felt to be real. Massumi says that even if some event does not happen to an individual in reality, if it was pronounced, mediated or just imagined, the ‘shadow of threat’ is experienced as an event that has already happened though sensation, perception, and memory. A threat, compared to danger, reinforces subsequent reaction and action. In this logic, if something is going to happen, it is better to strike first and prevent it – to launch a ‘war on terror’ and to introduce it as the only available approach to stopping the violence. Thus, terror is a tool that produces fear, while ‘fear’ is a political resource that is utilised by those who intimidate and those who protect the intimidated. 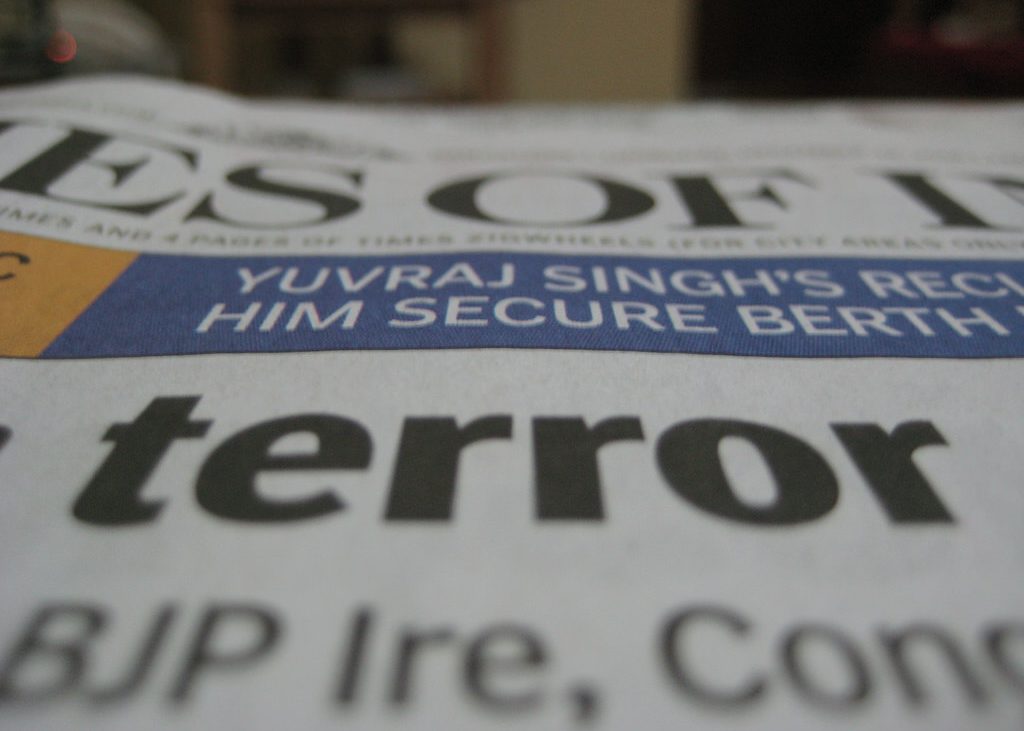 It is a very interesting fact that the more we arm ourselves with the realm of social media in order to fix and document reality as it is, the more reality escapes from our hands and the more we feel confused when losing track in the flows of information noise. In a philosophical sense, the actual events and reality cannot be accessed, and it is impossible to mediate them through understanding and description. From the point of view of cultural studies, a real event will be anyway deformed in the complex media production cycle. However, in a world which is constantly mediated, a piece of information appears to be more or less credible depending on its communicative potential and access to reproduction. It leads to a simplification of the complexity of deeply problematised situations, their reduction to simple concepts, a failure to relate them to global political, economic and social issues. This in turn results in the creation of mystical and largely unchallenging ideas about the most problematic contemporary issues.

What is post-truth then? The post-truth phenomenon is rather illustrative indicator of our time, which shows all the complexity of the modern mediascape. The Oxford English Dictionary declared post-truth to be the Word of the Year 2016, defining it as ‘relating to or denoting circumstances in which objective facts are less influential in shaping public opinion than appeals to emotion and personal belief’4. The problem is not that the truth is already unattainable, but that the truth is not so important anymore. The truth is, in a way, becoming a matter of choice – between complex and simple, comprehensible and incomprehensible, conservative or progressive, soothing or annoying, hope and hopelessness, bright tomorrow or apocalypse. New truth appears to be a great menu, where everyone will find something to their taste, and, taking in account media’s affective role, this process of selecting the best option is also sometimes non-cognitive, non-conscious and irrational. Thus, a power of mediated artefacts lies not so much in their factual foundation but rather in their ability to create ‘affective resonances’.

Regardless of the duration, intensity, and target of implemented violence, terror’s aim stays unaltered – to intimidate.

Stories on ‘terror’ are also inscribed into media texts of particular representational styles that are selected in accordance with a publication’s professional standards and values, and in order to meet the demands of the competitive market, they circulate widely. The softening of news, tabloidisation and the growth of infotainment are the trends that characterise the contemporary media state. News with politically relevant topics, societal relevance, thematic framings, impersonal and unemotional reporting circulate in the same market with messages that are not politically relevant but prioritise personal and emotional reporting styles.

Therefore, the marketed economy prioritises specific framings on the basis of their potential competitiveness, while their authenticity may play an insignificant role. A cognitive and emotional perception of representations, regardless of their relation to reality influences our knowledge formation. The majority of media stories relating to ‘terror’, whether this is war events or brutal attacks, tend to focus on suffering. Lillie Chouliaraki, in her book Ironic Spectator, examines the question of the representation of suffering in the domain of the ‘post-humanitarian imaginary’. She suggests that vulnerability is commodified and depoliticised in a media-driven consumer market. According to Chouliaraki, market-centred journalism turns vulnerability into sensational spectacles. In this marketed and depoliticised environment we may observe the disappearance of a factual background describing the deep political causes of the suffering. Thus, considering it through the prism of Massumi’s approach, media products with higher affective potential take priority in the creation of knowledge independent of the authenticity of their content.

And if we ask ourselves what media narrative we meet more often – the one that puts the terror, suffering and the ‘promise of retaliation’8 in one meaningful narrative or the one that focuses on terror and its economic and political viability and how to undermine it – the answer will be quite obvious. Perhaps the era of post-truth does say that the effectiveness of communication defeats the truth, though there may be spheres for which it is not so catastrophic, but the global challenges of modernity, one of which is terror, can not be resolved without a public request for truth, even if this concept requires redefinition.