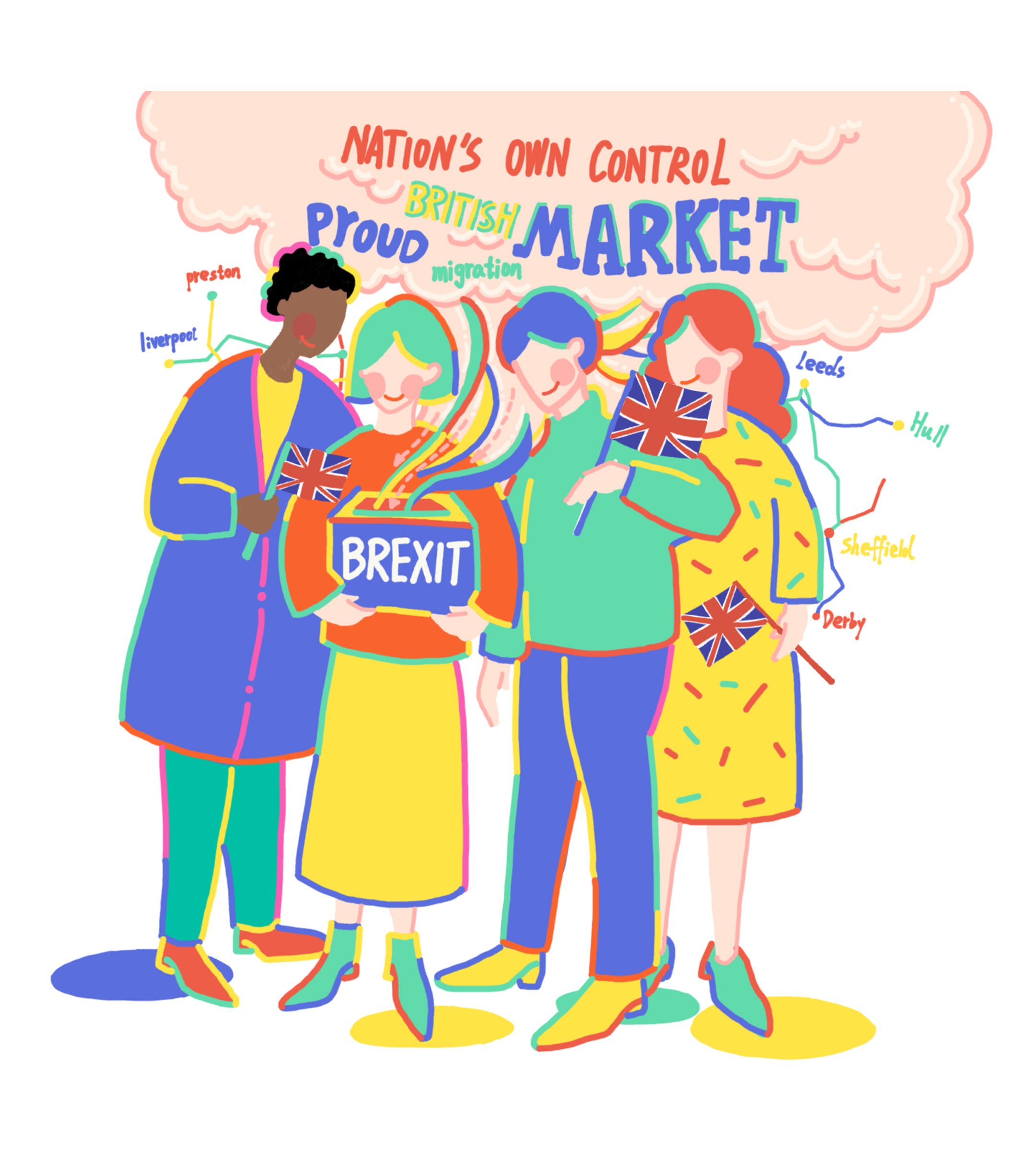 Last summer, Britain became a divided nation when we had to decide whether or not to remain part of the European Union. The result was a narrow, but decisive, vote to leave and the debate raised a host of issues from the funding of the NHS to immigration.

The nation was split geographically, too, with some areas voting overwhelmingly to leave and others opting equally strongly to stay. The citizens of London in particular tended to be very pro-Europe but much of the North and the Midlands was in favour of Brexit. When the results of the referendum were revealed and it became clear that the UK would officially leave the European Union, it came as a massive shock to many Londoners and a cause for rejoice to many outside the capital.

At the time of the referendum, I was working in an extremely multi-cultural primary school in Leeds, where over 33 languages were spoken and the children came from around the world to learn. I was in no doubt that I would vote to remain and assumed that most of my colleagues would do the same. Yet it emerged that and although I had firmly made up my mind on how I would vote, many others were far less certain. In the end, Leeds voted narrowly to remain but the rest of Yorkshire voted resoundingly to leave.

When I moved to London in the early autumn of 2016, with Brexit fresh in people’s minds, I found myself being blamed for Brexit by angry Londoners because I was a ‘northerner’. Because of where I was born and had lived, I must, in their eyes, have voted to leave. In their anger, I detected little real understanding of why so many people in my home city and places like it had voted to come out of Europe. Those who voted Remain pointed to the worrying number number of post-Brexit incidents of racist abuse and violence as evidence that Leave voters were both ignorant and prejudiced. Was it really a vote based on fear and discrimination, as many in London claimed?

A few months later, on March 29, 2017, the papers were signed and Article 50 was delivered to the EU, meaning that the process of Brexit had formally begun. It seemed a good moment to find out what people in the ‘Leave’ heartlands were thinking so I took a trip to the East Midlands.

The first person I spoke to was Genevra Jones, 66, a retired journalist who lives in Derby. Her reasons for voting to leave were complex and partly, she said, to do with her age, having been born and grown up in the era of strong links to the British Commonwealth, when butter and lamb came from New Zealand, meat and wool from Australia with British branded goods, from China to cars shipped back in return.

“When we were asked to vote on whether we wanted to join the new Common Market, we lost many of those links. And do notice the words ‘Common Market’ which was all we that was in question during the last referendum. It was all to do with trade. Shortly after that we started hearing stories about ‘butter mountains’ and ‘wine lakes’ as the new common agricultural policy started to encourage farmers, with financial incentives, to produce vast amounts of milk and alcohol, which was sold off at cut price in European supermarkets.”

Genevra argued that, from its beginnings as a trade arrangement, the EU has grown to exercise too much power. “Over the years, Europe gradually started taking over other aspects of our lives, and started interfering with our laws. New rules came into force, which were legally binding, but had not been agreed by the British Parliament, but which had to be carried out by our judiciary.

Then came the Euro, which thank goodness we did not join, and has caused such financial chaos to some of the poorer countries which joined later, and which suffered, as should have been obvious, to cope with the greater financial stability and strength of the German economy.”

“People believed that if we left Europe, our economy would fail. We would no longer be able to export our goods abroad. This, if I may say so is a load of rubbish. As if we didn’t have the rest of the world to make trade agreements with. Other countries exist without joining the EU.

And there is the question of the cash we get in European grants. They of course will disappear. But Should be more than made up for by the billions that we will no longer have to contribute to the European melting pot. So. Why did I vote for Brexit? Well because I wanted my country back in control of our laws, our finances, our trade, and yes, our immigration. I am proud of my country and its strengths, and believe as an independent nation, as we once were, we can thrive on our own.”

Genvra was angered by negative attitudes to people who voted Remain. “Brexiteers have received a lot of stick from Remainers, being branded ‘racist’ or sneeringly ‘Little Englanders’ for their views that helped nudge the recent referendum’s swingometer just over the line from remain to leave. And their attitude leaves me feeling rather angry.”

I found myself being blamed for Brexit by angry Londoners because I was a ‘northerner’.

However, she acknowledged the role that migration played in the debate. “There was no thought, when we joined the Common Market, that it would open the way to vast numbers of people who could enter our borders freely through joining the European Union. Though Europe seems to be stretching its borders and definition on a daily basis. When the borders were opened, there was an initial trickle, which has since turned into a rush. England is one of the, or perhaps even the, most highly populated countries in Europe. New people means new houses, new schools, hospitals, doctors, the whole kit and caboodle. And the cash to fund our overstrained infrastructure isn’t always there.”

Tim Diltry,28, is also from Derby and, though initially undecided, ultimately opted to voted Leave.“I didn’t really understand the system as it was never really anything that came up in my life until Brexit. After doing a lot of research, I discovered that the EU parliament is meant to be democratic and so the president of the EU rotates, which is something I generally agree with. But, problems for me occur when it turns out that that most people who end up in this position have bought their way in! For me, this is the main reason I voted to leave.”

Like Genevra, Tim said migration was significant in his decision. “EU law is that refugees must apply for refugee status in the country they will be residing in, but these laws were ignored. Angela Merkel let in so many people into Germany that the UK followed suite and the people that entered these countries are uneducated people who have no-prospects for the future. If these laws are made and not being upheld, then what is the point of EU law? There is the equivalent of a small city’s worth of people coming into the UK each year, that’s new schools, new hospitals along with everything else people need and I just don’t think we have the resources to pay for that”

Nine months after the referendum, Tim had no regrets about voting Leave. “My hopes for the future now that we have left the EU is that we will become a stronger market again and we still start trade deals with growing markets. As an English man, I have a very strong English heritage and I want to be able to pass on more of a cultural identity down to future generations.”

Chloe, 25, is a research assistant in Nottingham who knows many people who voted Brexit for different reasons> However, she believes a significant issue for many was the feeling that people felt power had been taken away from ‘ the normal worker’ by a distant European elite.

“People I know saw the EU as unfair with Brussels centralising wealth and power . The people at the ‘top’ do not inspire confidence and do nothing to create trust between themselves and the people of the EU. Small people didn’t matter to them and it can be seen in trades deals like TTIP.”

For Chloe, the European project of integration between countries seemed to take little account of national identity. She believes people voted voted Brexit because they felt powerless and ignored. “Many people who voted to leave had little to lose, people who were poor and felt let down by the government and the EU. With few jobs and prospects these people felt that uncertain change was better than no change. This referendum was the first-time people were truly able to express themselves. They were unhappy and though the government do little to help, neither did the EU.

Chloe is already seeing benefits from the Brexit vote. “Overall people feel it has made the community a lot closer and more positive. My town was a majority leave town and when the referendum came around and people began talking about politics, they realised that they agreed with each other on most things. Even people who voted remain felt many of the same things and recognised the EU’s shortcomings. It has got people talking to each other.

Many people hope we will be in control of our future, be a completely self-governing nation. They want production to come back to the UK, bring back the industries that were the centre and the wealth of the small communities that were built around them.”

David Finn, a 68-year-old retired Journalist living in Derby, voted Leave because he felt it would give Britain greater control over its own destiny.

“When the UK voted to join the European Union back in 1973, the monsters that are now Brussels and Strasbourg were then but little babies. Since then the powers that the EU has been able to wrest away from its member countries have been nothing short of dictatorial. Hitler himself would have been proud. The intervening years have been like watching a country and nation we are proud to call home wrenched away from our control. Before joining the Common Market, UK could happily and profitably trade anywhere in the world we could do business. Now we have to stick to EU negotiated tariffs and markets.”

“But the actual laws now throttling our way of life are my main gripe. When we sign Article 50 and two years later actually break free, we shall have to take into our constitution all the EU legislation. Once that is done we can then cherry pick which of the parts we want to keep. That gives us the opportunity of a lifetime. The opportunity to reclaim our sovereignty. The opportunity to actually make our own way in the world, unencumbered by EU red tape.

David has a message for Remainers who believe Brexit is bad for Britain. “For those people who are fearful of our being able to stand on our own two feet, and a lot of these would be young people who have not known life outside the EU, I encourage them to be proud of who we are. Proud of what we have achieved over the centuries. Proud of how we have helped to shape the world. Proud of our ability to invent and keep moving forward. Simply be proud to be British again.”