Friend or Foe? Our ocean’s most threatened species

When the movie Jaws took over our cinema screens in 1975, with blood-stained images of frenzied sharks feasting on tethered human flesh, it aroused a primal dread of the shark that still remains embedded in the human psyche.

The vilified image of the shark was propelled into media and literature worldwide.

In 2007, when the Discovery Channel presented Sharkman in their Shark Week series, it punctured many preconceived illusions of the malevolent predator.

Although more than 500 species are present in the depths of our ocean, in our popular imagination, only one prevails; The Great White shark, Carcharodon Carcharias.

Weighing up to 3,400 kg, its powerful body is supported by a cartilaginous skeleton, its taut flesh, the texture of sand paper.

In Sharkman, a scene shows a portly streamlined body approach from the gloom. Face on, one is reminded why this is the most feared animal on earth. The look of bemusement compliments a jaw armed with two-inch teeth.

The predator swims into the light, where it is joined in the frame by a human, the sharkman, Mike Rutzen.

Although Rutzen resembles living flesh floating helplessly on the surface, he is using body language to communicate with the predator. To attract the predator closer, he curls into a ball to become smaller and less threatening.

The only contact established between the two as the shark swims past, is the gentle caress of the shark’s snout, defying all illusions that these majestic predators are man-eaters.

“Only prey run away from predators, it is the same thing with dogs and big cats,” reflects Rutzen. “It’s important to keep eye contact and stand your ground.”

This is a typical day in the life of Mike Rutzen, Shark cage diving operator and conservation advocate for Great White Sharks in Gansbaai, South Africa.

Over ten years of free-diving among the sharks has made him one of the world’s foremost White shark divers.

“It became a great tool for learning about the shark and to promote white shark conservation and dispel the myths around them,” he reflects.

“The knowledge I gathered from decades of work in the field is something that scientists can’t acquire from the books they study at Universities, so I have always shared my knowledge with marine scientists in the Department of Environmental Affairs of South Africa or other dedicated marine biologists.” 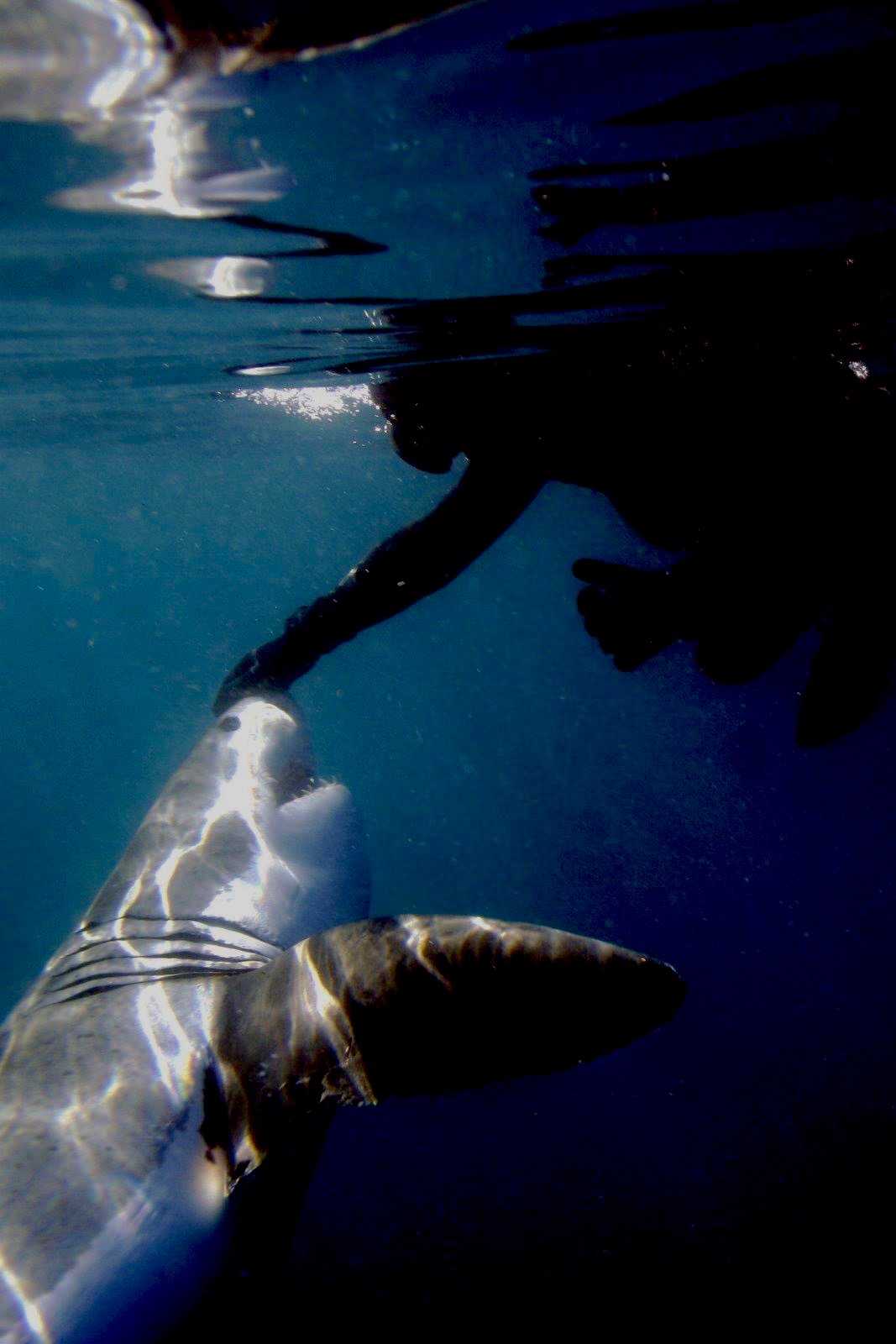 In recent years, the shark’s inestimable role in the ecosystem has come to the forefront of conservationist concerns, following studies that show that the species is in jeopardy worldwide.

The Great White has been classified vulnerable on the Red List of threatened species, according to the IUCN, and its fearsome reputation has made conservation efforts difficult to initiate.

Media-fanned campaigns to kill Great Whites have occasionally occurred following shark attacks, or simply in anticipation of such attacks.

“I haven’t picked up any major changes in their behaviour, but I am seeing less and less large animals around our vessels, and I’ve most definitely noticed a decline in their numbers,” says Rutzen.

Shark attacks on humans are often a case of mistaken identity, in fact, sharks bite fewer people each year than New Yorkers do, according to health department records.

“They are wild animals,” says Rutzen. “And sometimes it takes longer for us to understand what triggered a certain response from them, but it is never unprovoked or unpredictable.”

The shark’s impeccable eyesight urges Rutzen to keep eye contact with the shark at all times.

Their vision is ten times more powerful than a human’s and the pores that bespeckle their snout act as a electro-sensors, enabling them to detect the electromagnetic energy of other living beings.

They can detect sounds from over a mile away, allowing them to efficiently track down activity or blood travelling through the currents.

Their inquisitive nature and tendency to investigate human activities makes it easy for Rutzen to lure in the sharks with buckets of chum (fish blood).

Once sharks appear around the boat, Rutzen studies their behaviour to establish whether they’re feeling playful or cautious.

On a good day, if the visibility of the water allows, he jumps in.

“If you work with white sharks long enough you start picking up changes in their swimming speed and the way they utilise the water column.

If they are relaxed and the environmental conditions are right such as good visibility and calm sea, then there is a good chance that they will allow me to get in,” says Rutzen.

He recounts his most memorable moment diving with a Great White shark: “At the time we were still allowed to gently hold on to the shark’s dorsal fin for documentary purposes.

While I was fin-riding a large female White shark, she swam under the cage hanging from the boat, I realised I was going to hit the cage and would be forced to let go, but she swam a little deeper instead, so that I could stay holding on to her.

The shark is harpooned, reeled to the surface, has its fins amputated and is thereafter thrown back into the ocean, where it is left to drown, often eaten alive during it’s descent to certain death

Bearing in mind that Great Whites have a sensory system on their body that allows them to detect every movement around them, I like to believe that she made sure I didn’t bump into the cage.”

73 million sharks die annually for their fins and at this rate scientists worry that shark populations will be dangerously depleted within the next decade.

Studies in the Caribbean suggest that where sharks are a keystone species, their depletion could topple ancient food chain hierarchies and destroy entire reefs.

“I am seeing less and less large animals around our vessels, I’ve most definitely noticed a decline in their numbers,” reflects Rutzen.

The demand from the Chinese market has led to grand-scale shark finning; an act of fishing in which the shark is harpooned, reeled to the surface, has its fins amputated and is thereafter thrown back into the ocean, where it is left to drown, often eaten alive during its descent to certain death.

Cristina Zenato, Conservationist and shark diving professional, says that some shark finning awareness campaigns, are succeeding in the battle against the practice: “Singapore and Hong Kong have registered a decrease of 33% in the demand for shark fins in just one year, but the road to resolving this problem is still long and the effort needed to assist the shark’s plight is enormous.”

Large scale bans on finning, reporting of sharks caught unintentionally and establishment of marine sanctuaries could all play major role in helping to ease the shark’s future welfare.

Scientists have suggested that shark repellent could potentially save up to 50 thousand sharks who are caught on long lines during the night time.

“Sharks are a link in the ecology of the oceans, we actually haven’t grasped the magnitude of their presence and the catastrophic consequences we could cause to the ecosystem.”

In 2011 the Bahamas Government declared more than 600,000 km² as a shark sanctuary, prohibiting any commercial fishing of the animals as well as banning the possession, sale or trade of any shark products.

Here Cristina Zenato, has twenty years of experience to illustrate the calm nature of the animal through her daily interactions with them.

Although sharks species are dropping in numbers in some places around the world, in the Caribbean they are still thriving: “Bahamians don’t traditionally consume sharks, I haven’t noticed any decrease in their numbers,” says Cristina.

“As for changes in their behaviour; When the divers show up in the water, the sharks stay with us now, instead of swimming away.”

Footage of her shows Caribbean reef sharks swarm around her as she kneels on the sea bed, handing out fish heads. She gently stimulates the shark’s snout, which then sinks to the ocean floor. “With time and repetition many have become accustomed to my presence and touch and even seem to seek it,” says Zenato.

Like Rutzen, Zenato has used her expertise to defend the shark’s cause. “I do believe that no matter how many times it has been demonstrated that sharks are a link in the ecology of the oceans, we actually haven’t grasped the magnitude of their presence and the catastrophic consequences we could cause to the ecosystem,” shares Cristina.

“The shark is misunderstood, and this causes many to think of the shark as a nuisance that needs to be ridded from the ocean in order to make it a safer environment,” she adds.

The ocean is made up of very intricate food webs, and since sharks are at the top of this food web, they are considered to be a keystone species, and removing them will cause the whole structure to collapse.

Our journey has brought humans closer than ever to the shark but their vulnerability is calling out for our interference. Their threat to mankind is minimal versus the threat their disappearance will cause to our ecosystem.

Looking beyond their jagged jaws and accepting them for the magnificent predators that they are, will bring us one step closer towards saving the planet.