The script has remained the same for years.

What ensues is a rigid performance of cocksure thrusting and feigned moans by which the macho man eventually unloads himself, leaving the two poor doves saturated in fruitless incompletion.

It’s not realistic, and yet, this Hollywood myth has become the norm.

I dare say consumed, as statistics now show that female consumption is on the rise.

Ian Paul, CIO of Naughty America, one of the largest producers of adult VR in the US responded to the low number of female point of view videos stating:

“I was in tears, I sincerely hope that no one enjoys that scene. I want to cry when I think about it.”

The bewilderment of being able to unlock the “mystifying” female sex in order to make VR enjoyable to women will mean that for the first time, pornographic content will be created that focuses entirely on the female pleasure perspective.

Until now, this has been relatively uncharted territory with only a few anti-mainstream warriors as exceptions.

With current content featuring little emphasis on actual stimulation for women, the industry has finally been forced into the realisation that the current(-ly out-dated) form may not be appealing all round.

Male domination and the predominance of the male sex has been sugarcoated for years.

In a recent study of 304 popular adult videos, it was found that 88.2 per cent contained physical aggression and 49 per cent featured verbal aggression against women.

With hardcore sex acts weighing in heavily, we are also seeing a stronger undercurrent that pressures those in submissive roles to look as if they are enjoying abuse.

One extreme case of this is seen in the 2005 adult film, Donkey Punch, where the male performers are seen to kick, punch, strangle, pull the hair of, gag and spit on their female co-stars.

The name Donkey Punch comes from the apocryphal act of administering a blow to the back of a partner’s head which will cause certain muscles to contract, increasing male pleasure when climaxing.

Alex Devine, who suffered the brunt of the ill-treatment during Donkey Punch’s filming commented on a particular scene where she is punched repeatedly: “I have tried to block it out from my memory due to the severe abuse I received… I actually stopped the scene while it was being filmed because I was in too much pain.

“At the end of my scene they had me sit on the couch with the directors and explain that I was OK and was willing to do the scene. I was in tears I sincerely hope that no one enjoys that scene. I want to cry when I think about it.”

As unprotected sex is now standard in the industry, approximately 1 in 4 performers get infected with an STI, in comparison to only 2.4 per cent of the general public.

Many production companies do require a clean bill of health from their performers, valid within 14 days of the shoot date and uploaded to a mass database.

However, this is not watertight as HIV, in particular, can be largely undetectable for up to six months and so actors can unknowingly work with a false negative health clearance. 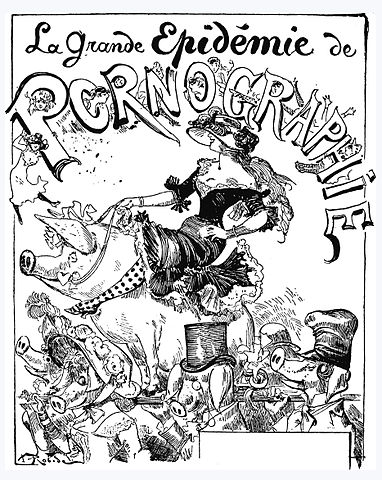 There have been cases of HIV spreading through the network before such as in 2010 and 2014 when an actor slept with 17 others after being falsely cleared of the virus.

This matters because as a society we are watching more than ever.

With iPhones becoming the next generation’s Nokia brick, approximately 1 in 3 ten-year-olds now own smartphone devices, and 11 per cent of them have claimed to have seen hardcore sex online.

Sex in its most organic state is profoundly intimate, when it has been reduced down to a commodity to be bought and sold, it becomes completely removed from its innate human element.

The representation of a woman as a commodity to male pleasure creates an unnecessary gender taboo whereby the sexualisation of a woman is fair game, (lesbian being the top search term in 2016) but an emphasis on positive female sexual liberation is missing or of minor importance.

The bombardment of concentrated pseudo-masculinity reinforces an archaic portrayal of men. This is equally dangerous as contributes to the ‘masculinity crisis’ whereby perceived ideals of gender are warped. Young people need to know that they can explore sex and gender roles outside of heteronormative binary terms, in different ways than are presented to them in standard pornography.

It wouldn’t take a lot to turn an industry that has lost its way into a safer, more loving place for everyone.

In order to shape a world of adults with healthy attitudes, we need to form a contemporary narrative that communicates natural and realistic behaviour.

That is produced with individuals representative of outside of the San Fernando Valley, from the whole gender spectrum and Kinsey scale, so that we can fully showcase our sexy global demographic in all its real glory.