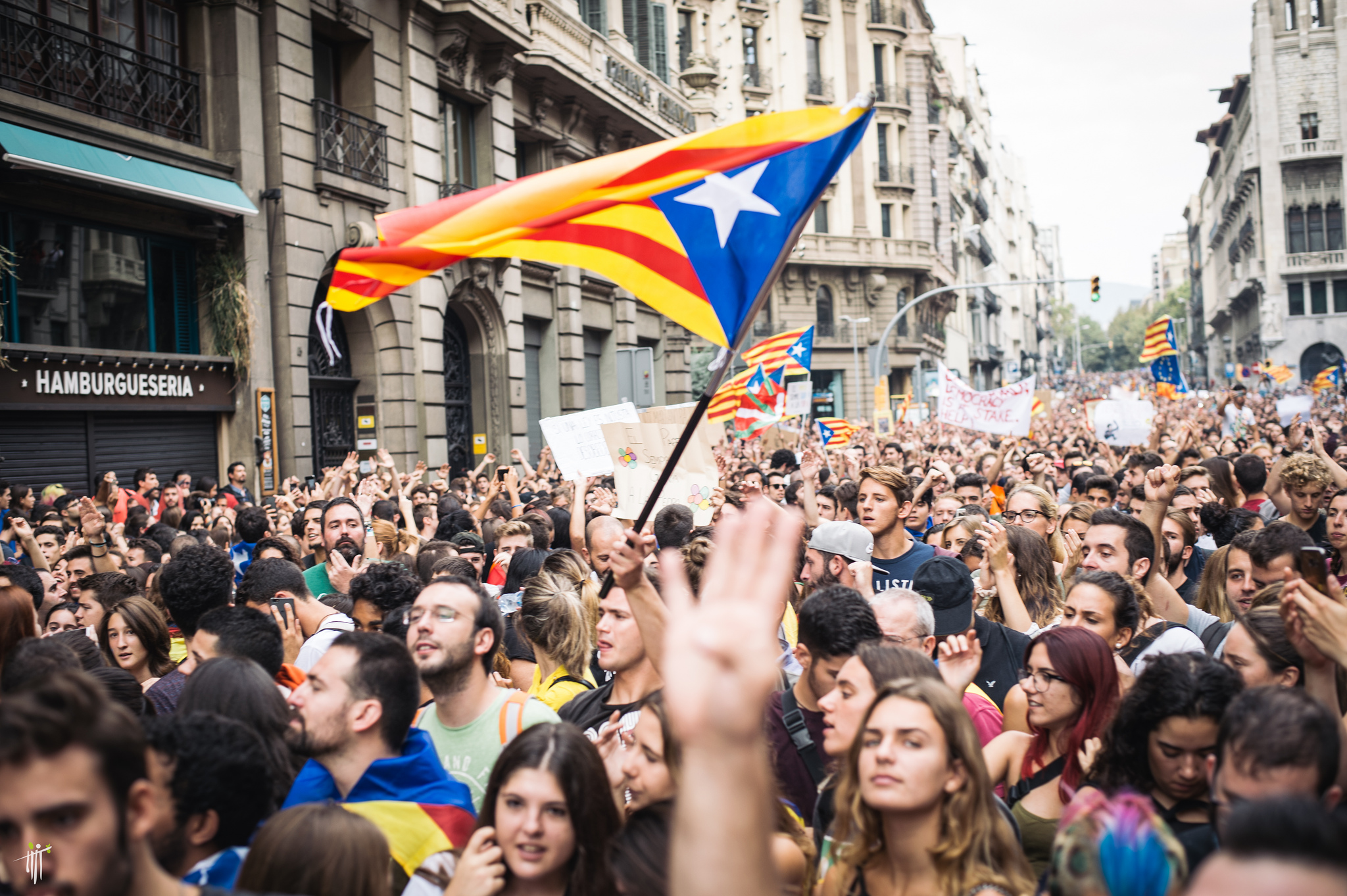 The riot police were the main characters of Catalonia´s polemic independence referendum. European media have shown the brutality of the riot that led to more than 800 people being injured.

Political issues were quickly forgotten after police officers were seen beating voters with batons and dragging them away from polling stations. Riot police used pepper spray and fired rubber bullets, something which has been forbidden since 2014.

Spanish police dealing with someone who wants to cast a vote. What a disgrace. #referendum1deoctubre pic.twitter.com/D8qmA1aVJ9

The Government of Catalonia called people for a formal referendum disregarding the fact that the Constitutional Court judged it to be illegal. In the days before the vote, the police officers requisitioned ballots and polls. There were power cuts and some of the station polls were shut. On referendum day, the Spanish government sent police forces from all over the country to try and frustrate the vote.

Catalonia is one of the Spanish regions that enjoy a level of autonomy alongside Andalusia, the Basque Country and Galicia. Catalonia is a historical community that dates from the beginning of the 12th century.

As the famous violoncellist Pau Casals said: “Catalonia is today a region of Spain. But Catalonia was one of the greatest nations of the world, and I tell you why: Catalonia had the first democratic Parliament, even before England.”

Casals explained this to the United Nations dignitaries when he received his United Nations Peace Medal in 1971 for his antifascist compromise during the Spanish Civil War and World War II. 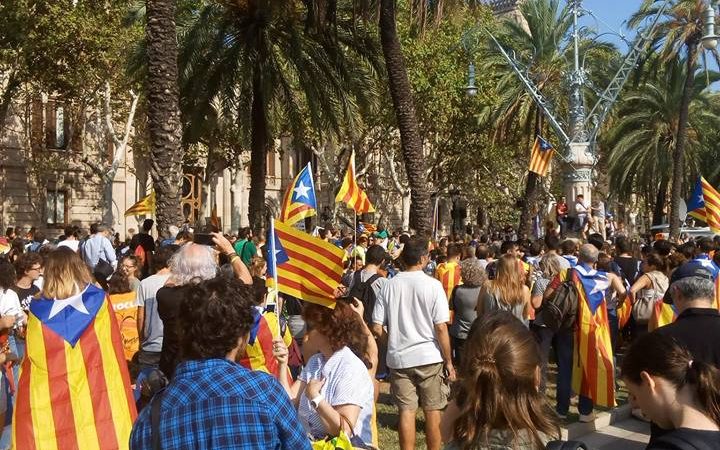 March in favour of independence in Barcelona [Flickr:Iñaki García López]

Catalonia is still trying to re-adjust its national reality with the Spanish state in what is considered as a never-ending battle. In 2005, a new Statute was approved in both the Catalan and the Spanish Parliaments, as well as in the Spanish Senate. It came into law in 2006. The Popular Party, in opposition at that time, immediately contested it in the Constitutional Court. After a long juridical process, the Court abolished some of the key articles of the text including the right to organise a referendum without the consent of the Spanish Parliament. This is what led to the current conflict between democratic legitimacy and legality.

The referendum, which was organised and supported by the Catalan authorities, is considered illegal and invalid. Organising an illegal vote is very risky and even irresponsible. However, the brutality shown by the Spanish police forces was considered unsuitable for a democratic state.

“This is a sad day for Spain and for the whole of Europe, the feelings of so many Catalans that took to the streets must also be heard”

Scottish Prime Minister Nicola Sturgeon said: “We should all condemn the scenes being witnessed and call on Spain to change course before someone is seriously hurt.” Guy Verhofstadt, former Belgium Prime Minister and leader of the Alliance of Liberal Democrats in Europe, said: “I don’t want to interfere in the domestic issues of Spain but I absolutely condemn what happened in Catalonia.”

The leader of the Socialists and Democrats group Gianna Pittella also condemned the brutal police intervention: “This is a sad day for Spain and for the whole of Europe, the feelings of so many Catalans that took to the streets must also be heard. The solution can only be a political response, not a police one.” 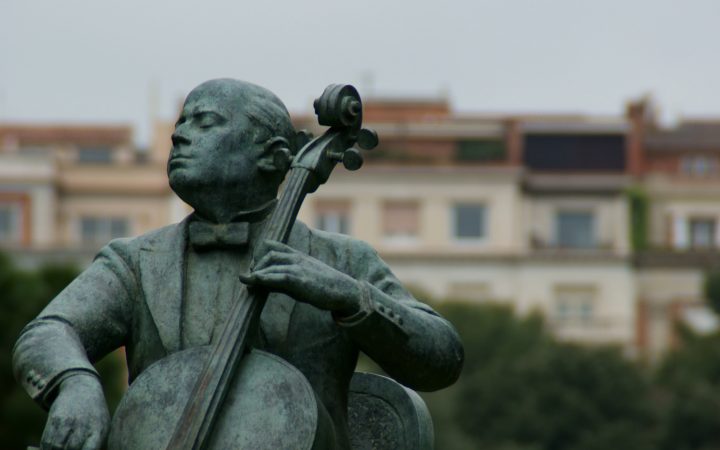 The region of Catalonia has a very long history and, some historians place the roots of Catalonia in the ninth century when Wilfredo the Hairy, Count of Barcelona, broke the links between the Pyrenees regions with the Carolingian Empire and the Frankish kings who reigned over those areas at that time.

The words of Casals refer to the first centuries of the Catalan nation when the “Peace and Truce Assembly” (first dating from 1027) were made to protect the rights of the farmers from the abuse of the feudal Nobles, and it made the base for the First Royal Catalan Courts created in 1283.

King James I reconquered Majorca and Valencia from the Moors in the 13th century, and Catalonia became one of the greatest Kingdoms of the western Mediterranean. They had a great military power as well as an extensive maritime trade empire. 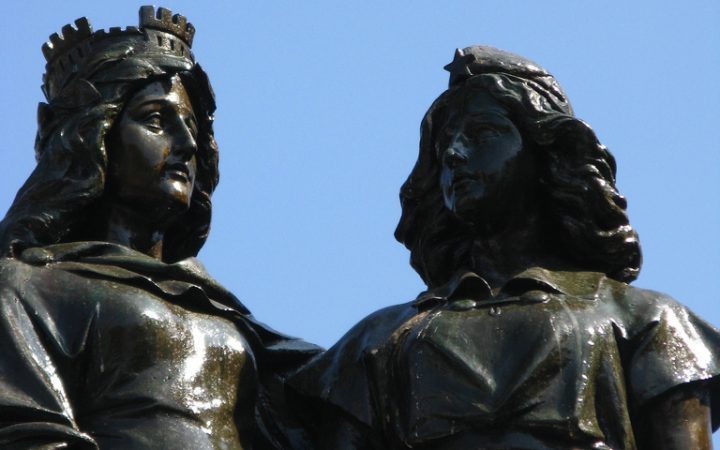 It came to an end when King Ferdinand II of Aragon and Count of Barcelona married Queen Isabella I of Castile in 1469, creating with this marriage the birth of the Spanish Kingdom. The Catholic Monarchs were the most influential and powerful monarchies on the continent when they, through Cristobal Colon (often Anglicises as Christopher Columbus), ‘discovered’ America. The point of trade and commerce moved from the Mediterranean Sea to the Atlantic Ocean, a move which also began to undermine the relationship between Castile and Aragon.

Since the Aragon Kingdom, Catalonia has not been an independent state and it has belonged to and shaped what Spain is today. Catalan people have always been famous for their spirit of mobilisation and political organisation.

Currently, Barcelona is a model multicultural space. Arts and culture flow all around Gaudi´s city. Barcelona has also been the most cited example for people fighting for their rights on the streets. 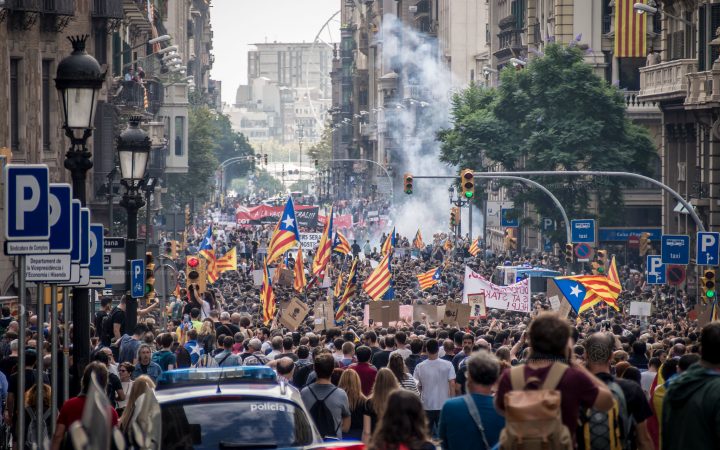 After the brutal journey of Catalonia, the result was that 90% of people who went to vote (43% of the electorate) said yes to independence. It was a massive response from the Catalan society who had been waiting for many years for the referendum.

Media all over the world witnessed through hundreds of videos and pictures the aggression of the Spanish police. It is likely that the cruelty used by the Government as well as their lack of dialogue in recent years had an influence on the majority shown in the polls.

After the results of the referendum, the Catalan leader Carles Puigdemont said: “The citizens of Catalonia, we have won the right to have an independent state constituted in the form of a republic.”

The Parliament President added: “In the next few days, my government will send the results of today’s vote to the Catalan Parliament, where the sovereignty of our people lies, so that it can act in accordance with the law of the referendum.” 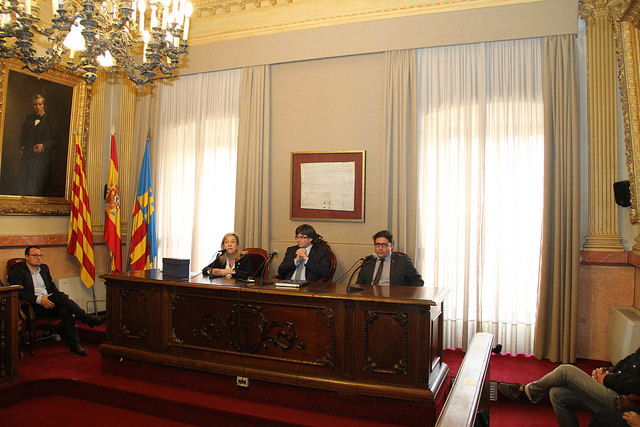 This declaration has provoked a political crisis in the country. The Spanish prime minister Mariano Rajoy called on the Catalan leader to respect the law or assume the consequences.

Puigdemont became the absolute protagonist in the Spanish media. He took the result of this referendum as an unconditional power to unilaterally declare the independence of Catalonia. The Spanish government is now facing the country´s biggest constitutional crisis. 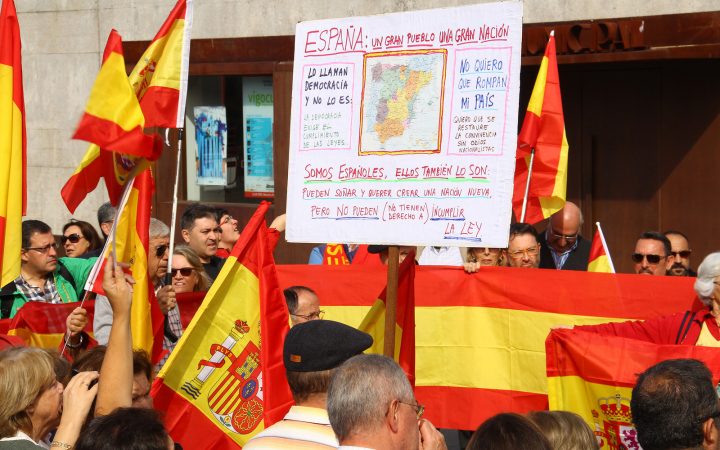 Over the next few days, there were huge mobilisations in the main cities of the country, some in favour of the Catalan independence and others supporting the unity of the country. Some of those strikes descended into aggression and injured people.

One week later, the president of the Generalitat declared the unilateral independence only to, fortunately, suspend it straight away, and open a “dialogue with Spanish executive”. This has been criticised by opponents and even supporters of the independent party.

“As the president of Catalonia I want to follow the people´s will for Catalonia to become an independent state.” To the applause of the parliament, Puigdemont said: “I ask for the mandate to make Catalonia an independent republic”.

But the mandatary immediately asked the parliament to “suspend it for a few weeks to open a period of dialogue.”

The response of Rajoy´s executive was to stick to their no-dialogue policy. “Neither Mr Puigdemont nor anybody else can impose mediation. Any dialogue between democrats has to take place within the law”, replied Soraya Sánez de Sanataria, Spain´s deputy prime minister.

The historic roots of the current problem

There is an event in the history of Spain that changed the future of both Spain and Catalonia. The point of no return arrived with the war of Spanish succession at the start of the 18th century.

Castile opted for Philip V, of the House of Bourbon (the current royal house), while Catalonia seconded the Archduke Charles VI of Austria. Catalonia was defeated in the resulting war which eventually ended in 1715.

In revenge for their opposition to his claim, the new King, Philip V, abolished Catalonia’s public institutions, banned the speaking of Catalan in public, and imposed the Castilian rule of law under the “Right of Military Conquest”.

Catalonian politics and culture recovered from this into the 19th century coinciding with the industrial revolution, and it became the main driver of the Spanish economy.

At the same time, a new generation of irreverent artists emerged, shaping a revolution within the society of the time, such as Santiago Rusiñol and Ramon Casas. They drove the artistic movement known as Catalan Modernism (equivalent of Art Nouveau).

Antonio Gaudí emerged as the architect in vogue amongst the Catalan society. La Pedrera, Casa Batlló, Parc Guell and the Sagrada Familia cathedral have become international icons of that artistic revolution.

With the establishment of the Second Spanish Republic in 1931, Catalonia´s right to self-government was recognized after 200 years. It was a short-lived situation because in the summer of 1936, General Francisco Franco led a military coup which sparked the Spanish Civil War. 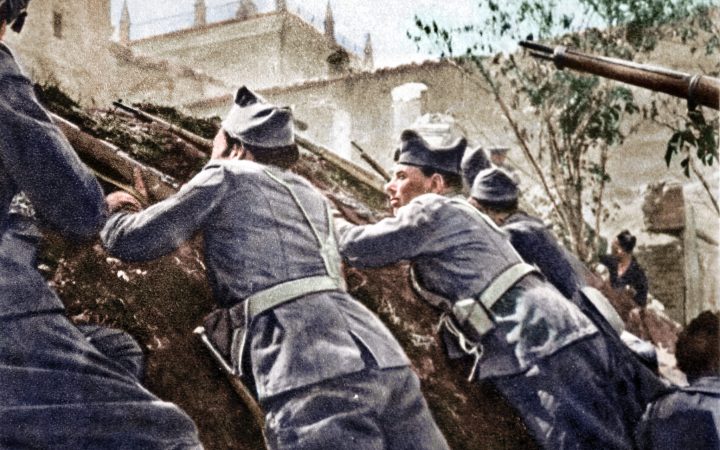 Franco eventually defeated the Republicans in 1939. This led to a fascist dictatorship which abolished the democratic public bodies, prohibited the freedom of expression and political parties and imposed the Catholic religion as well as persecuted any expression of Catalan identity over the following thirty-six years. Around 150.000 Catalans were imprisoned under Franco´s regime and almost 4,000 people were executed for political reasons.

After Franco died in 1978, Spain and Catalonia returned to democracy. Spain voted in favour of a new constitution which divided the state into seventeen autonomous regions and a new Statute of Autonomy was passed to regulate the relationship between Catalonia and the Spanish State.

The transition from Franco´s dictatorship to the monarchy parliamentary democracy is a controversial topic in current Spanish society. The new generations do not feel represented by politicians and the quality of the Spanish democracy is criticised by the citizens who have lived through a decade of economic and social crisis.

Another taboo topic from the “Transition” is Franco’s decision to delegate to the former King Juan Carlos II who consolidated the current Spanish democracy. The most polarising fact in Spanish society is that not one of the dictator´s men, neither politicians nor high ranking militaries were jailed or were condemned for any of the multiple crimes of the fascist dictatorship.

The party that currently forms the Spanish Government, funded by Manuel Fraga (Franco’s minister), has shown difficulties in accepting and dealing intelligently with the national, cultural and linguistic diversity in Spain, mainly with the Catalan region. This situation has only increased the support for the independence parties.

The Popular party is affected by more than 900 alleged cases of corruption cases, involving up to 45 billion euros taken from public money, where even the Prime Minister was called to declare in an investigation commission. This has now being overshadowed by public opinion due to the independence problem, which had not been treated as a real issue in recent years and as a result, it has now exploded in Rajoy’s hands.

The Government of Spain has treated the Catalan problem as a strictly legal issue and they have not tried to maintain a dialogue regarding what Catalan society wants. Despite facing many critics, this has been the only strategy that the Spanish right party had in order to stop it suffering its biggest polling losses in the history of its existence, creating a public debate about conduct in public office.

The Spanish Government is calling upon the population to defend the Spanish unity and flag, threatening Catalan representatives to respect the law to avoid ending up like the Catalan politician Lluis Companys, condemned to death and shot by Franco’s Regime in the 1940s. The worst possible reminder of the old and tragic times that Spain has experienced in the last century.