The art of the wheel 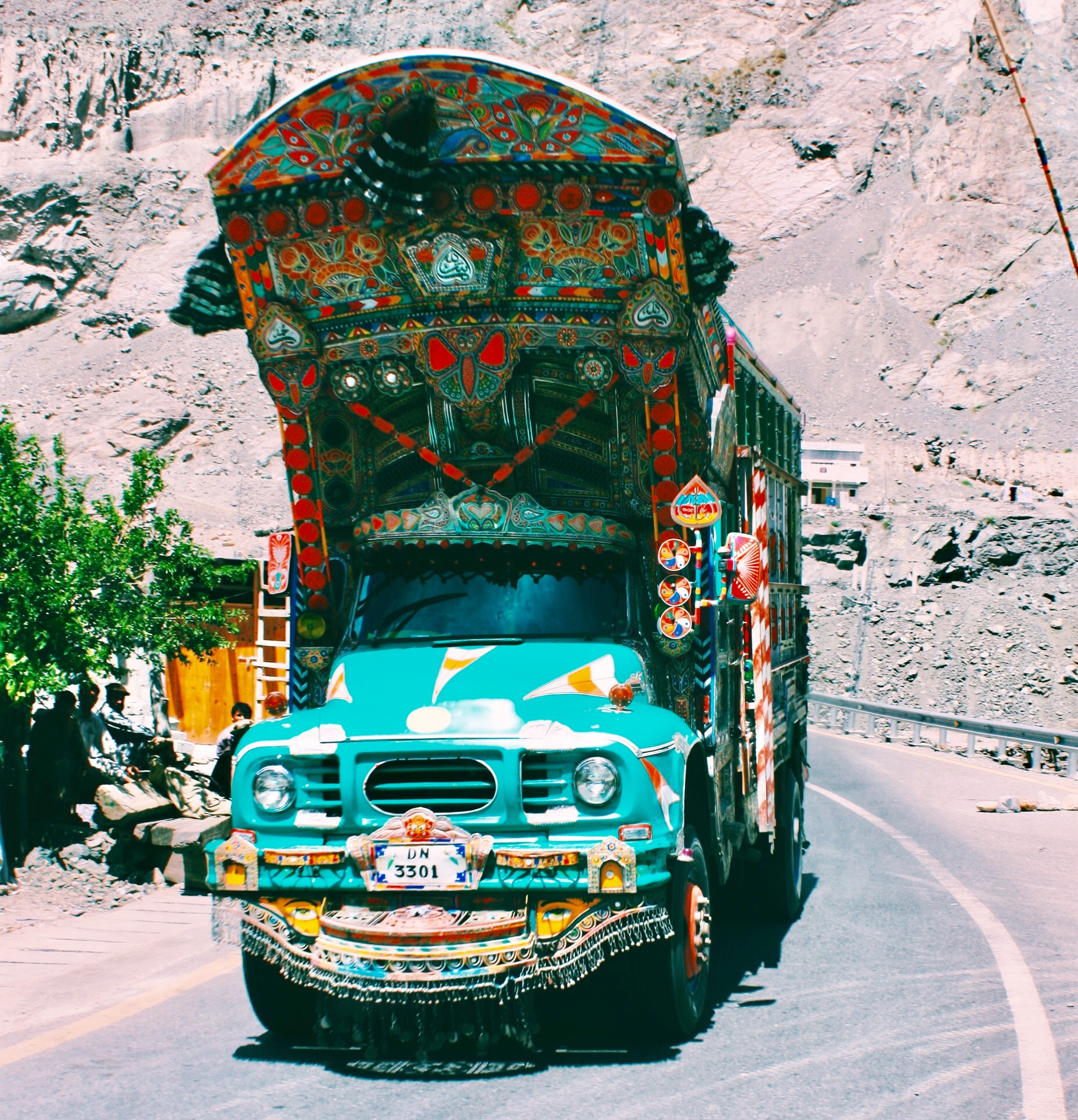 The concept of ‘Truck Art’ is quite self-explanatory, it’s a unique form of folk art that is created to highlight Pakistani heritage. The beauty that people witness in a museum is found on every road, and behind minimal resources and low wages are teams that works with passion and dedication. 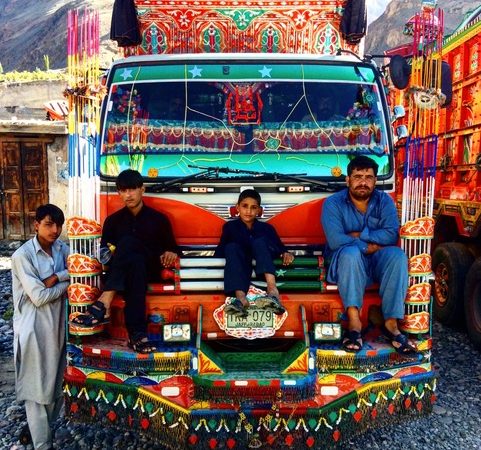 There it stood, my eyes shifting from side to side unable to decide what part of the piece to focus on. The composition of the painting is curious, bold and chaotic, mirroring the thought process of the artist.

Every colour, every line painted with such precise lines it almost looks like a picture. In the middle of Karachi’s gridlocked traffic, emerging from two rows of steel and tires stood a truck. Not just any ordinary truck but one decorated from bumper to bumper with all types of artistic mediums.

This truck is a canvas enriched with expression, culture, and history. This is Pakistan’s South Asian Truck Art and it has developed into a global phenomenon over the years.

Some see this as mere decoration but for the truck driver, their attention is fully devoted to the make-up of his “bride”. As the truck goes through the stages of transformation, the body parts of the vehicle take on human aspects.

Starting from the top of the truck, above the cabin sits the ‘crown’ or more traditionally known as the ‘Taj’ which lies along the lining of a silver, metallic decoration. Then comes the windscreen which replicates a ‘forehead’, also known as a ‘matha’, and to complete the face there is the bonnet which are the ‘lips’ or ‘hont’.

Typically, truck art consists of two forms: murals and painting to decorative pieces. The heavily-detailed decorations are made up of multicoloured reflective stickers, various sizes of mirrors and different styles of studs, which adorn the side of the vehicle and are overlaid on a mural or painting giving it its distinctive flashy appearance.

What adds to the fascination of this art form is the work that is put into it from ordinary working class people who have never had any professional artistic training,  and who create these masterpieces from pure raw talent despite of the challenges.

Although they barely receive any recognition and may only be given 600 rupees (£4.30) for each bus, the passion is what motivates them to pull through. It can be risky, because there is little or no protection gear available whilst they are working on these trucks, and the heavily-infused chemicals from the paints, thinners and petrol fuels has resulted to a number of truck drivers damaging their lungs.

Pakistanis value their colour, it is a nation that prides itself in colour schemes from textiles to how the brides are adorned. Although being a Truck Artist is not considered a reputable job in Pakistan, it doesn’t stop the artists from doing what they love. It has been known that some artists fall so deeply in love with their work that they can’t resist getting married to their trucks!

However worldwide it receives the recognition it deserves. Truck Art has been recognised worldwide since the 1970s when European and American tourists photographed the art; since then it’s reached London, Milan, Paris, and Melbourne (among others) where vehicles and even exhibitions inspired by this tradition are easily identifiable.

One of the towns that has truly celebrated the origins of this beautiful art form is Luton, 35 miles north of Central London. Here artists and artisans came together to work with professionals from the UK and Pakistan, to traditionally decorate their own Bedford Vauxhall Truck for an exhibition at Luton Culture Centre. 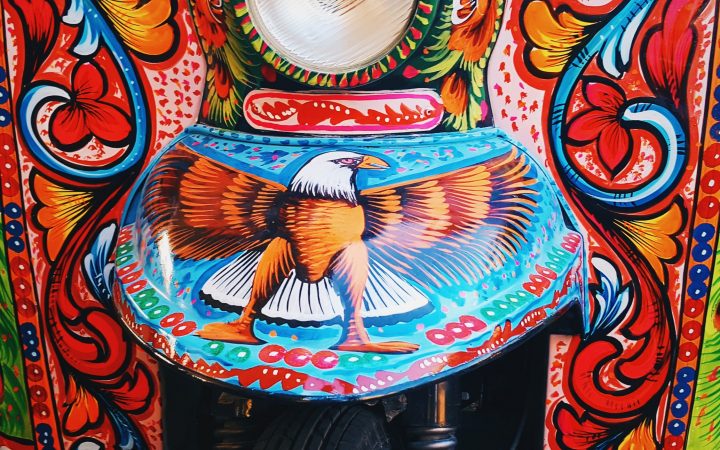 The mastermind behind the event, Fahim Qureshi, was able to give Artefact an insight into his inspiration and tell us more about his work.

The event took place during the 2012 Olympics which Qureshi says was a perfect time: “The theme for the Olympics was ‘Cultural Olympiad’ which was a great opportunity to bring this exhibition to Luton and share the Pakistani culture with the community”.

Without doubt, the art is breathtaking, but the most extraordinary part of this phenomenon is its history. During post-colonial times third world countries were sent Vauxhall Bedford Trucks to transport heavy goods and materials, which were originally made in Luton.

Qureshi told us: “There is a huge Pakistani population in Luton that all derive from working-class ancestry, it is important for them to recognise their heritage and be able to have elements such as art to engage in.”

A few years after Pakistan gained its independence, the art evolved into a political movement. Plastered on the rear of every truck were portraits of the country’s first military dictator Ayub Khan, painted by the supporters of his province.

It’s only since the 1970s that the whole truck would be utilised, covered in art and calligraphy. Inevitably, the art was soon exploited by promoters, becoming stylised billboards for Pakistani films which were found in workshops on roadside cafés.

Qureshi explained the process of how he put the exhibit together: “This was a very heavily researched project which took around two-and-a-half years to put together, with the first two years dedicated to making bank (funding). Once that was done it was another six to seven months spent on research/collecting the necessary resources and then six weeks to prepare the whole thing.” 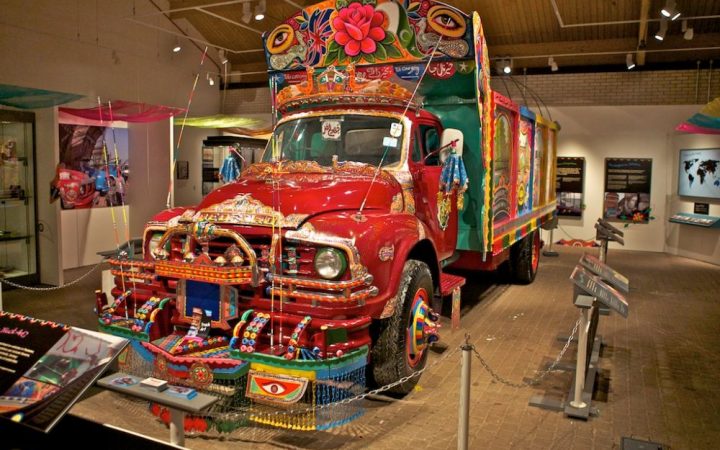 So was this exhibition something that segregated South-Asian and white communities even further? “On the contrary, it brought everyone together!” says Qureshi. “We had students from the Museum’s Youth Team (of all races) work with two professionals from two different countries to transform the truck. The artists were Pakistani truck artist Haidar Ali Khan and traditional gypsy British artist Rory Coxhill. To make sure they do the folk-art justice, six members of the team went on a trip to two main cities: Karachi and Lahore to gain first-hand experience and inspiration for their own truck.”

Haidar Ali is a Karachi-based truck artist whose work is internationally renowned. His art has been exhibited at the Smithsonian Institute in Washington and he was the leading artist during this Luton project.

The truck was a multi-colour vision and resonated with all its viewers. It sent a message of pride and multiculturalism, which is what Truck Art is all about.

Qureshi told us that he is planning to expand the exhibitions throughout the UK, to include cities like Manchester and Birmingham which have a large South Asian Population. The practice of Truck Art is still expanding and with new exhibition could find new international admirers.