The exposure of Harvey Weinstein’s sexually abusive behaviour behind the scenes of the film studios has definitely created a snowball effect.

Since the famous director has been accused repeatedly, we won’t be waiting long for Hollywood’s next scandalous sexual assault story.  Similarly, the music industry shares the same deep and dark secrets, although recently a light has been shone on the behaviour of music artists in the past decade.

The eyes and ears of the music industry have remained shut when it comes to holding R&B/Hip-Hop artists accountable for their actions. Simply proving male privilege exists especially within the black community.

With the tear down of Harvey Weinstein and Bill Cosby’s legacy’s, the countless sexual assault allegations have encouraged more women to speak out.

For decades young black males in the US had looked up to Cosby due to his success. Outside of his real life, Cosby’s black male father figure role on the sit-com The Cosby Show encouraged the positive representation for black men.

Black men had been misrepresented in media, scapegoated, labelled as lazy underachievers and criminals; the positive image that Cosby wanted young men to carry, shed another light on black masculinity.

Other than Cosby a number of black rappers and singers have had allegations against them. Be it for sexual assault, rape and other crimes. Most female victims have dropped cases simply of not being believed.

Artists have large fan bases, and fans tend to negatively label women by calling them “gold diggers” when they end up in unfortunate situations with these artists.

They often go as far to assuming the woman involved are making false accusations. This often leads to women receiving online hate, the lack of support they feel only reduces their faith in the judiciary system, or that they would win a case.

Almost every industry has been male dominated, the music industry included. Leaving room for sexism and inequality to thrive. Women have long been pigeon-holed as sexual objects rather than performers, artists and writers.

Male artists are praised for their talent and their misbehaviour and crimes are disregarded. There are several examples where male artists have not been held accountable for their actions ranging from criminal activity to sexual assault and abuse.

Hip-hop has always had a tumultuous relationship with women. In July 2017 Rick Ross made some controversial statements in a interview for The Breakfast Club, saying that he has never thought about signing a female rapper “because I’d end up fucking them and fucking the business up”.

Words reminiscent of Boogie Down’s 1987 lyrics, the dig at Juice Crew’s queen Roxanne Shante. The sexist diss became one of the most famous lines in diss song history. An explains why rappers use sexism and objectification of women so frequently and freely.

Is there a reason the black community refuses to condemn and hold black male artists accountable for their actions? Especially when they encourage the negative perception of black males?

Many women have endured “misogyny, sexism, constant bullying and relentless abuse,” said Madonna in her ‘Woman of the Year’ speech at Billboard spoke about “women playing the industry’s game”. There is a heavy sexualisation of young girls in order to be successful, as Madonna put it: “you’re allowed to be pretty and sexy but don’t act too smart.”

Women in the music industry have had to become over-sexualised in order to succeed. A few great examples are Britney Spears and Lil’ Kim who got there big breaks at 18 years-old, but Tinashe and Cardi B experienced the same ordeal in 2017. Women are continuously encouraged by their labels to sexualise themselves in order to sell records.

As hip-hop developed through the decades, women continued to be thrown into the centre of male-driven rap wars. Kathy Iandoli at Complex explained that, degrading women has long been a trend “from ‘Yo mama’ jokes and lewd suggestions that someone’s girlfriend was being passed around.”

Women on the other hand are often shamed for embracing their sexuality and not conforming to society’s expectations. Female rappers are rarely credited for their work. Nicki Minaj in all her nominated wins spoke about not being able to catch a break, from people claiming she used sex as power moves.

The group-solidarity the African-American community has, may include hidden terms and conditions such as not holding male black successes accountable for unacceptable behaviour.

The great debate of “separating the art from the artist” is often posed when “our faves” do problematic things. Kanye West was known for behaving wildly on social media early 2016 before the release of his album The Life of Pablo. 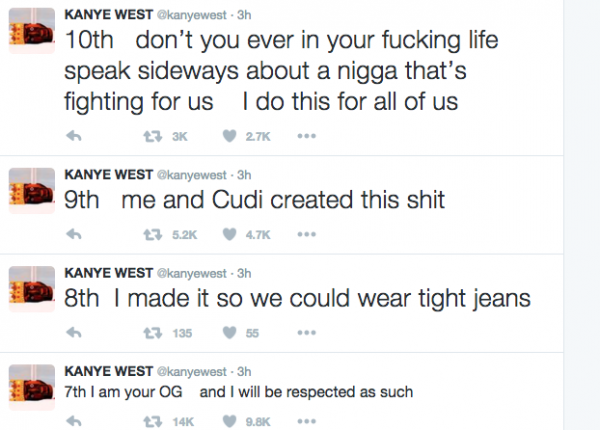 Chris Brown, Kodak Black, Rick Ross, XXXtentacion and more have all made wild remarks regarding women of colour. But while social media becomes outraged these artists’ large fanbase remain.

There is a continued support, from radio play, bookings and deals of all kinds, the men are favoured when they mess up, thanks to being in a male-dominated industry. This can also mean that when there’s an issue involving black men and black women, black men are more often favoured.

In yearning (race, gender and cultural politics) Bell Hooks explains that the black liberation movement supported and perpetuated sexism and male domination. When the Rap genre usurped Jazz and Blues it was an outlet and an outcry for young black males to testify their experience as the underclass.

They were allowed to develop a critical voice, they used sexism in their music to incite fear. Rape was glamorised as a form of the black man’s weapon, it was used to express their rage and struggle for power, (that reverses their circumstances as the dominated).

Many black females rejected that paradigm, but those that wanted to support feminism in response to sexism were considered traitors to the expression of their men.

Today in black dominated genres, like R&B and Hip-Hop it has yet to be rejected by most black men (pop artists). Most black men especially artists, hold on to the idea ‘that the trauma of racist domination is really a loss of black manhood’.

The cycle of the racist narrative that perpetuates the idea that all black men are rapists only continues. Giving them a pass when they’re eager to use sexual terrorism to express their rage.

Identifying the central issues of black male privilege is one thing, but why has it continued for so long?

Black men are so often used to being under attack. When it comes to being held accountable for the actions we may let one assault charge slip through the cracks.

Black men encourage guy talk conversations they have about women and often, defend themselves with a fixed mindset that implies we should be forgiving of such actions because “look at all the ways in which I’m oppressed” outside of music.

All this does is deflect the opportunity to build a stronger community. Robbing black men of a chance to actually take hold of the attributes that they have so that we can empower the community.

Ignoring certain genres of music or cancelling hip-hop won’t change the fact that misogyny exists in the world. Misogyny still exists outside of music, women are still cat called when they walk down a street and can get sexually harassed at their workplace.

Instances like such do not involve rappers; none of them involve hip-hop. Suggesting never listening to R&B or Rap wouldn’t ensure women never experience misogyny again. Educating young people about sexism and it being wrong is a starting point to stopping sexism and future sexual harassment. People speaking out against it causes a serious effect today.

Hollywood has been under fire for the sexual misconducts that has gone on behind the scenes. Women all over have come forward about the sexual abuse and inequality they have experienced in order to have successful careers. The music industry should join the wave of providing equal opportunities for females in the music business.

By Rella Jefferies
4 Mins read
Frida Kahlo, the most celebrated Mexican artist, has been heavily misrepresented and appropriated following her death.
Music

By Taysan Ali-Osman
8 Mins read
We profile up-and-coming rapper V.I.C on his success and where he plans to move forward with his music in the near future.
Music

By Stella Schmieder
1 Mins read
In the second podcast of this series, we talk about how the music industry has shifted and what disadvantages artists could encounter on social media.