The oral art of the 21st century

She breaths in deeply and heavily gasps.

Her hands twitch, yet the voice is crystal clear.

An emphatic flow of rhyme and power commences.

The passion and the authority fill the room, turning the spotlight on her and emphasising Desrees’ every word. It is incredible how a speaking voice, so softly at that, can mesmerise and captivate the audience?

In an era dominated by tech-savvy millennials, putting your mind through a pen to the paper is quickly becoming this generation’s DIY self-help session, an old school take on therapy.

Relying on its use of rhythm, slang and improvisation, Spoken Word London (SWL) invites those of any background – no matter what age, sex, religion or ethnicity to come and speak their mind, no matter how controversial it may be.

Poetry is so much more than a hobby to Desree. She has created a lifestyle, which stemmed from passion and talent recognised by her mother at an extremely young age.

During childhood, driven by her vivid imagination, Desree would write little stories and plays, whilst performing her favourite songs in front of the television.

Drawing inspiration from her love of music, as well as her everyday experiences, Desree only writes about things she’s seen and has lived. It makes her work really raw and personal. “SWL wasn’t a choice, it kind of happened,” she explains.

With a background in rap music, Desree explained how she “wanted to rap but without wanting to be a slave to a beat or a rhythm, and spoken word allows you to go with your own rhythm and your own flow – allowing you to speak your mind without having to fit in.”

With its bare, brick-laid walls and alcohol-infused scent, Vogue Fabrics Dalston (VFD), the east London bar infamously known for its outlandish drag nights and experimentation, plays home to the fortnightly event, gathering misfits from all over London.

Spoken Word London was started by VFD’s poet and playwright Patrick Cash; after living in Paris and regularly attending the Spoken Word events there, he wanted to emulate a night that stimulates both the offline and the physical sensations, bringing people to find, or lose themselves – together. They form what can be deemed a ‘lost’ generation.

Fast forward four-and-a-half years since the first SWL was held in the same old liquor-scented basement, and the audience room is filled with regulars and newcomers, all in attendance to listen, or to be heard.

“The key thing we find enjoyable about SWL is the mix of comedians, poets, rappers and prose writers that we attract,” says Hannah Gordon as she stands, paper and pen ready, to welcome the eager, animated queue of prospective performers waiting for the doors to open. It’s a gargantuan difference in comparison to the handful of people huddled in the basement some years ago.

Hannah, co-host and organiser of SWL, describes how by retaining the inclusive ethos as it’s heart, “SWL remains a welcoming, safe space for people to share their writing.”

There are four 20-minute rounds, each round a five-reader group being given a five-minute platform for each of them to speak. Sticking to this format has allowed an equality to continuously run the event, establishing SWL in its position today.

What makes it even better is that it’s completely free. A small fee of 10 per cent of the bar’s takings from the night is used to pay for a local photographer and the hosts’ travel costs. SWL has kept its minimalistic traditions purposefully, allowing all attention to focus on the performance itself. 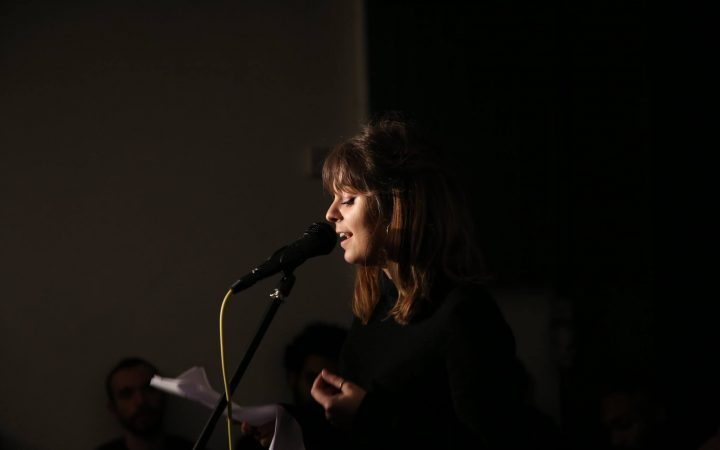 Sipping on her green matcha latte, Tala sits, scribbling her emotions and mind fucks down in a little notebook. Her ashy blonde locks hide away her face.

Tala has come a long way from the girl I first met two years ago when I moved to London. Having had a hard time talking about her feelings, as a four-year-old Tala would carry a notebook around, writing little stories and sentences engrained from her Mum.

Her mother was a huge influence in her life, and used to write herself. “I’ve always had a joke that if I was to ever release or publish a book it would be titled ‘Things I Could Never Tell My Mum’, not because she wouldn’t want to listen but more the fact I didn’t want to burden her with my issues.”

Using poetry as a way to deal with her crippling anxiety, Tala writes about her interactions and experiences with others. It’s a way in which she can be honest about herself and how she’s feeling, and to not bullshit the reality of it.

“Spoken Word itself is such a comforting place. The environment itself is so small it verges on claustrophobic, in a way which you’d think would be intimidating, and daunting. But it actually allows people who haven’t felt like they’ve ‘fit in’, or felt like they can’t be talking about their problems, because people won’t get it, or won’t appreciate it to have a voice”.

Nathan D’Arcy Roberts, a stand-up comedian, holds a special place for SWL as it’s where his performing virginity was lost and for that he’ll be eternally grateful. “SWL is a venue that is defined by how supportive it is. It’s a place that encourages vulnerability, artistic expression, and community,” he tells us.

The basement transforms into a warm and welcoming place, with a home-like atmosphere among like-minded people. A rarity in itself, it may be the only place in London he found to be like that.

Enjoying the catharsis that comedy allows (and trying to forget how cliché that may sound), Nathan’s sketches combine his personal experiences, using comedy as a linguistic device to convey actual issues and troubles he’s faced.

Some of his best material comes to him on stage, when his mind, enwrought with the darkness, turns to a standby mode. It’s hard to say for him what specifically inspires his ideas. “If I knew that, I wouldn’t be rubbing that genie lamp incessantly to cure the countless hours of writer’s block” which, yes, is a real thing.

Describing the SWL audience as affable yet very direct, he says they’ve helped him to develop as a performer. He was using their response as a barometer to locate any blind spots in his work that should be ironed out.

“SWL is where I realised that comedy is what I wanted to do – they’ve helped me develop from a reserved performer who couldn’t hold a mic properly – let alone make an eye contact with the audience.” Now he can work a mic on a stage with ease, at the very least blindfolded.

Some, like Tala or Nathan, are using the space and the audience as a catalyst. Tala says: “I think it’s something people shouldn’t take for granted, and everyone should experience that whether you write or not. It’s definitely changed me”.

She validates how much confidence she has gained over a few months. The reading of her first poem in January she describes as a “more of a therapy session” compared to her second reading in March, which was much more owned by her as a poet, as she gained feedback on her new material.

“It’s definitely one of the scariest things I’ve done because you’re so vulnerable. However, I can’t express how important it is for people who write their own material, and are as self critical as I am, because it changes your mind set, and I don’t think I’d be posting my poems on social media if I hadn’t made that crucial transition.”

In a generation defined by an egocentrism and narcissism, it’s very easy to feel like your voice is being forgotten. Besides, many young adults fall under the impression that their feelings and emotions are becoming invalid, not serious enough to be dealt with.

Spoken Word teaches both its audience and performers it’s the voice that matters, regardless of how relevant or not the issue is. “It’s a release. The process of writing itself is a release and allows you to structure your own thoughts. Even down to the performance itself, you can have a million thoughts in your head but as soon as you say them out loud they become real,” explains Tala.

SWL embodies a room full of strangers who might not necessarily agree with what you’re saying, but you will have that one person who will resonate with you. “It creates the situation,” she says.

With Tala gaining enough confidence to share and start her own online poetry page, Nathan’s constant development as a performer in his niche, and Desree producing her first self-published collection of work called I Find Strength in the Simple Things, SWL embodies the oral art of the 21st century.

To find out more on the poets interviewed, follow their social media down below