What you learn from living with an addict

Sat in the complete silence of the darkness, almost crippling thoughts of concern quickly seep in. ‘I hope my dad’s okay.’ ‘What if I wake up and he still isn’t back?’ ‘What if he doesn’t come back at all?’ ‘What if it has finally killed him?’ At the age of twelve, and being a self-proclaimed Daddy’s girl, wanting your father is inevitable, regardless of how independent you want to believe you are.

Not having eaten for the last two days, for worry of where my father was, I wander over to the fridge. The realisation suddenly struck and I stood absently staring into it – I hadn’t managed to pick up any food for us.

The cat comes bounding towards me, meowing and rubbing herself up against my legs begging for food too. Any food in there would have gone off anyway. No electric. The thoughts of food subsided, into the need of a clean school uniform. Wandering into the bathroom, gathering my dirty laundry on the way. The cat still up around my feet. The taps splutter out freezing cold water – no gas either.

Tin foil, rusting, bent-up spoons and homemade crack pipes were beginning to seep from their once cosy hiding places. Not knowing what to do with myself – for the lack of gas and electric prevented any form of cleaning – I lumbered into the living room and ripped out a portable CD player from my bag and shoved my headphones in. The device never leaves my side while my father was around, for fear it would be sold to help fund his habit. Pink was what was left in the device. The I’m Not Dead album left on repeat until I finally fell asleep on the couch.

Not knowing what time it was, an echoed crash loud enough to distort the music awoke me from my dreamless sleep. Hurtling through the front door was my father, covered in dark stains and screaming for help.

Panic-stricken as always, I phoned an ambulance – something I should have anticipated. As the medics arrive, I watched them rush him through the big, luminous yellow doors. A sick bucket in my father’s hands, now full to the brim with blood. The doors shut, and they were gone. Once again, I was left with my nightmarish thoughts.

For me, these are just memories of a childhood stripped away. A kind of childhood that is dominated by the unpredictability of a parent suffering from a degrading and dangerous drug addiction. Unfortunately, this type of childhood is rapidly rising here in the UK.

In the year 2015/16, a study by the NHS reports that one in twelve adults in the UK has issues with illicit drugs, if not a full-on addiction. That equates to around 2.7 million adults suffering from some form of issue with substances; with this kind of addiction affecting 14 per cent of children under the age of two, 12 per cent of children between the age of six and eleven, and a further ten per cent of young people between the ages of 12 and 17. 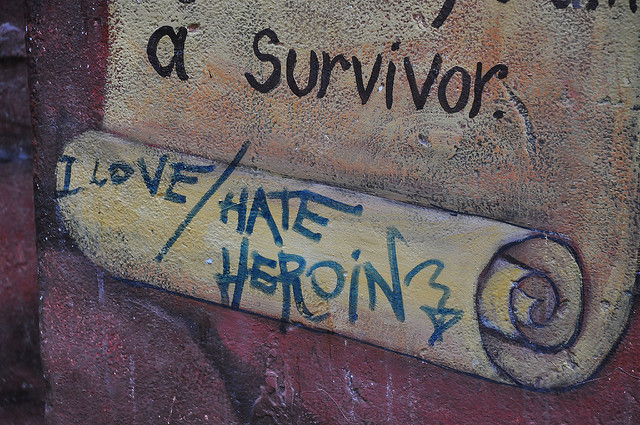 For those too young to understand what an addiction is, it is easy to claim that it isn’t affecting them at all. But as a young person, who is fully aware of what is happening, and the ultimate fear of the loss that it can bring, has a significant, detrimental effect on their mental health.

Now a university student, 19-year-old Kesia, speaks openly about her fears of living with her father, who is battling an addiction. “It is a constant battle between love and hate. It is so hard to see somebody that you love so dearly, destroy themselves voluntarily,” she tells Artefact.

“It puts a strain on your relationship sometimes, and it is difficult to understand when you are not an addict yourself.” It is the irritation, as Kesia explains, of not fully understanding why an addict would deliberately take such a harmful substance.

Like most, Kesia fears falling asleep, because she does not know what will be there when she wakes. “I think that the biggest hardship was always going to sleep and not knowing whether you’d wake up peacefully, or whether you’d be woken in the early hours of the morning, by paramedics crashing up the stairs and into the bedroom next door. There is a great fear of the unknown and a great fear of potential loss,” she explains.

For 53 year-old Laraine, who has also seen what addiction can do, it was difficult watching her friend deteriorate, while knowing that if he didn’t manage to ask for help, he might not only lose his life but his child too. “He managed to stay sober for eleven years, before going back to the drugs,” Laraine told us.

“His Mum was diagnosed with cancer in 2006, and she hands down blamed him for her illness. When she died, he simply had no idea how to deal with what happened and went back to the drugs. He held the blame and just couldn’t deal with the guilt. He believed that he had killed his Mum.”

“It’s dealing with continuous lies … What’s worse is that they believe the lie themselves.”

“When he was alive, he would tell me that he ‘wishes he could stop’, but when he asked for help, the GP said they would have no choice but to get social services involved, and losing his daughter was more terrifying for him than the actual addiction. I think his daughter was the only thing keeping him going. Unfortunately, the addiction was too much for him, and he lost his daughter anyway. It’s been ten years, and I still miss him and his quirky ways,” Laraine concludes.

According to the Office for National Statistics (ONS), the year 2016/17 has seen a rise in the number of individuals killed due to drug-related issues. In England and Wales, the number of people killed by substances, including legal highs, continues to rise at an alarming rate.

The ONS reported that in the last year, 3,744 people died because of substance abuse. Despite legal highs becoming a common killer amongst young people; cocaine and heroin remain the biggest killers among those with substance-related issues including active addiction.

Having witnessed the effects of drugs first-hand, there is no doubt that drug addiction has the largest ripple effect on all aspects of life. It causes parents to outlive and mourn the absence of their children. It causes nieces and nephews never to meet their aunties and uncles. It causes resentment between siblings, which causes bitterness to erupt. It causes an absence before an actual exit because the addict is just not there anymore, and the harsh reality is that you will someday lose them altogether.

It causes things to collapse, break and fall like little shards of glass, like the law, trust and family units. Drug addiction causes families to become terrified of the ring of a phone or a knock at the front door, just in case it is ‘that call’.

It doesn’t matter if you have come from a stable, loving family, or a family that is entirely shattered. You learn to hate the drug but love the addict. You learn to separate the one you love from who they were to who they are now. Drug addiction doesn’t care, but you do. You do care. 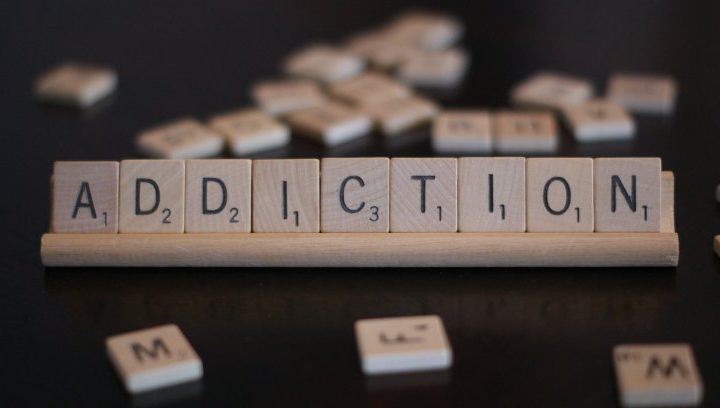 Addiction is more than just a word [Flickr:Airpix]

For 49 year-old Julie, her brother’s addiction caused much heartache, bitterness and tensions within the family. His addiction started in the early eighties, with lengthy periods of soberness. He went on to get married to his long-term girlfriend, and had a daughter, yet he relapsed in 2006, which lead him to lose his life in 2008.

“When someone you love has an addiction, you find yourself trying to block it out because you don’t want to believe it or accept it,” Julie explains.

“You feel as though you have to carry on as normal so that your school friends, teachers, workmates and family members don’t realise that you are just completely falling apart. It’s dealing with continuous lies, and in the end, you don’t believe a single word that they have to say. What’s worse is that they believe the lie themselves. They steal from you, steal from your friends and then they deny it, blaming you until you start to doubt yourself,” Julie explains.

“Back in the 80s, the ‘in thing’ to have was a gate bracelet, so I saved up all year so I could get one. As I worked in a factory and liked going out clubbing on the weekends, I only saved a couple of quid every week. I only wore my gate bracelet on the weekends, but it was my pride and joy because I saved so hard for it. One week I went to put it on, and only the clasp was in my jewellery box. After about a month, my brother admitted that he had sold it for £10. It had cost me £100. I was devastated.”

For Julie, what got to her the most was his relapse, when his daughter was only two months old. Her brother had arrived at his parents, where Julie was still living at the time and asked if he could stay the night to clear his head after an argument with his girlfriend.

“He came round and asked if he could stay a few nights because it wasn’t working so good with his girlfriend. Mum said that he should go back home as he had a new baby to think about, but he didn’t, he stayed. He went upstairs, and after a while, I could hear Mum shouting. I came out of my room, and there he was, completely naked, with a needle sticking out of his arm. He sat there telling Mum that it was the best feeling in the world and drugs were all he needed.”

“It is so hard to see somebody that you love so dearly, destroy themselves voluntarily.”

Like everyone, Julie wanted her brother to get well, but for some, it isn’t that easy. Mustering up the strength to leave a life of addiction behind, is such an accomplishment for those who are consciously willing to get sober.

Despite this, according to Elevations Health, addicts are more likely to hinder their progress in their recovery or relapse in later years. Staying positive is each individual’s own personal journey, one of which many struggle with. If there is a bump in the road, it is often down to the addict unable to overcome or accept their troubles, while twisting situations into adverse portrayals of their own emotions.

Elevations Health explains that, when this happens, addicts will fall back into habits that only occur with their addiction, which means they aren’t ready to receive treatment and become sober. Unfortunately for almost half of drug addicts, this is something of a continuous narrative.

A narrative felt hard by the loved ones of those slowly destroying themselves for a substance that will never love them back. For those who manage to help their loved ones in recovery, is an achievement well deserved to be celebrated. Recovery is as ugly and distressing as the addiction itself. Neglecting yourself in order to help someone you love, is as dangerous as the drug itself.

A simple conversation can be the difference between losing your loved one altogether or helping to benefit both the life of your loved one and yourself. So take that step out of the darkness of addiction and into the unknown light that is professional help.